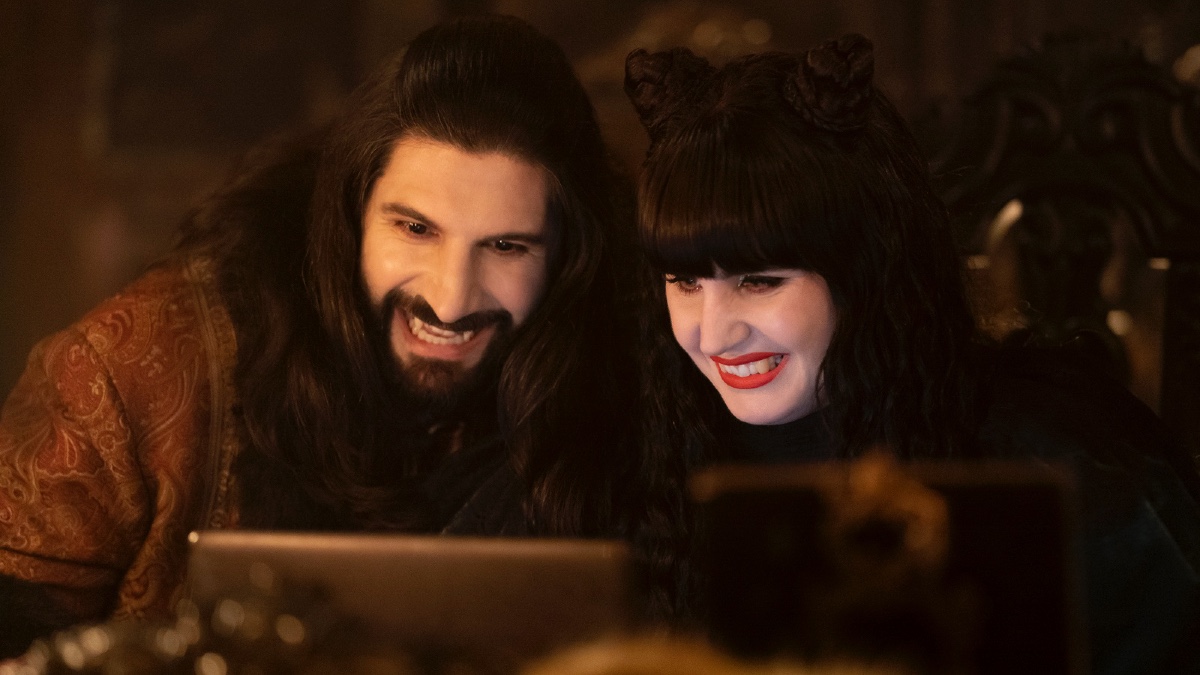 What We Do in the Shadows Season 3 Episode 7

What We Do in the Shadows season 3 episode 7 “The Siren,” is one of the most touching installments of the series. Colin Robinson (Mark Proksch) has experienced brushes with romance before, but because it was with another psychic vampire, it turned into a power play, with little foreplay. Tonight, we see a much more vulnerable energy sucker, who may or may not be falling into a lethal trap, but it is a prison of his dreams.

The episode dives right into the action. After less than a moment’s consideration, Laszlo (Matt Berry) changes into bat form to attack a small group of water enthusiasts on what looks like a Chris Craft runabout. The weekend cabin cruisers are no match for the ancient mariners. The exchange is quite violent and the gushes of blood can be seen from docks away. It is quite a pirating maneuver as Laszlo boards the ship in a one-man army and claims the skipper’s seat for himself. Colin immediately designates himself as first-Gilligan.

The sequence is interesting because we haven’t been given much feed-time during season 3. The vampires have been rolling headlong into their exploits and left the majority of their dinner plans off-camera. it’s a relief to have it return in the form of a violent takeover rather than a mind-feebly. We learn that Laszlo, in his former life, was quite the seafaring adventurer, scrubbing poop decks on sloops, battleships, brigantines, and even “the Titanic for two seconds.” As a captain, he plundered ships, plowed through prostitutes, and dueled on deck with some of the most daring buccaneers of his day.

What We Do in the Shadows doles out information on the vampires’ past on an as-needed, utilitarian basis. This occasionally gives the impression there is a possibility the vampires are making things up as they go along. The truth usually lies in between the claims and the reality. We learned the implausible story of Laszlo’s car was no fiction, but we also plainly see why he shouldn’t drive. We might not believe he was a barrister, high on the Lower Courts of England, but accept it as we witness him lose case after case. We have no reason to doubt Laszlo’s maritime experience, but his prowess is forever questionable.

They steal the boat to take Colin to, where he believes is, the origin of his psychic energy vampirism: a government-controlled animal research center on Plum Island in Gardiners Bay, off the coast of Long Island. But they get caught up in a drift. “Haul ass, smoke grass, let’s go,” Colin exclaims under the sway of the episode’s titular Siren (Catherine Cohen), whose call sounds so familiar, yet like nothing he nor Laszlo have ever heard. It’s a little ambiguous whether the Siren is a mythical creature of old, or a hideous miscreation spawned by the Island of Dr. Moreau-ish Plum Island. Who knows what the USDA is putting in those corn flakes?

Nadja (Natasia Demetriou) and Nandor’s (Kayvan Novak) idea of power-sharing, as co-heads of the Vampiric Council, is based on the Israeli/Palestinian model. It is the least effective council since the rule of Padook the Deranged, who shared his leadership with a talking footstool, Dark Shade (Kristen Schaal) complains. Nandor and Nadja split leadership duties by ruling on alternating days, and the Floating Vampire spends most of her time undoing the prior evening’s work for the new leadership’s commands. Ideas like blood ice cream, and a vampire carnival sound fun, but are ultimately unworkable for a species which keeps in hiding. What Dark Shade isn’t hiding is her ever-growing obsession with Guillermo (Harvey Guillén), who is relegated to a minor player after he’s done being toyed with.

But the disembodied-spirit-of-the-long-dead-Nadja-figurine’s arc is also the cutest of the series, befitting her place as a doll. This is especially true when Doll With the Spirit of Deceased Human Nadja Inhabiting It heads out into an uncertain future, with a hobo bag tied to a pole like some Little Rascal runaway in a Peanuts cartoon “37 wives and you still cannot read the room when a woman needs some attention,” Nadja tells Nandor when he thinks the living doll is stuck under a couch. The fight between the doll and Nadja is less about playthings and more about common courtesy and respect.

An intimidated Nandor notes that Nadja “is having a heated debate with an identical version of her own mind,” and her conversational mood swings are glorious. She tells Guillermo to find that “sweet little stupid bitch of a doll,” and gives all manner of contradictory instructions, as conflicted as Nadja is feeling. Demetriou lets her evolving emotions slip out slowly, letting the self-doubt and self-interest collide in a slow build.

Of course, the runaway is found in a department store, it’s where all dreaded creatures ultimately go in What We Do in the Shadows. It was only last week when The Sire stopped by. The doll’s motion from mannequin to statue to the labor union scab rat is a fun run.

For such shallow vampires, both of the stories turn out to be surprisingly deep. Written by Shana Gohd, and directed by Yana Gorskaya, “The Siren,” is actually quite sweet. The series has been playing up on the vampires’ true vulnerabilities over the past few weeks. Not just the need to avoid the sun or holy water, but emotional scars which are sadly bloodless and not very nutritious. They make for satisfying comedy though, but run the danger of softening the self-absorbed immortal beings at the center of What We Do in the Shadows.

Why One of Star Trek: The Next Generation’s Worst Episodes Is Still Worth Watching
Why Dragon Quest Has Always Been So Much More Popular In Japan
The Best Super Bowl Commercials Featuring TV Shows
MILESTONE GENERATIONS OFFICIAL TRAILER
DC Movies and TV Shows: Full DCU Schedule