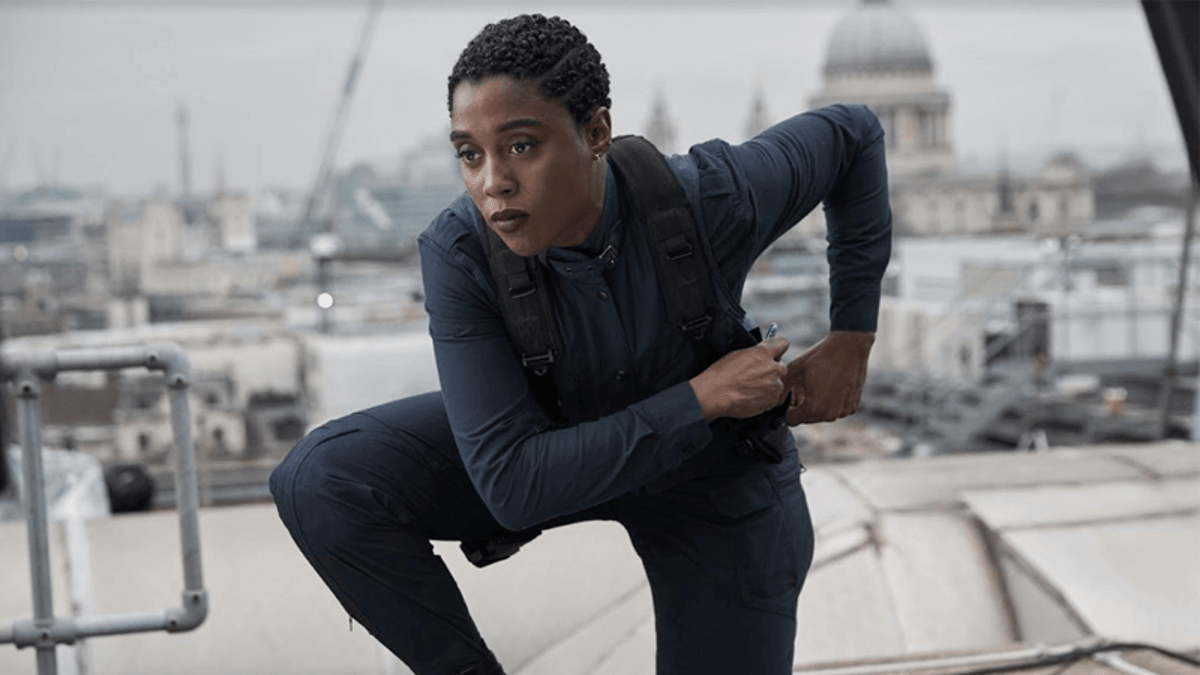 This article contains major No Time to Die spoilers.

It was a surprise when Nomi, the new and chic MI6 agent played by Lashana Lynch, surrendered her 007 codename in No Time to Die. Before that third act moment, she’d made a point of fiercely carving out the designation as her territory. She even delighted in the way everyone at MI6 called her by that title in front of old man James Bond. If handled in a different era, or by different actors, this all might’ve played as antagonistic or unlikable, but in the case of the dynamic between Lynch and Daniel Craig, and in director Cary Joji Fukunaga’s hands, it was deeply entertaining. Playful, even. You might be back, but I’m not going to rollover just because of your legacy.

Hence why it seemed somewhat inexplicable when she volunteered to surrender the number to Bond before their third act invasion of a supervillain’s island, even as Bond had already heartily agreed to start calling her 007. In the theater, I was by then speculating Bond wouldn’t make it out of this mission alive, so perhaps it was a bit of misdirection—if Bond is 007 again, then surely they wouldn’t kill him off, right? And yet, by the time the credits rolled, Bond was dead and the 007 codename was once more vacant. All of which returns us to the question of why have Nomi give it up, and where do they go from here with Lynch’s exceedingly formidable 00 agent?

Lynch is fabulous in the role of 007. Every bit as stylish as her predecessor, but infinitely more comfortable in the modern world—and not just because of her gender or complexion—she has the swagger we associate with the Bond franchise, and few of Bond’s personal hang-ups and foibles. She is not the new James Bond, but she is already a great 007. Yet by introducing her in a film where Bond is killed off, and in a way which demands a hard reboot in a few years, are we supposed to just treat her as one and done? It feels ill-fitting to have her just rollover, again, for Bond’s legacy after an outstanding introduction.

Daniel Craig made hay around the world earlier this year when he said the character of James Bond should only be played by a man—not because men are better, but because there should be parts just as good for women. What he said shouldn’t be controversial, especially since it echoes what longtime Bond franchise producer Barbara Broccoli has already stated several times: Bond is male. It’s even a point hard arguing with since the character has always been defined by his masculinity and narrow-to-a-fault views on women. The Pierce Brosnan and Daniel Craig eras have interrogated that chauvinism, but chauvinism is still a defining aspect of the character.

With that said, No Time to Die has already proven while Bond is male, 007 is not. And as Craig said, “There should be better parts for women and actors of color.” Well, No Time to Die created just such a role for both in the Bond canon with Nomi, who like Barbara Bach’s Triple X in The Spy Who Loved Me, or Michelle Yeoh’s Wai Lin in Tomorrow Never Dies, is his equal. In fact, more than those characters, she’s his successor and can stand on her own without ever getting into his bed.

If Bond had lived in No Time to Die, and perhaps not become a father, it is easy imagining a continuity where Bond did reclaim the title of 007 and Nomi took on another designation. But now that Bond is dead, and No Time to Die’s credits state clearly “James Bond Will Return,” it seems like it’s all for naught. Yet I’d argue it doesn’t have to be.

For starters, Craig’s era may be the most definitive since Sean Connery’s. That is not to say Craig is as good as Connery—or even this writer’s second favorite Bond—but he’s had the most consistent run of films since the 1960s. And after a record-setting 15-year tenure, he is the only Bond a whole younger generation of fans has ever known, from childhood until their 20s. Hence like Connery, it might be harder to quickly replace Craig in the role of Bond.

So why does Bond have to return immediately? The Craig era already featured two lengthy gaps between films of four and six years, a similar absence might make the heart grow fonder before Bond’s inevitable recasting, and create a window where Eon Productions could launch a new set of films starring Nomi as 007 or otherwise.

Producers Broccoli and Michael G. Wilson famously wanted to spin-off Halle Berry’s Jinx from Die Another Day into her own franchise back in 2002, but MGM reportedly got cold feet about spending $80 million on a Bond film not starring James Bond. Additionally, given the assertion producer Barbara Broccoli was “incensed,” one wonders if it was also an early aughts skepticism toward women-led action films which led to the film’s cancellation.

Whatever the case might be, the early 2020s are a different environment, and frankly Nomi is a much better character than Jinx.

Admittedly, the idea of Eon focusing only on Nomi, even for just a few years, is a bit of a pipe dream due to the industrial realities of franchise moviemaking. Producers always need to be cognizant of how popular (and visible) their intellectual property is, particularly in a world where Bond feels like a rarity at the multiplex when compared to the omnipresence of superhero movies. Plus, if the 60th anniversary goes by next year without confirmation Bond is returning and soon with a new face, there’s a chance of unsettling the older fanbase, which could become as troublesome for producers as the fanboys whom Star Wars producers now feel obligated to coddle as if they’re made of porcelain.

So the next Bond will almost certainly be announced in 12 or so months, and with that comes a hard reboot… Still, that doesn’t have to be the end of Nomi. While the character we knew in No Time to Die will likely not be visited again, technically speaking, the Bond producers have already been open to playing fast and loose with reboots, cherry picking what they want and scrapping the rest.

Consider the last time the Bond series had a hard reboot between Die Another Day and Casino Royale (2006). For the first time in the character’s history, Eon Productions wouldn’t pretend it’s all the same guy. Yet even though it was a firm reset, Dame Judi Dench returned as M. This doesn’t make a lot of sense from a world-building perspective. But from the vantage of filmmakers, how do you not include Dench? She was one of the best additions from the Brosnan era and added a skewering female gaze toward 007’s antics.

Conversely, Dench’s M in Casino Royale is the old school Cold War warrior, bemoaning how much better life was for spies before 9/11. Also whereas Brosnan and Dench’s characters had a slowly evolving sense of mutual respect, almost as peers, Craig’s Bond wore the chip of growing up an orphan on his shoulder, which Dench’s M sympathized with… and exploited. She became both a mentor and a mother to this younger, rawer Bond. Dench’s characters even had different civilian names—according to the GoldenEye script, Dench’s first M was named Barbara Mawdsley. Whereas we learn emphatically in Skyfall (2012) that her second M was Olivia Mansfield.

So if Eon’s last reboot could get hazy about the whole Dench returning as M thing, then the next one should do the same for Lynch returning as Nomi—or Naomi for all we care. Just give her a last name and a new 00 codename. If James Bond must return (and he should), then let Lynch get her new designation as 008 or 006. The latter might even give the franchise the chance to reimagine another classic Bond villain, Alec Trevelyan.

The point is Eon has long wanted another franchise led by a woman superspy who can build her own iconography. Lynch’s performance just laid the foundations.

No Time to Die is in theaters now.

Snowpiercer, Infinity Train and Other Erased Streaming Series You Can No Longer Watch
Forspoken Is That Frustrating Piece of Entertainment That Gets Good “Eventually”
ITV Nolly Review: Russell T Davies’ Heartfelt Tribute to ‘Difficult’ Women
FLASH FACTS | Official Trailer
How Did the Cordyceps Infection Start In The Last of Us Games?