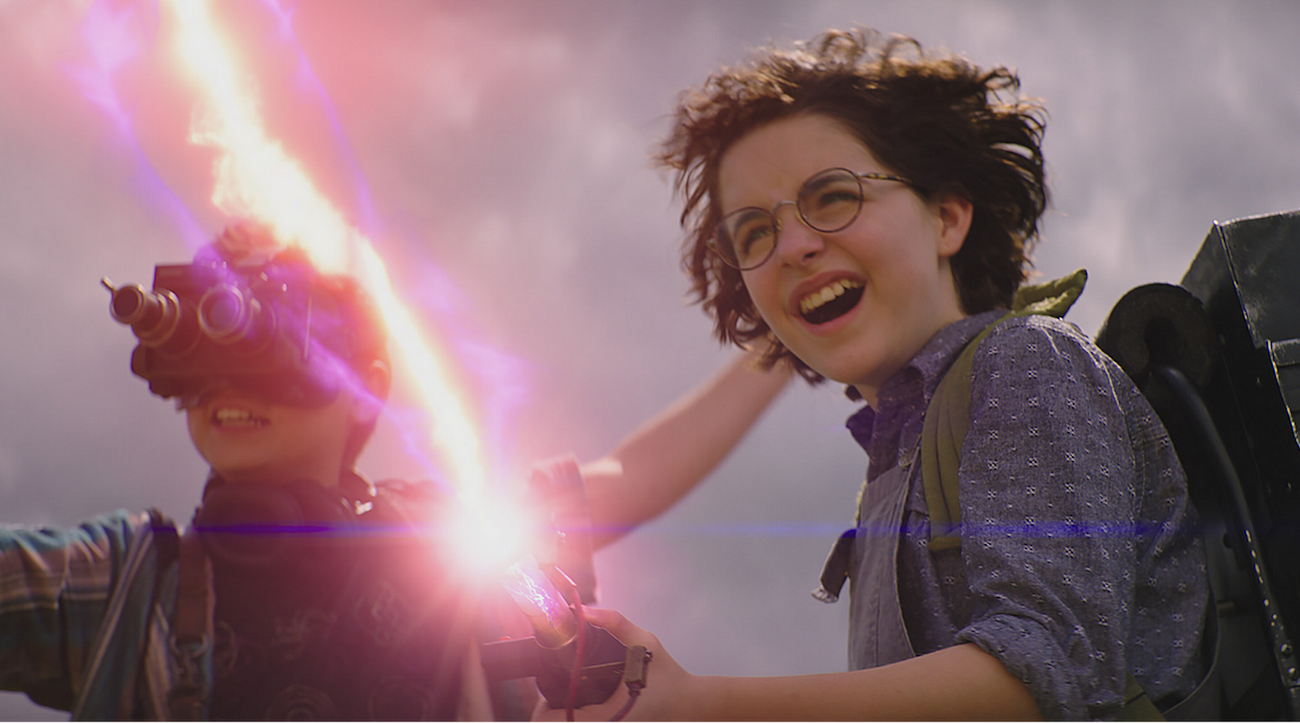 When I first saw the original Ghostbusters, I didn’t get it was a comedy. It might’ve been because I was a shade too young, being about five or so, but when Bill Murray said no human could “stack books like this,” I believed him. Of course they couldn’t. The movie’s sarcasm didn’t come through, but its awe sure did in that moment a proton pack was first fired, as did its shock as a translucent librarian turned into a demonic entity escaped from the mouth of hell.

After watching Ghostbusters: Afterlife, I wonder if Jason Reitman had a similar experience. To be sure, the filmmaker’s relationship to that 1984 classic is much closer than my own. He grew up beside his father Ivan Reitman’s movie, visited the set at the age of five, and lived with its sizable legacy as a perfect comedy. Yet the moments that really sing in Jason’s legacy sequel aren’t the jokes, which are present, or the blatant fan service for admirers of the original, which are a little too ubiquitous. No, where Ghostbusters: Afterlife comes alive is during the simple thrill of a little girl standing in a wheatfield and hearing her proton pack hum for the first time, or when her older brother starts doing wheelies in the grain while joyriding in the Ecto-1.

Technically, that souped up Cadillac is a glorified hearse. Folks who grew up on the original movie consider it a “cool car” now, but at the time it was a gag; a punchline about the original Ghostbusters’ working class means. Nevertheless, in Afterlife it’s associated with the type of all-Americana imagery we usually reserve for pictures about baseball and alien invasions. So, yes, Ghostbusters: Afterlife is a more grandiloquent approach than the original flick. Yet in its most graceful moments, it captures an unmistakable childhood magic. It reimagines who can be a Ghostbuster, and in doing so, succeeds at becoming a genuine crowdpleaser in its own right.

Taking as much a page out of Steven Spielberg’s 1980s films as his father’s own oeuvre, Jason Reitman’s Ghostbusters: Afterlife is the story of a family living out in the boonies long after an unseen father has exited the picture. And he wasn’t the only one. Single mother Callie (Carrie Coon) hasn’t seen her own dad since she was an infant. Now, following the estranged old man’s death, she’s inherited his decrepit farm out in the middle of Oklahoma, and it’s a perfect “murder house,” to quote her teenage son Trevor (Finn Wolfhard). But don’t mind him; the lad’s just bummed that he was forced to come to the sticks. Luckily, his spirits soon lift because of the proverbial girl next door working at the local diner.

The youngest child of this family, Phoebe (Mckenna Grace), has a harder time finding her place. Bespectacled and introverted, she’s aware that no one even acknowledges her dry wit. At least no one alive. While she makes friends at school with another outcast who calls himself Podcast (Logan Kim) and her schlubby science teacher (Paul Rudd), it’s the unseen spirit in her house who takes a real shine to Phoebe, first by playing chess with her, one move per night, and then by introducing her to all his secrets in a hidden basement—including a ghost trap. Just a passing glance at Grace’s mop top and glasses should clue you in on who the spook is, and perhaps what legacy he wants to bequeath.

Arguably more than any “legacy sequel” we’ve seen before, the importance of heritage weighs heavily on Ghostbusters: Afterlife—even burdens it at times. This is a film from a son literally paying tribute to his father’s greatest work, and a movie from a studio attempting to course correct after their previous attempt to resurrect the Ghostbusters brand leaned too far in the other direction, treating the material as just another high-concept setup for improv skits. Well, Afterlife doesn’t make that mistake. In addition to the aforementioned ponderosity of its imagery, there are enough fawning winks and nudges to the old times here to stuff a 600-pound Twinkie. If you’ve watched the trailers, then you’re already aware of the demon dogs called Zuul, walking marshmallows, and can expect other familiar monsters to make encores.

Fortunately, it mostly works because of how winning the new elements are. Unlike certain other legacy sequels which just go through the beats of their predecessors, it’s when Reitman focuses on Phoebe’s family dynamics, and introduces a distinctly more natural and younger sense of humor befitting the filmmaker of Juno, that his version of the Ghostbusters really comes into its own.

Wolfhard, who’s trekked similar terrain before in Stranger Things, thrives at playing the smartass here. He’s too young to be a Venkman yet, but he could be well on his way to a lifetime of cynicism. More winning still are Grace and Kim as the youngest Ghostbusters ever. Grace has been a favorite of Hollywood casting directors in recent years, and here she really gets the floorspace to show why with a sharp script and intelligent characterization by Reitman and Gil Kenan. Never twee or precocious, her Phoebe is always shrewdly inquisitive and has a monotone deadpan worthy of Norm MacDonald. Or Harold Ramis.

That the humor comes from the youngest players—including a scene-stealing Kim as a 10-year-old podcaster—gives new dimension to the sequences where all the old gadgets come back out… not to mention the ghosts. The goofier shtick is meanwhile left to Rudd, whose Mr. Grooberson is essentially a live-action version of Randy Marsh from South Park.

The cast is so good, and the dialogue so clever, that Reitman achieves what appears to be his real ambition: to create an Amblin-esque adventure movie in the Ghostbusters universe. It also leaves you wishing more of that adventure was truly standalone and not forced to flatly follow the path trod before. Because like the quintessential legacy sequel, The Force Awakens, Afterlife is a movie where you’ve already seen the main plot once, and it was more thrilling (and spooky) the first time.

Yet it’s a virtue that when Ghostbusters: Afterlife ends, it leaves you wanting more. Not of Stay Puft Marshmallows or Zuul, but of its own new corner of Ghostbusters mythology, which has been set-up to go its own way. The past is sweetly honored, including by a delicate handling of Ramis’ passing, but for the first time in nearly 40 years, another generation can finally claim Ghostbusters as their own—whether they realize they’re supposed to laugh or not.