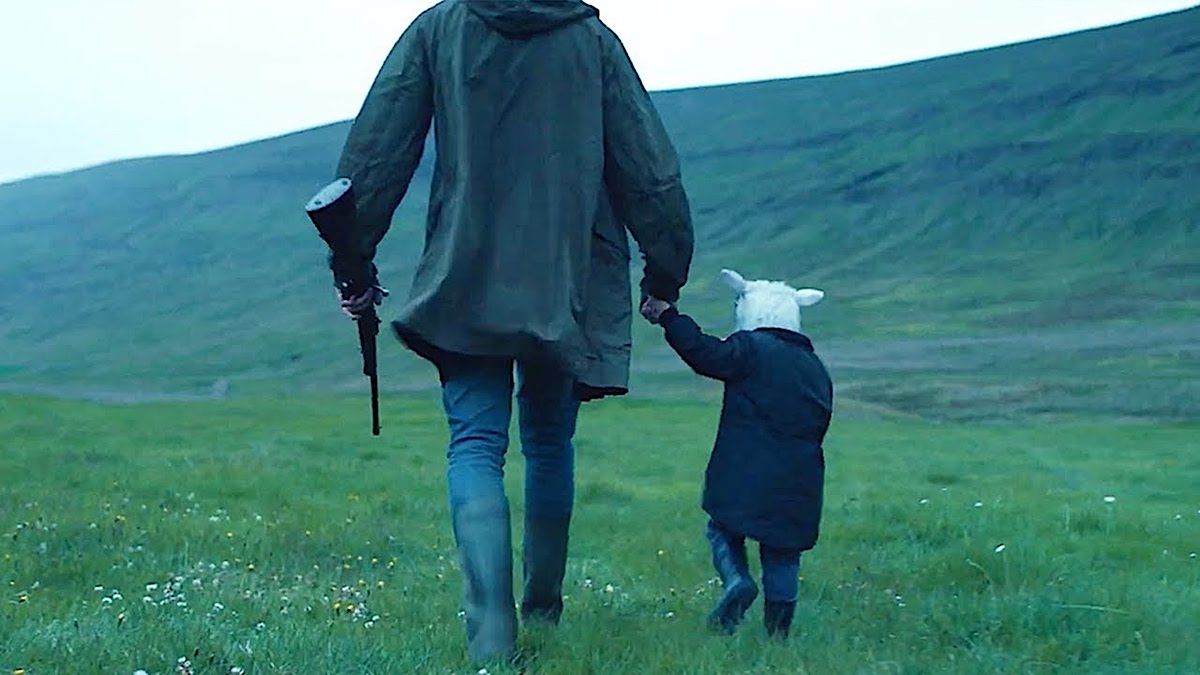 Who is Ada’s father? It’s the question asked in the very first shot of Valdimar Jóhannsson’s Lamb, as an unseen person (or animal) treks through a frigid Christmas Eve snow, looking for comfort. I doubt I was the only viewer to be suspicious about the characters we meet, particularly when brother Pétur (Björn Hlynur Haraldsson) shows up on the farm unannounced later in the movie. Could he be Ada’s father? This, of course, was folly. As we soon learn, Ada’s papa is not the type to knock on doors or ask for permission.

All of which is confirmed in Lamb’s stunning and utterly devastating final moments. Ingvar (Hilmir Snær Guðnason) has gone to recover the family’s tractor while, unbeknownst to him, his wife Maria (Noomi Rapace) is making sure that brother Pétur is placed on a bus, never to return. For Maria, everything now is about protecting her family, and that includes the lamb-human child we affectionally call Ada more than it does her husband’s brother.

And you know what? The movie must be working since we agree with her; it’s best to expel this interloper who would attempt to seduce his brother’s wife. Yet that action turns out to be for naught since Maria and Ingvar’s bliss is nevertheless obliterated by a gunshot from a rifle. Ada’s biological father—an enormous six-foot creature with the torso and arms of a man, but the legs and head of a ram—has returned from the wildness to steal Ingvar’s gun and murder him with it.

In the ensuing chaos, Ada cries for her adoptive father as she’s dragged from his arms. By the time Maria arrives, there is no trace of the daughter she took to replace her original Ada, and there is no comfort left to help pick up the pieces. Ingvar is dead. It is a bitter, bitter ending to a movie that up until that moment had successfully transitioned from seeming the stuff of folk horror to being about domesticity.

Indeed, from the moment Pétur put down that same rifle and accepted Ada as his niece, the horror in Lamb faded completely away, until you could just bask in a family introducing their shy daughter to videos of their uncle’s wild and crazy youth. Suddenly though, the brutality of this world, and the choices we all make to survive it, come crashing back into the foreground.

Why did Ingvar have to die? And why did Ada have to be lost? Well, for starters, mother nature is nothing if not vengeful…

As many viewers likely keyed into, Ingvar dying alone is not that different from the choice Maria made earlier in the film to shoot Ada’s biological mother. When the lamb was born, the maternal sheep wasn’t even given the chance to lick her child’s face. Instead she saw her baby stolen out from under her by a human interloper. So every night, the sheep bayed at Maria and Ingvar’s window until finally Maria committed the unforgivable sin: she took the life of Ada’s mother with a rifle shot to the head.

When we spoke with Noomi Rapace and Valdimar Jóhannssson last month, Rapace told us about the difficulty of preparing for that scene and finding the primal side of herself in the moment.

“On the day, it’s about me or her,” Rapace says. “It’s my baby. I need this to survive. I need this child to heal and I have the right to have it.” It also does not escape the actress’ notice that this action resembles humanity’s own ability to take and take, and then take some more from the natural world under any rationalization.

“We do think we are the superior race on earth, and we do take what we want,” Rapace considers. “So it’s also that. Maria does think that she’s entitled to this lamb, even though it’s not hers. But also Ada becomes the recipe for healing, and when you’re that desperate for life and to be a mother again, I think all tools are allowed.”

Yet as Rapace also admits, the action is like “a curse” from a storybook. If you take take something, something will be taken from you. If you use violence, violence will eventually be used against you. So in a vengeful cosmic sense, Ada’s other father killing Ingvar, which leaves Maria totally isolated, is the world being just. It’s an eye for an eye. And yet, there is also something profoundly different between Maria’s actions and how those committed against Ingvar are presented onscreen….

The Importance of What’s Best for Ada

When we watched Maria execute Ada’s biological mother, it’s ruthless and savage, and even monstrous. But it was also told entirely from Maria’s perspective. As Rapace said, it felt like “me or her” and in the moment, we watch the gunshot from the coldness of Maria’s gaze. We later learn that Pétur witnessed her bury a sheep, not yet comprehending its significance, but we did not see the slaughter from the sheep’s perspective—nor Ada’s.

That is all the difference in the world between a sheep’s death and that of Ingvar. Until the very end of the movie, Ada has shown no awareness that she is of a different species than her adoptive parents, nor has she revealed herself to be merely an animal. In his initial disgust at her existence, Pétur tries to tempt that feral side out of her, proving she is willing to eat grass off the ground. But we also see Ada learn to sit at a table and not just be able to eat like a human, but also think like one.

When Ingvar asks Ada to turn off the radio, she obeys like a dutiful daughter, displaying a keen self-awareness and intelligence to understand the Icelandic language and her physical space in that world. She similarly reveals a human child’s natural bashfulness when she witnesses her parents get drunk and party with a man who is still somewhat a stranger to her.

And in the moment of Ingvar’s death, we see his murder not through his eyes, but through the equally terrified gaze of Ada. She doesn’t want to go with her “father,” because the only father she’s ever known and loved is bleeding out right in front of her. She is more human than animal, and the grim magic trick of Lamb is it convinces you to see things from her perspective—to worry about the well-being of the child and the well-being of this family whose joys and tragedies have been normalized. Ada is better off with Maria and Ingvar than she is with whatever that primal thing from the wilderness is. Which makes her fate as tragic as that of Maria’s.

To understand that dynamic better, Rapace tells us she did a lot of reading about Patty Hearst and general academic studies of Stockholm Syndrome.

“When you kidnap a child, and they grow up in a family, and then they get brought back to their real parents, is that good for them or not?” Rapace asks. “I was doing a lot of research on the psychological aspect of a kid who’s been growing up in a family that’s not theirs. And I did a film called Angel of Mine, and it was based on a true case, and in the end, the girl is actually staying in the family where she was abducted because that’s what normality is and that’s what she knows.”

In other words, to paraphrase another, more mainstream movie, that creature might’ve been Ada’s father but he wasn’t her daddy. Or as Rapace says with a laugh, “Ada should’ve stayed with us, that’s my conclusion!”

But Who is Ada’s Father?

That above question still lingers over the movie’s closing moments as Maria is left irrevocably alone. What was that thing which came down from the proverbial mountain, first to sire a child and then to claim her as his own?

Technically, he appears to be creature of seemingly primordial origin from a long a line of Sheep-People. However, his visceral appearance feels less like a reveal of a new species than it does a plunge into the primal muck of ancient folklore. Earlier in the movie, we see Maria reading the story of “Hansel and Gretel,” presumably to vet for whether Ada should hear that as her next bedtime story. However, Lamb itself feels like a fairytale for adults.

When we pose this idea to Jóhannsson, he becomes cagey over how much he wants to reveal about the conception of this creature. But he does offer this much: “It could be about what is happening now, [about how] we treat the Earth.”

Rapace puts a finer point on it.

“We’re so shortsighted and we’re so ego-driven,” says the actress. “Very few of us, including myself, consider more than we can see. Our circles are so small. ‘I need this, I want this! I need to feel good! I need to heal, so I’m going to take something.’ So it’s like a micro-universe of what’s going on in the world.” She also likens it to the nature of Iceland itself, telling us about how she and Jóhannsson were just recently standing on the balcony in his home in Reykjavík, staring at the active volcano they could see quietly seething in the distance.

“You can see lava like coming out of the earth, and that is the nature of Iceland. It’s angry and it’s dangerous.” She then pauses to stifle a grin, “So like be aware of who you fuck with.”

Maria learned that lesson, finding in Ada a bridge to bring her and Ingvar back into enjoying life, as opposed to merely surviving it. But now Ingvar’s life is over, and Maria’s bridge is gone. She wants to live and love, but may be forever lost in the wilderness.

Lamb is in theaters now.

Batman: The Doom That Came to Gotham | Trailer | DC
DC Movies and TV Shows: Full DCU Schedule
The only way you’ll get me to run is if a Allosaurus is chasing me.🦖 #short #shorts #scifi
Comic To Screen | The Sandman | DC | #Shorts
The Witcher Season 1 Episode 5 “Bottled Appetites” | AfterBuzz TV