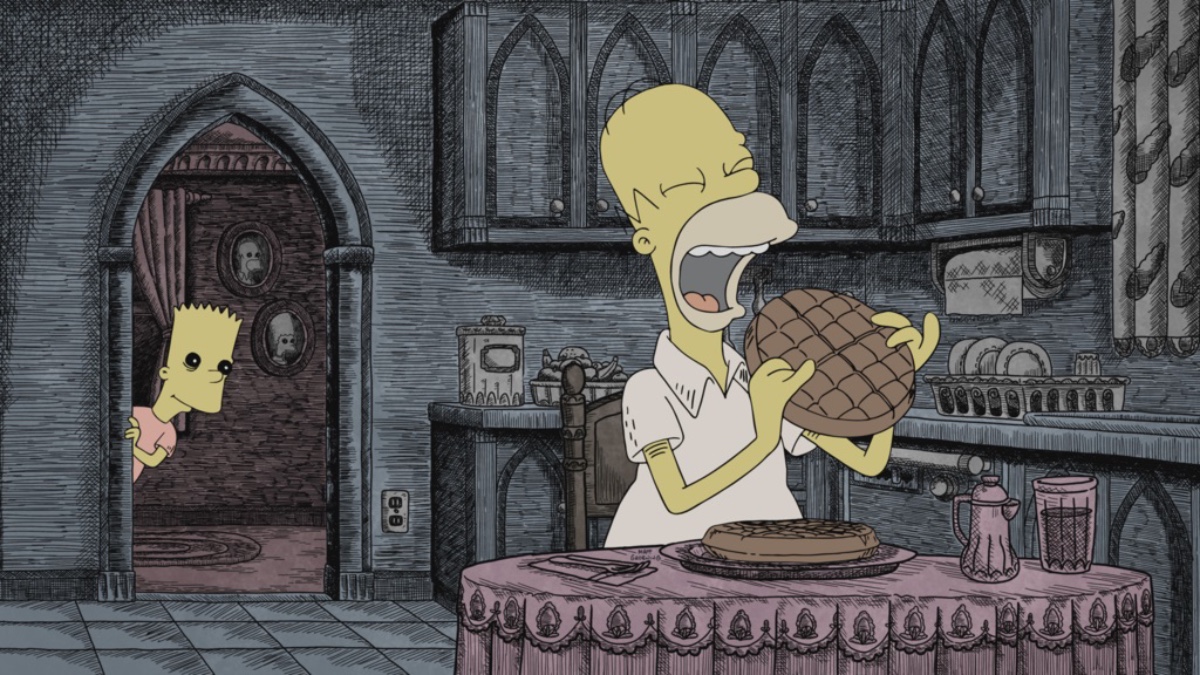 Every year I wait with wonder and excitement for The Simpsons’ Halloween episode. Regardless of the season, it is always the best dark offering. The day of reckoning may be upon us, because if “Treehouse of Horror XXXII” is the high point of season 33, we are doomed. Possibly as a species. This is a recurring theme in several of the sequences, but the joke is on us, and not even over our heads.

“Treehouse of Horror XXXII” proclaims to be the first of the annual episodes to contain five segments instead of three. They usually have two good ones and a lame one in the middle, Homer complains in the episode. But the only real difference this year, is they put titles on the intro and outro, and added a TikTok video.

The opening sequence is a takeoff on the children’s classic Bambi, but this one has a far happier ending. “In Disney cartoons, all parents die,” the accompanying song promises as a Darwinian paradise eats itself up. Deer are indeed herbivores, as the one Homer plays points out. This is a very special day because for the next 24 hours every hunter’s name is Herb. That’s the spiciest line of the evening, and should be savored, because the overall episode does not satisfy the hunger for comedy or terror. It also acts as foreshadowing to “The Nightmare on Elm Tree,” which also needs more fertilizer.

“Bong Joon Ho’s ‘This Side of Parasite’” is a parody of the 2019 South Korean movie Parasite. The Simpson family have all taken jobs at the mansion of the local acting legend Rainier Wolfcastle. His living room isn’t flooded, like the Simpsons’ basement apartment, but his cellar is filled with the families of former workers with “the poor person smell,” and brimming with class resentment. Maggie takes it out on the lawn as the manor’s groundskeeper in an extremely silly cutaway, adding to the character’s surreal mythology.

When Wolfcastle goes on vacation, the Simpsons treat the house like it’s their own, only to incur the wrath of Kirk and Luann Van Housen, who formerly worked the estate, along with all the local parasites who can fit in a boiler room. Class warfare is always funny when we have Mr. Burns to toss around but, while the sequence makes the same point as the film it’s based on, and more succinctly, it doesn’t deliver nearly as many laughs.

“Nightmare on Elm Tree” has its roots in The Day of the Triffids, but branches out into the ultimate environmental terrorist fantasy. It is very self-conscious of its ecological conscience, and actually adheres to the opening segment’s claim about national herbivore day. The trees also look for a replacement for the name Arbor Day, with diminishing returns. The teased story about the little girl with potato bugs in her head has more promise.

While The Simpsons finds unexpected horrors in Christmas tree farms, it appears the trees watch Parasite and unionize. The sequence references Guardians of the Galaxy, and The Wizard of Oz, and contains guest appearances from Little Shop of Horrors’ Audrey, and NBA center Tree Rollins.

The Simpsons dares to speak for the trees in “Nightmare on Elm Tree,” but save the Dr. Seuss couplets for the “Poetic Interlude,” the best segment of the evening. In the episode Vincent Price (voiced by Maurice LaMarche) reads to Maggie from the children’s book “The Telltale Bart,” which was apparently illustrated by Edward Gorey. The sequence is a nod to a bit in the very first “Treehouse of Horror” where Lisa reads Edgar Allen Poe’s “The Raven” to Maggie and Bart. The poem is as gruesome as it is grisly, and family memories get dismembered over a calendar year.

Vincent Price has made quite a few appearances on The Simpsons. He is an iconic figure who has played iconic roles. One of these was as the villain Egghead on the 1960s TV campfest Batman. Price licensed an egg painting kit in the season 10 episode “Sunday Cruddy Sunday.” While the voice here is only vaguely similar, it is very comforting to witness Price’s resurrection.

“The Ringer” is a parody of the horror film The Ring as reimagined on TikTok. The kids at Springfield Elementary have been sharing watches which causes the viewer to die in seven days. Lisa learns about the dangers when the twins Sherri and Terri tell her about their killer birthday party, which she wasn’t invited to. Interestingly, the entire team Lisa puts together to stop the killings are people just like the villainous TikTok influencer. Mopey Mary was an outcast in life, and is inundated with them in life’s bitter afterparty. The ending is far sadder than it is frightening, as the villain ghosts the ones who are trying to help, and the audience longs to join her in the long and lonely trip down the abandoned well. Fully knowing, we are the monster.

“Treehouse of Horror XXXII” was directed by Matthew Faughnan, and written by John Frink. They save the last words for Kang and Kodos, just before the end titles run. The two aliens are miffed that they are only stuck into the last frame, and when one says he’d like to drown his sorrows in the blood of dead babies, the other asks if there hasn’t already been enough blood in the episode. There hasn’t. It barely nicks a vein. The humor doesn’t cut deep enough.

There are a lot of low-ball jokes here, but nothing which really slices. This has nothing to do with cancel culture, heightened sensitivities, or political stances, all of which should be exempt in the creation of any horror comedy satire. It is because the jokes, which come rapidly, are only lobbed. They should be spit balls, thrown with malicious intent, and close enough on the inside to make the batter back off in fear. Instead, the jokes walk, and not in a good zombie way, but more like the most recent episodes of The Walking Dead.

Halloween will be a little less fun this year. “Treehouse of Horror XXXII” feels like Mr. Burns put a rock in our pumpkins and saved the candy for his hounds.

Dead Space Remake Release Time: When Will the Game be Playable?
Junji Ito Maniac: Ranking the Stories From Creepy to Downright Terrifying
The Last of Us: Are the Infected Actually Zombies?
How Did the Cordyceps Infection Start In The Last of Us Games?
Marvel Studios’ Ant-Man and The Wasp: Quantumania | Before