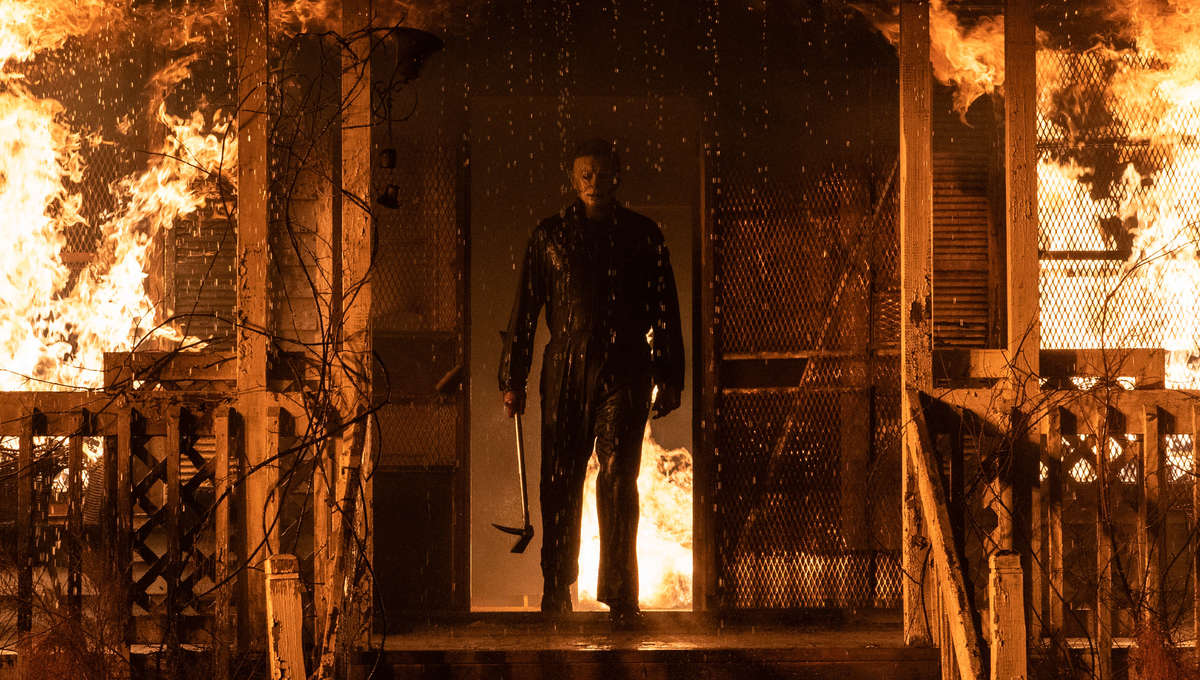 The trouble with announcing you’re going to be making a trilogy of movies is that, well, you have to then make a trilogy of movies. And Halloween Kills, the second part of the franchise reboot, which serves as a direct sequel to John Carpenter’s 1978 classic, is a significant step down after the refreshingly respectful, competent, and creepy 2018 Halloween. “Evil dies tonight” runs the mantra of the Haddonfield residents who are suddenly confronted with the same masked menace who terrified them 40 years ago. Yeah, but it doesn’t though, does it? After all, we know there’s going to be a part three.

Picking up right after the last movie finishes, Michael Myers is on the loose in Haddonfield. Despite Laurie (Jamie Lee Curtis), Karen (Judy Greer), and Allyson’s (Andi Matichak) best efforts The Shape has escaped from the burning basement where we last saw him, slaughtered 11 first response workers (none of whom appear to fight back or try to run away, strangely), and is forging a murderous path through the town. Meanwhile Laurie is in the hospital having been stabbed several times in the stomach.

When the townsfolk learn of the return of their own personal boogeyman, panic sets in. Unwilling for history to repeat itself, they plan to take on Michael themselves. With plenty of flashbacks to the incidents of 1978, Halloween Kills expands the mythology of the whole series (including Carpenter’s movie), and adds extra backstory for some familiar characters and some new ones.

If Halloween (2018) was a movie exploring Laurie’s past trauma, Halloween Kills is about the trauma of a town. What happens to Haddonfield after Myers’ actions put it on the map? What’s it like when the place you live is forever associated with murder? It gives us a chance to check in with characters from the original, including Tommy Doyle (Anthony Michael Hall) and Lonnie Elam (Robert Longstreet) while other returning characters are even played by the same actors who embodied the roles more than 40 years ago, including Kyle Richards’ Lindsey, Charles Cyphers’ Leigh Brackett, and Nancy Stephens’ Marion, who was Dr. Loomis’s nurse. These are cool Easter Eggs, sure, but even these feel a bit like padding.

Everything is bigger in this sequel but that doesn’t mean better. Myers is a one man army, a killing machine who no longer solely relies on his signature knife for his kills. He is relentless and indiscriminate, and his victims are many. Good for lashings of gore but not so good for building tension or eliciting any level of empathy. In some ways, Halloween Kills feels more like a Friday the 13th movie than a Halloween film, with humor peppered between the slayings, and Michael indulging in serious overkill. The Shape doesn’t feel emotion—so hints at anger and cruelty in certain colorful kills are even a bit out of character. But perhaps Myers is dealing with his own internalized trauma…

The nature of exactly what Michael is, is a big part of the movie but even that may leave viewers with more questions than answers—just as well there’ll be a third film to tie up the loose ends, right? That’s the biggest problem with Halloween Kills: it’s just not in any way necessary and therefore feels very cynical. It doesn’t move the plot along; it’s essentially a series of slayings, punctuated by a series of flashbacks, and worst of all Laurie doesn’t really get anything to do. Then the one major set piece which does add a slightly new flavor to the franchise is so signposted that it feels tedious rather than dramatic.

The murders are at least inventive and numerous, so if that’s your thing, Halloween Kills delivers. But when you hear John Carpenter’s ominous score (he’s back again as composer along with Cody Carpenter and Daniel A. Davis) behind the schlocky gore-and-gags action it actually jars.

There are ideas here, and director David Gordon Green has proven he can be a safe pair of hands with this franchise, but this sequel is all filler and no thriller.

Batman: The Doom That Came to Gotham | Trailer | DC
HBO’s The Last of Us: The Changes to Bill’s Story and the “Parallel Universe” of TV
Small Town | Marvel Studios’ WandaVision | Disney+
The Last of Us: How Long Does It Take to Beat the Games?
How to Find a PS5 and Xbox Series X In 2023