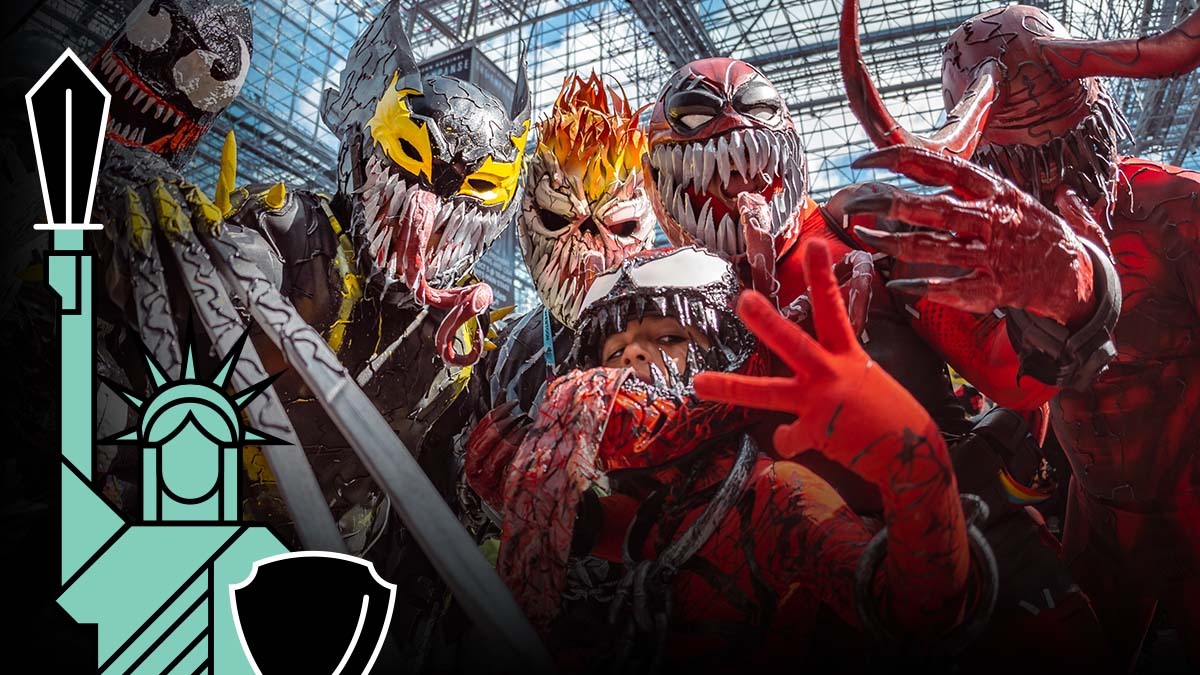 For the first time during the pandemic era, a major Comic Con was held in person, and where there’s a Comic Con, there’s a cosplayer waiting for a chance to display their impressive handmade looks. Mask mandates and vaccination requirements didn’t stop fans from strutting their stuff around the showroom of the Javits Center at New York Comic Con 2021. Den of Geek was on the floor, bringing you on-the-ground coverage and our print magazine featuring an exclusive Dune cover story and the NYCC show guide. One of the more enjoyable parts of the convention for us, beyond spending way too much time browsing which comics to purchase, was seeing all the creative cosplay.

Here are some of the best cosplays we saw each day of the convention!

The first day of the convention featured some Marvel-ous cosplay, including a life-sized LEGO figure of Carnage, fresh off the character’s breakthrough into mainstream media in Venom: Let There Be Carnage. A recreation of the villain Taskmaster, featured in Black Widow this past summer, was also at the Con. DC Comics were well represented, with popular female characters such as Wonder Woman, Starfire, and Raven being featured. A couple dressed as Jawas from the original Star Wars stole the show, while one man dressed as Sokka from Avatar: The Last Airbender disguised as a Kyoshi Warrior dressed to impress.

Day 2 was highlighted by an impressively armored costume of Aries, one of Wonder Woman’s arch-nemeses in DC Comics. Other DC villains were there as well, such as Harley Quinn and Poison Ivy. Some of Marvel’s greatest heroes were additionally present, including Doctor Strange, Captain Marvel, and Thor during his Big Lebowski-esc appearance from Avengers: Endgame. Finally, iconic super-fast hedgehog Sonic stopped by, a Royal Guard from Return of the Jedi and the iconic Predator from the film series of the same name.

Saturday was the busiest day of the convention, and with it came some of the most striking looks. One showstopper was a brilliantly chiseled version of Squidward from Spongebob Squarepants with chest hair and all. Other scene stealers were a crewmember from hit game Among Us, the May Queen from Midsommar in a beautifully detailed flowery dress, Ghost Rider from the frightening Marvel Comic, and a pair dressed as Frodo and Gollum from The Lord of the Rings.

While the convention’s final day is traditionally known for finding the best deals on items remaining at vendor’s booths, more fabulous cosplay creations were showcased as the convention drew to a close. Some of the best looks from our final outing at NYCC included some highly-detailed sets of Mandalorian armor, another Carnage costume with functioning smoke features, immaculate representations of Spider-Man villains such as the Lizard and Mysterio, Geralt from The Witcher, and finally, a massive group of some of the darkest characters from DC Comics lore.

New York Comic Con 2021 was a fan-centered event, with incredible cosplayers lightening up the floor after a long hiatus away from conventions. Outside of the cosplay, you can learn more about our Collector’s Digest partnership with eBay and all the fun exclusives they had at their booth, including this beauty of a variant cover of The Death of Doctor Strange #1 designed by DJ Skee.