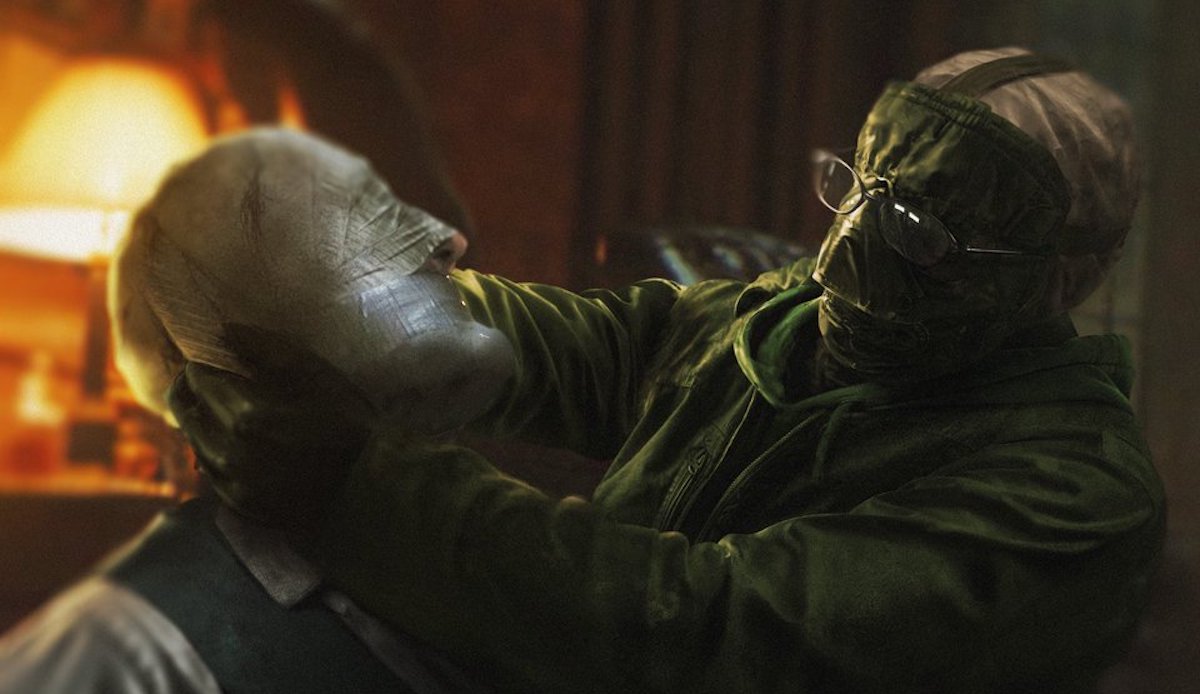 What is he hiding under there? That is typically what the denizens of Gotham might ask in a Dark Knight movie about the Batman himself. But in the new The Batman trailer, the audience are the ones left to speculate about why we never see the face of Paul Dano’s the Riddler, who is only referred to in the new sizzle reel footage as a “serial killer.”

With his taped on mask and oversized glasses, Dano’s Riddler initially looks like something out of a David Fincher movie. John Doe meets the Zodiac Killer. Yet the more we’ve seen of him—and from how the new The Batman trailer even hides what appears to be the Riddler’s face during an interrogation scene—I’m left wondering if there’s a reason for all the mystery, especially in light of the ways this film is clearly inspired by Jeph Loeb and Jim Lee’s Batman: Hush, a 12-issue comic book story arc from the early 2000s. As one of the seminal Riddler and Catwoman storylines from the 21st century, Hush is often cited as a favorite among Batman fans. Now in the wake of the new trailer released at DC Fandome 2021, we’re left to guess if writer-director Matt Reeves is among them.

But first have another look at that trailer:

The Sins of Whose Father?

The biggest clue about the parallels between the new film and Hush comes during a moment in the trailer when Robert Pattinson’s Bruce Wayne—and notably not Batman—stumbles upon a riddle that might also be a crime scene. Shirtless and devoid of his Dark Knight attire, Bruce is filmed from an overhead shot standing in a literal riddle. The Riddler apparently has an axe to grind with all of Gotham’s elites and civic leaders, and so he’s written multiple names in chalk on the floor alongside corroborating photographs. “No More Lies, Colson,” refers to Peter Sarsgaard’s district attorney, who might meet a fate worse than Harvey Dent judging by how one of The Batman’s big set-pieces clearly takes place in a courthouse. “Mitchell” and “Savage” meanwhile refer to Gotham’s mayor and police commissioner, respectively.

But then there’s that last opaque riddle. “The Sins of My Father??” is written on the floor, with a chalk line leading directly to a question mark in the center of the room where Bruce is standing. Notably, there are no incriminating photos accompanying these scribblings. Is the “father” referring to the Riddler’s parent or the Batman’s? Given one of them is (presumably) Edward Nygma and the other Bruce Wayne, the son of Gotham’s last richest city elder, it’s pretty easy to guess. Thus this teases several things for comic book fans:

This would certainly explain the hostility of the Riddler’s messages to Batman in the new trailer, which instead of a funny play on words can be as blunt as “see you in hell.” At another point in the trailer, he promises the Batman that he’ll be “black and blue, and dead all over” before this story is over. All of which echoes the criminal conspiracy in Hush.

In the Loeb/Lee comics, the Caped Crusader stumbles into a criminal conspiracy involving the Riddler and a character he never knew was his enemy: Thomas Elliot, aka Hush. On the page, Elliot and Bruce were childhood friends, at least in Bruce’s mind, with Elliot taking after Bruce’s father and becoming a gifted surgeon. That is until Elliot fakes his death at the hands of the Joker, getting Batman to mourn his passing. In actuality though, Elliot entered into an elaborate plan with the Riddler, who through complicated means had finally deduced that Bruce Wayne is Batman. As it turns out, Elliot also had a lifelong grudge against the Waynes because when he was a boy, he attempted to murder his own parents by sabotaging their car. But Thomas Wayne, the other gifted surgeon and Elliot’s namesake, was able to save the life of Elliot’s mother—resulting in Elliot being unable to inherit his parents’ fortune for decades to come.

It’s a pretty absurd motivation, but it provides the impetus for a mysterious masked villain who hides behind bandages and who engineers Batman’s downfall, including by collaborating with a slew of the Dark Knight’s classic rogues gallery who make cameo appearances. Yes, Penguin is among them.

Interestingly, Hush has been adapted before in several mediums, but it’s never been done exactly the same as in the comics. In the Batman: Arkham games, Elliot/Hush features in a subplot across two games where it is revealed he used plastic surgery in order to look like Bruce Wayne and steal his fortune (which has roots from a different comic storyline). Meanwhile, and perhaps more intriguingly for The Batman, a 2019 animated film released straight to video by DC Animation combined the characters of Hush and Riddler, with the latter still figuring out Batman’s identity and then creating the Hush persona to lure an unsuspecting Batman and Catwoman into his new, more violent game without riddles.

While we doubt Reeves is turning to a direct-to-video animated film for inspiration, it does provide a recent example of the creative impulse to rework Hush into a Riddler storyline that jettisons Elliot’s soapy motivation for vengeance. Although that doesn’t mean you couldn’t create another involving the Waynes. Plus, the Riddler isn’t the only major rogue from Hush who’s prominently featured in The Batman trailer.

Beyond the Riddler, there’s also another significant element from Batman: Hush, which is clearly influencing The Batman, just as it did The Dark Knight Rises, the Arkham video games, and more or less all modern Batman media: the relationship between Batman and Catwoman, Bruce Wayne and Selina Kyle.

While the characters have always had a playful flirtation since Catwoman’s first appearance in Batman #1 (1940), their relationship constantly remained at least vaguely antagonistic. She was the villain with a heart of gold, but Batman always had to put her behind bars or let her escape. That changed in Hush when Catwoman basically became an intermittent partner to Batman. Selina still occasionally moonlights as a cat burglar in the comics, but she more often than not has become Bruce’s confidant and ally in modern lore—and eventually his bride. This all started in the issue of Hush where Bruce dared to take off his mask in front of Selina Kyle. That was the moment where Catwoman fully transitioned from the realm of “villain” to that of antihero.

Since then Bruce and Selina, as opposed to “Batman and Catwoman,” have often been colleagues working together as much as against one another, an element Christopher Nolan certainly embraced in the most recent solo Batman movie. Technically, Nolan even married Bruce and Selina before comic book writer Tom King did the same (kind of).

It remans to be seen whether Zoe Kravitz’s Selina will be as cleanly heroic in The Batman as Catwoman is in Hush, but the new trailer shows her often without her mask and in Batman’s company, including in one shot that appears to be set in a subterranean lair. Could that be Pattinson’s version of the Batcave? Also like the Catwoman of Hush, Kravitz’s Selina is visibly shaken by the sight of how violent Bruce can get while beating a criminal in a rage (which occurs on the page after Batman mistakenly believes his friend Thomas Elliot has been murdered).

This is not to say that The Batman will be a direct one-to-one adaptation of Hush. But just as Nolan drew heavy inspiration from Frank Miller and David Mazzucchelli’s Batman: Year One on Batman Begins, and inspiration from Jeph Loeb and Tim Sale’s The Long Halloween on The Dark Knight, it seems like Hush could be having a major impact on Reeves’ The Batman.

The new film is a story that involves many of Batman’s larger rogues gallery, like Hush, and an adventure that seems to dive into Bruce’s family history. And the primary classic rogues most entangled in its narrative web? Catwoman and the Riddler. There’s even a scene of Batman going to a cemetery in both stories, wearing a very formal black attire… perhaps there’s an old clue he needs to dig up in The Batman?

All of which brings me back to that basic question about Dano’s Riddler: Why are they hiding his face, even when the serial killer (or someone working with him) is being interrogated by Batman behind plexiglass? There’s a nefarious game at play in The Batman, and at least one of the players appears to be staying very hush, hush about his role in it.