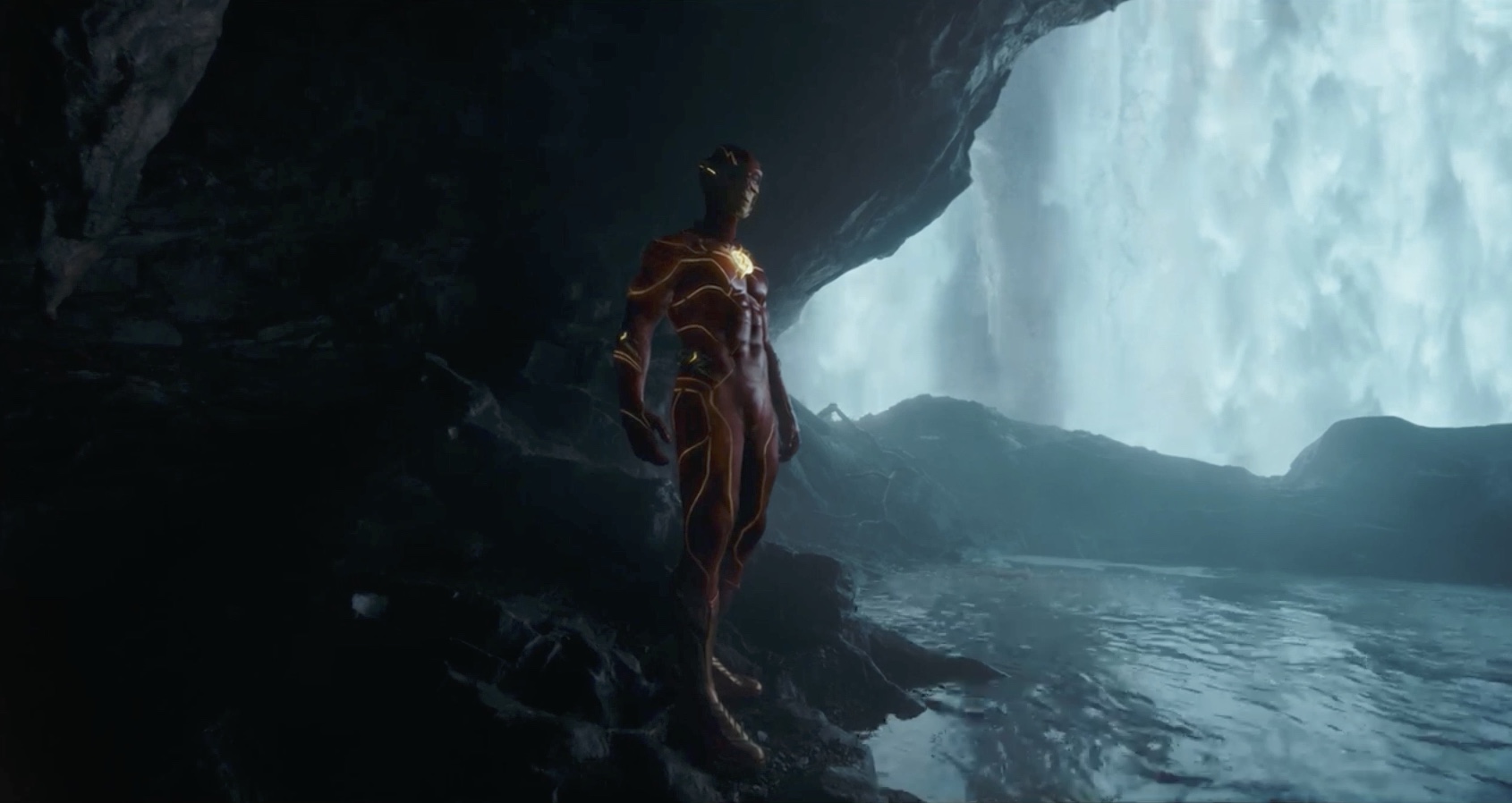 The first footage from Andy Muschietti’s hotly anticipated The Flash movie arrived at DC FanDome and folks, it is quite a ride. We’ve long known that this film would take at least some inspiration from the Flashpoint comics story (which was also adapted for the third season of the TV series), but it seems that there’s a little bit more to it than that.

Sure, the big headline is the fact that Michael Keaton is indeed back as Batman, and it seems that a chunk of this film takes place in the corner of the DC multiverse that Tim Burton’s Batman movies happened in. The very first shot of the footage is of Barry Allen arriving by cab to the same Wayne Manor we saw in Burton’s first Batman film, and throughout the trailer we hear Keaton’s Bruce Wayne interrogating Barry about his multiverse-hopping shenanigans. Hell, it’s possible that this Bruce has never even encountered a speedster before.

But first, let’s just talk about some of these Flashpoint parallels…

Potential spoilers for The Flash movie from here on out!

Here we have Barry Allen, in this incredibly sharp and badass new DCEU Flash costume lurking apparently in front of his childhood home. Why is this significant? Well, as established in Flashpoint (and also in Batman v Superman: Dawn of Justice and Justice League) Barry’s mother was mysteriously murdered here, and his father was sent to jail for the crime. A crime he says he didn’t commit and also one that Barry doesn’t believe he was responsible for, either. And he’s right, because it was Eobard Thawne, the Reverse-Flash, who had come back from the future to murder the mother of his greatest foe.

Once Barry realizes that he has the ability to use his speed to travel through time (as we saw at the conclusion of Zack Snyder’s Justice League), he decides to change the past by preventing his mother’s murder. In doing so, he changes the present, and finds himself in a present that is slightly different than the one he is familiar with.

Now, as far as The Flash movie is concerned, it’s not clear if Barry is looking to change the past, or if he’s merely exploring the multiverse in an attempt to reconnect with his mother, as we see in this next shot, which appears to show a tentative Barry sneaking up on an unsuspecting Nora Allen.

The other possibility (and the one we’ve seen in both the comics and TV versions of Flashpoint) is that this is Barry waking up after he has changed the past, and he is surprised to find himself in a reality where his mother is still alive. In any case, we’re not too sure of what’s happening just yet.

Now, it does appear that just like in the comics, Barry seeks out Bruce Wayne to help him make sense of his bizarre situation. And why wouldn’t he, right? Ben Affleck’s Batman is a friend and mentor to Barry in the DCEU, so he should go looking for him. Of course, he instead finds Keaton’s older Batman (in the comics he finds Thomas Wayne as Batman, but that’s another story entirely). So does the above image of Barry and his mother take place on Earth-89, the same world where the Burton Batman movies take place, or is it after Barry has made another multiversal hop?

I’m going with the former, because of the aforementioned first shot in the footage…

Why are there two Barry Allens?

Barry has apparently hailed a cab from Central City to Gotham City in his quest to find Batman. But not just any cab. It’s a cab driven by…another Barry Allen. Is this a Barry that Barry has picked up from elsewhere in the multiverse who is now along for the ride? Or is this the Barry of Earth-89 who is driving a cab and isn’t a speedster?

Although there’s another possibility…

What if the second Barry is Jay Garrick, and this is some bizarre variation on the “Flash of Two Worlds” story that first introduced the concept of the multiverse to DC in the first place? The design of Barry-2’s costume, which has blue highlights, a lightning bolt without a circle, and lightning bolts on the boots do seem to recall DC’s original Flash, Jay Garrick, ever so slightly.

We get two very brief glimpses of Sasha Calle’s Supergirl in the trailer. It seems that Barry is assembling a team, possibly from different corners of the multiverse, and he’s trying to enlist Batman’s help for it. It’s still not entirely clear if Calle’s Supergirl is Kara Zor-El or a different version of the character like Cir-El or Lara Lane Kent. Her costume certainly resembles the latter, though. And if she comes from the same world as Keaton’s Batman, the timeline and her age would certainly add up (There’s also the chance that she’s neither, and simply this movie’s equivalent of the Flashpoint timeline’s Kal-El, who was imprisoned by the government for his entire life…the shot of Barry finding a mysterious figure bathed in red light seems to indicate that would be the case).

But that still doesn’t solve the two Barrys mystery, nor does it explain why no villain has been announced for the film or any casting that would line up for said mystery villain. That being said…

The villain of The Flash movie is almost certainly going to turn out to be Eobard Thawne, the Reverse-Flash. He’s generally become Flash’s most notable (and frankly, somewhat overused) foe in media in recent years, and he’s the villain of the Flashpoint comic book story that this film is drawing some inspiration from. Until we hear something more credible, we’re going with Thawne as this film’s big bad.

So what does that have to do with the second Barry?

Well, the thing to know about Thawne is he’s from the future. The 25th century to be exact. And he was a MASSIVE Barry Allen/Flash fanboy. So much so that before he got his speed powers, he took his obsession to such heights that he got plastic surgery to look more like his hero. He eventually traveled back in time to meet Barry, perhaps hoping for a team-up, but as you might expect he wasn’t the most stable guy and it didn’t go well.

My money is on the 2nd Barry being Thawne in disguise, having traveled back in time to befriend/trap Barry, kill him, and take his place as the one true Flash. For one thing, he’s wearing yellow in his civilian clothes. Not exactly incriminating on its own, but c’mon, this is a Flash movie. But take another look at the number on that cab: the last two digits are “63.” The Reverse-Flash first appeared in the pages of DC Comics in (you guessed it) 1963.

And this is far less “incriminating” but still worth pointing out. 2nd Barry is clearly very excited to discover Keaton’s Batmobile under the tarp. And, who could blame him? Wouldn’t we all be? But…

It’s ALSO exactly the kind of behavior you would expect from a superhero fanboy from the future.