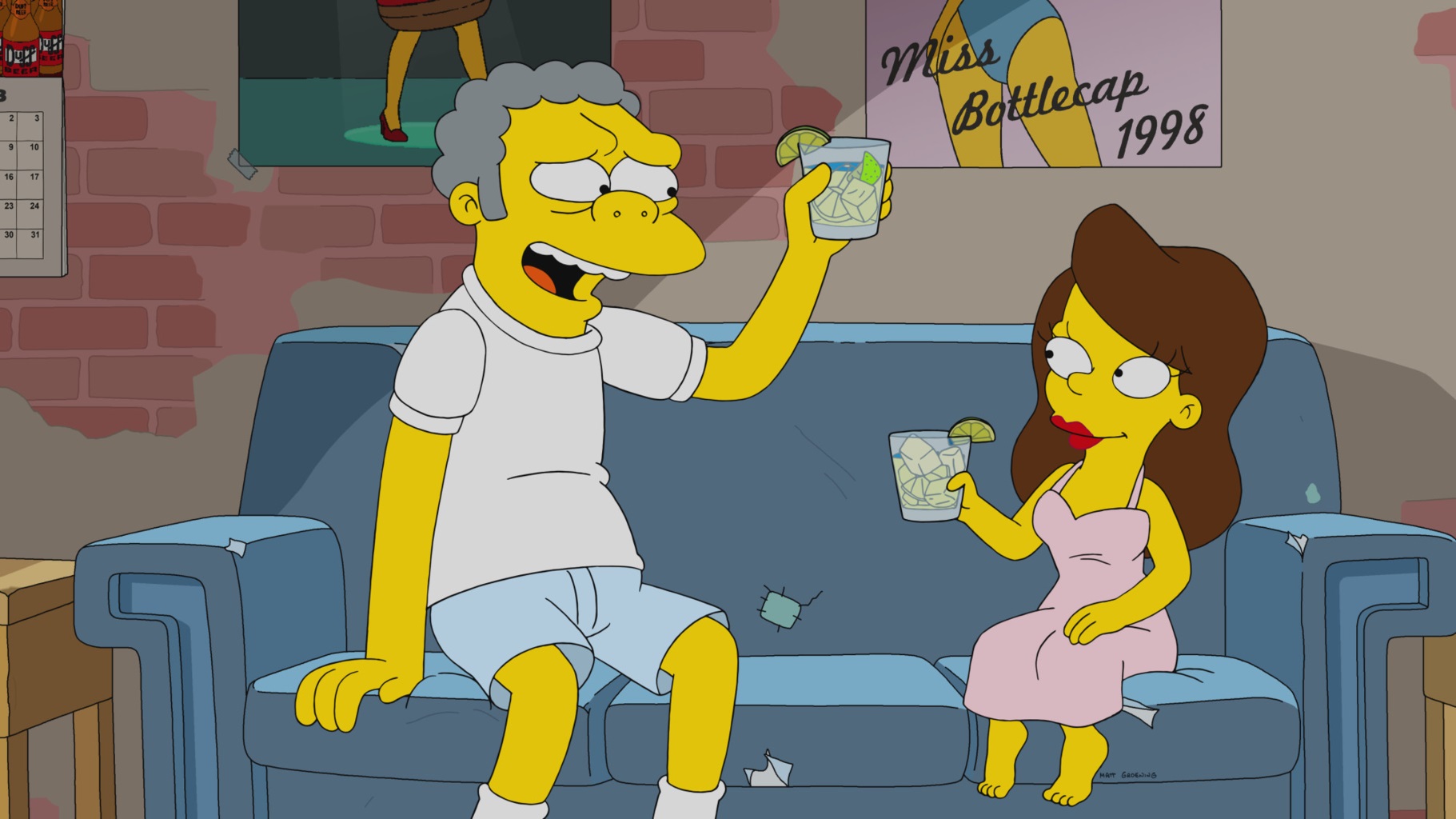 Love meant never having to say you’re sorry until The Simpsons’ “The Wayz We Were.” Moe himself puts it best at the ending, the song is pretty good, but the movie, well, he didn’t like it. That might explain why he is sadly miscast.

Oh, he’s believable. For years we’ve watched Moe go from pug ugly to fugly and pug fugly to eating his own pickled eggs. We can completely accept the premise: he is stuck in a traffic jam, sees the only woman he’s ever loved in the rearview, and happy endings ensue. And it’s not that Moe is not a leading man. He’s carried quite a few episodes of the series, and also once carried Homer away from the middle of a boxing match. Tonight’s episode discusses the elephant in the room, meaning Homer, so we know this is no mean feat for such a mean tempered barkeep.

What doesn’t work is how it turns Moe into mush. This isn’t in response to his lovelorn demeanor, but because he’s not his usual anti-effervescent self. Being cornered by emotion should bring out the kinds of Moe-isms which inspired Lisa to rebrand him as an angry poet but, in “The Wayz We Were,” his caustic wit is dulled. Pamela Reed is well cast as the voice of Ruth Powers, and it is a clever self-revelatory observation that her skin is smoother than American cheese, but their scenes together have too much of an easy sheen.

Moe’s gritty and greasy existence is good, on Moe terms, at the beginning of the episode, plant closings mean more unemployed drunks, and the possum who got trapped in his bathroom is getting good at dispensing towels and aftershave. But, stuck in a traffic jam while James Taylor’s “Damn This Traffic Jam” is playing, he has time to think. “Nothing to be late to and no one who cares,” he says while his reflection betrays “objects in the mirror may be more depressed than they seem.”

This actually works very well as foreshadowing to the later mirror scene in his bar. Moe has the kind of face which makes Facebook face recognition say “yuck.” Even the warped reflection in a dirty spoon doesn’t improve it. Moe previously had a flashback where he realizes everything which has gone wrong in his life happens after he says the words “I love you.” He can’t even proclaim “I love New York” without getting mugged by both Elmo and Spiderman. The inevitable “love ya” payoff is actually well-downplayed when it happens, until Moe begins playing those spoons.

By the midpoint of the episode, Moe is living in Bart’s treehouse, ducking under fire from laser guns while Bart and Milhouse play spaceman. “The alien has feelings,” Bart notices. “Kill him.” Living in shame in the Simpson treehouse is a throwback to earlier times. Even though that treehouse is the famed location of many horrors, the other residents of Evergreen Terrace won’t be knocking at the Simpsons door any time soon.

Marge calls a “whine and cheese” meeting to discuss the new traffic problem, and the family is singled out as bad neighbors. This is also a throwback, and at first it appeared to be a return to old form, when the Simpson family were pariahs everyone in Springfield knew, and had forgiven. But the complaints are merely annoyances, like corduroy scraping pants, rather than true suburban blight, and when Homer wins the neighbors over to him, it is too easy.

In the leadup to the episode, the story of the prehistoric first traffic jam, we see Fred Flintstone as one of the cavemen. Caveman Moe neither hunts nor nests, he brings drinks in the skulls of fallen Neanderthals. During the setup, Professor Frink invents transportation, and says he’s working on language. No one understands, of course. Frink will later smite a global data behemoth by hacking into their source code. He’s changed his own social media standing by having it be known he’s gone five months without a wedgie. Social media social commentary comes when the Wayz traffic app’s claim to fame is they are not invasive, like Google, but they have a disclaimer saying they are owned by Google.

The traffic jam itself offers some comic background payoffs. Ned has a field day, first observing “All those middle fingers pointed up to the Lord,” and ultimately becoming a carhop, serving iced coffee and snacks to irate drivers, while the Simpsons charge for photos. Also, Moe learns to watch out for stray jam musicians at Fish Crossing stops.

The couch gag is as imaginative as any pre-learning tool. It puts a Playskool twist on a Game of Thrones subplot. Lisa can’t turn Princess Maggie’s frown upside down with iambic pentameter, because the baby is the mother of dragons. Marge’s punchline makes it worthwhile. “Homer, you father is messing with Maggie’s head again.”

At one point Homer tells Moe the only real solution to his relationship dilemma is to propose “the big M.” The choice is apparent to Moe: marriage or murder-suicide. He knows the difference, and still promises to leave the toilet seat on, the way wives are rumored to like. By choosing life, Moe ushers in what looks like a new recurring character. But it’s neither warm, fuzzy, nor funny enough.

“The Wayz We Were” is a tepid episode, which is only slightly warmed by the songs. It is also a sweet episode, which explores Moe’s innermost turmoil, but it doesn’t bring it to a boil, much less a simmer. Moe has sex in this installment and it’s still not hot enough.

Hogwarts Legacy PC Requirements: Can You Run the Game?
Forspoken Is That Frustrating Piece of Entertainment That Gets Good “Eventually”
The Last of Us: Are the Infected Actually Zombies?
HBO’s The Last of Us: The Changes to Bill’s Story and the “Parallel Universe” of TV
ITV Nolly Review: Russell T Davies’ Heartfelt Tribute to ‘Difficult’ Women