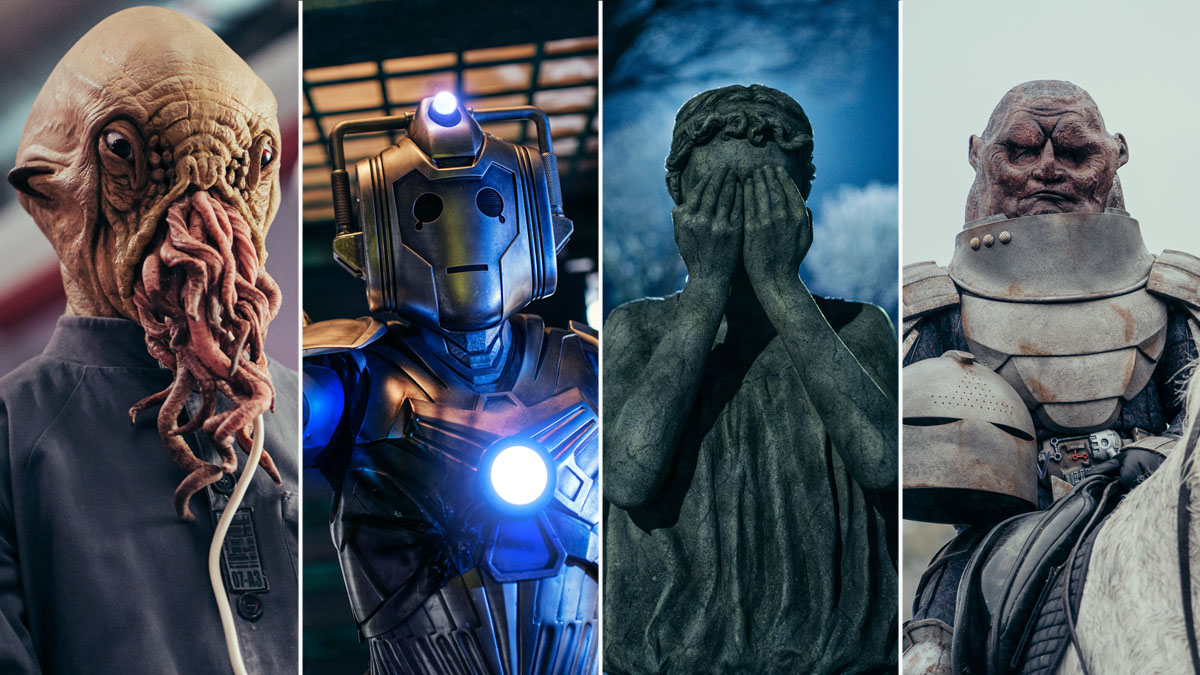 It’s no coincidence, said BBC Director of Drama Piers Wenger at the Doctor Who: Flux press launch that Series 13 launches on Halloween. “Some extraordinary monsters have been conjured up,” teased Wenger, adding the familiar instruction, “Don’t blink.”

Thanks to wily set snoopers and Steven Moffat’s Instagram page, it’s been known for months that the Weeping Angels – as glimpsed in the first full Doctor Who: Flux trailer – were returning to Doctor Who for Jodie Whittaker’s final series.

“The Angels are back!” announced Mandip Gill, speaking on Zoom to assembled press. Gill and John Bishop, who respectively play Companions Yaz and Dan, swapped their memories of filming with the Angels. “Trying not to blink in the freezing cold was so difficult wasn’t it?” Gill asked Bishop, who joked about the hardship of keeping his eyes open with tears streaming down them from the icy temperatures.

Joining the Weeping Angels will be the Sontarans, the Cybermen and the Ood. So that’s four alien races from Doctor Who’s past along with the new monstrous creations. How much do we know about them? Back in July’s Comic Con at Home panel, Chibnall gave the one-word tease “Swarm”, which got us thinking… Then in the run-up to the series air date announcement, an online fan treasure hunt led to the briefest of glimpses of a creepy toothy villain. Then came a teaser in which the Doctor warned “the Flux is coming. We don’t have much time. It’s bringing with it the Sontarans, Weeping Angels, creatures known as the Ravage(r)s, and enemies from across the universe. This is the fight of our lives.”

After that, the full trailer revealed these two new additions – a sparkly humanoid geode race with some extremely sharp tailoring, and a very Good Boy/Chewbacca/fearsome space warrior/grumpy Rolf from The Muppets guy:

Are either of those the creature that Chris Chibnall says will prove a different kind of challenge to Thirteen? Doctor Who: Flux, Chibnall told the press, will welcome “a particular character who I think is a bit more psychologically terrifying for the Doctor.” Looking to Jodie Whittaker for confirmation, he receives a nod. Perhaps that character is involved with the Series 13 plotline that forces the Doctor “to face up to the secrets of her own past,” as teased in promotional material.

“I don’t know which other monsters we’re allowed to say?,” Whittaker asked Chibnall, who jokingly replied “It’s my last series, Jodie, I don’t care.” Asked how he comes up with ideas for new creatures, Chibnall explained, “Sometimes it’s an image, sometimes it’s an idea about something that’s going to be threatening to the Doctor, or scary to kids.” And sometimes, by the looks of it, it’s… RuPaul’s Drag Race UK and Star Wars?

Doctor Who: Flux starts on BBC One, BBC iPlayer and BBC America on Sunday the 31st of October.