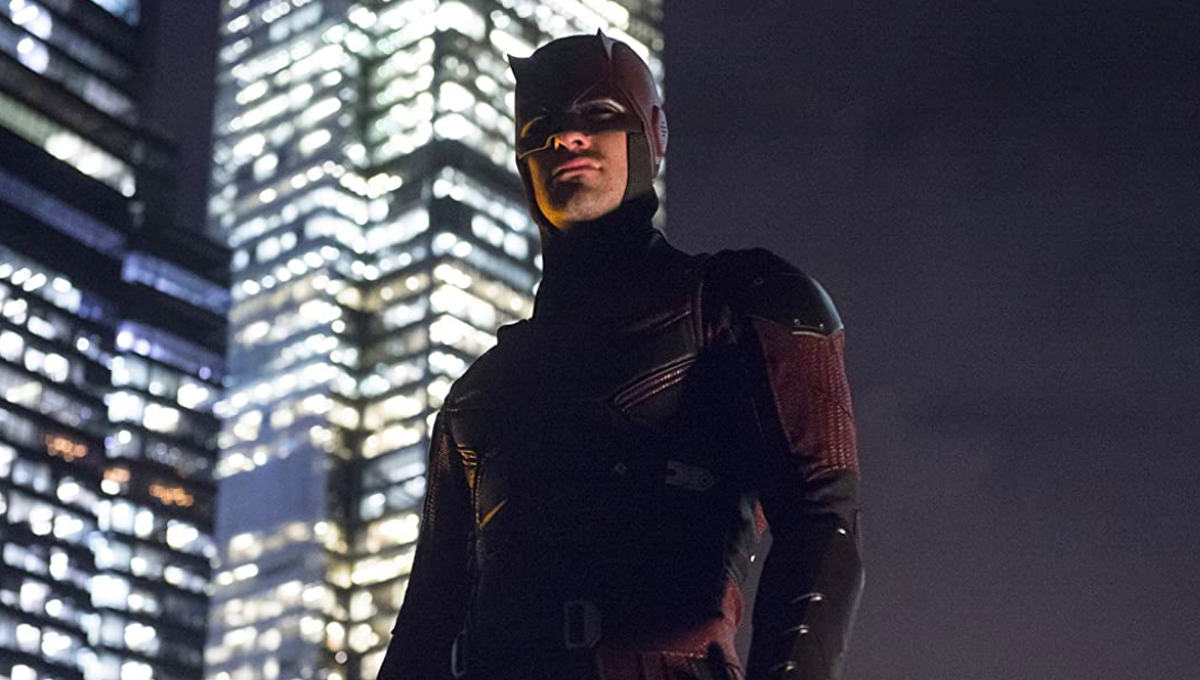 As if the multiverse mania confirmed for Spider-Man: No Way Home wasn’t providing enough speculative hype, the film is rumored to feature a crucial Marvel Cinematic Universe Netflix nod with the return of Charlie Cox’s Matt Murdock—and potentially his costumed crime-fighting alter-ago, Daredevil. While such an appearance would seemingly canonize the events of the revered Daredevil TV series and its shared-universe cohorts, the center of said rumors, star Charlie Cox, is hinting the possibility of a different kind of manifestation.

The speculated onscreen return of Daredevil, the blind lawyer vigilante, is an inevitable interview question for Cox, given the potential gravity of his answer. Thus, the English actor—the star of recently-released AMC+ crime drama Kin—was well-prepared when the crucial query came his way during a recent virtual interview with Sirius XM. While he is obviously in no position to provide a firm answer of any kind, Cox does present an intriguing array of hypothetical scenarios about what a Daredevil return—be it in Spider-Man: No Way Home or even a Disney+ revival series—could look like, containing potential grains of truth.

“What happens in the comics is a writer and an artist will team up for a run of a comic, so they’ll do 10 issues, 20 issues,” says Cox, describing the methodology of a prospective Daredevil return run. “If there was an opportunity for me to come back as Daredevil, whatever that would look like, I imagine it would be a reimagining of the character and the show. If they choose me to do it, there are going to be some elements that are of course the same. Or they might choose someone else and reboot it all over again.”

Contextually, the long-running rumor of Cox returning to play Murdock/Daredevil gained significant momentum when trade TV Line (a PMC corporate sibling of Variety and Deadline,) ran a report last December claiming that the actor will reprise his Netflix series character on the big screen in the then-unnamed threequel we now know as Spider-Man: No Way Home. While the claim remains unconfirmed, it nevertheless chummed the proverbial waters for speculative sharks. Yet, one aspect of the report that we know to be true is the notion that there is nothing—legally or logistically—standing in the way of Cox’s prospective role reprisal, seeing as the licensed exclusivity Netflix once held to bring Daredevil to their streaming platform expired in November 2020, two whole years after the show’s third-and-final season premiered.

Consequently, Cox is clearly playing coy with his answer, especially since he also teases the idea of Murdock/Daredevil being recast. While anything is possible, such a scenario is highly unlikely with the widespread acclaim reaped upon his performance across Netflix’s 2015-2018 Daredevil series and 2017 single-season crossover event series The Defenders. Indeed, Cox’s rendition of Marvel Comics’ Man without Fear has achieved a kind of cult status, creating a backlash that would be hard to quell amidst a potential recasting. Moreover, his Daredevil is the definitive representative of subsequent Netflix misfit Marvel shows Jessica Jones, Luke Cage, Iron Fist and The Punisher, which many see as having been unjustly relegated to the realm of apocrypha after cancellation and changing company landscapes led to more-polished, direct MCU television offerings on Disney+ like WandaVision, The Falcon and the Winter Soldier, Loki and the imminent Hawkeye.

When posed with the shocking scenario of Daredevil being recast, Cox states cheekily, “I would go down into my basement. I would find my Daredevil mask that I have. And I would hunt them down. I would make them fight me for it.” Of course he would subsequently offer the more-gracious (albeit less-interesting) answer that he would not give advice to any would-be successors, since he would want them to discover the character for themselves in the same way that he had done, and hopes it proves as fulfilling as it was for him.

However, Cox presents a more feasible possibility when teasing what he calls a “reimagining” of his character; one that fits No Way Home’s multiverse premise. While the Netflix Marvel shows were contemporaneously touted as taking place in the MCU—and even occasionally dropped onscreen Easter eggs that seemingly codified the notion—no entry from the billions-generating movie powerhouse of Marvel Studios ever got around to acknowledging the existence of those characters. Indeed, the ongoing MCU ghosting of the New-York-City-set Marvel shows resulted in an eventual acceptance by the fandom that the Netflix nook, notoriously dubbed the “Street Level,” was not be destined to be canonized on the big screen. This remains the case, since Daredevil, along with other shows produced or co-produced under the now-absorbed subsidiary studio, Marvel Television, were abruptly swept into obscurity; a fate shared by MCU-character-showcasing ABC-aired Marvel shows like Agents of SHIELD and Agent Carter. Thus, Cox’s hypothetical Daredevil return adheres to that harsh reality.

“We must also be grateful. Because if nothing ever happens going forward, we’ve got three great seasons of television, and we haven’t ruined it,” says Cox. “You’ve got to be careful what you wish for. You come back and it’s not as good or it doesn’t quite work or it’s too much time has passed. It doesn’t quite come together in the same way. You don’t want to taint what you’ve already got. If we never come back, you’ve got these three great seasons and our third season was our best reviewed. So, the trajectory was up. I am tremendously proud and grateful for what we have.”

The scenario of a rebooted Daredevil is expected to be initially minor, with Cox rumored to appear in No Way Home as Matt Murdock (not as Daredevil,) in his professional capacity as a lawyer, potentially defending Peter Parker (Tom Holland)—after he surrenders to authorities, as depicted in the trailer—in the aftermath of the film’s premise-setting doxing of his secret identity and framing for the murder of Mysterio. However, Daredevil’s prospective MCU presence might already be planted with the rumor that Vincent D’Onofrio secretly reprises his role as Daredevil’s signature villain, Wilson Fisk, the Kingpin, on Hawekeye. Notwithstanding D’Onofrio’s open enthusiasm for a return, the rumor is being boosted by the prominent inclusion of the character Maya Lopez, a.k.a. Echo (Alaqua Cox), who, based on the trailer, might be fulfilling the character’s early comic book arc as the adopted daughter and deadly enforcer of the Kingpin (a version of him, anyway). That capacity initially made her a formidable adversary of Daredevil until a romantic arc with the hero eventually gave way to a heroic turn, first as Ronin, then later as Echo.

Nevertheless, a reboot of Matt Murdock/Daredevil—as played by Cox—in the MCU could prove to be the boon for which fans of the gone-but-not-forgotten Netflix series have long-wished. It might even become a blessing in disguise since, as fondly-remembered as Daredevil and its fellow Netflix peers may be, the shows were anything but perfect, and stand in contrast—in tone and production quality—from the carefully-curated MCU. Thus, now years removed from the implosion of Marvel’s Street Level continuity, Daredevil has a chance for a fresh start in the MCU’s more ostentatious big screen arena. In that sense, it’s still a shared win for left-behind heroes like Jessica Jones, Luke Cage, Iron Fist and (at least for now,) The Punisher.