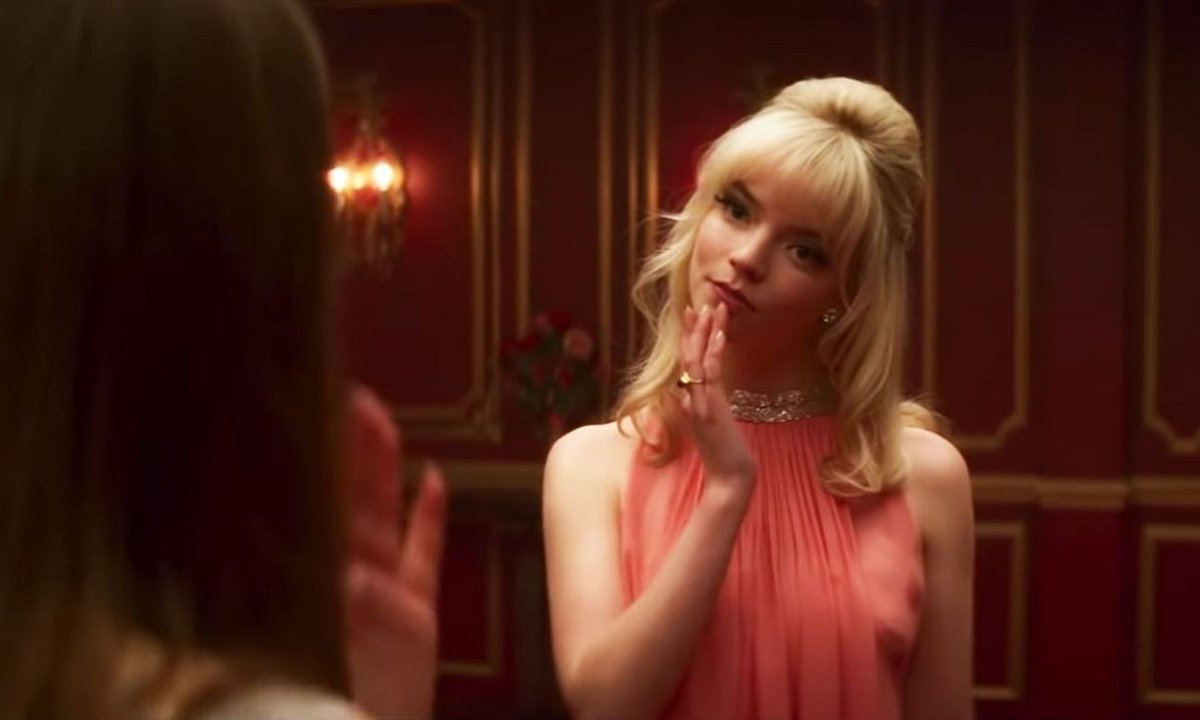 “Maybe you know some little places to go to where they never close,” Anya Taylor-Joy sings in the latest music video from director Edgar Wright’s Last Night in Soho. After all, both the film and the song, “Downtown,” which was made famous by Petula Clark, are about destinations.

From the moment the needle drops on the onscreen vintage Dansette record player, Last Night in Soho lands in the world of British pop. The surrealistic ghost story follows fashion designer Eloise (Thomasin McKenzie) as she dreams her way into Swinging London, and the pleasant nightmares of the mod nightlife. Taylor-Joy plays Sandie, an aspiring singer on the cusp of discovery and who haunts Ellie’s dreams. Or is she dreaming?

Cliquey London youth in the mid-1960s divided themselves between mods, rockers, and, as Ringo Starr declared himself in A Hard Day’s Night, “mockers.” Edgar Wright would traditionally be in the latter category. He spoofed zombies in Shaun of the Dead, parodied cop movies in Hot Fuzz, and tweaked the nose of action films with Baby Driver. Wright approaches his films sonically, and for Last Night in Soho’s new music video, he subverts his usual satire by darkening a celebratory anthem to bright lights with a somber tone.

The music video shows Taylor-Joy recording “Downtown” in a studio, live with a full orchestra behind her while clips tease her character’s arc in the film. Taylor-Joy, who won a Golden Globe and was nominated for an Emmy for her role in The Queen’s Gambit, previously sang onscreen in the film adaptation of Jane Austen’s Emma. (2020), and she once told Den of Geek she hopes to eventually devote herself to singing professionally. She was the breakout star of the film The Witch, and her downtempo rendition is spellbinding.

You can watch the video here:

“Downtown” was written by Tony Hatch, who produced Clark’s 1964 recording. The pair had been working together since Hatch helped producer Alan A. Freeman on Clark’s 1961 No. 1 hit “Sailor.” Hatch became Clark’s regular producer in 1963, but their first five collaborations didn’t light up the charts. That changed when he saw the neon signs which illuminated Broadway on his first trip to New York in the autumn of 1964.

Hatch wrote the core of the song upon hitting 48th Street in midtown Manhattan, the melody coming while he was waiting for the traffic lights to change. According to some sources, he originally envisioned “Downtown” as a doo wop R&B song, and intended to pitch it to the Drifters, whose song “Sweets for My Sweet” inspired Hatch to write “Sugar and Spice,” which became a hit for the Searchers. According to that narrative, it never occurred to Hatch that a white woman could even sing it.

The more accepted story is that Hatch pitched Clark four songs he’d gotten from New York music publishers for an Oct. 16, 1964, London recording session at Pye Studios. None of the songs turned Clark on, and she asked what he’d been writing. He played her the unfinished “Downtown,” scatting the vocal melody because the lyrics only consisted of a few lines and the title word. Clark told him to finish it; she didn’t care if it was a hit or not. He finalized the lyrics about a half hour before the session.

Hatch scored his arrangement to make the giant orchestra accompanying Clark sound like a rock band, and the backing was done live rather than tracked. The musicians included bass player Brian Brocklehurst and a pianist; drummers Ronnie Verrell and Bobby Graham keeping time with other percussion players; a string section consisting of eight violinists, two viola players, and two cellists; a horn section of four trumpet players and four trombonists; and a woodwind quintet on flutes and oboes. Vocal group the Breakaways sang backup.

And then there was the guitar section. The session players were veteran finger benders Vic Flick, Big Jim Sullivan, and Jimmy Page, who would go on to turn The New Yardbirds into Led Zeppelin.

The combo recorded three takes of the song. The second was picked for release. Joe Smith of Warner Brothers loved the song so much he ordered a rush release in the U.S. where it debuted at No. 87 and became the first No. 1 hit for the year 1965. This made history as Clark became the first British female artist to have a No. 1 hit in the rock and roll era in the U.S.  She was only the second female British singer to have a No. 1 hit in America since Vera Lynn’s 1952 song “Auf Wiederseh’n Sweetheart.” Clark would go on to have a run of 15 consecutive U.S. hits.

“Downtown” was released in the UK in November 1964, but was kept out of the top spot on the charts by the Beatles’ “I Feel Fine.” Clark was already a regular on BBC programming, and had also a wide following in France and Italy. Besides her string of hits, she also appeared in the 1968 Francis Ford Coppola movie, Finian’s Rainbow, and the film musical version of Goodbye, Mr. Chips.

“Downtown” has been covered by Frank Sinatra, The B-52s, Yo La Tengo, and Dolly Parton.  Winona Ryder’s character sang it in the 1999 film Girl, Interrupted. But it also has one much darker place in history: The Nashville bombing of Christmas 2020. Followed the broadcast warning: “If you can hear this message, evacuate now,” the song was broadcast from the RV to give residents time to get out of the area before the explosion, which caused tremendous damage to the neighborhood.

There are Soho sections in both London and New York, which makes it perfect for the film. Taylor-Joy brings out the loneliness and desperation which follows a night downtown. The title of Last Night In Soho, by the way, comes from a song of the same name by Dave Dee, Dozy, Beaky, Mick & Tich.

Last Night in Soho will be released in theaters on Oct. 29.