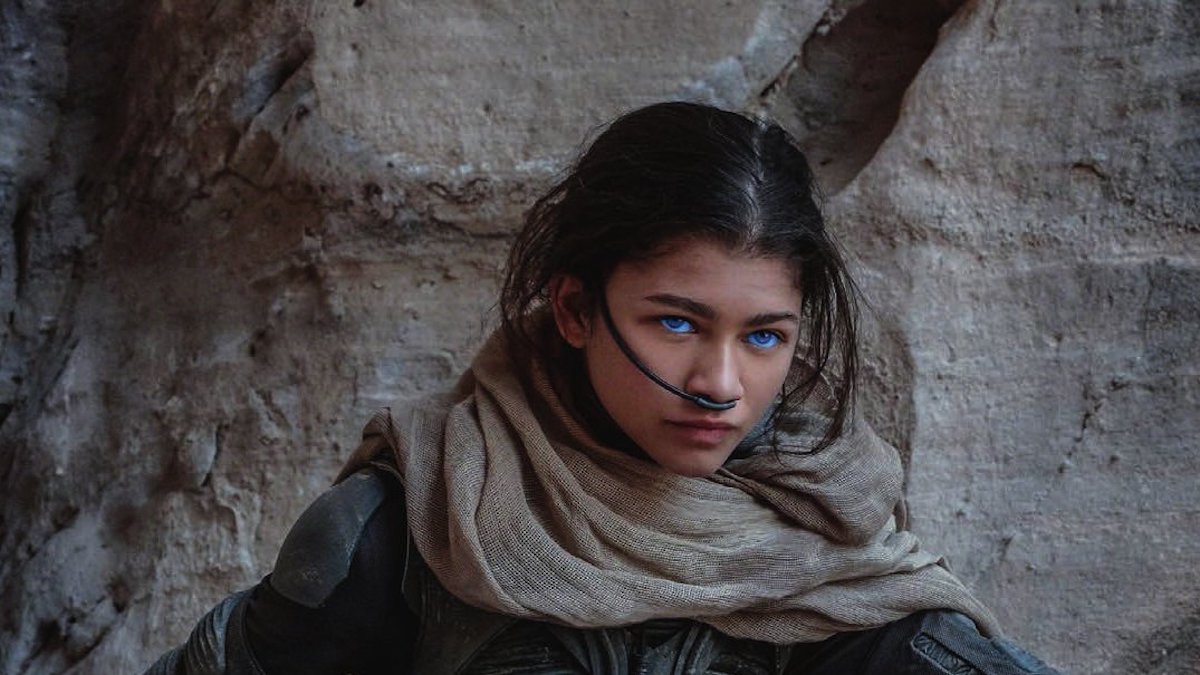 Paul Atreides has survived the fall of his father’s house. When you get right down to it, this is very much the central conflict and core narrative arc to writer-director Denis Villeneuve’s Dune, a film which waited until its opening title card to reveal that it is merely “part one” of a larger story. The film begins with Paul (Timothée Chalamet) having visions of his family’s army lying scattered and dying, and it ends with that horror coming to pass.

Yet despite all that inherent tragedy, the conclusion of Dune feels less like a bitter denouement than it does an exciting tease of new sights to come. From the image of a Freman riding a Sandworm (or Shai-Hulud) to Chani (Zendaya) literally calling this film’s finale “a beginning,” the movie reveals itself to be about how young Paul has taken his first step into a larger world—one where the spice always flows.

Still, we imagine that many will have questions about what it all means, especially if this is their first trip to the planet Arrakis. So we’ve assembled the handy guide below to help make sense of things as we wait a hopefully short amount of time for “Part Two.”

Is This an Ending or Beginning?

As Chani, the girl of Paul’s dreams, says, this is only the beginning of the story. Or if you want to get technical, it’s about half of it. Author Frank Herbert’s 1965 novel Dune is a sprawling science fiction opus which spans years. And the section of the story that Villeneuve zeroed in on for adaptation makes up about 320 pages of my 560-page copy of the book.

So for those feeling as if this gargantuan film ended mid-sentence, well that’s not too far from the truth. Still, it does stop on a significant turning point in Paul’s dawning awareness about his place in the universe. Prior to the film’s conclusion, he’s been unsure of how to interpret and accept his “dreams,” or visions, of what might be. After the movie is over, there is little doubt he is on a path drenched in death, as confirmed in the vision he endures after he takes the life of Jamis (Babs Olusanmokun). In that moment, he sees a future version of himself wielding a sword caked in blood. He accepts this and still wets the sand with Jamis’ moisture, and then declares “my road leads into the desert.”

So while it’s not much of a resolution for a story in which Paul learns his father has been murdered, and sees his birthright stolen from him by the dreaded House Harkonnen, it is a serviceable moment to close the book for now. Paul and his mother Lady Jessica (Rebecca Ferguson) have survived the loss of their power and wealth, and a second film will pick up on what a life in the desert will do for mother and son—as well as a younger sibling. Do recall that Paul correctly realized his mother was pregnant.

All of which will have major implications in “Part Two,” as well as a potential third film. Indeed, while Villeneuve has confirmed he will fully adapt Herbert’s first novel in a second film, he’s already told Den of Geek he hopes to adapt Herbert’s follow-up book, Dune Messiah (1969), into a third movie, turning Paul’s journey through the sands into a full-fledged trilogy.

Is Paul Really a Messiah?

At the end of the film, a Freman leader named Stilgar (Javier Bardem) remains undecided on whether Paul is the “Lisan al-gaib,” which is the Arrakeen term for “the Voice from the Outer World.” Jamis obviously considered such notions to be folly, hence his fatal mistake of challenging Paul to a duel. Before he died, Jamis even mocked Paul as an interloper by calling him “Outworlder,” which looks a lot more ominous after he was so soundly slaughtered in the fight which followed—even as this was only Paul’s first kill. So the following question arises: Is Paul an actual messiah in Dune, a chosen one like Neo or Anakin Skywalker?

Without getting into any spoilers beyond this film, let’s just say there’s a danger to believing in such pretensions. Recall that at the beginning of the film, Reverend Mother Mohiam (Charlotte Rampling) confides in her former student, the Lady Jessica, that Arrakis has been prepared for her and Paul. The Bene Gesserit, the witchy order which both women belong to, has laid “a path” for Paul, and we now see him and his mother on it by movie’s end. What might be lost in translation to the screen is exactly how this works. Centuries before the events that occur in Dune, another member of the Bene Gesserit traveled to Arrakis and “prepared” (read: brainwashed) the local, superstitious population with prophecies and religious texts about a messiah who would be born Offworld to a
“weirding woman” (or Bene Gesserit) and lead the people of Arrakis to paradise.

This is a trick the Bene Gesserit have done to an unknown number of worlds throughout the universe over the centuries, preparing entire planets for the arrival of another member of their coven, who when the time comes hundreds of years later can find a most hospitable population ready to embrace her and her children as prophets and messiahs. Of course, given Paul’s habit of enduring actual prophecies and visions in his dreams, and how lowly the Fremen find themselves under the Harkonnen boot once again by the film’s closing credits, the table is now set for Paul to step into a lofty, Christlike role…

What is Going on with Paul’s Dreams?

Paul might have visions. But does that mean they come true? At the beginning of the film, Paul tells one of his favorite mentors, Duncan Idaho (Jason Momoa), that he had a dream where Duncan lay dead after a battle in the sand. And that more or less came to pass during the film’s third act. And yet, late in the movie, Paul also has visions of Jamis, the man who would become his first fallen foe, trying to teach him how to ride a Sandworm and in another instance saying, “I will show you the ways of the desert.”

While one could rather darkly surmise that Jamis did serve the latter purpose by dying at the end of Paul’s crysknife, these were nonetheless false visions. Jamis is never a teacher, instructing Paul in how to use the same Freman tools we see Dr. Liet Kynes (Sharon Duncan-Brewster) also attempting to operate earlier in the film. Similarly, Paul has multiple visions of his duel with Jamis. In some, the battle occurs closer to midday instead of at dawn, and in others it is Paul who dies, bleeding out on the sand instead of Jamis.

All of which should give Paul some relief in knowing that he’s not absolutely destined to be stabbed by Zendaya’s Chani after the first time they kiss. Nonetheless, as with Duncan Idaho’s death, it is a possibility she could stab him. That is because Paul’s visions are not of absolute fate or a written destiny, but changing outcomes and variables as shifting as the desert sand in a strong wind. He doesn’t see one future, but all futures. Which can change as readily as the direction of the wind. And the power doesn’t come from being a messiah; it’s a product of hundreds of years of selective breeding by the Bene Gesserit.

Recall that in Dune’s future, all forms of artificial intelligence and supercomputers have been outlawed (it’s a long story left out of the movie as to why). Hence human beings are born and raised to have their different abilities and gifts heightened. For the Bene Gesserit, this takes on an almost supernatural connotation while for those considered Mentats, like Thufir Hawat (Stephen McKinley Henderson) in the movie, it more resembles them becoming human calculators, always speculating on the odds and risks at any given moment.

Paul is the eugenics result of this done on steroids and in secret by the Bene Gesserit’s guiding hand. It’s also why the Reverend Mother reprimanded Jessica for having a son—they think such power is too great for a male born into a patriarchal dynasty. It is similarly why she pushed Paul to the limit in the Gom Jabbar test with his hand in a box; she wanted him to fail so she’d have an excuse to kill him.

Paul has almost superhuman abilities from his genetics and Jessica’s upbringing (she broke another Bene Gesserit command by teaching him their witchy ways, such as the “the Voice”), and when those gifts are altered further by the spice melange’s psychotropic attributes… well, things are about to get weird.

What We Can Expect from Dune Part Two

Paul and Jessica survived their escape from the Harkonnens, but revenge is still a long way off. Heck, they haven’t even reached the inside of Stilgar’s Sietch! While Stilgar tells Paul that he is one of them now, a life for Jamis’ life, Paul still needs to actually be accepted among the Fremen and even adopt a new Fremen name. Inside Stilgar’s Sketch, Paul and Jessica will soon discover greater mysteries about this desert culture, the spice, and what a new life divorced from typical intergalactic power plays and intrigue could look like. And yes, this includes finally getting to know Zendaya’s Chani.

That said, we haven’t even met all the major Offworld players in the saga yet. While Oscar Isaac’s Duke Leto, poor Duncan Idaho, and a number of other likable characters have met their ends, there is a slew of new characters to be introduced, many of whom may not be so lovable. For starters, we will undoubtedly meet Feyd-Rautha Harkonnen. As the young and strapping nephew of the grotesque Baron Harkonnen (Stellan Skarsgård), Feyd-Rautha is about Paul’s age and just as clever. Yet he’s inherited his family’s cruelty and depravity. Hopefully, we’ll even see him in his element on the sand of a gladiatorial arena worthy of Ridley Scott.

Feyd-Ratuha is who the Baron hopes to one day rule over Arrakis, but for now, the Baron’s least loved nephew, Beast Rabban (Dave Bautista), will continue presiding over Arrakis with an iron fist, hunting the Fremen in the desert. He also might have to contend with remnants of Atreides’ household, who survived the first film’s fateful ambush and now hide among the planet’s less hostile and more domesticated villages, waiting for a chance at revenge.

Finally, we have yet to meet the Emperor of the Imperium we’ve heard so much about. But rest assured that the Padishah Emperor Shaddam IV will play a significant role in Dune Part Two, as will his daughter, the Princess Irulan.

There is much left to see as Paul’s road leads deeper into the desert… and possibly out of it.

Dune is now playing in theaters and on HBO Max.