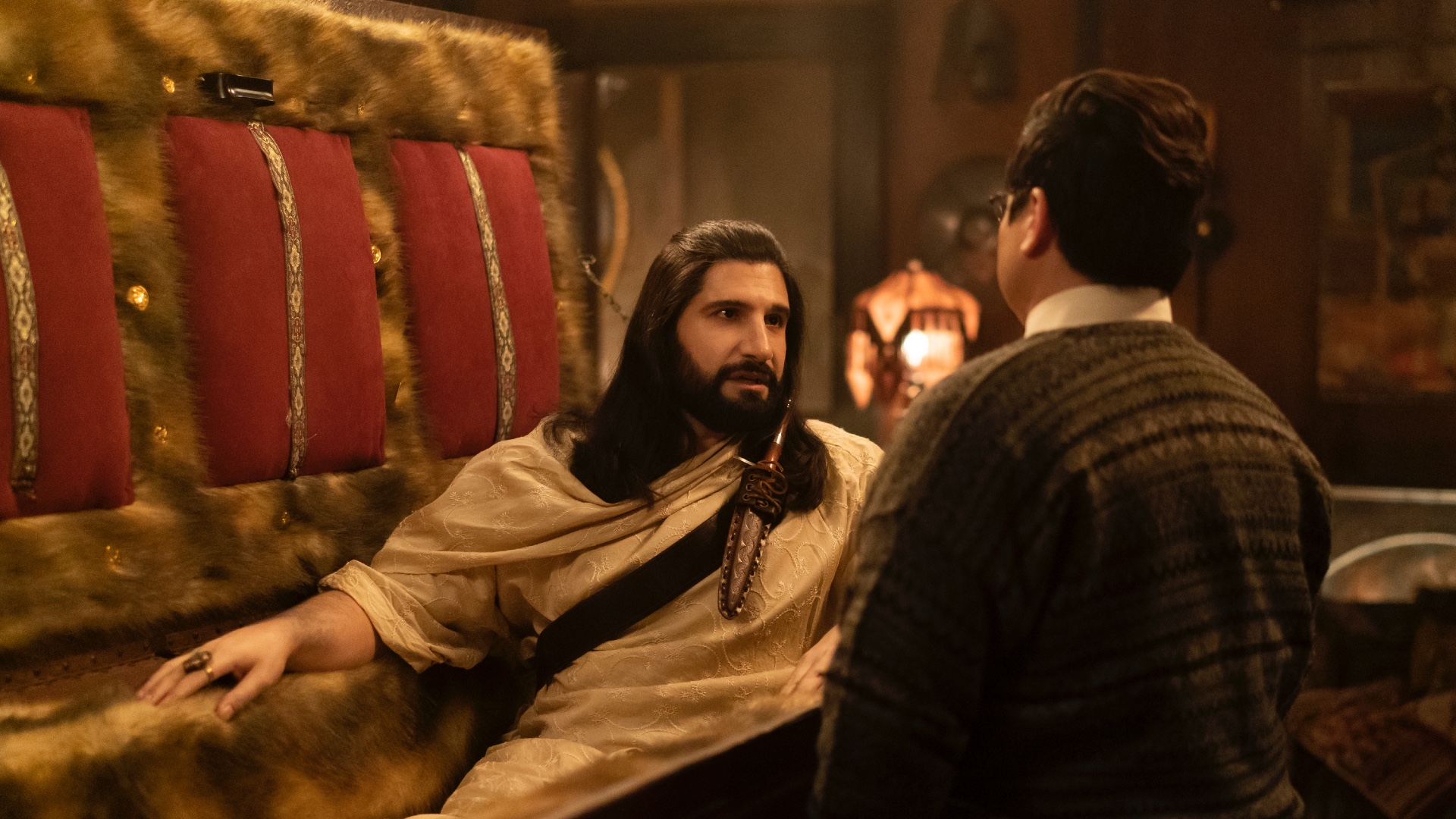 What We Do in the Shadows Season 3 Episode 9

Talk about sucking all the air from the room. Vampires are impressive, lethal, and mythic, but energy vampires can take center stage with the subtlety of a passing wind, breezing by. Silent, but deadly, the stench of their memories lingers on interminably. In What We Do in the Shadows  season 3 episode 9 “A Farewell,” Nandor (Kayvan Novak) makes a final decision as the sad co-head of the Vampiric Council, but Colin Robinson (Mark Proksch) usurps all authority, attention, and cause for celebration or consolation.

The episode begins in the aftermath of the fateful events of “The Wellness Center.” The great Nandor the Relentless, who had recently celebrated the anniversary of when he was first crowned national tyrant, now sits in a cage, sullen, lonely, and sick to death of being sick of death. Guillermo (Harvey Guillén), his familiar-turned-bodyguard, turned familiar now, kidnapped his master to save him from a dangerous brainwashing cult. It turns out he did the right thing and at just the right time, as the rest of the bloodsuckers took a page from the Order of the Solar Temple, rushing off to drink in the Kool-Aid of the morning sun.

Nandor’s housemates’ attempt at deprogramming quickly devolves into something more resembling a drug intervention. But it’s not done with an atmosphere of tough love with understanding, but more like the way the family intervened on Christopher Moltisanti on The Sopranos. Insults are hurled, guilt is spilled, responsibilities shirked, and Colin Robinson threatens Nandor with a cattle prod. Given the choice of staying with these toxic housemates or dissolving into the hive mind of a devotional sect is a no-brainer. And Nandor’s got just the mind to do it.

The back-and-forth discussion of Nandor’s condition is roundly covered, and squarely pegged. It is a continuation of the arguments he and Guillermo had after the escape/kidnapping. Each of the players have legitimate beefs, but are really only there to tear into Nandor’s beliefs. When the former warlord goes on the offensive, however, he really is relentless. He calls and appreciative Laszlo “the laziest vampire he’s ever met.” Admits to real hurt feelings when addressing Nadja, and shuts down the neediest sucker in the room.

“I would not even remember your name if it was not written on a piece of paper I keep in my pocket at all times,” Nandor says to Colin, and the entire room says ouch. This goes to the heart of the secondary story, Colin Robinson’s 100th birthday. The season has been building to it gradually, but so insidiously and covertly it has remained all but a faint whiff in the air.

Colin mentioned his upcoming centennial celebration in the opening episode, and continued researching the nature of energy vampires for a few more installments, then his interest petered out into less and less satisfying means of attaining energy. He was really hitting rock bottom with some of his ideas, which were more of an annoyance to him than those around him. From sifting through buckets of shit to marking his territory in a room only he would enter, his choices of sustenance have been off. Colin ran from Nandor when the elder bloodsucking vampire was oozing despair and humiliation. Colin should have been all over that. But it appears he must have been distracted by forces beyond his control, and it was something Laszlo (Matt Berry) picked up on.

Laszlo has become quite a fully realized character this season. The arc of his emotional growth has been subtle but just as wide as Nandor’s mid-eternal-life crisis. But Laszlo has been keeping it a secret. Hidden behind the masturbatory self-indulgent front he portrays to the world is a deeply committed, and loyal friend who will never betray a comrade, even though he may personally be unable to abide his very existence. Such is the love Laszlo has for Colin Robinson, whose secret he’s kept even from Colin Robinson.

What We Do in the Shadows has been having a ball with foreshadowing this season, and tonight the payoffs keep coming. Laszlo has been telegraphing the episode’s big surprise from the moment he pulled a page from an ancient, irreplaceable and priceless book early in the season. That particular “wank-yanking” moment was over in an instant, but it made such an impact this reviewer admitted to gasping at the sound or torn pages. It was apparently intentional, even though it worked as a standalone gag. This is just brilliant. The entire sequence which shows how Laszlo has been empathically connected with Colin is extraordinarily satisfying.

To the naked eye, Laszlo has been the shallowest character in the house. But his inexplicable bond with Colin is touching, it isn’t reciprocated, which makes it even more impressive. Colin, Nadja (Natasia Demetriou) and Nandor are all self-centered and self-serving. Laszlo services himself as well, but has made it clear that service is up for grabs. Colin, Nadja and Nandor want recognition Laszlo has no interest in. Therefore, his interest in his housemates is all the more profound. But notice, he’s got a whole speech worked out for Colin’s birthday party, but only writes one word for Nandor, and it’s his name, when the time comes for the former Persian Warlord to plunge into the Vampire Super-Slumber.

Nandor’s final solution to his immortal longings is a red herring, but we are further tricked because it is obviously set up to fail, and that is the specific sleight of hand which makes the episode work so well. Both Colin and Nandor are robbed of their desires when they are delegated to background players in their own house. Everything is interrupted and overshadowed by the Worldwide Vampire Council. It consists of Dominikas the Dreadful, played by David Cross, Khandi Alexander as the Contessa Carmilla de Monet, and Donal Logue who played Quinn in Blade. He’s a real vampire now, fell in love with the lifestyle after making the movie, one thing led to another and he’s on the Worldwide Vampire Council.

Nandor can’t even get a decent couple-centuries’ Super-Slumber with the council making increasingly intrusive demands on his person. This provides two of the best comic payoffs of the installment. The first is when Guillermo wakes the master up after only about 40 minutes of super-slumber. “I’ve had orgasms that have lasted longer than that, and it’s not as fun as it sounds,” Nandor complains, in the best line of the evening. It is only topped by the revealing of his storied member, which doesn’t live up to the hype, giving more juice to the joke.

This is What We Do in the Shadows season 3’s penultimate episode, and the ending is a shock. Is this any way to celebrate Colin’s centennial? Punching a hole in his face which looks like you ripped the center out of a birthday cake? “A Farewell” was directed by Tig Fong, and written by Sam Johnson, Stefani Robinson, Marika Sawyer and Paul Simms. It ends on the most casual cliffhanger which could be a gamechanger for the entire series. The episode takes delicious twists and turns, and knocks the air out of you at the end.