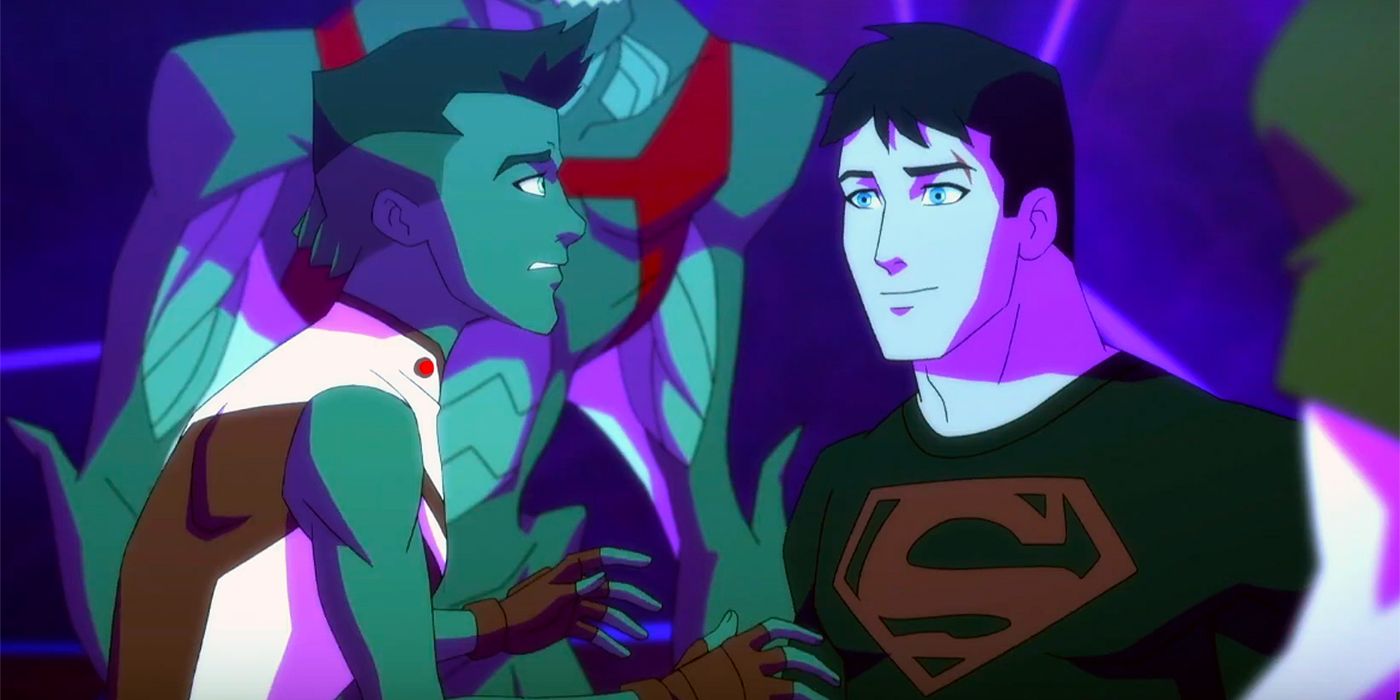 Let’s just get this out of the way now. The scene during the credits, where Superman is talking to Lois on the phone about baby Jon’s Kryptonian poop habits and his powers possibly starting to emerge, is the funniest thing Young Justice has ever done, from the subject matter to the voice acting – Superman screaming “CYBORG I NEED A BOOM TUBE” was a riot.

It was a weird tone to attach to an episode that was mostly about how shitty racism is. But tonal dissonance aside, both pieces worked fairly well.

The pace of the story slowed way down this week. We got almost no progression towards solving the mysteries of who killed the Prime Minister, who blew up the Zeta Tube, caused the cave in, or blew up the communications satellite. Instead, we got deep character work on Beast Boy, and on Miss Martian and her family. The two big plot beats were Bioship retiring and passing on her role on the team to her daughter (we’ll call her Bioship 2. Or maybe Bioship Infinite?), and a lingering camera shot on M’gann’s father as the prince was running off into a sandstorm to save Gar.

This episode turned Beast Boy’s paranoia all the way up in order to give it some resolution by the end. It doesn’t really work. His guilt is mostly based on what he perceives as a failure as leader of the Outsiders – he thinks he lost Brion, and he’s terrified of losing Superboy and other friends as leader of the new team. This might be because the show has conditioned us to understand that more time passed between seasons 3 and 4 than actually did, but that gap makes it hard to feel like these wounds would be so raw. I know “M’gann” (actually Saturn Girl meddling with the past against Legion of Super-Heroes rules) tells him it was because his brain was still bruised from the psychic blasts Gar caught when Martians in the town square tried to defend themselves against his Ma’alefa’ak form, but I just don’t feel like they sold that development all that effectively.

Meanwhile, Conner gets a quick blast of Martian Manhunter history while building the platform for the wedding, a process that involves telekinetically pouring lava over rocks Conner and Gar piece together. We find out that J’onn was actually preeeeeeeeeetty racist against red and white Martians until he left for Earth, a fact that appropriately astonished Conner and gives us one of the best exchanges this show’s ever done: “It’s good that J’onn learned racial tolerance. On Earth of all places!” Conner says.

“He did not simply learn tolerance. That is insufficient. He learned acceptance,” M’gann’s father tells him. I know they’re standing in lava during that scene, but those burns were the ones that stuck.

On the other side of the episode, we get M’gann spending quality time with her sister and mother, as they try and build the crystal canopy to go on top of the lava platform. This conversation has a lot of interesting ideas about identity – we find out that M’gann’s superhero form is her “true” form, not her Martian one, and M’gann and Em’ree fight over Em’ree not standing up for her younger white Martian siblings when they were little. It’s solid enough stuff.

The problem so far is these first three episodes feel kind of morose. Conner and M’gann’s wedding is supposed to be a celebration, but it doesn’t feel like one, no matter how many celebratory kisses they share on screen. Gar’s being a shit, Mars is racist as hell, they’re cut off from Earth with no communication (and no alternate setting for a B-plot to lighten the mood). Everything just feels kind of bad. Hopefully the Javelin’s arrival will help change the direction of the season.

Dead Space Remake: How to Unlock Every Suit
HBO’s The Last of Us: The Changes to Bill’s Story and the “Parallel Universe” of TV
Once Upon A Time Season 7 Episode 5 Review & AfterShow | AfterBuzz TV
Other Space | Comedy Sci-Fi Series | Coming Soon to DUST on TV
GoldenEye 007: Xbox Game Pass and Switch Online Release Time