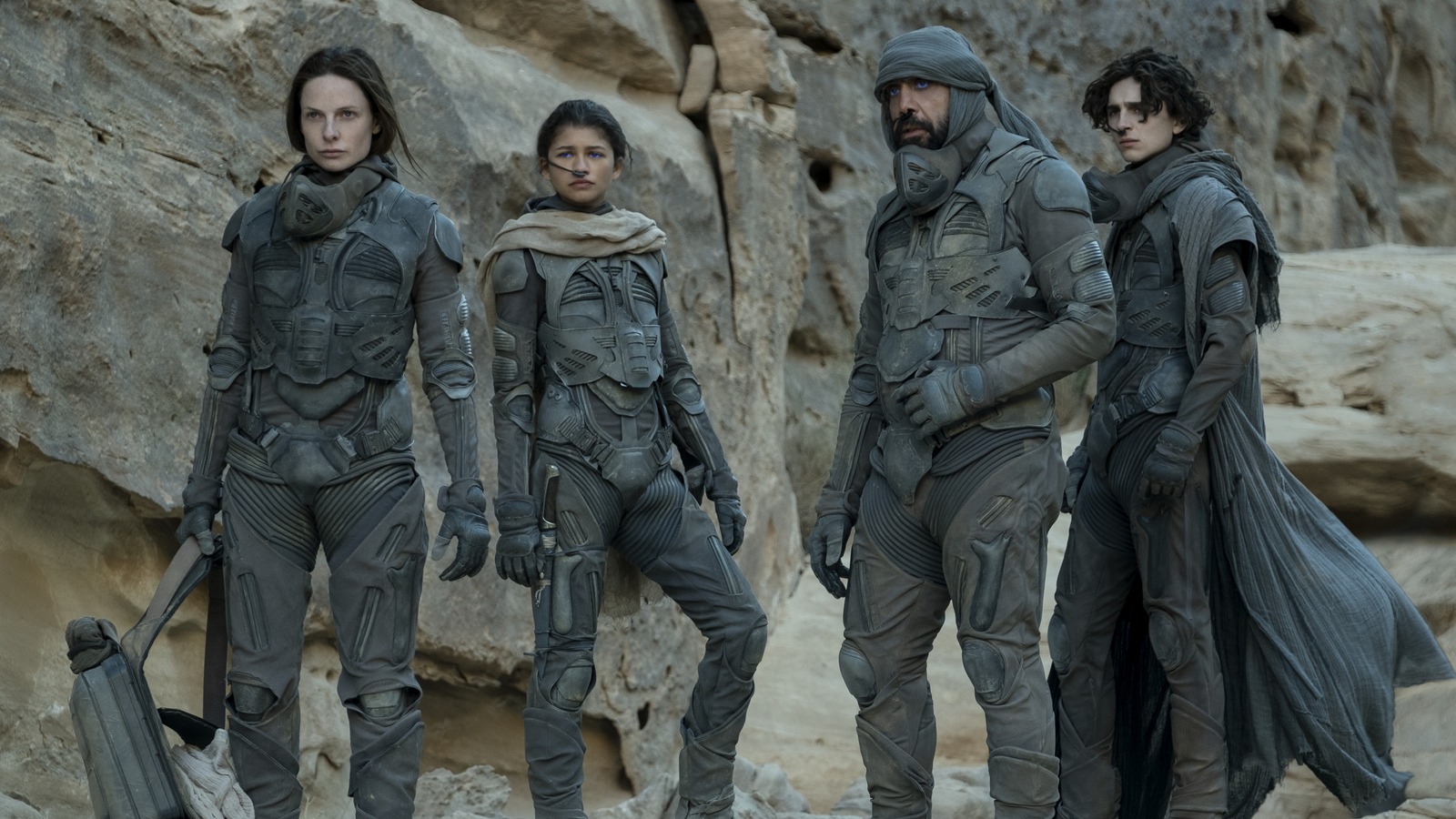 This article contains spoilers for Dune.

It’s right there in the first few minutes of the movie. As the title Dune materializes onscreen, the words “Part One” appear directly below it. But that’s not really a surprise or a spoiler for those who’ve been paying attention. Director Denis Villeneuve has said all along that his epic new adaptation of author Frank Herbert’s 1965 sci-fi landmark would be split into two films due to the sheer scope and density of Herbert’s narrative. Villeneuve has even hinted at developing a third film based on Herbert’s second novel, Dune Messiah.

In a way, the studio behind Dune, Warner Bros. Pictures, is the perfect home for such an ambitious undertaking. After all, it was a Warner Bros. subsidiary, New Line Cinema, which took an enormous risk in the late 1990s by agreeing to let Peter Jackson film all three parts of The Lord of the Rings at the same time, and later allowed the Wachowskis to do the same with The Matrix Reloaded and The Matrix Revolutions.

And yet it is quite possible—not probable, but possible—that the second half of Dune will never be filmed at all.

The Warner Bros. that took such tremendous gambles 20 years ago is not the same studio today. Instead the model for Dune is Stephen King’s It, which was also broken up into two movies in 2017 and 2019. When the first It came out, there was no guarantee that a sequel would be produced. It was thanks to the first movie’s incredible box office success that It: Chapter Two was pushed immediately into production.

There are, however, notable differences between It and Dune. Stephen King remains a viable brand name in the 21st century, even if his books don’t have quite the publishing clout they did in the 1980s when It was written. By contrast, Frank Herbert, who died in 1986, is less well-known to non-genre readers despite a continuing series of Dune novels co-authored by his son. The first It had a modest budget of $35 million while Villeneuve’s Dune is estimated to cost at least $165 million, if not more. And while the first It featured a cast of relatively unknown child actors, Dune boasts an all-star ensemble which includes Oscar Isaac, Timothée Chalamet, Rebecca Ferguson, Josh Brolin, Jason Momoa, Zendaya, Javier Bardem, and more.

The other difference—and this is the one that could help Dune in the long run—is that the first It movie arguably told one complete story. King’s massive novel took place in two separate timelines, with King alternating between them; the movie simply took the timeline in which the story’s main characters were kids and adapted that. It: Chapter Two focused on the second timeline, with the characters as adults, but with relatively minor tweaking, the first film stood very much on its own.

Villeneuve’s Dune does not have that luxury. The film ends with Paul Atreides (Chalamet) and his mother Jessica (Ferguson) abandoned in the dangerous desert of the planet Arrakis after a rival dynasty, the House Harkonnen, attacks the House Atreides and its control of the planet and its valuable mining and manufacture of the consciousness-altering substance known as “spice.”

With House Atreides smashed, Paul’s father Duke Leto Atreides (Isaac) dead, and the Harkonnens taking over the planet, Paul and Jessica seek help from the Fremen, the mysterious native people of Arrakis who live in the desert. With Paul increasingly suspected to be a long-prophesied messiah known as Lisan al-gaib, he and Jessica are embraced by the Fremen. One young woman named Chani (Zendaya) even cryptically tells them that their journey is just beginning.

In other words, Dune: Part One ends on a cliffhanger. Whether we’ll see what happens next on screen depends on several factors.

As we mentioned earlier, Dune reportedly cost some $165 million to make. That is actually fairly reasonable in blockbuster terms: the new James Bond adventure, No Time to Die, is estimated to have cost somewhere between $250-300 million, for instance, while the bill for Avengers: Endgame reportedly came out to somewhere in the region of $350 million.

But even if Dune came in at that relatively bargain price, the film still has to earn somewhere between $350 and 400 million to break even (remember, a film has to earn at least double its budget to break even, with roughly half the ticket sale earnings going to the theater owners). If costs for Dune were higher (and studios often misreport this sort of thing), then the break-even number obviously goes up—none of which takes into account marketing and publicity costs.

So the question is can Dune make that much at the box office? Early reports from Europe and a handful of Asian markets—where the film has arrived ahead of its North American and Chinese release—are cautiously encouraging, with the film earning more than $129 million at press time. Festival reviews and word-of-mouth have been mostly enthusiastic, and the trailers for the film look fantastic (as is the movie itself, which we’ve seen and loved).

But Dune is also a title that appeals to an older audience, largely male, that may be more familiar with the book and previous adaptations, including David Lynch’s infamous 1984 version and a 2000 Sci-Fi Channel miniseries (the former tanked at the box office, while the latter got decent ratings). Younger audiences have been quickest to return to theaters, which is why the film’s marketing is placing a strong emphasis on young leads Chalamet and particularly Zendaya, who is a more established star than Chalamet (he’s clearly the lead in the film while she’ll get more screen time in the sequel).

If Dune can hit that magic $400 million mark worldwide, that will almost certainly ensure Part Two is given the go-ahead. But there’s one potential obstacle standing in its way.

The Dune on HBO Max Factor

Like every other Warner Bros. release in 2021, Dune is debuting day-and-date on HBO Max on the same day it opens in North American theaters, which is Oct. 22 in this case. At this point, it is hard to say just what effect this has had on WB titles since the COVID-inspired plan was launched late last year with Wonder Woman 1984. On one hand, Godzilla vs. Kong enjoyed a better-than-expected box office run; on the other, films like In the Heights, Malignant, and The Conjuring 3 sank quickly and painfully at the box office.

It seems like a known pop culture brand such as Godzilla vs. Kong can get viewers into theaters, especially for the kind of spectacle that almost demands to be seen on a big screen. Can Dune —which is absolutely stunning on the big screen, especially IMAX—do the same? Does it have enough iconic status to lure people out of their homes? We suspect that fans of Herbert’s books will come out for sure, but more casually curious viewers will opt to watch at home.

There is an upside to this scenario too, however. Warner Bros. will not just base its decision about Dune strictly on its box office. They’ll be watching to see how many viewers do check it out on HBO Max, and the amount of streaming activity it receives could bolster the second film’s chances, even if it doesn’t do as well as hoped at the box office.

Let’s look at Godzilla vs. Kong again: while that $100 million it earned was considered a success, it’s certainly not a blockbuster by pre-COVID standards. Yet WB was pleased enough to start throwing around ideas for a sequel. Even Denis Villeneuve says that Dune would have to be a true epic-level disaster at the box office for Warner Bros. to hit the brakes on Part Two, which means that even less-than-dazzling returns, combined with solid HBO Max numbers, could help the cause. Not to mention that the studio does not want to alienate another major director after losing Christopher Nolan earlier this year over the same day-and-date backlash.

Which might explain why Ann Sarnoff, WarnerMedia Studios and Networks chair and CEO, told Deadline earlier today that the studio is currently planning on a Dune 2, even if she wouldn’t fully commit to it.

“Will we have a sequel to Dune?” said Sarnoff. “If you watch the movie you see how it ends. I think you pretty much know the answer to that.”

Still, that leads us to one more issue involving HBO Max. With hopefully the worst of the pandemic in the rearview mirror by early 2022, WB plans to revert back to a more-or-less normal, exclusive theatrical release plan for its future slate, although it will be narrowed to 45 days before the films can hit HBO Max. But will folks who watched Dune on HBO Max for free, even if they enjoy the film, be in a hurry to run out and pay to see the second half in a movie theater? The closest analogy is The Lord of the Rings, for which home video sales helped drive audiences to seek out each succeeding chapter. If people love Dune enough and can’t wait to see the conclusion, they may be willing to pay.

Getting the Dune Cast Back Together

We began by noting that whereas sagas like LOTR and The Matrix were able to shoot two or three films at the same time (a precedent going back to Superman and Superman II in the late ‘70s—also WB releases, by the way), the same did not happen for Dune. But while the filmmakers behind It were able to produce the second chapter within two years, Dune faces some different challenges.

At least they do have the story: Villeneuve has said that a treatment for Dune: Part Two is complete, and a screenplay shouldn’t be far behind. The movies are also following the novel, which is easier to do than just creating a new narrative from scratch. As for the director, Villeneuve doesn’t seem to have anything else lined up at the moment. But how long will he wait for WB. to officially greenlight the Dune sequel?

The same goes for the actors. Dune features a cast consisting of some of the busiest, most in-demand thespians around, from Zendaya to Josh Brolin to Rebecca Ferguson. Some of the first movie’s cast don’t make it out alive, so their availability is not an issue. But how long can some of them wait to get the call (contracts notwithstanding) for Dune: Part Two? What will their schedules look like six or eight months, or even a year from now?

In addition, world-building, character-building, and narrative momentum are elusive, intangible things. There’s no question that Peter Jackson and his cast benefited from filming nearly all the story of the War of the Ring in one go, with the actors able to stay in character and Jackson and his crew able to solve problems and create scenarios that would impact all three films. Can Villeneuve do the same, even if he starts shooting Dune: Part Two a relatively brief eight months from now? Can he get the team and the production back together again quickly enough to recapture the feeling apparent in the first movie?

Listen, he’s a talented guy, and he’s got a hell of a talented cast to work with, not to mention a production staff and crew that meets and exceeds Hollywood’s highest standards. But we would be lying if we didn’t admit it would’ve been preferable if WB had rolled the dice again and let the director film the entire epic in one long shoot. Because it would be a crime against cinema, against science fiction, and against the legacy of Dune itself if somehow this saga doesn’t get completed. As they say on Arrakis, the spice must flow. So let it—the sooner, the better.

Dune: Part One is out in theaters and streaming on HBO Max.