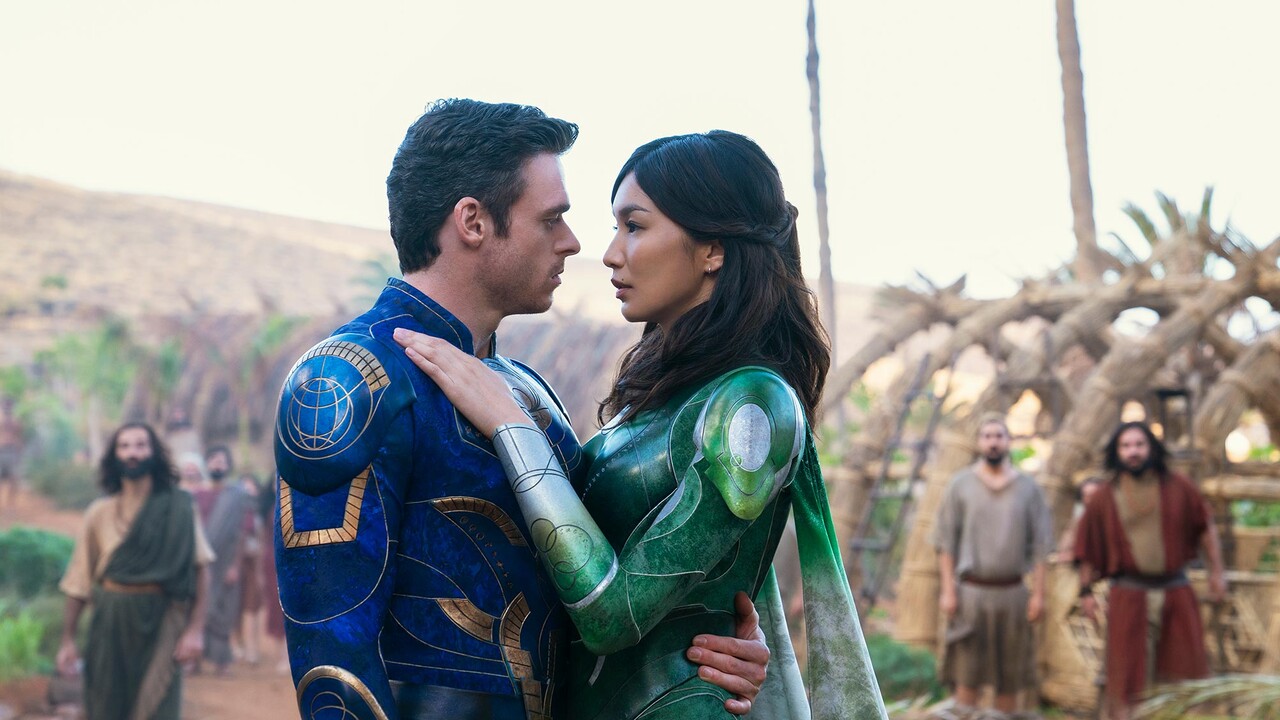 For considerable swaths of its hefty running time, Marvel Studios’ Eternals doesn’t feel much like the “typical” Marvel movie, whatever that may be. At its best, Eternals attempts to push the Marvel Cinematic Universe forward in new directions, much like Thor, the two Captain America sequels, Avengers: Infinity War and Black Panther did. While it may not ultimately be as successful as most of those films were at doing so, Eternals takes more than a few risks—almost payoff enough after 25 previously more traditional MCU outings.

The Eternals themselves are probably among the most esoteric and obscure of Marvel’s thousands of characters, largely being visible to only the most diehard readers. Created by Jack Kirby and unveiled in 1976 via a 12-issue series written and drawn by the master, the Eternals were posited as a race of superbeings who watch over Earth at the behest of their creators, the gigantic cosmic beings known as the Celestials, and protect it from the Deviants, a monstrous race also accidentally created by the Celestials.

The Eternals’ comic book mythos is long and complicated—even if they’ve appeared in print relatively rarely compared to other Marvel heroes—and it weaves together dozens of characters and storylines. Even Thanos himself is an Eternal, according to the comics. Marvel Studios has streamlined and altered the Eternals’ backstory for the screen, but it’s still unwieldy enough that the script by director Chloé Zhao, (Nomadland) and three other writers, has to work its way through a number of flashbacks and exposition dumps.

Those prove to be among the sequences that make this 156-minute origin story feel slow and even inert at times, but they’re balanced out by (ironically enough) the humanity and intimacy that Zhao and her excellent cast bring to this millennia-spanning epic.

The main narrative is kicked off in the present with the reappearance of Deviants—conceived here as the same kind of pouncing, overgrown CG monsters we’ve seen in countless other sci-fi films and not the intelligent, belligerent humanoids of the comics. This development occurs centuries after the Eternals seemingly eradicated them from the face of the Earth.

The Eternals, 10 in all, have gone their separate ways since then, encouraged by their majestic, compassionate leader Ajak (Salma Hayek) to lead their own lives while they wait for the Celestials to return them to their home planet of Olympia. But the reemergence of the Deviants and other strange occurrences force them to reassemble. As the team reunites, old relationships, tensions, and grievances flare up while the team realizes that there may be more to their mission than they ever knew.

Zhao, shooting with the same visual splendor of her previous films, yet also with more traditional compositions than those documentary-like outings required, crosscuts between the present day and a series of flashbacks that show the Eternals playing a shadow role in human history and debating just how much they can interfere in it (the rule: they can’t). We also learn the beginnings of the great romance between two of the group’s leaders, Sersi (Gemma Chan) and Ikaris (Richard Madden), an affair which has long cooled over the millennia, as well as the origins of the strange, dangerous madness that is slowly taking over the mind of powerful warrior Thena (Angelina Jolie).

Some of the Eternals seem to have adjusted well to life as retired superheroes, such as Sersi who works familiarly enough to superhero movie fans as a museum curator. She’s also romancing a fellow worker named Dane Whitman (Kit Harington). Meanwhile Kingo (Kumail Nanjiani) has found an unusual way of creating and sustaining a career as a Bollywood star for the better part of a century. Weapons inventor Phastos (Brian Tyree Henry) has also settled down to a quiet life with his human family. But the most poignant might be Sprite (Liam McHugh), who’s trapped in the body of a 12-year-old and extremely resentful about it.

It is the development of these characters and their relationships, and the largely excellent work of the cast members who inhabit them, that form the best parts of Eternals. Which conversely may make some fans looking for explosive fights and action sequences restless. The story ultimately puts our protagonists in a divisive moral quandary as well, with neither choice the “good” or “bad” one, and reasonable arguments made on either side.

The action sequences that do occasionally punctuate the story, mostly involving the Deviants, are perfunctory and marred by the near-terrible CG of the monsters themselves, some of the shoddiest work we’ve seen to date in a Marvel movie (and quite shocking from the studio that brought us the magnificent Thanos). On the other hand, a fight scene involving several Eternals squaring off against each other is thrilling stuff, mainly thanks to the character dynamics that inform it, and also because it almost gives us a preview of what an X-Men movie could look like when one finally comes to the MCU.

Speaking of the MCU, Eternals sets itself apart from its 25 cousins by rarely invoking any of them. Brief, passing mentions are made of Thanos, the Blip, and the Avengers, but this is a self-contained film and mini-universe within the larger canon, right down to the mid-credits and post-credits scenes (both of which are Marvel deep cuts, one quite good and the other feeling more like a cheap stunt). How and if the Eternals will find themselves interacting with the Avengers, the Guardians of the Galaxy, Thor, or anyone else in the MCU is a question that will presumably be answered in films to come.

The film at hand certainly plays more like a relationship melodrama than a superhero action ride, with a majestic sweep, less of the usual quippy dialogue, and a few daring moments such as an actual (albeit still modest) love scene involving two unclothed adults. The film also features, in another sequence, the MCU’s first gay kiss. And here, unlike a similar moment in The Rise of Skywalker, that kiss feels at least somewhat earned and organic, thanks again to the cast and Zhao’s way with simple human interaction.

Chan, Henry, Barry Keoghan (as the mind-controlling Druig), and Madden are all quite strong, with Chan bringing Sersi’s love for humanity to the forefront, and Madden adding imperfection to essentially the Superman of the group. Best is Nanjiani, who takes his usual comic persona in a dramatic direction as he wrestles with a painful existential conflict and blasts energy bolts from his hands. The weak link is Jolie, who does have a few good moments as Thena but, as usual, seems to be posing more than acting. Much better is a heartfelt Don Lee (Train to Busan) as her loyal friend, the super-strong Gilgamesh (in another first, the first Korean superhero in a Hollywood motion picture).

The entire cast looks quite good in their Eternals costumes and guide their characters into effective mixes of the humane and the all-powerful. Zhao lines them up in a number of stunning shots throughout the film, and gives everything a colorful, widescreen texture that should be seen in a large theater. The presence of the great Kirby is felt throughout as well in the geometric designs that pervade the technology of the Eternals and the places where they’ve left their mark on in human history.

Eternals itself is far from perfect, but—as with Shang-Chi and the Legend of the Ten Rings and shows like WandaVision—it does indicate that the Marvel movie factory is not content to rest on its already massive bed of laurels. Introducing a large new cast of mostly unfamiliar characters, giving them a complex, time-spanning backstory, and making its central conflict more personal than usual, Eternals is not exactly the arthouse fare we’ve seen before from Zhao but it isn’t a typical superhero tentpole either. When it finds the sweet spot between both is when it works the best.

Eternals is out in theaters Nov. 5.