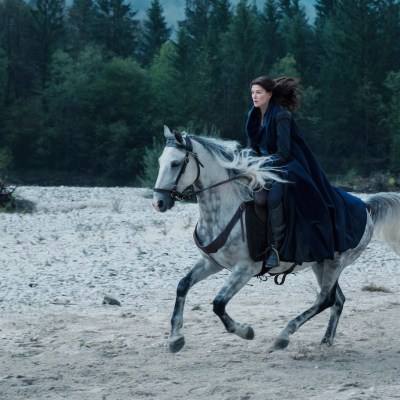 There are no dragons in The Wheel of Time. In fact, most characters in the Robert Jordan novels wouldn’t even be able to tell you what a dragon is. But assuming the mythical creatures went extinct millennia ago provides a sense of the scale for the cyclical history that gives the series its name, and one of the most notable historical figures from the long gone Age of Legends is an ancient hero who named himself the Dragon. The latest trailer finds Rosamund Pike’s Moiraine seeking his reincarnation, the Dragon Reborn.

As an Aes Sedai scholar and channeler, Moiraine begins the series uniquely equipped to track down potential candidates before they even know the importance of their own existence. To the villagers in Two Rivers, the Dragon was a powerful channeler who was among those who accidentally released the nameless evil known as the Dark One into the world. Resealing the prison tainted the male half of the One Power from that point on, and the original Dragon went mad, killing everyone close to him.

This presents a challenge for Moiraine as depicted in the trailer. How does one find the Dragon Reborn before they become corrupted by the magic touched by the Dark One? In the Jordan books, there’s a whole branch of the Aes Sedai dedicated to finding “false dragons,” men who channel the tainted source for their own advancement, claiming to be the reincarnation of the great hero of old. Moiraine’s quest, as referred to in the title of this The Wheel of Time preview, is to find the true leader and mentor him to use his power to save the world.

It’s clear from the imagery in the clip that the darkness is returning, and therefore the clock is ticking. Which of the three men pictured towards the end of the video will be the Dragon Reborn? Will it be the formidable Perrin Aybara played by Marcus Rutherford? Or is the mischievous Mat Cauthon, portrayed by Barney Harris, set to inherit the mantle? Perhaps it’s Josha Stradowski’s Rand al’Thor that will rise to prominence instead!

Whoever it ends up being, the stage is set beautifully in this latest teaser for Amazon Prime Video’s The Wheel of Time. How the journey unfolds and what Moiraine will do once she discovers the identity of the Dragon Reborn is anyone’s guess. Even those who have read the books and know who it is will be excited to see the investigation proceed, bringing suspense to what they remember as a foregone conclusion in the novels. The trick will be in avoiding spoiling it for the rest of the audience when the series premieres on November 19, 2021.

The only way you’ll get me to run is if a Allosaurus is chasing me.🦖 #short #shorts #scifi
Batman: The Doom That Came to Gotham | Trailer | DC
Dead Space Remake: How to Unlock Every Suit
James Gunn’s Plan for DC Video Games Sounds Awfully Convoluted
Why One of Star Trek: The Next Generation’s Worst Episodes Is Still Worth Watching