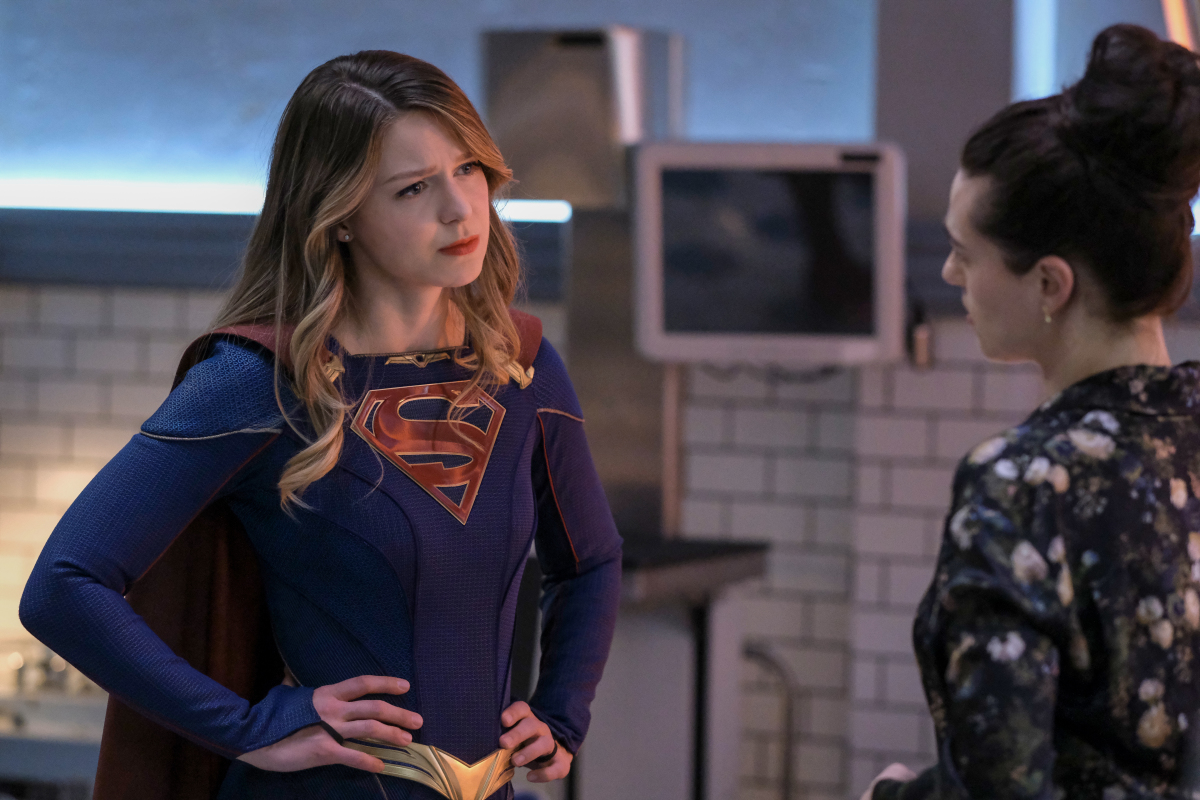 This SUPERGIRL article contains spoilers for Season 6, Episode 17, “I Believe in a Thing Called Love.”

At this point, with the Love totem upon us, we have to address the ‘ship-shaped elephant in the room. Is Supergirl actually going to go full-Supercorp on us? And if not, why spend so much of this final season queerbaiting the audience? Surely a better PR strategy would have included simpler measures, like continuing the kind of promotion Supergirl enjoyed during previous seasons.

Several times an episode, Lena and Kara have the kind of meaningful moments usually reserved for love interests. They share knowing glances, shout the same answer simultaneously, grow visibly concerned for one another’s safety, show off for each other, and wrestle with the big important issues of the episode. In this episode, we get Lena being shocked that Kara left CatCo (“But being a journalist is part of who you are!”), Lena stepping up to thwart Nyxly, and Kara encouraging the witch-in-training in her attempt to use her magic in spite of the threat Lex poses to her emotional wellbeing. When Kara decides to use the totems as weapons, it’s Lena she turns to in order to make sure her humanity is safe. In the end, when Lena comes to the tower to celebrate their victory and Alex & Kelly’s engagement, the pair make it clear how the day was won: Lena protected Kara, and Kara protected everyone else. If that’s not a leading couple, what is?

Apparently, Lex and Nyxly. Maybe. Luckily it wasn’t Lex and Nyxly’s retroactive (preemptive?) rekindling of feelings that drew the love totem, but it is worth considering that Supergirl is going out of its way to give Lex a romance here, and a possible happy ending. Love interests can be a way to redeem a villain, especially one as beloved as Jon Cryer’s Lex Luthor (who is actually already beloved on this planet in this timeline/universe, even if not by Supergirl, William, and Andrea.) It’s fun to watch Lex pout and the sheer absurdity of him going gaga for matching tracking devices is entertaining, but the idea that literally any two straight people can be thrown together at any time, with little or no pretense, yet two people with so much love, loyalty, and chemistry can’t be together because they’re both women and we’re maxed out on gays would be a frustrating way to end the inclusive series.

Meta messaging aside, loving someone else is really the only reason Lex would ever change. After all, it was only his love for Lena that ever left him compromised, and now that he has apparently found his equal, he’s bragging that sending Supergirl to the Phantom Zone was some of his best work, getting worked up over being rejected, and fixing her crystal ball. The fact that Nyxly hates men in general, deceivers especially, and men who send women to the Phantom Zone in particular is perfect, and sets up act one of a strange little time-traveling, interdimensional romance. It’s easy to assume Lex is up to something here, and he does love toxic relationships, but he also made a real sacrifice for Nyxly by saving her life instead of protecting the totem. She begrudgingly agreed to be friends, but Lex back on his heels and doing things like feebly saying, “uh…I love you,” to an empty room is hilarious, so here’s hoping the imp keeps him guessing a little while longer.

Thankfully, the prime couple spot of the episode belongs to Alex and Kelly, who had their fair share of adorable moments, starting with Alex, Kara, and J’onn giggling about the engagement ring and Esme helping Alex plan her proposal. The fact that Kelly had the exact same plan is a sweet way to resolve the episode’s true nail-baiting mystery of who managed to book Al’s. And of course it’s always fun to see a reminder of the fact that the couple who heroes together, stays together.

Brainy and Nia were mostly in the background of this episode (yet another couple that makes a bit more sense than Lex and…anyone) but the writers set up some interesting directions here. Brainy had a visceral reaction to Lex’s arrival, the most drastic one other than Lena’s. Lex was hiding out in the future, but Brainy still spends the entire episode hesitating to call his Legion buddies for intel. Bringing back Brainy’s shaken trust in himself makes sense – his rigid adherence to logic and the future led him down a dark path the last time he mixed Lex Luthor and news about the fate of the world. But Nia is right: the best way out is trust. Keep everything above board and tell his teammates everything.

What’s more concerning is the direction Kara’s headed in. During the back half of the season she’s repeatedly come to crossroads and decided that the riskier, more violent, less hopeful road was the correct way, deviating from the values we know she holds dear. Time and again Kara stares into the abyss and decides to move toward it, and this time she wants to use all the totems, doubling down on violence and using a lot of rhetoric about “war” and “firepower” that sounds entirely unlike her. She’s clearly aware of this departure, since her phantom dream was about losing her humanity. However she apparently decided that using these implements of violence will be fine in her hands because she’s a good person and she has her family, including Lena, who will pull her back. It’s…a theory, but not one that sounds much like the Supergirl of the previous five seasons.

In other news, overbearing boss Andrea is back in a catsuit and hopefully reading I Love Lexie’s diary as she looks for evidence to steal. Perennial gentleman-in-distress William has either flipped Lex’s longsuffering henchman-cum-board member into being a valuable source, or he’s going to need to be rescued yet again. Don’t forget that Kara still hasn’t passed the Courage gauntlet, and it turns out that the Hope gauntlet isn’t gone after all. Thanks to Lex we know you can destroy the shell, but the essence will flow into something new. And the new Love totem is, fittingly enough, Esme herself. Rut roh.

Xbox’s Lack of Exclusives Has Been a Real Problem For the Series X/S Generation
Even More DC Shows Have Been Axed at HBO Max
Marvel Studios’ Doctor Strange in the Multiverse of Madness | Get Tickets Now
The Last of Us: What Happens to Bill and Frank In the Game?
Xbox Game Pass: Every Day One New Release Coming In 2023