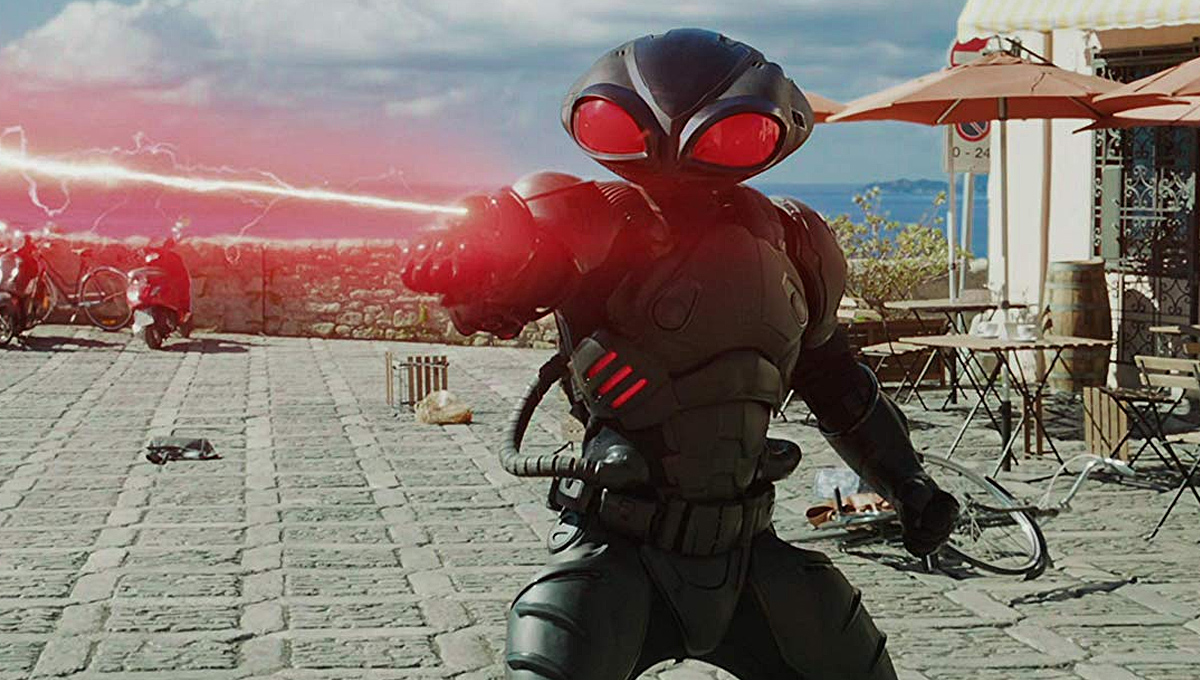 While it might be a tad dramatic to call the success of 2018’s Aquaman a surprise, the movie did overcome a stigma from the initial failure of 2017’s Justice League to become the highest-grossing entry in the DC Extended Universe with nearly $1.5 billion worldwide. The studio’s expected knee-jerk reaction to this success—besides a green-light for a sequel—was to develop a spinoff, which led to an early-2019 report about a project centered on the monstrous denizens of dark-dwelling sea kingdom the Trench. However, said spinoff was apparently a ruse designed to hide the project’s real focus: Yahya Abdul-Mateen II’s film villain, Black Manta.

As it turns out, the trade-touted existence of Aquaman spinoff project The Trench, which was widely taken as gospel for nearly three years, never actually existed—at least not in the way it was reported. That bit of debunking recently came straight from director James Wan in seemingly casual fashion on his Instagram when discussing Mateen’s Black Manta, who’s set to continue his vendetta against Jason Momoa’s eponymous Atlantean king in 2022-scheduled sequel Aquaman and the Lost Kingdom. Yet, according to Wan, The Trench was really just a cover for a Black Manta villain spinoff movie.

“I’ll let you in on a secret,” says Wan, prefacing a major disclosure in response to a fan. “[T]he canceled Trench spin-off movie was really going to be a secret Black Manta movie.”

Specifically, James Wan’s comments debunk a February 2019 report from THR claiming that The Trench was in development over at Warner, which had purportedly tapped newcomer screenwriters Noah Gardner and Aidan Fitzgerald for the script, with director Wan and Peter Safran set to produce. The ersatz project was being touted as “horror-tinged.” This would have been doubly-appropriate for the horror-minded wheelhouse of Wan and the project’s prospective characters, since the Trench’s inhabitants are essentially humanoid hybrids of piranha, and terrifyingly swim in schools massive enough to intimidate any Atlantean army.

The Trench—created by Geoff Johns and Ivan Reis in in Aquaman Vol. 7 #1 for DC Comics’ New 52 relaunch—have frightening physical attributes that are the result of the ancient catastrophe known as the Great Fall, which, as Willem Dafoe’s Vulko explains in Aquaman, forced the formerly-surface-dwelling society of Atlantis to live and adapt to life underwater, after which the population separated and evolved in (radically) various ways due to their chosen new environments.

While we now have clarity about the secret Black Manta project, which was nixed earlier this year, it still leaves us with questions—mind you, not about the obvious feasibility of a Aquaman Black Manta spinoff, but why such a proposition needed a bizarre cover story in the first place. For all the plot points that Aquaman had to cover—from Arthur Curry’s origin story, his complicated family drama, his romance with Mera, and even an inter-Atlantean royal feud with half-brother Orm/Ocean Master—the film’s presence of Mateen’s pirate-turned-supervillain, David Kane, seemed like a planted side story seed destined to sprout a dedicated storyline—either in the obvious sequel or one of the various spinoff movie projects being developed by Warner before the pandemic. In fact, one could argue that the obscuring story of a Trench spinoff sent all the wrong signals to the public, especially since it seemed to validate the rudderless perception of the DCEU, for which studio suits appeared intent on chasing underdeveloped, quickly-delivered franchise goals.

With Wan’s reveal not coming with any details on Black Manta’s plot, we’re only left to speculate on the source of the Trench angle. One theory might be that the trade report was only privy to part of the project’s plot design, and it could be the case that the spinoff would have depicted its titular character as an antihero protagonist in a struggle involving the Trench, which would somewhat salvage the veracity of the report. However, it could also be the case that, had the project had actually moved forward, the bizarre, seemingly-inaccessible notion of a DC movie centering on piranha people from the deep—ones that comparatively make The Creature from the Black Lagoon’s Gill-Man look like a posh magazine cover model—was always designed to facilitate a shocking, headline-making moment in the entertainment news sphere upon an ultimate reveal—perhaps put aside for a FanDome event—of the head-scratching project secretly being a Black Manta movie, potentially providing a kind of publicity that money can’t precisely buy. If that’s the case, then Wan just let a serious cat out of the bag—dead as it may be.

Regardless, the ongoing exploits of Mateen’s Black Manta are guaranteed to continue on the big screen in Aquaman and the Lost Kingdom. It’s an idea that was essentially sealed with the first film’s tangential storyline focused on the character’s arc, which started in the first act after his father is accidentally killed when his attempted act of submarine piracy was foiled by Aquaman. This led to the vow of revenge he (unsuccessfully) attempted to fulfill with tech he quickly developed, fully-realized as Black Manta. However, with Aquaman forced to fry much bigger fish in that film, the fulfillment of Manta’s first-movie arc was relegated to a mid-credits scene in which he is shown meeting with Atlantis-obsessed, conspiracy-minded marine biologist Stephen Shin (Randall Park), sealing an alliance of enmity against Aquaman for the sequel.

Aquaman and the Lost Kingdom is set to bring star Jason Momoa for more maritime madness, with the film scheduled to hit theaters on Dec. 16, 2022.