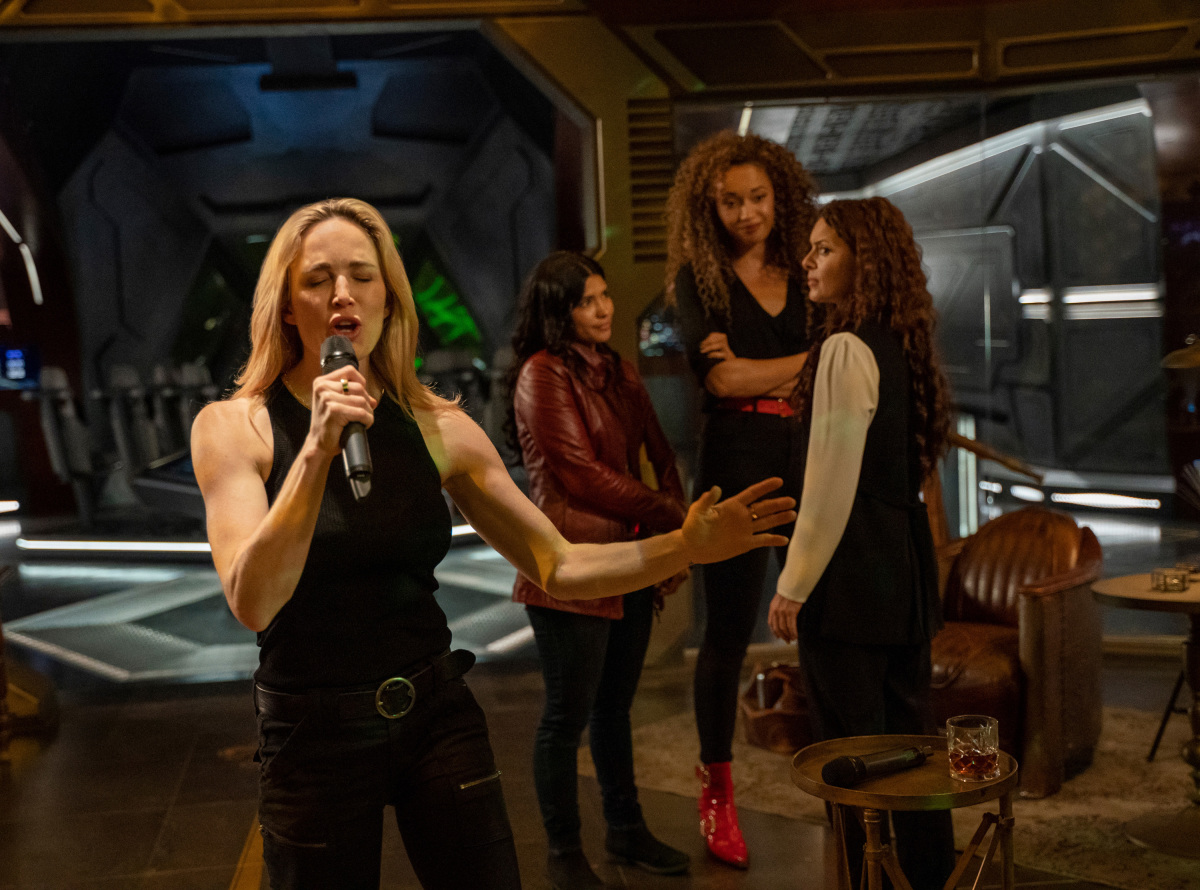 What DC’s Legends of Tomorrow just pulled off should be impossible. Usually milestone episodes are treacly retrospectives, bordering on clip shows, that are self-congratulatory throwaways. They’re not supposed to be high points of the entire series. But that’s exactly what Legends of Tomorrow episode 100 was: easily one of the best episodes this show has ever aired. It might even be the outright best.

There are two neat tricks that they used to pull this off. The show’s standard self-awareness allowed the writers and actors to layer in commentary about its growth, particularly about the (in retrospect) pretty dreadful first season. And the episode was placed in the hands of its two oldest hands: original cast member Caity Lotz directed, while the show’s other (completely unheralded) remaining original cast member, Amy Pemberton, was its emotional center. And she nailed it.

The plot is a bit thin. In true Legends fashion, Astra, Spooner and the newly embodied Gideon, trying to hitch from Texas to New York, are distracted by a pie on a windowsill. Their debate about whether they should steal said pie causes Gideon’s programming to conk out, and Astra and Spooner spell cast their way into her brain. There, they encounter a mysteriously British Jax (the returning and actually British Franz Drameh), who explains that the real Jax did so much maintenance on Gideon that she subconsciously internalized him as her brain’s protector. Brit Jax then sends Astra and Spooner on a trip through Gideon’s key memories, to help her remember who she is, then to help chase out a virus that had been causing her to forget.

We go through all the relevant eras of the team, with really delightful notes for so many returning characters. Brandon Routh is back as Ray Palmer, being friendlier than ever. Victor Garber returns as Dr. Stein, singing show tunes – in story because he just discovered he’s a grandfather, though it’s a nice nod to him departing the show for Broadway. Wentworth Miller is back as Captain Cold, devouring the scenery like he never left. Courtney Thorne and Arthur Darvill come back as their best selves – Nora Darhk being delighted to hang with the team, Rip Hunter actually inspiring Gideon rather than just hectoring the team. And Falk Hentschel returns as Hawkman, only this time he’s actually entertaining, and not just a growly wet blanket.

But the best surprise is Gideon herself. Pemberton is given so much to do – she’s a computer learning to express human emotions for the first time, and we’re allowed to see them rather than just hear them in the slight modifications of her voice. They’re all so good. Each memory we go to is a piece of what took her from a computer program to a full person. Seeing these moments again was wonderful, but seeing them through Gideon’s eyes was revelatory. Then watching her fight to integrate the good and the bad was a highlight performance, one of the best this show has ever seen. Pemberton picked a hell of an episode to stop being a hidden gem and start being a regular one.

To me, the best parts of the episode were the quieter ones, the scenes that weren’t attached to a season or a villain or an event in Legends history. Gideon drunk at book club diming out Constantine for going to see Harry Potter in theaters was hilarious. Pemberton and Lotz were terrific in their sorta-karaoke duet.

And the show veered hard back into its Parks & Rec-but-superheroes, nice people being nice to each other vibe with April Fools’ Day. As time travelers, they’re usually never actually anywhere for holidays. Literally – they miss holidays because they don’t visit those dates. So apparently they celebrate all of them together on April Fool’s Day. This is such a good Legends of Tomorrow character and worldbuilding moment, along with a truly wonderful time travel note that I don’t think I’ve ever seen anywhere else.

That said, there is one pretty big development tonight. Bishop is back. Somehow, in the show’s 100th episode, the Legends finally created a time paradox. Bishop’s flash didn’t take, and not only does he remember helping the Legends in 1925, but he also has a spare copy of Gideon’s hard drive. It’s now an even money bet that he’s behind the alternate Waverider.

But that all takes a back seat to how emotionally effective and just plain nice this episode was. I was delighted from start to finish tonight. This was one of my favorite episodes of television of all time.