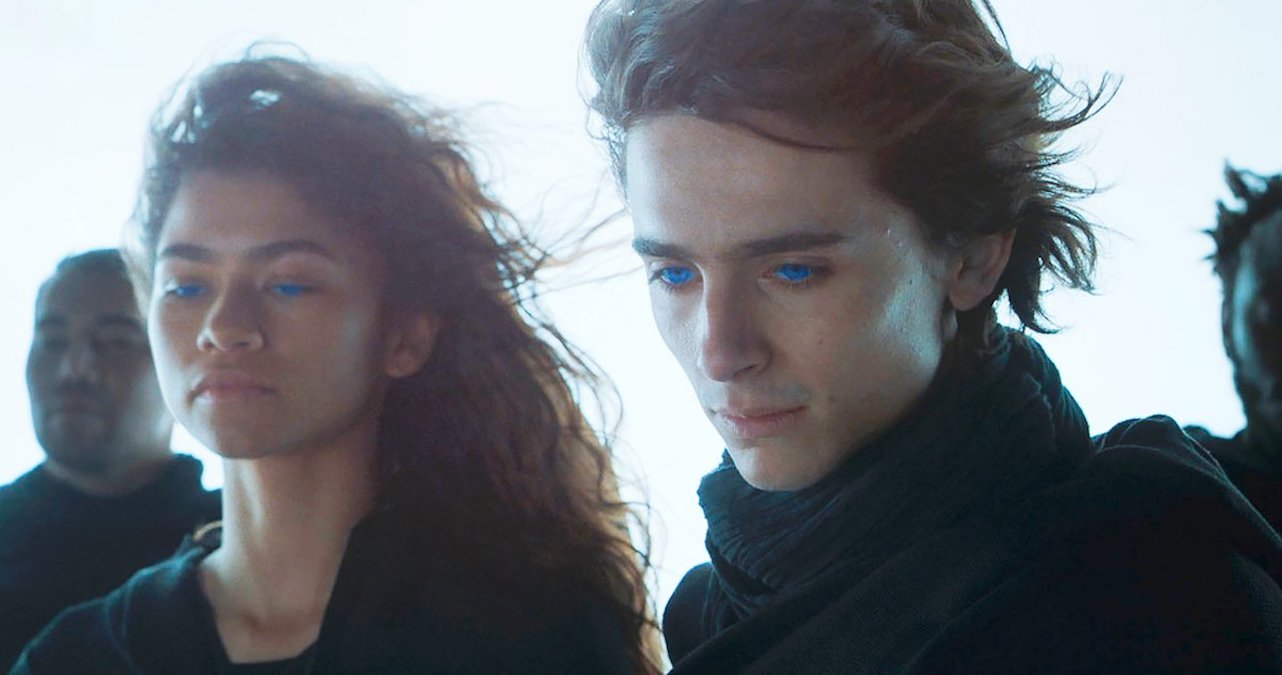 So you’ve probably heard that Zendaya doesn’t have a whole lot of screen time in the new Dune movie. Despite the actress being upfront with the press and saying months ago she was only on set for four days, folks have been noticeably flabbergasted on social media that the popular star’s role was barely more than a cameo in the first half of Denis Villeneuve’s two-part adaptation. She mostly comes to the character Paul Atreides (Timothée Chalamet) as an ethereal vision in his dreams, before vanishing when he awakes. That is until he meets her in real life, and she’s holding a weapon on him at the end of Dune: Part One.

For fans of the novel, this was hardly surprising. The character that Zendaya is playing, the Fremen warrior Chani, doesn’t have a significant part in the story until after House Atreides has fallen, and young Paul and his mother Lady Jessica (Rebecca Ferguson) are forced to flee into the desert to survive. It is there they first truly interact with Fremen society; it is there that Paul meets Chani. Thus it always seemed likely Zendaya’s role would be a tease for things to come, assuming of course Villeneuve got the chance to adapt the second half Frank Herbert’s sprawling source material.

Well, we now have confirmation that Villeneuve is indeed making Dune: Part Two and that it’ll be here in two years, arriving on Oct. 20, 2023. So obviously the stage is set to finally get a better idea of who Chani is… and also for both Villeneuve and Zendaya to build up her role so that it’s more than even what appeared on the page.

It is probably controversial to tell any fan that changes need to be made to beloved source material, but in the case of Chani, there’s plenty of room for improvement. She can be more than simply Paul Muad’Dib’s beloved.

In the book, Paul and Chani’s first encounter is more or less what we see in the movie, with her revealing that she was watching him point a gun on other members of her Fremen Sietch, and that she was ready to kill him if need be. But on the page, that initial skepticism toward the one who supposedly will become the Lisan al-ghaib (“Voice from the Outer-World”) is almost immediately disarmed. After Paul and Jessica reach the hidden Sietch ruled over by Stilgar (Javier Bardem in the movie), Chani quickly learns that her last surviving parent, Dr. Liet Kynes (Sharon Duncan-Brewster), has been murdered by the fearsome Sardaukar. She mourns the death. Chani is then one simple acid trip away, fueled by pure, undiluted spice melange, from being mind-melded with Paul. Both fall passionately in love.

From that point on, Chani becomes a predominantly passive character, following Fremen customs that require her to stay hidden with the other women and children in a more remote Sietch while Paul is off having messianic adventures and riding a Sandworm. It’s frankly a bit underwhelming and leaves the reader wanting more from the character. Luckily onscreen, that improvement appears to have already begun…

Chani Is Our Eyes into the Fremen World

If Paul Atreides is the Voice from the Outer-World, then Chani is being positioned by Villeneuve to be the eyes into the inner-one. That was clear from the revised prologue and introduction at the top of the film. In the original text—as well as David Lynch’s 1984 film—the first character we meet is technically Princess Irulan, a young woman who now won’t appear in the new movies until Dune: Part Two. Irulan is the daughter of the Padishah Emperor Shaddam IV, and a trained Bene Gesserit herself; she is regal and a proud patrician who provides a seemingly authoritative perspective on the events of the story, which she recounts the official history of.

This framing device is fascinating in the book since it’s used at the top of nearly every chapter and ultimately foreshadows events before they occur, as if they are the predestined results of great men doing great things—which by design creates cognitive dissonance for the reader as they come across increasingly more ambiguous moral conundrums as Paul’s journey continues.

However, in Villeneuve’s film, the audience is immediately thrown into the larger political and ethical dilemmas during the first scene when we enter Arrakis not from the gaze of a distant ruler, but rather through the eyes of one of its many oppressed inhabitants. Zendaya’s Chani tells us first about the beauty of Arrakis—something no one among House Atreides’ courtiers seems to notice—and waxes poetic about the glow of spice floating in the twilight. She then immediately views the menace of the villainous Harknonnens not from the perspective of another great house or rival, but from the ground and looking up. When the Harkonnen spice harvesters arrive, they resemble enormous boots being pressed against the Fremen’s neck.

We have an instant visceral repulsion toward the villains and feel the need to sympathize with the underdogs as embodied by Zendaya’s spice-blue eyes. It also brings quick suspicion toward the ostensible heroes of the first Dune movie, House Atreides. Herbert’s novel gradually clues the reader into the fact that both the Atreides and Harkonnen are there to exploit the Fremen, and the indigenous population has little reason to favor either oppressor. But in the movie those stakes are drawn in stark cinematic lines before the story can properly begin.

This perspective should be expanded upon for Chani, both in her inevitable courtship with Paul—which will certainly have more time to organically develop than it did in Lynch’s ’84 movie where Sean Young’s Chani was even more of a cipher than her literary counterpart—and also how she interacts with this world. The hard gaze Chani reserves for the Harkonnen at the beginning of the film is a promise of resentments yet to be fully voiced.

In Dune: Part Two, we should hear them articulated and given proper floor space. If the second film will see Paul grapple with controlling his growing messianic influence, and attempting to prevent it from turning into a death cult, then the hardships and grievances he’ll seek to build an empire from need to be given a clearer voice for viewers. That will come also from Bardem’s already aloof and charismatic Stilgar, but it should also come from the woman he’ll proclaim to love and take as his own concubine.

Chani Should Be Among Paul’s Closest Advisors

Herbert wrote Dune over several years in the early 1960s. At the risk of being glib, it was a different time with different gender politics. Which might be one reason Chani can be introduced as a Fremen warrior who is quick with a knife, but then be almost as swiftly reduced to staying back and watching the children grow up while the men play at war.

It’s a contradictory message in Herbert’s world-building about Arrakeen customs, but one which feels in line with the moment in time the book was written in. However, given the final line of the book, and its celebration of the women of its story, including, Lady Jessica who goes on a great journey of her own in the second half of the Dune novel, there is room to expand on Herbert’s championing of “the concubines” as more than their unfortunate title.

Paul’s holy war, which begins against the Harkonnens, is a years-long affair that includes a rotating entourage of advisors and counselors, chief among them being Lady Jessica, Stilgar, and eventually another old familiar face Paul will have thought he lost. Allowing Chani to be on equal footing in these scenes has already been hinted at as she stands by Paul’s side as he more or less condones murder in his name during a vision in Dune: Part One.

If the Fremen are a warlike culture, let the Fremen who is closest to Paul’s ear be the one that urges on the crusade that is to come. When we left Paul at the end of Part One, he is still reluctant to use his power to its fullest, bloodiest extent. He even mourns the man who so desperately wanted him dead that he challenged Paul to a needless duel. And yet, as we can tell from his visions, his decision to not only live with the Fremen but also embrace his role as the Lisan al-ghaib leads to a path drenched in blood.

The Fremen have been oppressed for generations by the Harkonnen and left to hide among the dunes. The political subtext of this narrative in the wake of a hundred years of western misadventure and bloodshed in the Middle East is as glaring as the sun on Arrakis’ sand. Still, Paul basically marries into this insurgent and aggrieved culture, having Zendaya give voice to those anguished, and the choices Paul eventually makes, will provide better drama in their dynamic onscreen, and get audiences to see Arrakis from the blue eyed point-of-view.

It also would be nice for one of the stars of the movie to have more than about six minutes of screentime!

Dune is in theaters and on HBO Max now.