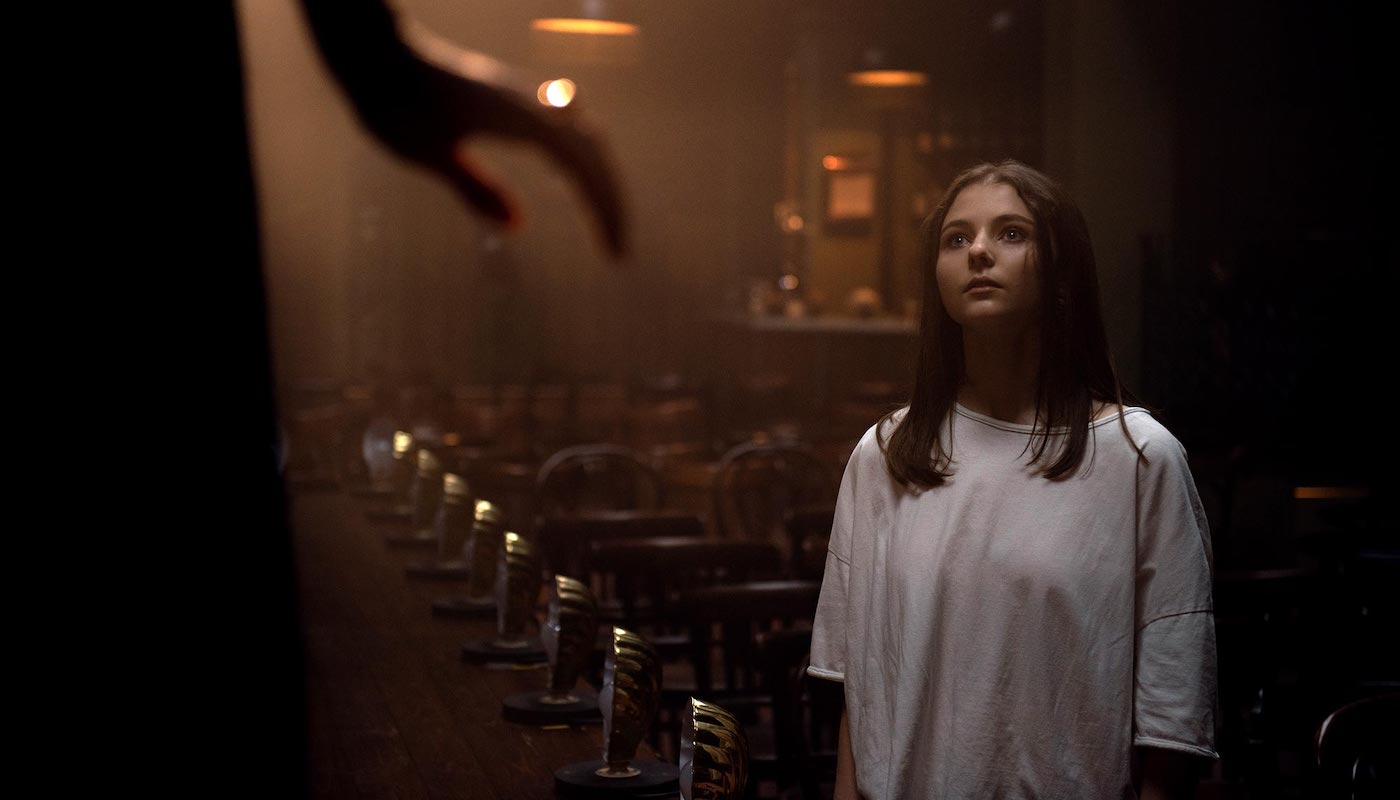 This article contains Last Night in Soho spoilers. Our spoiler-free review is here.

It takes less than a minute to realize just how much Thomasin McKenzie’s Eloise adores the ‘60s in Last Night in Soho. Strutting into her childhood bedroom as Peter and Gordon’s “A World Without Love” plays (on vinyl, of course), the star of the new Edgar Wright movie is wrapped up in a dress she made out of newspapers—one might even speculate she’d use vintage ‘60s NME magazine covers if she could afford it. Nevertheless, she looks fabulous while basking in her shrine to her grandmother’s generation.

Obviously, like her film’s director, Ellie is a person intoxicated by the idea of the “youth decade.” And in case you miss the inspiration for her sleeveless periodical gown, Ellie strikes a pose right in front of a poster of Breakfast at Tiffany’s where Audrey Hepburn is in a similar position and wearing a similar design, only hers is a little black Givenchy number. For even folks who’ve never seen that 1961 film, it’s a legendary image that instantly communicates urbane glamour. Yet that cognitive dissonance between recognizing a famous movie poster but not what that movie is about gets to the heart of the dread in Wright’s new thriller.

To this day, few college students who populate their dorm rooms with similar posters of Hepburn’s Holly Golightly would ever know that her ultimate good time girl persona is a facade in that film—a mask Holly wears to cover up that she’s a call girl who gets $50 to “powder her nose” from nearly every man she dates. It is a subtlety in the ’61 film, not least of all because the filmmakers could only get so much past American censors at the start of the decade, but one which is completely divorced from images of Golightly in the Givenchy dress sipping champagne as she gaily laughs over the counter of a Fifth Avenue jewelry store.

This irony about Eloise modeling herself after the fictional Holly character before doing the same with the ghost of Anya Taylor-Joy’s Sandie, another young woman whose life is actually far less glamorous than it first appears, is not lost on filmmaker Wright. In fact, when we chatted with him last month, he told us about all the ominous easter eggs of that otherwise sweetly innocent opening scene.

“I’m a big fan of Bob Fosse, full-stop,” Wright says when we mention another clear influence on Last Night in Soho: Bob Fosse’s movie version of Cabaret (1972). That film, which is also about a struggling lounge singer whose seedy life in Weimar Germany is less sumptuous than it initially appears, was just one in a series of Fosse favorites for Wright, who also lists All That Jazz (1979) and the film version of Sweet Charity (1969) as among his favorites.

“I love Sweet Charity, and there is a Sweet Charity poster in Eloise’s room at the start of Last Night in Soho,” Wright reveals. “And not just the Sweet Charity movie poster with Shirley MacLaine but also a photo of Judi Dench playing the character in the West End production of Sweet Charity is on the wall.”

For Wright the irony of Ellie idolizing media like Sweet Charity—which is about a “taxi dancer” who is paid a lump sum for every dance she will provide male patrons—gets to the shadowy underbelly of Last Night in Soho, and the danger of Eloise’s infatuation with the past.

“There’s something about the poster for Sweet Charity and Breakfast at Tiffany’s that speaks to the theme of the movie,” says Wright. “It’s that thing where the further you get away from it—like Breakfast at Tiffany’s becomes a famous poster that people own, and they might not have seen the movie. Do you know what I mean? It’s about Audrey Hepburn and Holly Golightly, and ‘Moon River,’ and then actually the darker side of the film gets forgotten. [It’s the same with] people that have posters on their wall for La Dolce Vita and have never actually seen it or realized what a savage satire of that scene it is.”

He continues, “So in a way, that was the thing. Eloise has on her wall Sweet Charity and Breakfast at Tiffany’s, both ‘60s iconic classics that both have a darker side to them that people often forget.”

Remembering the darker, uglier truths behind our nostalgia is of course at the very core of Last Night in Soho. Taylor-Joy’s Sandie could be a sister to Holly Golightly: women who provide an ethereal and almost otherworldly magic to any room they enter. But that affectation is still just a mask created by girls who came to the big city with big dreams. It can hide the horribly real sorrows, which multiply when trapped in an unfair game next to men in bespoke suits, but the mask cannot cover the soul-draining despair the young woman is truly enduring…. although Sandie has a much sharper solution for dealing with these rats than Holly did.

In this analogy, Wright freely admits he is the Eloise of the story, saying he made Last Night in Soho to “cure” himself of his golden age thinking toward ‘60s London.

“There are ways that I’m like Eloise,” Wright concedes. “There’s definitely moments in the film where Eloise, in a very puppyish sort of way, is talking excitedly about the decade to somebody who was there. And I’ve done that to people whether it be actors or people in a film where you’re going, ‘Oh wow, the ‘60s must have been so cool, right?’ And I feel like the answer from them is always, ‘Yes… dot, dot, dot, dot.’ There’s always a dot, dot, dot, because yes, great things happened but also terrible things happened, as well.”

Both of which are heavily implied in that idyllic Sunday afternoon in Ellie’s bedroom.

Last Night in Soho is now in theaters.