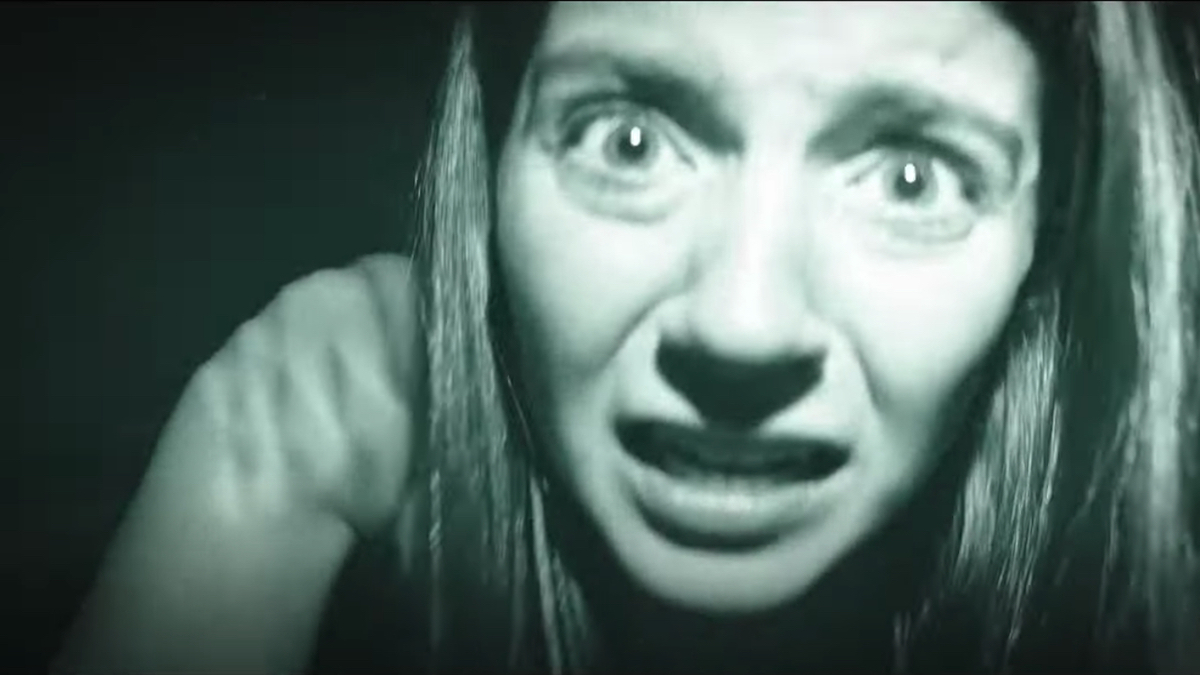 It’s been six long years since we last saw the shaky, handheld footage of a Paranormal Activity movie. Which by the measurement of Hollywood franchises is probably four or five years too many. That might explain why the franchise’s soft reboot in this weekend’s Paranormal Activity: Next of Kin seemed like a no-brainer for Paramount Pictures as it was developing original content for the new streaming service Paramount+.

Be that as it may, Next of Kin—or Paranormal Activity 7 for those who are still keeping count—is really a different animal from the previous six movies in the saga. For starters, amateur filmmaking equipment has really made leaps and bounds in the last decade, particularly since the original and still spooky haunted house film, which was shot way back in 2007. But more than just the smoothness of the camera work, which is now shot by aspiring documentarians on GoPros, drones that appear and disappear at the film’s convenience, and even what looks like a phantom Steadicam, this movie feels only tangentially related to the mythology about demons and cursed family members from the original saga.

Instead this feels like a rather generic “found footage” horror movie made by folks who clearly enjoyed M. Night Shyamalan’s The Visit and perhaps Ari Aster’s Hereditary, and decided to do that with a GoPro. And yet, it doesn’t feel any smarter or scarier than the nonsense we were watching by the time the franchise got to the “Ghost Dimension.”

The self-described documentarians of Paranormal Activity: Next of Kin are Margot and Chris (Emily Bader and Roland Buck III). Despite seeming happy and well-adjusted, Margot is allegedly haunted by the fact she grew up adopted after her mother abandoned her as a baby on a hospital’s steps 23 years ago. And now that a cousin named Samuel (Henry Ayres-Brown) has found her on an ancestry website, she’s discovered she has a large Amish living family several states over. So, in spite of proclamations about being shy around cameras, she and old buddy Chris decide to make a feature length documentary about her driving up to the boonies and reconnecting with her mysterious past.

Make no mistake though, they are serious about turning this into a doc, even hiring a sound guy named Dale (Dan Lippert) to tag along and up the terrified faces since Chris is mostly behind the camera. Dale also provides needed comic relief as Margot meets her grandfather Jacob (Tom Nowicki) and a whole litany of severe-looking relatives who want to teach her about the old ways. Even so, there are some things they keep among themselves—like that church in the middle of the woods which is locked away from the cameras and non-believers; there’s also those strange rituals they claim are “bear hunts” that involve torches in the woods every night. And why can only Margot hear the thumping of footsteps in the empty attic upstairs at night?

You might have a hunch before she and her cohorts do, but no matter how long it takes for them to figure out something supernatural is afoot, you can rest assured that the cameras will never stop rolling.

So, yes, Paranormal Activity: Next of Kin is a return to the found footage subgenre of horror, which has slowly been abandoned in the last five or so years. I consider this partially a shame since despite the justified groans many make toward the gimmick, there have been more than a handful of excellent chillers which utilized the storytelling device: The Blair Witch Project that popularized it in 1999, the aforementioned The Visit, and even the first Paranormal Activity movie from nearly 15 years ago are all creepier than you probably remember.

Sadly, Next of Kin won’t make you nostalgic for anything lest you get wistful for all the eye-rolling you did back when Paranormal Activity 4 was the biggest horror movie of the Halloween season back in 2012. One even wonders if director William Eubank (Underwater) wanted to make a found footage movie, because there are more than a few scenes which seem to forget the limitations and constraints of their premise. There’s that drone that’ll only appear when the filmmakers want a traditional establishing shot but vanishes at all other times, for example.

More incredulously, whenever the movie needs an insert shot of a ghoulish face or breaking chain, it’ll lazily go ahead and include it despite no character with a GoPro being there to film it. Of course found footage films are often contrived in their attempts to explain why someone would keep shooting, but there is a special kind of half-heartedness in this approach that suggests the film was never intended to be more than streaming service product—a likelihood only further accentuated when the movie abandons its own internal logic during pivotal plot points.

Take for example when our less than wise trio of filmmakers discover a veritable mineshaft that drops a hundred feet into the dark. The first time they discover it, it takes at least two of them to make the hilarious choice to tie Margot to a dubious pulley system so she can explore what looks like an open gate to hell. Genuinely, the choice to go spelunking in what’s obviously a killin’ hole is akin to the cast of Jaws wondering what would happen if they did stick their heads down the shark’s gullet. Nevertheless, when the set-piece pops up again later, one character can do it all by themselves after we’ve already seen it established it takes two people to operate this death trap.

It all plays as both perfunctory and somewhat unfinished, as if the real filmmakers didn’t have enough production days or time with the cast to keep their ramshackle plot together.

Even so, there’s a certain B-movie charm about it all. Screenwriter Christopher Landon has written and directed better horror fodder in the past, including Happy Death Day and Freaky, and he brings a light enough touch to the characterizations in this flick to keep you engaged if appalled with his dimwitted heroes. Bader, Lippert, and Buck III also do serviceable work at embodying contenders for the Darwin Awards.

If you’re looking for some lightweight spooky content this Halloween weekend, you could do worse. But considering really good chillers like Lamb are now on streaming, and Edgar Wright’s hypnotic Last Night in Soho just opened in theaters, you can also do a lot better.

Paranormal Activity: Next of Kin is now streaming on Paramount+.