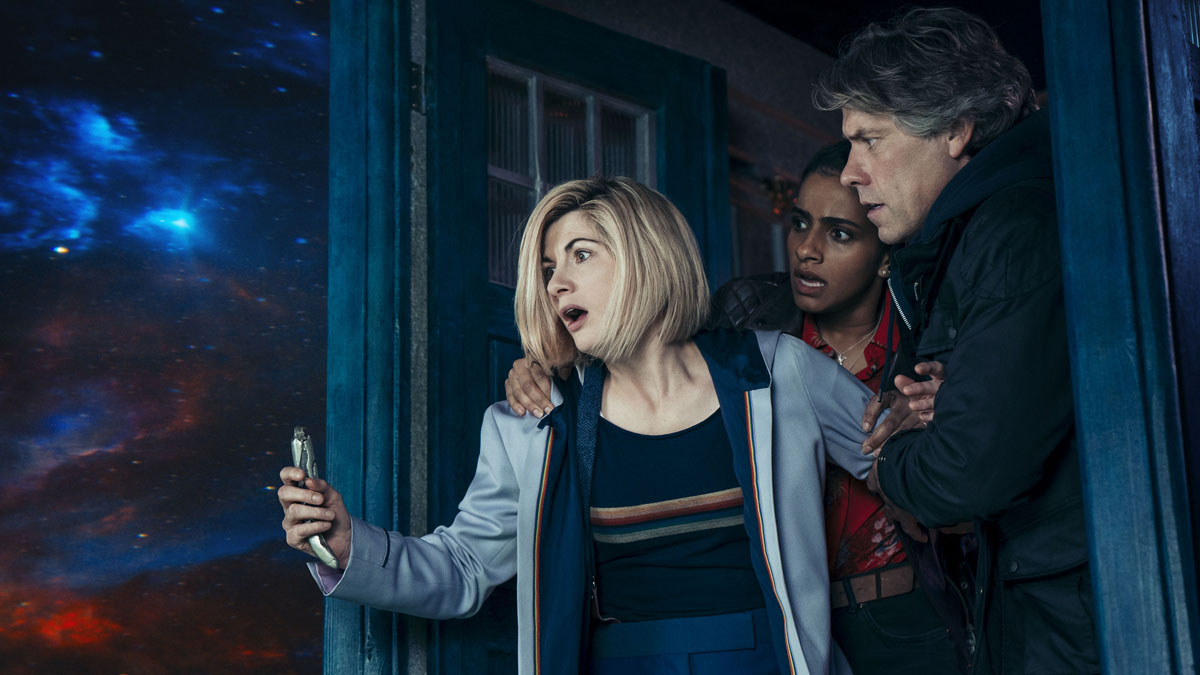 From the outset, Doctor Who: Flux has an uphill climb. Quite apart from the significant hurdles of filming anything during a global pandemic, recent announcements concerning the programme’s future – Russell’s coming back! We’re getting a new Doctor! – have firmly distracted everyone from what’s happening to the show in the present.

It must be terribly frustrating for everyone involved in the creation of these episodes, no matter what their role was in proceedings, to see something they’ve worked hard on treated like yesterday’s news before the series has even aired. No matter what the future may hold, this group of people are the ones shepherding Doctor Who for the next two years, and that’s plenty of time left for them to surprise us. So, putting wild speculation of the Fourteenth Doctor and future anniversary specials aside, the meal we have in front of us is a “six-chapter” story centred around the titular Flux but still hopping around time and space.

First, we get a very quirky cold open. The Doctor and Yaz, who’ve clearly been travelling as a twosome for some time, are being hung upside-down by a flying stick above a lake of acid on a planet that’s four minutes away from destruction. Oh, and they’re also being menaced by hovering drones unironically named “Kill-Discs”. It’s almost self-parody; a James Bond action sequence plucked straight from the Roger Moore era, but it does play out sincerely and isn’t what you’d expect to kick off a self-proclaimed Halloween episode. It may well serve to lay out Flux’s manifesto – don’t ask questions, just hit the ground running and accelerate from there.

Having survived the machinations of the canine Karvanista, it would be on-form for the Doctor to brush herself off and immediately get caught up by the real plot of the episode. Not this time, though. Despite his predilection for traps that would make a Batman villain blush, Karvanista’s not just a pre-titles joke – he’s a major player in the episode. Travelling to what he describes as “the final hours of planet Earth”, the TARDIS is forced to set off in hot pursuit, except that the ship seems to be struggling, not to mention leaking, for some reason the Doctor can’t pin down.

Chris Chibnall once again pens the first episode of the new series – he’s scripted or co-scripted all six parts this time around – and there are certain similarities to the first part of ‘Spyfall’ here. Big chunky subtitles carry us across lots of seemingly-unconnected locations as the story unfolds, while characters are introduced with just a few lines of dialogue before we’re whisked away to watch the next puzzle piece being fished out of the jigsaw box.

This is also a “new companion” episode, of course, so we do get to spend a bit more time enjoying the debut of Dan Lewis. He’s played by John Bishop, who imbues Dan with a kind of fragile cheerfulness that’s hiding the woes of a directionless and rather melancholic man – and it’s clear he’s fooling no-one. Dan is obviously fiercely proud of Liverpool, but the life he spends there seems to be as threadbare as his kitchen cupboards. It’s a similar sense of listlessness to Donna Noble before she reconnected with the Tenth Doctor in ‘Partners in Crime’, so let’s hope that Dan actually gets to remember his time in the TARDIS when all is said and done.

Speaking of forgotten things… While she’s wrestling with the TARDIS, the Doctor finds her mind yoinked halfway across the universe. She’s to bear witness to the escape of a mysterious alien as he breaks out of eternal confinement and dusts a couple of guards to revitalise himself. (Scripts during Chibnall’s tenure have a bad habit of leaving significant characters unnamed, but this is ‘Swarm’, at least according to the credits.) “Trick or treat!” Swarm declares upon his escape, keen to goad the Doctor and apparently equally keen to remind the viewers at home what day it is as if they weren’t already suffering from Haribo Remorse.

It’s made obvious that the two have past history which the Doctor doesn’t remember, and implied that she was once at least partly responsible for Swarm’s incarceration. Yes, for better or worse, we’re leaning back into the legacy of the Timeless Child and the Doctor’s past actions as part of The Division on Gallifrey – in fact, we’ll come to learn that her pursuit of Karvanista is the Doctor seeking answers about her wiped lives.

Karvanista himself arrives on Earth while the Doctor is telepathically-texting “new regeneration, who dis?” and breaks into Dan’s house, seemingly looking to pull off an old-fashioned alien abduction. Dan, though, gamely tugs at the alien’s dog-like whiskers and comments on what a nice Halloween costume it is, which is precisely the kind of attitude to take towards anyone who breaks into your house with an axe. This should be a cringe-inducing scene, but it works, largely because Karvanista isn’t just a Scooby-Doo villain. He’s an exasperated professional with a short temper and a job to do, and it sets him nicely apart from the scenery-chewing Swarm and his grand proclamations of universal destruction.

Having finally coaxed the TARDIS to Earth, the Doctor and Yaz find Dan’s house and realise that he’s been taken. They’re then accosted by a woman named Claire who’s clearly involved in something timey-wimey, but the Doctor’s so focused on the chase she practically drags Yaz back into the TARDIS and off to Karvanista’s ship, which is looking to rendezvous with seven billion of his buddies in what bears all the hallmarks of a classic alien invasion.

The TARDIS really isn’t well at this point, with the interior geometry beginning to distort. Even so, the Doctor and Yaz manage to make it to their destination and split up, with Yaz busting a confused Dan out of the cage he’s been stuffed inside. Yaz was so often given nothing to do when Ryan and Graham were around, so it’s great to see Mandip Gill finally getting to take charge of a scene, showing the confidence and command that we were hoping from PC Khan since we first met her. Right away, there’s a chemistry with Yaz and Dan that simply wasn’t present between the old members of Team TARDIS.

Confronted by the Doctor, the infuriated Karvanista reveals that his species, the Lupari, aren’t here to invade humanity but to save them from a cataclysmic event – namely, the Flux. It’s a fun twist because Karvanista clearly doesn’t want to be involved in all this and would just as soon hurl Dan out of an airlock, but it does raise the question of who organised this “species-bonding arrangement” to begin with. (Could it be the Doctor herself? Possibly, but let’s hope the truth is more interesting.)

Meanwhile, we get our first look at the Flux through the eyes of Vinder, the lone occupant of an observation base who has to report the billowing cloud as it sweeps across the cosmos, atomising anything and everything it touches. Vinder is set to be a regular character but Jacob Anderson is given relatively little screen-time here, so the jury’s still out on what he’ll bring to the table.

The effect of the Flux is so similar to the attacks unleashed by Swarm, it’s no surprise when he psychically contacts the Doctor a second time, lamenting her wiped memory and promising that this will be their final fight. He then directs the Flux to pursue the TARDIS directly, leaving no doubt that this is a weapon rather than a natural phenomenon.

The Doctor’s goal in the last few minutes of the episode is to assist the Lupari in saving humanity, and she does so by ordering their ships – apparently somehow designed to withstand the Flux – to interlock and surround the Earth with a protective shell. It’s played as a triumphant moment, as if Earth is the only planet worth caring about, and the Doctor shows an odd lack of concern towards the countless other lives the Flux must be snuffing out. Granted, there’s not a lot of time for grief, but the story plays down the unimaginable horror of what’s happening to the universe by focusing almost exclusively on the Doctor and her favourite planet.

We’re left on a cliffhanger as the terminally warped TARDIS throws its doors open and exposes the control room to the oncoming Flux, but there are plenty of newcomers in peril of their own whose predicaments have yet to be explained. We’re still to learn the truth about Claire and her knowing altercation with a Weeping Angel, the purpose of mysterious tunnels being dug under 19th century Liverpool, what importance Dan’s date Diane holds to Swarm and his sister Azure, not to mention what exactly the Sontarans are planning…

In short, it’s a lot. Doctor Who two-parters often fall into a routine of having Part One be nothing but questions asked as characters move into position, but that’s not always a bad thing – Capaldi-era adventure ‘Under the Lake’ was a fine mystery that saved all its answers for the following week’s ‘Before the Flood’ and that was a speedy, suspenseful ‘base under siege’ story even so.

This is a six-part story, however, and it needs to be judged as such. The viewer shouldn’t have to rely on episode six retroactively making or breaking the first five chapters, and each instalment is going to need to stand on its own merits when it comes to keeping us entertained.

Does ‘The Halloween Apocalypse’ hold up on its own? More or less. Scenes with our core characters interacting make for the most enjoyable moments, and the script is a breath of fresh air for Yaz in particular. She’s embraced the role of the experienced companion who isn’t afraid to argue with the Doctor or call her out when she keeps things to herself, taking the initiative in moments where Thirteen’s hesitancy and self-doubt manifests itself. This is the Yaz we were hoping for all along, in other words, and I hope she sticks around.

Scenes with the side characters are less engaging, though. It’s obvious from the minute Claire appears that she’s going to be menaced by a Weeping Angel, but the keyhole scene goes on just a little too long and is just a little too similar to scenes from the iconic Blink. Likewise, it’s hard to really empathise with “Man Who Stores Chillies in Fridge” getting bumped off by Swarm when that’s his only defining character trait.

It’s impossible to say how these disparate threads will ultimately contribute, of course, but saving a few of these vignettes for future episodes would have allowed this script to spend more time fleshing out the Lupari and the nature of their species-bond, because that is ultimately the core story of ;The Halloween Apocalypse; – everything else is groundwork. Still, the big win here is the promise of a revitalised TARDIS crew who are more keenly aware of, and able to make up for, the Doctor’s foibles. It may be too little and too late for fans who are already fixated on the future, but this new team dynamic is a change for the better nonetheless.

Doctor Who: Flux continues next Sunday with ‘War of the Sontarans’

Junji Ito Maniac: Ranking the Stories From Creepy to Downright Terrifying
Dead Space Remake: Where to Find Every Schematic
HBO’s The Last of Us: The Changes to Bill’s Story and the “Parallel Universe” of TV
New Batman and Robin Movie, Green Lantern TV Show, and More Announced for Revamped DCU
The Sandman | Comic to Screen: Hob Gadling | #Shorts