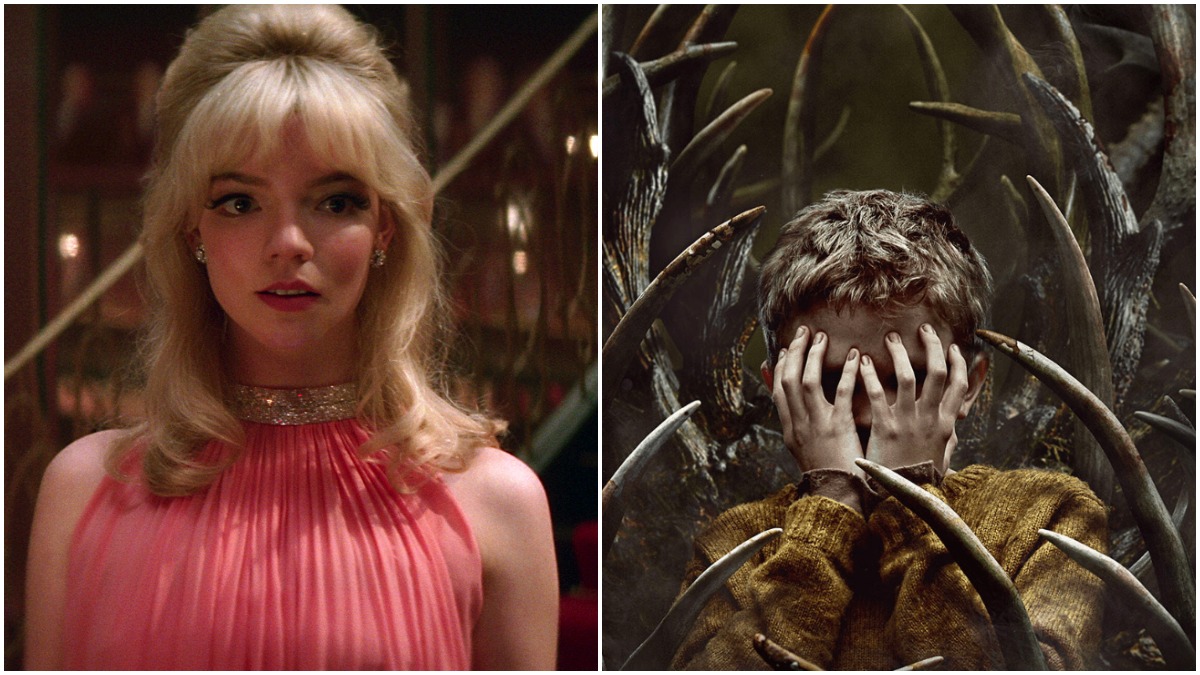 The beginning of autumn is supposed to be spooky season, particularly in the U.S. where Halloween is treated with more reverence than most national holidays. It’s that time of year where children go trick ‘r treating and adults also dress up as ghosts and goblins—seeking out out new chillers and thrillers of every stripe. Even so, that setting was no help to Last Night in Soho and Antlers, two new horror movies that sank like bewitched stones at the box office.

Grossing a near identical cume of $4.16 million over the weekend—with Edgar Wright’s Last Night in Soho squeaking out the higher estimated final tally—both films opened below $5 million in their first three days of theatrical release in the U.S., and both failed to crawl into even the top five earners of the weekend. While Soho and Antlers dueled it out for sixth place, the top five movies included an obvious No. 1 film with Dune in its second weekend, as well as other franchise films also in their third, fourth, and even fifth weekends like Halloween Kills, No Time to Die, and Venom: Let There Be Carnage. Even niche speciality screenings of the anime film My Hero Academia: World Heroes’ Mission opened in fourth place with $6.4 million despite playing on almost half as many screens as Last Night in Soho.

The Halloween Kills comparison is the most intriguing. Like Antlers and Soho, David Gordon Green’s sequel to his 2018 reboot of the Halloween saga is a horror movie. Unlike those films, it is an extension of a 40-plus year old franchise that drew in a larger holiday audience despite Halloween Kills also being readily available at home in the U.S. on the streaming service Peacock (and therefore globally via pirating). Nonetheless, it still could earn more than double the new releases of Soho and Antlers, with Michael Myers adding another $8.5 million to his box office body count.

There are of course a variety of reasons this occurred. Both Last Night in Soho and Antlers were different animals, targeting slightly different audiences. With its dreamy marketing strategy, which emphasized the mystery of its narrative as much as its decadent, giallo-inspired color scheme, Last Night in Soho attempted to intrigue and mystify audiences increasingly conditioned to expect a certain type of familiar story from their trip to the multiplex. Was Wright making a slightly insidious time travel movie comparable to Midnight in Paris or a ghoulish horror film with buckets of blood?

By design, we weren’t really sure, but most social media film enthusiasts—generally dubbed “Film Twitter” in the online parlance—were set abuzz by that mystique. Just as they were by the fact that the film also targeted younger audiences with a strong focus on Anya Taylor-Joy, fresh off the global Netflix phenomenon, The Queen’s Gambit, and her ethereal singing voice. (Last week’s YouTube release of Taylor-Joy’s “Downtown” cover has already drawn more than 2.2 million views.)

Antlers stayed squarely focused on the older horror demographic with its marketing strategy. While director and co-writer Scott Cooper is primarily known for gritty dramas like Hostiles, Crazy Heart, and Out of the Furnace, the trailers just as much emphasized producer Guillermo del Toro’s involvement: a name beloved for his creature features like The Devil’s Backbone, Pan’s Labyrinth, or the Oscar-crossover film, The Shape of Water. Granted,  Antlers was wisely not marketed as a crossover; it was just supposed to be an immaculately made and acted monster movie were we’d see the mythological Wendigo given a sizable Hollywood budget as it tore through human flesh.

Neither film was intended for the exact same demo, and yet both were reliant on the prospect of older audiences that tend to seek out original films in the “speciality” market—which is the increasingly rare type of Hollywood distributed release with a moderately small or “middle” budget. As has become painfully predictable this fall, those older audiences mostly didn’t show up, and those who did skewed along familiar lines: more than 63 percent of Last Night in Soho’s audience was over the age of 25 while 65 percent of Antlers’ audience was over the age of 25. That break-up along the aged-25-paradigm isn’t necessarily dispiriting; it’s just how few folks in any demo actually paid for a ticket.

Admittedly, there are always extenuating circumstances. For instance, neither new release has an enthusiastic CinemaScore, with Soho being given a  “B+” grade by the most popular industry pollsters, and Antlers earning a much more dismal C+. (For context, Hollywood studios consider anything below an “A-” to be negative since it suggests poor word of mouth.) But then horror movies often generate divisive CinemaScores, including some that  are still hits in the speciality market, such as Ari Aster’s Hereditary, which opened at $13.6 million and in fourth place in a highly competitive summer in 2018, all with a “D+” CinemaScore. Now it’s generally considered as a modern horror classic. And for what it’s worth, Last Night in Soho at least has a strong audience score via RottenTomatoes’ unscientific polling, which pegs it at 92 percent “Fresh.”

What seems a larger culprit is the familiar refrain of movies targeting older demographics continuing to fall flat. It’s jarring to witness as younger-skewing franchise films slowly inch back toward pre-pandemic numbers, including in the amount of adults in their late 20s and 30s who’d rather see Michael Myers kill again than something new and better reviewed in the same genre. Other speciality films, such as Searchlight’s Oscar contender The Eyes of Tammy Faye, also failed to find a significant audience last month. Most notably though is the would-be epic from Ridley Scott earlier this month: the lavish, mostly well-reviewed, and movie star-encrusted The Last Duel, which flopped spectacularly when it also failed to earn $5 million its opening weekend.

The failure of The Last Duel is clearer given the movie’s reported $100 million price tag. The reasons for its bombing are also more self-evident in the wake of questionable marketing and it being situated one week after No Time to Die and one week before Dune, franchise films that also come with built-in older audiences. Nevertheless, it is the most visible harbinger of an emerging trend this fall.

Blockbuster cinema is rebounding over these last several months, if somewhat fitfully, as indicated by the overperformance of Shang-Chi, Venom: Let There Be Carnage, and Halloween Kills. Even when the James Bond movie opened below expectations, it still became only the sixth film to cross $100 million at the U.S. box office since January 2020. But while younger audiences are showing up for franchises, they remain ambivalent toward original movies not based on a property or brand they’re already familiar with—even if social media users are gaga over Taylor-Joy’s cover of “Downtown.”

Conversely, older audiences remain skeptical about going to the theater altogether, likely due in large part to an anxiety among many Americans about the ongoing COVID-19 pandemic and the uptick of COVID-related deaths with the emergence of the Delta variant—a tragic phenomenon heightened by the large percentage of unvaccinated Americans.

All of which puts the movie industry in a precarious place. If franchised entertainment is slowly fighting its way back toward normalcy, can “speciality” films or anything not based on intellectual property do the same anytime soon? Or will such cinema have to wait until the pandemic is more fully behind us? If that’s the case, it becomes increasingly unlikely the current industry models—which will begrudgingly allow respected auteurs like Wright and Cooper to occasionally make moderately budgeted horror movies—will endure.

Dead Space Remake Release Time: When Will the Game be Playable?
Forspoken Is That Frustrating Piece of Entertainment That Gets Good “Eventually”
How to Find a PS5 and Xbox Series X In 2023
New Batman and Robin Movie, Green Lantern TV Show, and More Announced for Revamped DCU
Should Marvel Change MCU Strategy on Disney+?