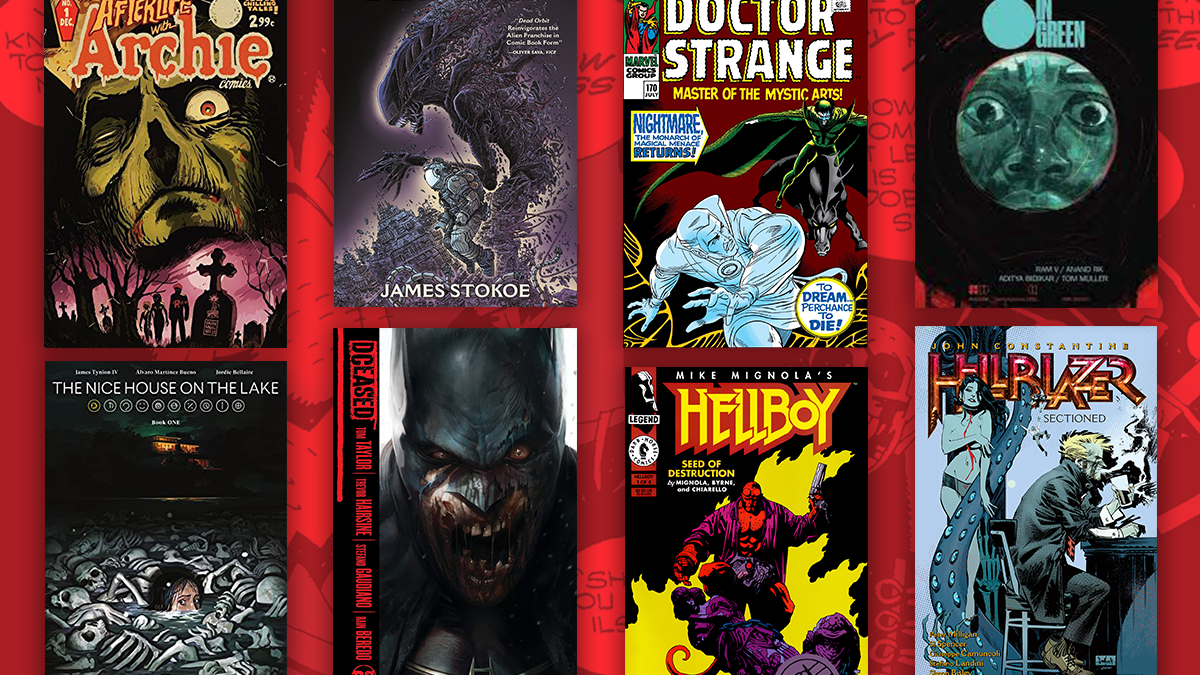 This article is part of our Collector’s Digest series powered by:

Halloween may be over, but Spooky Season never really ends here at Den of Geek. Thus, there’s no better time than the present to take a look at the most terrifying characters in comics. It’s tough to pull off jump scares on the page, but comics are perfect for over-the-top monsters, skin-crawling psychological horror, and the kind of existential terror that can only be inspired by a large stone man in a purple skirt. Let’s take a look!

There have been plenty of fictional depictions of Rasputin through the years, but none quite like the unkillable Nazi occultist who kicks off the story in Mike Mignola’s all-time great comic, Hellboy. The Rasputin we see here is a more purely evil one than in most other stories, allied with the Ogdru Jahad – Chthonic monsters from beyond space and time trying to escape their prison and bring about the end times. He’s also the one who summons Hellboy to Earth.

The cool thing about Hellboy and Rasputin is if you read these stories, eventually you will get to see every monster from almost every mythology, from chupacabras to Koschei the Deathless. Rasputin himself has sent vampires, dragons, Nazis who never take off their gas masks, Baba Yaga, demons, and Elder Gods against the big guy. Hellboy is also structured so that there are very few bad places to start. But if you really want the whole experience, you should start at the beginning, with Hellboy: Seed of Destruction. The first issue will run you around $40, but you can grab Hellboy easily in collected editions for half that price or less.

Created by Stan Lee and Steve Ditko, Nightmare is rumored to be one of the villains of Doctor Strange in the Multiverse of Madness. He’s also terrifying: he’s lord of the Dream Dimension, where he feeds off of the terror of sleeping humans. He’s basically Marvel’s Freddy Krueger.

Nightmare has battled heroes from all over the Marvel Universe, from Hercules to the Hulk to Thor to, most recently, the X-Men. But don’t kid yourself: he belongs to Doctor Strange, in the weird world of Marvel magic, and that’s where you’ll find his creepiest stories. His first appearance is in Lee and Ditko’s Strange Tales #110, and it is probably already at its peak, often going for over $10,000. If you’re looking for a more budget alternative, Doctor Strange #170 is a much more expansive story pitting the magician and the dream lord, and it’s. going for about $70 now. If it turns out he’s the big bad of the next Doctor Strange movie, expect that to shoot up quickly.

While we’re on the subject of evil dreams, picture having your eyeballs popped out of their sockets and snacked on by a smartly dressed man. And he’s feeding your eyeballs to the jagged, toothy mouths in his own eye sockets. That deeply unpleasant image is exactly what The Sandman’s Dream wanted in your head when he created The Corinthian, his greatest nightmare, who eventually went rogue on Earth and had to be stopped. Gaiman’s Sandman is one of the greatest comic series of all time, but it’s rarely straight horror. The Corinthian is one of the exceptions.

It’s hard to predict who’s going to be the breakout hit from the rush to other media with The Sandman – the cast of the Netflix show is packed with stars and stars-to-be. Boyd Holbrook, playing The Corinthian, has just as good a shot as the rest. Copies of The Sandman #10 can be had for as low as $50 now, but expect that to rise when the show lands.

Jack Kirby’s dark god to end all dark gods, the lord of Apokalips, has been a lot of things to the DC Universe since his creation. He’s tried to conquer the DCU almost constantly since his creation, with varying results – one time Superman sang him to death. Another time Mister Miracle stabbed him in the eye with a veggie tray.

And then there was the time he accidentally turned the entire Earth into zombies. DCeased sounded like a joke when it was announced, but the series was wonderful. It was full of heart and had great moments for so many DC heroes, but an underrated part of its excellence was how utterly terrifying the first issue was. You can get copies of that first issue with the regular cover or a variant, for between $10 and $20. You can also find copies of early Darkseid appearances, with killer Kirby art, for surprisingly cheap: his first cameo, in Superman’s Pal Jimmy Olsen #134, for under $500, and his first full appearance in Forever People #1 for less than $200. Prices are probably close to bottoming out now that his appearance in Justice League is in the past, but it’s only a matter of time before he gets put in a new JL movie. Grab these now.

Comics don’t do jump scares anywhere near as well as other mediums, but they do slow burn, oppressive tension and moody terror perfectly, and the Xenomorph from the Alien movies is the right monster for that vibe.

There have been a lot of Alien comics over the years, and while Marvel’s most recent entry is extremely solid, the best of the most recent batch has to be Aliens: Dead Orbit, James Stokoe’s dense, intricate story. He sets the xenomorph loose on a space station and scares the hell out of you as he rips the crew to pieces, physically and emotionally. Full runs will cost you upwards of $50, but single issues are almost cover price.

It’s still early in its run, but James Tynion IV and Alvaro Martinez Bueno’s The Nice House on the Lake is one of the scariest apocalypses ever put on the page.

The first issue opens with a group of friends and acquaintances arriving at a lake house in Wisconsin for a weekend getaway organized by one friend. They discover more about their relationship while there, as the world literally burns around them. Later issues introduce some mystery about whether or not the apocalypse actually happened or can be averted, but the first issue shows it in fairly great detail, and it’s incredible. It’s also pretty cheap – first printings with the original cover are going for about $10. Expect that to jump as we get closer to the inevitable movie.

Buy The Nice House on the Lake #1 here.

John Constantine, Hellblazer, the long-running Vertigo series about John Constantine’s adventures through the occult, had a lot of memorable monsters, demons, and supernatural threats. But none of them were quite as scary as a regular old run-of-the-mill serial killer.

The Family Man and John crossed paths when John found a collectibles dealer selling memorabilia from his crimes, and that led John to try and stop him from killing any more parents and children in their homes. What followed was the least supernatural story Constantine was ever in, but it was so scary that I may or may not have checked on my sleeping kids while reading it.

The issue that introduced The Family Man, John Constantine, Hellblazer #24, is barely over cover price. It’s probably never going to be a key issue, so don’t buy this to invest in it. Buy it because it’s a damn good story.

That’s right, one of the most terrifying monsters in comics history is Jughead Jones’ dog.

Afterlife With Archie, the horror comic that sounded like a joke when it came out, was utterly terrifying. It showed Riverdale falling to a zombie outbreak and followed Archie, Betty, Veronica and the other lucky few who survived as they tried to make it out of the overrun town. And then it flashed back to the beginning of the outbreak, where we saw Hot Dog get hit by a car (driven by Reggie Mantle). Jughead took his beloved pet to Sabrina Spellman and begged her to bring him back, and you know the old saying by now. “Sometimes dead’s better.”

Afterlife With Archie isn’t especially expensive now, with copies of variant covers going for only about $10, but with Sabrina announced as joining the cast of Riverdale next season, there’s a reasonable chance this series might see a bump.

YOUR OWN INSECURITY AND ALSO A JAZZ DEMON

Blue in Green is one of the best horror comics ever published, and it’s mostly about the terror and regrets of wasted potential. The book follows Erik through the traditional crossroads tale, where he cuts a deal with a demon, becomes a breakthrough talent, and then has to pay the bill. But two things really make it stand out: the way it uses nostalgia and memory to heighten the terror Erik feels, and the art from Anand RK. The art is disorienting, dark, moody and very scary.

Blue in Green is an incredible graphic novel, but it doesn’t have any buzz in other media yet, so copies of the book are dirt cheap – $10-15, basically cover price. Grab them now.

The Fantastic Four’s second greatest villain (alternate versions of Reed Richards) is directly responsible for the zombie outbreak in the series that was turned into the best What If…? episode. And the panel where it happens is one of the most disturbing things ever put in comics.

Following the runaway success of the original Marvel Zombies series, Marvel put Robert Kirkman (yes, that Robert Kirkman) and Sean Phillips (yes, the Sean Phillips who draws Criminal) on a one-shot origin story, Marvel Zombies: Dead Days. The virus makes its way to Earth from space, and while the heroes are losing, there is still hope, even after so many of them were lost. Until Mister Fantastic decides to make a brutal heel turn. What happens next must be read and absorbed slowly, because it is awful. It’s also one of the most effective zombie comics ever.

Somehow this book is flying below peoples’ radar, despite the Kirkman and What If…? associations. It’s as cheap as $5 on auction. You should grab it now.