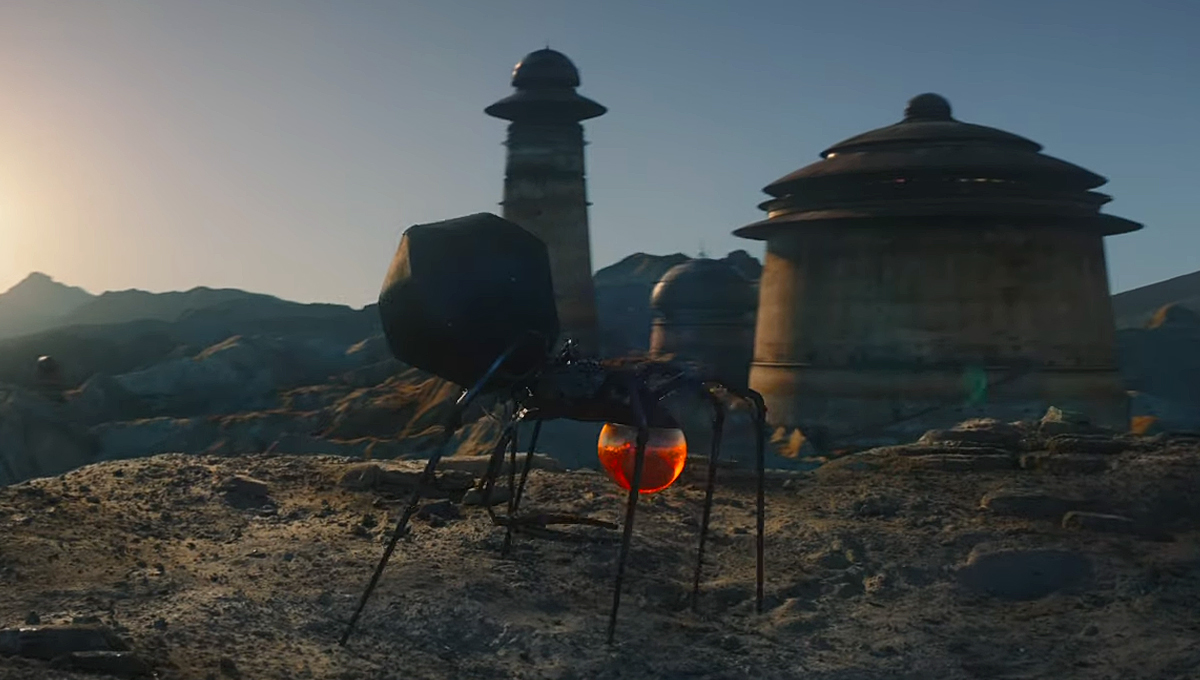 The Book of Boba Fett trailer touts the belated fulfillment of a TV series concept focused on the seedier, “scum and villainy” side of the galaxy as once teased in Lucasfilm’s nixed pre-Disney TV project, Star Wars: Underworld. Yet, its focus on classic concepts was made clear with the clip’s opening shot, featuring one of Return of the Jedi’s most curious creatures, a B’omarr monk. While the order’s morbid, jar-brained backstory is interesting in its own right, the monk’s presence could prove indicative of Boba’s criminal syndicate power consolidation.

Casual Star Wars fans were likely left inquisitive upon The Book of Boba Fett trailer’s immediate sight of a serene Tatooine desert landscape being interrupted by the approach of a horrific spider creature moving with a frighteningly frenetic gait evocative of a classic stop-motion animation creation from Ray Harryhausen. Yet, as the odd arachnid moves closer to the forefront, and the crimson-liquid-filled globe it carries underneath becomes distinguishable, the creature is likely to ring a few bells from viewers who recognize it as one of the myriad monsters seen in Jabba the Hutt’s palace in 1983’s Return of the Jedi. And sure enough, that turns out to be the destination to which the creature is creepily crawling. However, its arrival might tell a story in its own right.

Check out The Book of Boba Fett trailer just below.

The onscreen canonical prominence of B’omarr monks was mostly resigned to a long shot in Jedi in which C-3PO and R2-D2 are first let into Jabba’s Palace and proceed to move toward the interior-set camera, after which you can see the spider droid ominously cross in front of the still-open gate against a sun-lit background as the thick portcullis slowly lowers. Indeed, the mere sight of the creature freaked out the reliably-jittery 3PO, who made an immediate effort to quickly distance himself from the creepy crawler. Yet, while viewers would likely dismiss the creature as some kind of alien arachnid, the B’omarr monk is anything but a garden variety sci-fi creation, and carries a direct connection to the very structure of Jabba’s Palace itself.

B’omarr monks are indeed monks in the traditional sense of the word, except of a most extreme variety. They started life as standard bipedal humanoid members of the B’omarr order, which, above all else, adheres to a radical transcendental ideology that believes sensations from physical bodies are a distraction from the mind’s innate ability to discern the secrets of the universe. Consequently, members of the order work toward a distraction-shedding enlightenment of sorts achieved by having their brains surgically removed from their bodies, after which they are somehow kept alive when placed into nutrient-filled bowls, allowing them to ponder existence unfettered. However, the monks’ belief in their post-transformation mental abilities is somewhat validated, since their brains’ mental powers are honed enough to communicate instructions to the spider-like BT-16 perimeter droids that carry them around, and can apparently even speak through their installed vocoders.

While members of the B’omarr respectively hailed from systems across the galaxy, the order called Tatooine its home, since the planet, located in the galaxy’s Outer Rim, is safely situated away from most of society, providing a desert atmosphere accommodating for contemplation. Indeed, the structure we know as Jabba’s Palace was originally a B’omarr temple, which would eventually be taken by force by the Hutt gangster and his cronies. However, Jabba seemed to have a whimsical soft spot for the monks, and therefore allowed them to remain at the palace. After all, their horrifying nature clearly appealed to the same sense of the macabre that motivated Jabba to keep a monstrous menagerie (as Fennec Shand put it,) of colossal carnivorous creatures such as the Rancor. Thus, the eccentric sight of a monk skittering about in the background was quite commonplace amongst the death and debauchery in the palace during Jabba’s reign.

Interestingly enough, the B’omarr origin of Jabba’s palace would play a poetic part in Star Wars’ currently-acknowledged non-trilogy canon. We would learn that Tatooine was only one of the planets the ancient monastic order once inhabited. This idea even became integrated with the events of Star Wars: The Clone Wars’ 2008 animated series-launching theatrical feature, in which would-be Sith apprentice Asajj Ventress—working on the orders of her master, Count Dooku—brought Jabba’s abducted infant son, Rotta the Hutt, to the purple-hued jungle planet Teth, specifically to an abandoned palace that bears a familiar architectural motif. That resemblance would prove to be no coincidence, since the setting is specifically identified as having been another B’omarr monastery, one from which the order has long-migrated.

That leads us to the potential meaning of The Book of Boba Fett trailer’s B’omarr monk moment. While we don’t yet know with canonical certainty what occurred amongst the leaderless gang in the immediate aftermath of Jabba’s air-gasping demise, the published 2016 tome, Star Wars Character Encyclopedia: Updated and Expanded, by Pablo Hidalgo, claims that the B’omarr monks reestablished ownership of the palace. Moreover, they even managed to convert one of Jabba’s most visible court members, fearsome Whiphid bounty hunter J’Quille, to their ideology after he survived the sail barge explosion, but was left unable to leave Tatooine when faced with a hefty bounty placed by a rival Whiphid in the aftermath. However, as The Mandalorian Season 2 finale’s post-credits scene reveals, Bib Fortuna, the sleazy, Force-suggestible Twi’lek right-hand man of the late Jabba, eventually wrested control of the palace—presumably from the B’omarr—and created his own little fiefdom, from which he became obese and complacent.

Consequently, if we were to assume that the seemingly less-eccentric Bib did not share Jabba’s affinity for the arachnid brain-bowl-carriers, then it could be the case that he had the B’omarr expelled from the palace, leaving its new master to enjoy his very-sensory pleasures. However, now that Boba Fett has blasted a (literal) hole in Bib’s reign, the Outer Rim’s new criminal regent might have plans that emulate the most effective aspects of Jabba’s methods, minus the brutal vanity. Indeed, Boba’s trailer declaration, “Jabba ruled with fear. I intend to rule with respect,” sounds like the kind of ominously-subtle big-stick politicking that, in the very least, will respect some sacred traditions. Thus, the sight of a B’omarr walking toward the palace could be taken as a sign of a restored status quo, once again allowing the monks residency in their historical home.

Of course, that narrative is just a working theory, and we’ll likely know for certain what it all means when The Book of Boba Fett brings a different kind of Mandalorian story to Disney+ on Wednesday, December 29.