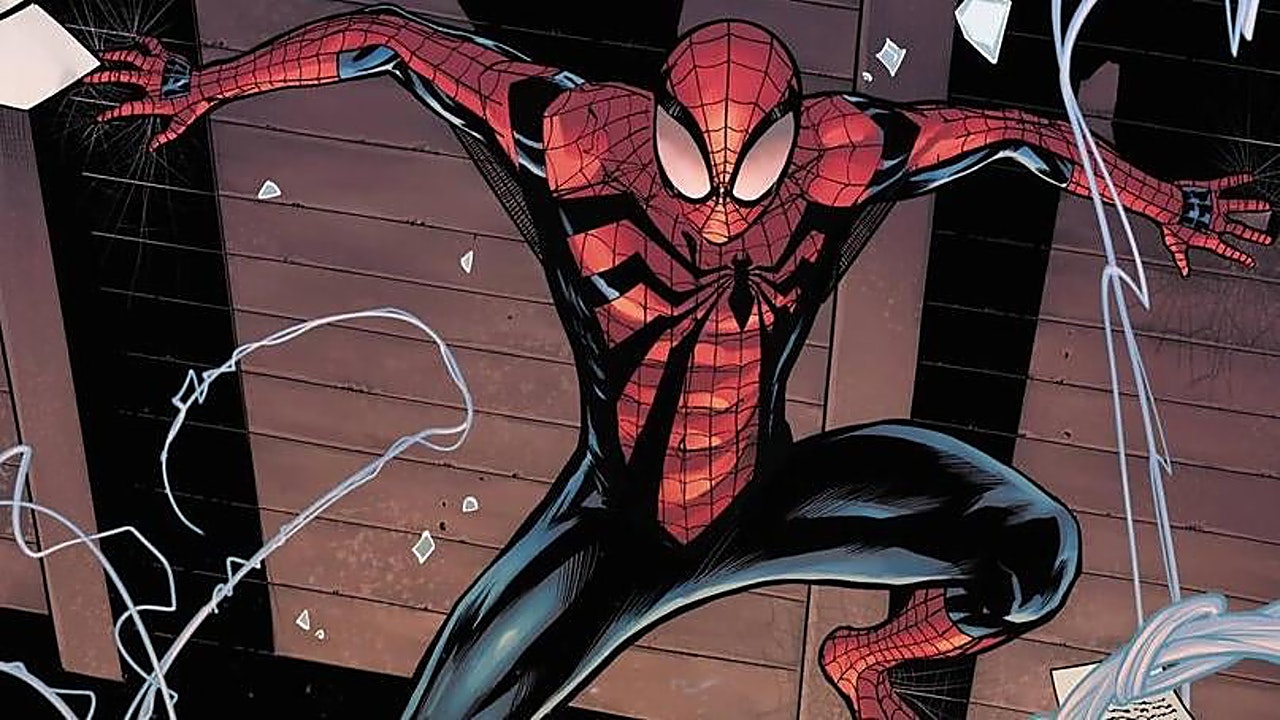 This is not Zeb Wells’ first time in a comic book writers’ room. It’s not even his first time breaking Spider-Man stories as part of a team. The big difference with this one (besides the focus shifting to Ben Reilly, Peter’s returned clone wearing the official red and blue for the first time in decades) is that hopefully no children get eaten on his watch.

“I deserve that,” the new Amazing Spider-Man lead writer chuckles when we compare this new team project to “Shed,” the critically acclaimed, impossibly bleak story he wrote back when Peter Parker was in the middle of his “Brand New Day” era that saw the Lizard return and promptly eat his son.

There’s a lot different this time with the new status quo unrolling in “Beyond,” starting with Spidey himself. The premise of the new run of Amazing Spider-Man has Ben Reilly becoming Spider-Man after the copyright for the character is swiped from under Peter by the Beyond Corporation.

And then there’s the creative team surrounding Wells. This new era of Spider-Man is being crafted by some staggering comics talent and a fresh face: also on the team are Eisner-winners Kelly Thompson and Saladin Ahmed; one of the best Robin artists of all time in Patrick Gleason; and new to comics (but not to Wells) Cody Ziglar. So Wells is less the head of Spidey (a la Jonathan Hickman and the X-Men line) and more a consensus builder who occasionally steers the bus.

Wells appreciates the creative benefits of writing in a collaborative setting.

“Where someone is weak, someone else is strong,” Thompson tells us. “I’ve got a lot of experience writing female characters, [and] being a woman myself, I bring a slightly different perspective.”

Thompson joins the team hot off of an Eisner win (Best New Series for Black Widow). And she probably has the most diverse history at Marvel out of the entire new Spidey crew: an Eisner for a gorgeous spy book; a heisty rom-com in Mr. & Mrs. X; pure superhero punchups in Captain Marvel; the inarguably best all ages comic Marvel has published since Unbeatable Squirrel Girl in the new Infinite comic It’s Jeff. But it’s her work on a character who’s about to be huge that informs her Spider-Man voice.

“I connect [Spidey] mostly to Kate Bishop,” she says. “She obviously doesn’t have his kind of power, but she does have the same kind of never give up dedication. Doesn’t matter how bad things are going in your life, you’re still doing the right thing.”

There is one big surprise slated for Thompson’s stories: her artistic partner there is Sara Pichelli, and those issues mark the first time that women have both written and drawn the same issue of a Spider-Man comic. Ever. It’s very late for that development, but you could do a lot worse than these two powerhouses to start.

“[Sara] is so good across the board. She can do anything,” Thompson says. “What I really love is the more intimate stuff she did, especially with Ben [Reilly] and Janine [Tyne], and a little bit with Peter and MJ too.”

Joining Thompson and Wells is Cody Ziglar. Ziglar is new-ish to comics, with only a handful of Marvel credits under his belt, but you’ve seen his name on high profile projects like Craig of the Creek and Rick and Morty. But he’s certainly not new to these characters. “I was raised on Ultimate Spider-Man,” he says. “That was the one that got me into Spidey…I remember 10 years ago, when I heard that there was going to be a Black Spider-Man, me and my roommate ran to the comic book store and we bought the first three issues of Miles’ Ultimate Spider-Man.”

Ziglar came to comics via Wells. The pair worked together in another writers’ room – for the upcoming Disney+ series, She-Hulk.

“We were very much the comic book nerds, the MCU nerds in the room,” Ziglar tells us. “Whenever they needed to have a super power or a hero, we’d be like ‘This is who we should use!’ And they were like, ‘All right, calm down. We’ll go back to letting the adults talk, you guys sit in the corner and play with your marbles.’”

Ziglar has found the shift between media easier because of his colleagues in the Spidey room.

“I’m used to writing tons of dialogue because Rick or Morty has to yell about Banana Planet for 30 minutes,” Ziglar says. In comics, “…Kelly or Saladin or Zeb or Patrick can convey so much more emotion and so much more story with just two sentences. That’s something that it took me a while to get used to.”

But he’s used to it now, and he’s swinging for the fences. His first stories have him pairing with incredible artists – including perhaps the definitive Spider-Man artist of recent years, Mark Bagley – for stories with some of the biggest names in Spidey’s rogues gallery: namely, Kraven the Hunter and Doctor Octopus. And reviving the classic Spider-Man romance between Otto and Aunt May.

“Doc Ock has a lot of bluster, he’s really full of himself, but he’s also a dork at heart. Being able to find the humor in [Ock and May]and how they interact with Ben was just super fun,” Ziglar says. “What I liked about Kraven is that I got to give some commentary, what my perspective is like on the world, how the US works and how money is not necessarily the best thing.”

Meanwhile, something is not right with Peter, which is what causes Aunt May and Doc Ock to get back together: Ziglar says their story is a noirish gumshoe yarn.

Thompson, for her part, is most excited about expanding the Spider-Man universe. She’s bringing in the Daughters of the Dragon – Misty Knight and Colleen Wing – in backups running through the series for the near future, with all the wit you’d expect from these two characters written by one of comics’ foremost banter scribes. She’s also excited about stuff that you may not immediately notice on first reading. “A lot of the little funny bits we’re doing with Beyond, like their weird inventions and stuff, that’s one of my favorite things,” she tells us. “Little goldfish with legs. Beyond is into some crazy weird stuff, and you get a little bit of a peek at that in the background of this Spidey story. And I think it’s fun stuff.”

For Wells, the center of this new run is going to be trauma. Wells has always excelled at writing damaged characters – Cannonball and Moonstar were in various states of disrepair during his criminally underrated New Mutants run, and Hellions may be the best book of the current X-line precisely because every character in it is profoundly broken. But Ben Reilly lets him spotlight the pathos.

“I see so much pain in [Ben Reilly]. So much potential pain and so much optimism,” Wells says. “As far as he’s concerned, he is Peter Parker. He has all these memories, but he doesn’t get to have that life. He doesn’t get to have that connection. That family he’s had to make, he’s seen it ripped out of his hands a bunch of times. So he’s almost a more inspiring character because he’s still trying to do good, even though life has really, really beat him up…We’re really trying to do right by him.”

Amazing Spider-Man #78, the fourth issue of the Beyond era, hits comic shops and digital storefronts on Wednesday, November 3.

Batman: The Doom That Came to Gotham | Trailer | DC
Marvel Studios’ Doctor Strange in the Multiverse of Madness | Get Tickets Now
Junji Ito Maniac: Ranking the Stories From Creepy to Downright Terrifying
Best Nintendo Switch Settings You Should Be Using
Dead Space Remake: How to Unlock and Survive Impossible Mode