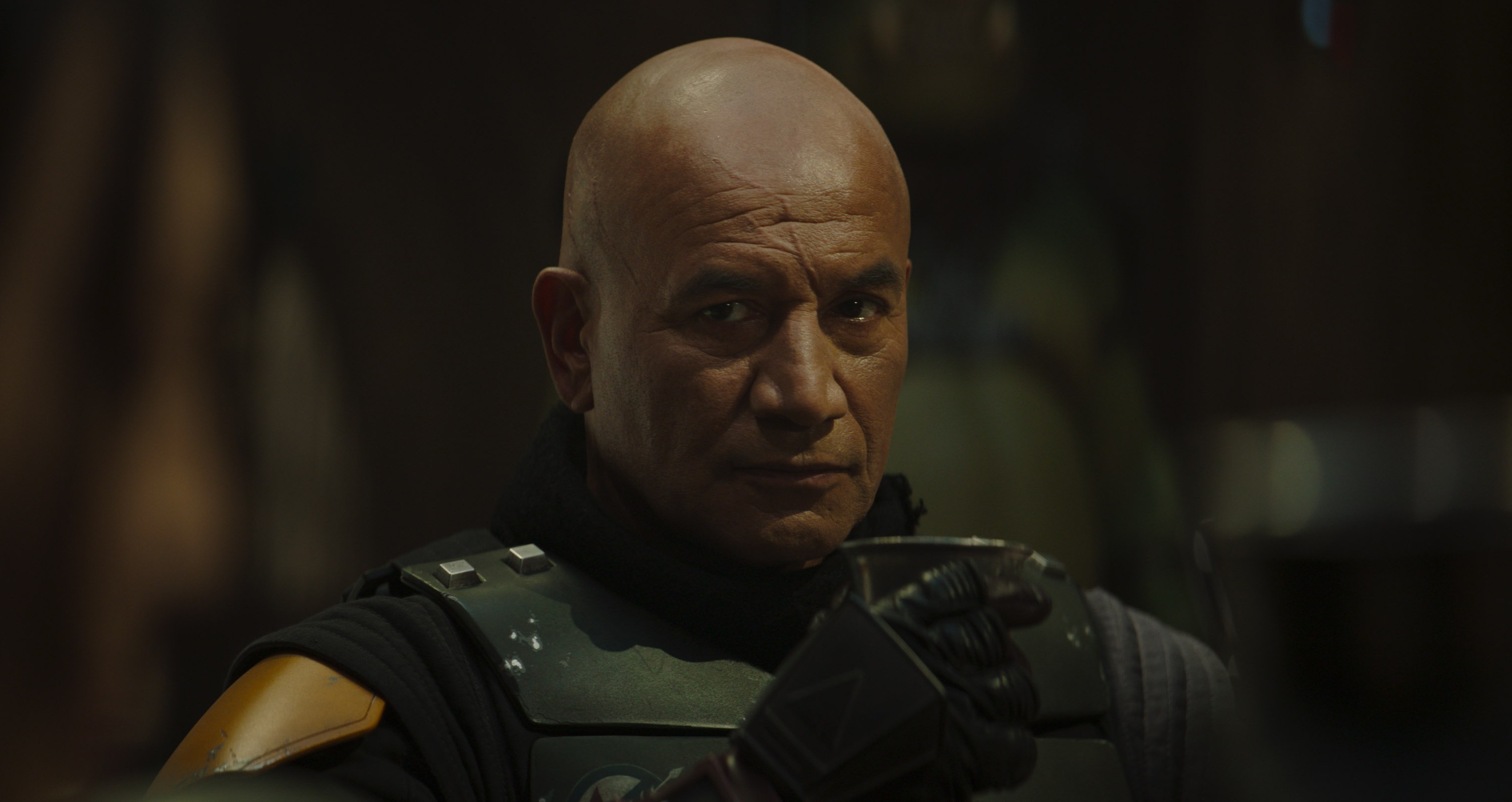 In The Book of Boba Fett, the bounty hunter is taking full advantage of his new lease on life. No longer content to work for greedy crime bosses like Jabba the Hutt, Boba Fett (Temuera Morrison) is starting his own crime syndicate with assassin Fennec Shand (Ming-Na Wen) on Tatooine. But that won’t be so easy as the first trailer for the new Disney+ series shows. He’ll have to deal with rival gangs, dissent from within, and even his own past as a merciless killer. Will Boba really be able to carve out a new path for himself or will he eventually fall back into his old ways?

The trailer doesn’t give us those answers but it does contain plenty of clues as to what’s happening on this show. As such, I’ve picked out a few things that will be pivotal to understanding the criminal underworld of the galaxy far, far away.

Before we get started, watch the trailer if you haven’t already:

Alright, here are the things I noticed while watching the trailer. Feel free to shout out anything I missed in the comments!

If you love Star Wars lore, perhaps the most important aspect of The Book of Boba Fett is how it will further separate Disney canon Boba from Legends Boba. It’s clear from this trailer that Boba’s new goal is to become the next big crime lord, replacing the long-dead Jabba and bringing the Hutt’s captains under his rule. The former bounty hunter (he says he’s no longer one in the trailer) took his first step towards that goal by killing off Bib Fortuna and taking Jabba’s Palace for himself. Next, he’ll need to get the other leaders of Jabba’s crime syndicate on board.

This journey is very different to the one taken by Legends Boba, who wasn’t interested in becoming a crime lord. In fact, after he escaped the sarlacc pit, he went right back to bounty hunting, using reports of his death to his advantage to operate in secret for the most discrete clients. Legends Boba did settle down eventually, but not as a crime lord. He actually ended up becoming the leader of the Mandalorian people! We wrote more about the differences between Book of Boba Fett and Legends Boba here.

Whether it’s during aggressive negotiations inside Jabba’s Palace or fighting henchmen on the Tatooine streets, almost every Boba scene in the trailer features Fennec Shand at his side. While Boba’s name is in the title of this series, it’s pretty clear that Fennec is also getting top billing. What’s unclear is how exactly Fennec fits into Boba’s new criminal organization? Is she Boba’s top enforcer? His consigliere? Are they co-crime bosses?

Whatever the case, Fennec isn’t taking any lip from any challengers to their rule, as she demonstrates during a tense scene between the duo and Jabba’s former captains. Mentioning feeding dissenters to “Jabba’s menagerie” sure shut those Klatoonians up.

If Boba and Fennec ever go offworld in this series, this trailer doesn’t show it. But Tatooine is a big place, with hundreds of miles of hot desert separating cities and smaller settlements from each other, so the duo will need Boba’s infamous ship to get around.

That modified Firespray-31-class patrol and attack craft has been the subject of much debate for the past year due to Disney quietly retiring the ship’s original name, which never really made sense for Boba Fett anyway. We don’t know what the ship’s new name will be, but it’s possible The Book of Boba Fett will tell us.

Jabba’s Palace beats the hell out of wandering the desert. We saw Boba and Fennec clean out the Hutt’s old digs at the end of The Mandalorian season 2. Now it’s their permanent headquarters, and it looks like The Book of Boba Fett will give us a much more detailed tour of this infamous location than Return of the Jedi ever did.

Beyond the main throne room and the dungeons below are a meeting room where Boba meets Jabba’s captains as well as a balcony at the top of the watchtower that overlooks the desert. And who knows what other secrets the palace is hiding.

The trailer actually opens with a very fun deep cut: in the desert just outside the palace walks a B’omarr monk. First appearing in Return of the Jedi, these monks were actually the first occupants of the palace, which was originally used as a monastery. After Jabba’s death, the B’omarr moved back into their monastery before the cowardly Bib Fortuna showed up again to run the criminal operation. Now, with Fortuna dead, it’s possible that Boba has allowed the monks to move back in, a sign that he really means to rule with respect and not fear, as he says in the trailer.

But what exactly are these spider-like monks? Well, they’re actually droids powered by the transplanted brains of the monks. You see, the B’omarr believe that in order to reach enlightenment, they must cut off all physical sensation. By removing their brains from their organic bodies and putting them in droids, the B’omarr remove all senses that would distract their minds from reaching their full potential. I hope The Book of Boba Fett digs into this!

There are many other alien races spotlighted in this trailer, but none get as much attention as this mysterious Ithorian who doesn’t seem to believe Boba Fett has put his life as a bounty hunter behind him. Is he a rebellious crime boss Boba is trying to add to his own crime syndicate? Or someone who is challenging him for the throne?

Whatever the case, things don’t seem to go well, as a fight breaks out in the Ithorian’s lair later in the trailer. Aren’t his men dressed a little like the Naboo royal guard?

A lot of the action seems to be happening in this Tatooine city, but I’m not sure if it’s one we’ve already visited or another place we’ve never been to before. For now, I’m just going to assume it’s either Mos Espa or Mos Eisley, although I don’t remember either being located in a canyon.

The trailer calls special attention to Boba and Fennec entering one specific building I’ve never seen before. Is this supposed to be the exterior of the Ithorian’s lair?

Trouble eventually finds Boba and Fennec during their visit. But it’s no problem for two of the most dangerous scum in the galaxy.

Bringing all of Jabba’s old captains under his command is a pivotal step to building his criminal empire. The trailer teases Boba’s first meeting with the captains, showing just how many high-level criminals were working for the Hutt in his heyday. Jabba’s circle includes Trandoshans and Klatoonians…

…as well as Aqualish.

Unsurprisingly, these crime bosses are skeptical about Boba, one of them even proposing that they should just kill the Mandalorian and take Jabba’s territory for themselves. Good luck with that.

While violence is inevitable, it is interesting that Boba is trying to pursue a different way in these scenes. He could just continue killing his way through Jabba’s ranks and taking all the riches for himself but it sounds like he wants to do things more diplomatically now.

“Why speak of conflict when cooperation can make us all rich?” doesn’t sound like something Return of the Jedi Boba would have said.

The above quote plays over a brief shot of two Twi’lek women talking something over. Is the Twi’lek wearing all of the jewelry another captain? Or perhaps someone else who has risen to power in the aftermath of Jabba’s reign? It would certainly be nice to see Twi’lek women thriving after what happened to one of their own in Return of the Jedi…

No surprise here: where there’s a crime boss, there are usually Gamorreans to protect them. This time, they’re guarding Boba Fett instead of Jabba.

Finally, we see a brief glimpse of Tusken Raiders walking through the desert. It’s implied that Boba spent some time with the Tuskens before running into Din Djarin due to the robes he wears and the gaffi stick he carries before re-acquiring his Mandalorian armor and weaponry. Could we get flashbacks to how Boba survived his fate in Return of the Jedi on this show? More importantly, will Dengar still be the unexpected friend to nurse him back to health like in Legends? We hope so.

While The Mandalorian was originally billed as the Star Wars show that would take us on a deep dive of the galactic underworld, Din Djarin’s adventures with little Grogu quickly evolved into something else entirely, as it brought in Jedi and quests to reclaim Mandalore. Instead, it looks like The Book of Boba Fett will be the show to fulfill that underworld promise.

It’s no secret that Lucasfilm has long wanted to flesh out the seedier side of the galaxy far, far away. In the early days, all we really knew about the criminal underworld in Star Wars was that a lot of it was happening on Tatooine, in wretched hives of scum and villainy like Mos Eisley and Mos Espa, places run by the cruel Jabba the Hutt and his gang.

The old Expanded Universe of books, comics, and video games (now known as the non-canon “Legends” continuity) went much deeper than anything fans had ever seen on screen, but George Lucas planned to change all that with what would have been the first live-action Star Wars series at the time. It was called Star Wars Underworld and brought together some of the biggest names in sci-fi television to develop stories about the criminals and smugglers of the galaxy. Talent included Battlestar Galactica’s Ronald D. Moore and Doctor Who contributors Matthew Graham and Chris Chibnall, among others. Even Russell T. Davies got a call but he turned the project down.

Fifty scripts — two seasons’ worth of stories — were developed in writer’s room-style creative meetings at Skywalker Ranch. Episodes not only included Boba Fett and the story of how Han and Chewie won the Falcon from Lando, but also an origin story for Emperor Palpatine that would’ve blamed his evil Sith shenanigans on a bad break-up. (Lol.)

Ultimately, the show never got off the ground because it was too expensive to make back in 2005. Then, in 2012, Lucas sold Star Wars to Disney, effectively killing Underworld for good. But if you want a taste of what might have been, some proof-of-concept footage for the show allegedly leaked last year:

You probably shouldn’t expect The Book of Boba Fett to look anything like the above, especially since it largely seems to be set on Tatooine, but it does feel like the true successor to Underworld, down to the much grittier tone.

The Book of Boba Fett premieres on Dec. 29 on Disney+. In the meantime, check out the complete schedule of upcoming Star Wars movies and TV series here.

Sci-Fi Short Film: “Kinetic” | DUST
Is This Succession Character Harboring a Painful Secret?
The Last of Us: How Long Does It Take to Beat the Games?
Truth | Marvel Studios’ WandaVision | Disney+
Batman: Beyond the White Knight | Comic Teaser | DC