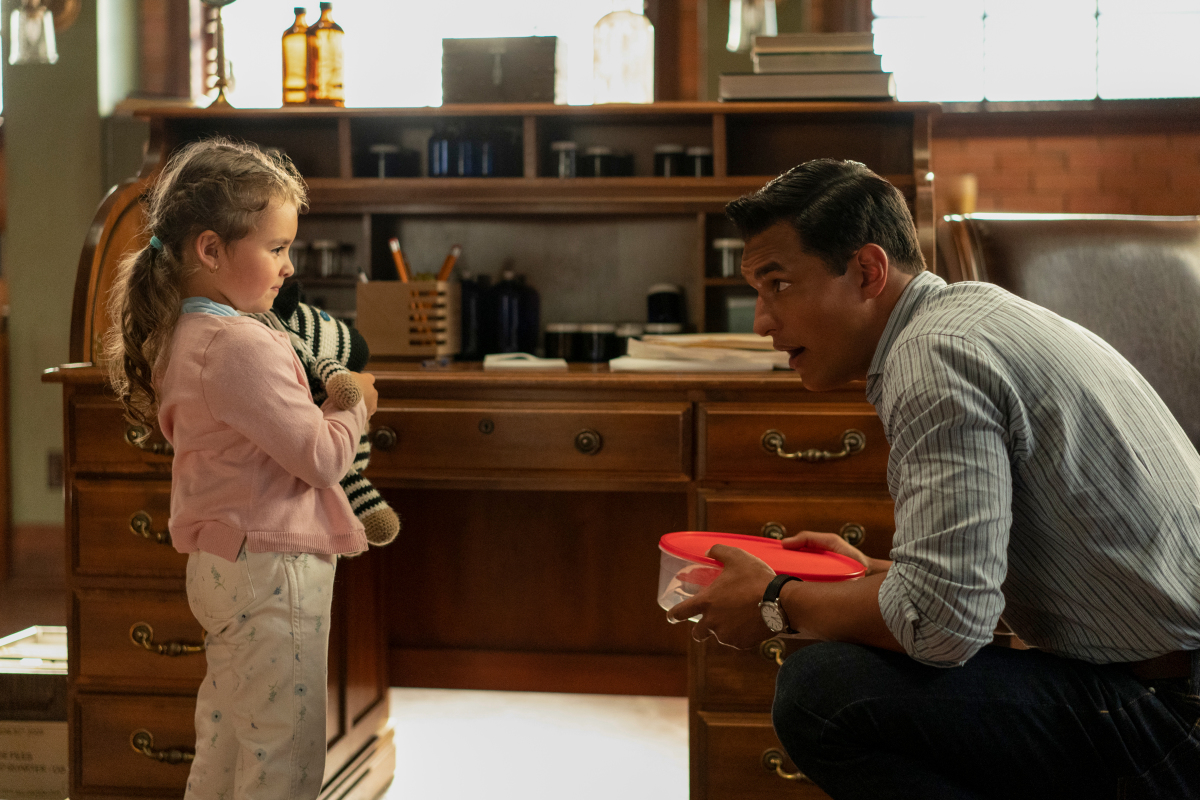 This episode serves as an example of the way that the totem story arc has forced Supergirl to mow through convoluted plot at speeds usually reserved for soap operas. It feels like the show barely pauses to make room for Nyxly and Lex to square off against Supergirl and the Super Friends, in their first real brawl in ages. Meanwhile so much totem-related business cycles through that Lex’s machinations don’t even really register as a reveal, so much as a reminder that these things happened in the first place.

Everyone gets a Lex-o-suit (apparently 31st century tech is the true deus ex mahcina of this season) but that still didn’t help Lexly defeat the Super Friends, at least not on Naxim’s ship. Nyxly had a surprising moment of emotional clarity while in a vault that looks surprisingly reminiscent of the one from the 50th anniversary Doctor Who special. So far her emotional explorations only ever seem to lead her closer to Lex, though she remains a fairly clear-eyed villain who has so far stuck with an understandable concept, even if the execution includes a wanton disregard for human life. The Legion attack in the future that leads to Nyxly somehow dying (note Brainy’s passive phrasing) is something of an enticing mystery, as is Mxy’s whereabouts.

Brainy’s orders to return to the 31st century to merge with the Big Brain to save it from some sort of plague feel very manufactured, but recalling him to the future puts some real stakes into a conflict that was otherwise going far too well for the Super Friends. It’s not hard to imagine a version of this final season that’s less densely overrun with plot points bearing zero emotional investment from the audience that instead gives Brainy having to return to the future more room to breathe. The idea of him leaving has been back-burnered for so long, but he really has made a family in the 21st century and separating him from them – and forcing him to lose his hard-won personality – is a good way to highlight how much he has evolved over time. Brainy is in many ways the heart of the team these days, and losing him is unimaginable.

Bringing back the pure logic AI-version of Brainy was a great move. It preserves the secret of Brainy’s fate for a little while longer, while serving as a stark reminder of just how different our Brainy is from other Coluans or the other versions of himself across time and space, including the version of him that we first met a few seasons ago.

Brainy and Nia made an excellent team getting the Dream totem back and getting everyone to safety, making it even harder to contemplate them separating. It seems unlikely they actually will, but until we know for sure, it’s hard not to be “Debbie with a sad surname” about it. Brainy isn’t holding up well, but as usual, he does better when Nia knows what’s going on.

Kara and Alex disagree sharply about power dampeners and managing Esme’s powers as she tries to figure them out, but of course there’s more at play. It’s not surprising Alex wouldn’t want to put dampeners on Esme after what she went through with the corrupt foster mother, but Kara has a point about Esme’s safety and her own experience as an alien that Alex simply cannot replicate, regardless of any other marginalized identities she may hold. Kara does generally take an assimilationist stance, hiding her alien identity and encouraging going along to get along, but she’s right that safety is still an issue for aliens. Alex trying to claim Kara’s and Esme’s alien experiences by familial proximity sounds like a lot of privileged people who get called out, but specifically echoes the way able parents of disabled children speak over them. Alex should be grateful to speak to aliens she knows and trusts about issues like this and seeking out their advice even if she ultimately doesn’t follow everything they say, not shutting them down.

It’s worth noting Alex was aggressively anti-alien and wanted Kara to hide herself, essentially until the start of the show. Her actions and those of their parents likely played a role in shaping how Kara views her alien identity, as often happens with adoptees. On the whole, it’s an interesting conversation around privilege that has parallels to coming out as a member of the LGBTQ community as well as disability politics, but it feels like the writers left most of that money on the table, opting instead to have Kara realize she’s wrong because she’s not Esme’s parent. Alex gave a token apology for the discord but was still framed as correct, and while she’s probably right about the dampeners, she’s wrong about some other ideas she holds about claiming experiences that aren’t hers, how she treated Kara, and how she responds to being called out.

With his death, the writers finally found a use for William Dey. It’s all very noble and journalistic. He also got to record the ultimate “I told you so” video for Andrea Rojas, so there’s that. If leaking the video had her asking Lena if she’s a callous, narcissistic monster, what will finding out she started the chain of events that led to William’s death do to her? William and Esme recreating Great British Bake-Off was beyond adorable, so it’s sad for that to come to a close so quickly.

Kara is right about seizing joy when you can – hopefully she isn’t too hard on herself about the fact that Lex killed William and kidnapped Esme while she relaxed for a minute. Everyone looked extremely good at the bachelorette party, especially Alex in her plunge jumpsuit, Nia in gold, and Brainy in suspenders with perfectly mussed hair.

Most importantly, with Lex and Nyxly kidnapping Esme for her totemic qualities, we’re finally in the endgame. See you next week (an hour earlier!) for the double-episode series finale.