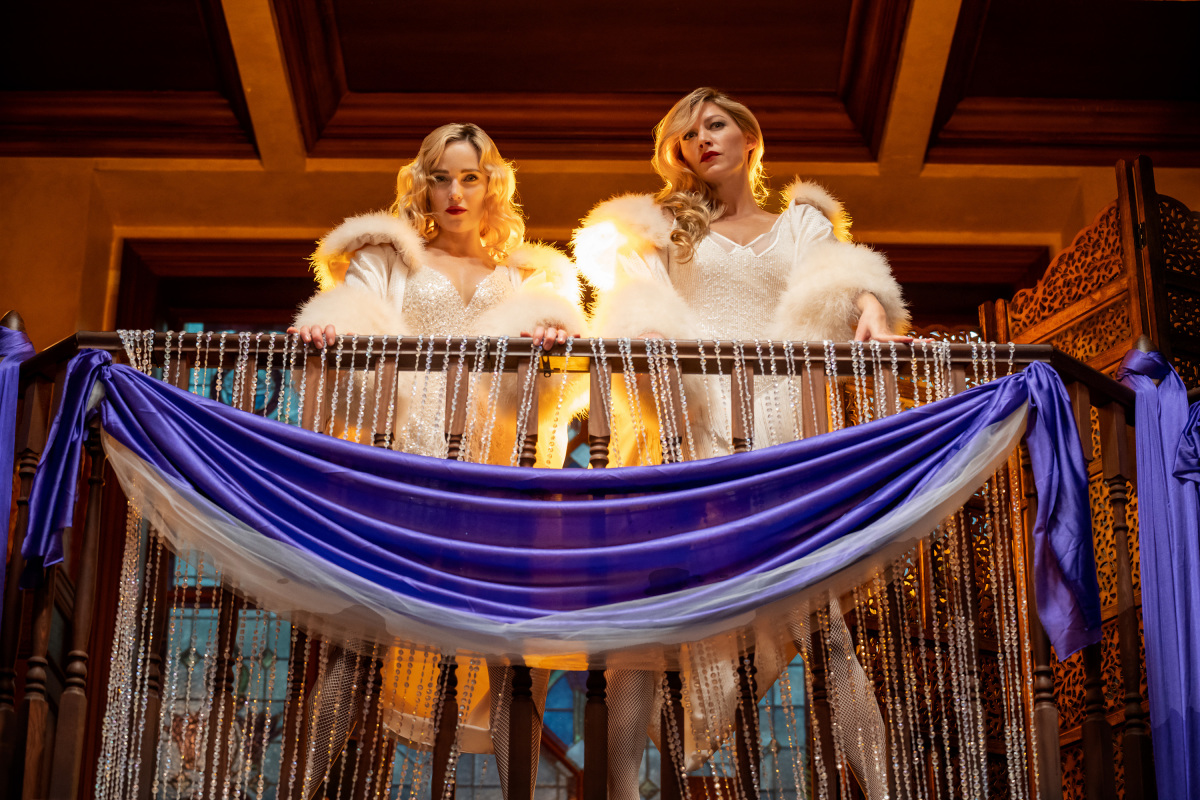 Once a season, Legends of Tomorrow runs an episode where they try and change the past. It’s inevitable on a time travel show: the characters all have histories, and the consequences of changing the past are sufficiently dire to keep dipping back into that well. That’s how you get Zari trying to save her dead brother, or John trying to save his ex boyfriend. It’s always a personal stake because the personal stakes are the easiest to wipe away: the butterfly effect is certainly a thing, but Spooner staying with her mom isn’t exactly killing baby Hitler here.

At the same time, repetition can blunt the power of the story, which is why I love the choice in “Speakeasy Does It.” Legends narrows the focus to two people who aren’t part of the team, so the show can address two very big, awful parts of the era they’re stuck in: racism and intimate partner violence.

Our two tracks are close to intertwining by the end of the episode. Gary, Nate, Ava, Sara, Zari, and Behrad are in Chicago trying to get on a train to New York, while Astra, Spooner, and Gideon are trying to beat them there so they can find a scientist who might be able to help them get home. The second group jumps a train from West Texas and hooks up with an all-woman jazz group, the Masqueradies, and the lead singer, Maude, helps them avoid getting tossed off the train for not having a ticket.

There are a couple of nice bits of retouching of Astra’s history as a former regent of Hell in this episode. The first is her extensive understanding of music business contracts, which she uses to get Maude and crew out from under their manager. The second is when she recognizes Maude’s boyfriend: Ross Bottoni, a real piece of garbage mobster who ends up in Hell, tortured under Astra’s administrative eye. When the gang realizes that Maude’s trapped in an abusive relationship with Ross (confirmed by Gideon, who shares with the team Maude’s brief future), Astra talks her into leaving, and Gideon takes the stage in Maude’s place.

Meanwhile, the other team is almost out of money because Gary is such a generous tipper (again, Legends goes out of its way to be the most pro-labor show on television). So they find an integrated speakeasy that’s running out of hooch, and decide to run liquor from their limitless supply in the House of Mystery and take a cut to fund their trip to NYC. This causes a problem for bartender Eddie, who had previously sourced his liquor locally, from crapbag mobster…Ross Bottoni, who beats the hell out of Eddie for diversifying his supply chain.

To fix this problem, Zari decides to throw a party at the House of Mystery to raise money so Eddie can buy himself a real bar, and her big draw will be infamous mobster sisters (according to the papers), the Bullet Blondes. And hot on their heels: robot J. Edgar Hoover. God, I love writing about this show.

The stories come together in what might be my favorite action sequence this show has ever done. We cut back and forth between Gideon singing; Gary and Nate having a deep, introspective character moment while beating the hell out of a couple of FBI agents; and Ava and Sara using their big song and dance number to capture robot Hoover. The fight choreography in the Gary/Nate part of the scene has a TON of character which makes the whole sequence really entertaining. Gary has Nate pegged as running away from serious relationships, while Nate pegged Gary as someone who…wants to be pegged, if we’re being completely honest. It’s great and fast, and Gary celebrating landing a punch had me laughing hard.

At the same time, Amy Pemberton can really sing, and the Ava/Sara fight/dance third of the sequence was really inventively blocked and shot. And the whole thing was edited exceptionally well. It was just crisp and fun and the perfect amount of whimsical and meaningful at the same time.

Narrowing the field of vision to how the team interacts with a couple of nobodies (in the grander historical scheme of the show) helped personalize the stakes in a way that focusing on regular characters couldn’t. It let the Legends fix some glaring problems with the world without breaking the premise of the show, and it also saw a stellar action sequence folded in.

It would have been impossible to top last week’s episode, but I’m a little shocked that the follow up episode was still this good. Maybe I shouldn’t be: Legends is still my favorite show on television.

Should Marvel Change MCU Strategy on Disney+?
Happy Valley Series 3 Episode 5 Review: James Norton Kills It As Tommy Lee Royce
Wynonna Earp Season 3 Episode 5 Review & After Show
Teen Wolf’s Tyler Posey and Crystal Reed Break Down The Movie’s Painful Twists
The Last of Us: What Happens to Bill and Frank In the Game?