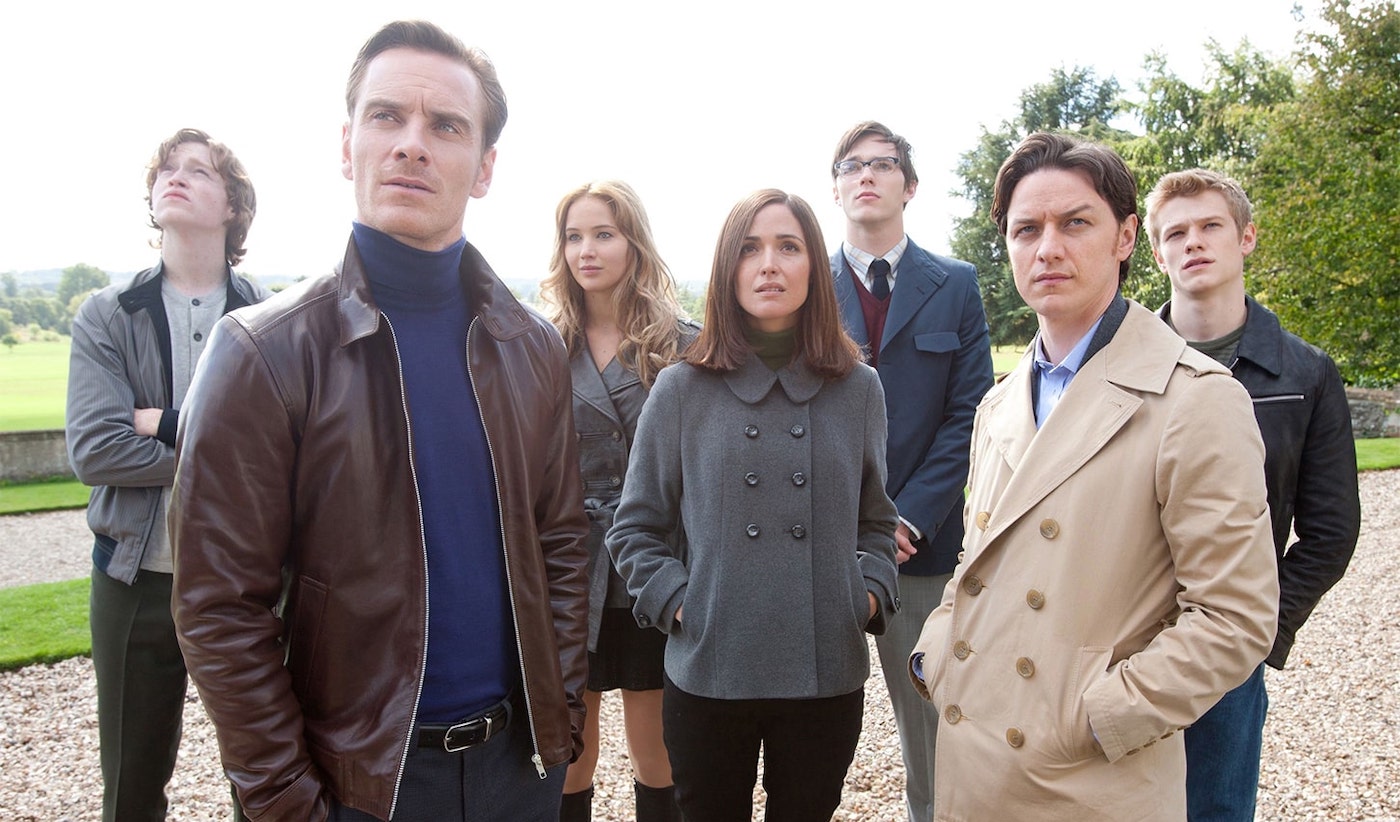 Matthew Vaughn’s X-Men: First Class is making its premiere on Disney+ this week. Normally, content that’s being added to a massive streaming service doesn’t need to be singled out. And yet, when looking back at that now 10-years-old and still groovy superhero adventure, it feels worthy of the spotlight, not least of all because there’s a whole new generation of superhero fans who’ve probably never seen what is quite arguably the best X-Men movie ever made.

In our current moment when fan culture constantly obsesses over what’s next—what year will we get that fabled reboot of the X-Men in the Marvel Cinematic Universe, and what will the cast look like?—high-water marks from the past tend to go forgotten. This is particularly apt for X-Men: First Class since the new era of fun go-go mutant movies that film promised ultimately went on to crash and burn with the bad and worse one-two punch of X-Men: Apocalypse (2016) and Dark Phoenix (2019). But it didn’t have to go this way. At its core, Vaughn’s 1962-set First Class was as much a soft reboot of the X-Men movie franchise as it was a prequel to the Bryan Singer and Brett Ratner films, and in some other universe the story it began might’ve ended quite differently.

For starters, Vaughn himself was originally slated to helm not just First Class but a whole trilogy of X-Men period pieces, which would’ve begun with the ’62-set adventure and culminated in the ‘70s with X-Men: Days of Future Past. But in between, we would’ve gotten something very different: a movie that didn’t throw away most of the First Class roster beyond Xavier (James McAvoy), Magneto (Michael Fassbender), and Mystique (Jennifer Lawrence).

Vaughn confirmed as much several years ago when he revealed to Max Evry at ComingSoon that the original plan was to do a second movie that would’ve further developed some of the background players, like Nicholas Hoult’s Beast, Banshee (Caleb Landry Jones), and of course Emma Frost (January Jones). All of these characters were part of an ensemble dynamic in First Class that emphasized a youthful exuberance in-keeping with the popular imagination of 1960s pop culture.

They were all set up to have expanded roles down the line, and yet with the exception of Hoult’s Beast—who’s character arc of accepting his mutation in the first film was jettisoned in the sequels—all of these side characters were killed off in the X-Men: Days of Future Past movie that got made by Bryan Singer. That film also brought back a focus on the original cast from the first cycle of X-Men films, not to mention Singer’s distinctly somber tone.

As Vaughn told Comingsoon that was never his original intention, and a second film would’ve involved introducing a young and recast Wolverine, with Vaughn specifically name-dropping Tom Hardy as his ideal casting for Young Man Logan.

“One of the reasons I didn’t continue [is] because they didn’t listen to me,” Vaughn said two years ago. “My plan was First Class, then the second film was a new young Wolverine in the ‘70s to continue those characters, my version of the X-Men. So you’d really get to know all of them, and my finale was going to be Days of Future Past. That was gonna be my number three where you bring them all [back].”

That obviously is not what happened.

X-Men: First Class felt like its own animal in 2011. While set (roughly) in the same timeline as the other X-Men movies made by Fox, the picture had a mischievous and playful tone alien to most movies directed by Singer, and at times Vaughn openly emulated the early Sean Connery James Bond pictures, with Fassbender’s vengeful yet suave Magneto being a dead ringer for 007 as he went Nazi hunting in Argentina.

But the sequel saw then-studio 20th Century Fox jump straight to Vaughn’s idea of adapting Days of Future Past, a seminal X-Men story from 1981 by Chris Claremont and John Byrne. Like that comic book story, time travel was used in the film to unite a grim dystopian future for mutantkind with the past, albeit in this case it was visualized as a grim 2023 teaming up with the few surviving heroes from X-Men: First Class in 1973. Meanwhile characters like Banshee and Emma Frost were killed off-screen in the intervening 11 years.

Vaughn still prefers his version of the idea. As he points out, what could be bigger or better than seeing Patrick Stewart’s Charles Xavier sharing the screen with McAvoy’s more youthful incarnation? But that’s why he wanted it to be the finale to a trilogy, as opposed to the direct sequel to X-Men: First Class.

“When I finished the Days of Future Past script with it ready to go, I looked at it and said, ‘I really think it would be fun to cast Tom Hardy or someone as the young Wolverine and then bring it all together at the end.’ Fox read Days of Future Past and went, ‘Oh, this is too good! We’re doing it now!’ And I said, ‘Well, what do you do next? Trust me you’ve got nowhere to go.’ Then they did Apocalypse, and it’s like… if you flip that round, even [Apocalypse] would have been better.”

He concluded, “Hollywood doesn’t understand pacing. Their executives are driving 100 miles per hour, looking in the rearview mirror and not understanding why they crash.”

The rest, as they say, is history. With that said, we don’t think it was a total squandering of First Class’ potential. Despite what came afterward—and the very real and disturbing allegations surrounding Singer—X-Men: Days of Future Past is a genuinely good movie. In fact, it may be one of the better superhero movies of the 2010s. With its focus on the character dynamics between McAvoy’s Xavier, Fassbender’s Magneto, and Lawrence’s little sister caught between the two leaders’ ideologies, as well as a more statesman-like version of Wolverine courtesy of a returning Hugh Jackman, it works as a somewhat more thoughtful blockbuster. It also made good use of its post-Vietnam War and dispirited early ‘70s setting (an aspect that period pieces Apocalypse and Dark Phoenix utterly failed at).

Honestly, there should have been a way to make good X-Men movies with the younger cast of characters after the Days of Future Past we got—or certainly better than the two mediocre movies produced between Singer and Simon Kinberg in 2016 and ’19. And we did get a great X-Men movie set again in the present (or close to it) via Jackman and Stewart’s swan songs as Wolverine and Xavier in Logan (2017), one of the finest superhero movies ever made. So it wasn’t all downhill after 2011.

Still, given how blandly repetitive the final mainline X-Men movies were, and how much more exciting and fresh X-Men: First Class felt at the start of the decade, one cannot help but wonder if Vaughn is correct in his assertion that his approach would’ve led to a cathartic finale for both eras, instead of at least one of them limping into post-DOFP ignominy. For what it’s worth, Vaughn certainly continued his Bondmania aesthetic to proper heights in 2015 with the dashing Kingsman: The Secret Service (the sequel on the other hand is a different story).

Either way, First Class will now be streaming on the same service where most folks watch their Marvel Studios films. And given First Class’ retro vibe, which in some ways feels most in line with the Silver Age of Marvel Comics in the 1960s than anything Marvel Studios has ever produced, and it’s willingness to riff on real world stakes like the Cuban Missile Crisis and secret Nazis hiding in South America, First Class feels decidedly unlike anything modern Marvel would ever make. Jackman even cameos to drop the most beautiful use of the “F-bomb” in superhero movie history.

So if you haven’t seen it or haven’t in a decade, give it another watch and enjoy a genuinely great X-Men movie unlike any other.

How Did the Cordyceps Infection Start In The Last of Us Games?
The Last of Us: How Long Does It Take to Beat the Games?
Pizza Tower Is the Best New Wario Land Game We’ll Probably Ever Get
The Sandman | Comic to Screen: Hob Gadling | #Shorts
Hogwarts Legacy PC Requirements: Can You Run the Game?