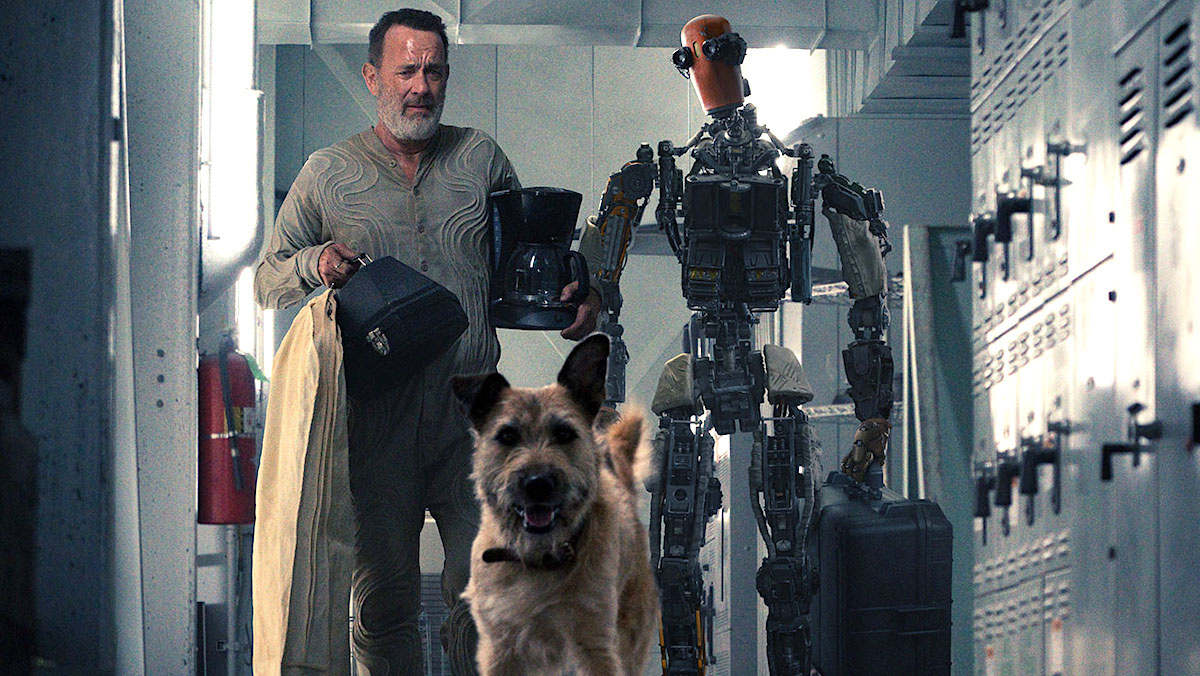 A lot has happened since Den of Geek was invited to visit the New Mexico set of Tom Hanks’ dystopian sci-fi movie, Finch, back in March 2019. For starters, Hanks became one of the very first high-profile COVID-19 cases, and the world shut down just days before the film was finished shooting. The movie was called “Bios” at the time of the set visit, and has since been brought from Universal to Apple TV+ (it’s available now). Like many film productions that were affected by the pandemic, Finch took an unexpectedly long and twisty path to finally make it to our TV screens.

So it was again a different world, to say the least, on that dusty, scorching hot, pre-pandemic backlot in Albuquerque over two years ago. Maskless members of the press were huddled together in a small building, talking to a cavalcade of cast and crew members, including Hanks and director Miguel Sapochnik. The biggest safety concern on set wasn’t hygiene or social distancing, but the risk of snakes biting at your ankles (one of the first people we were introduced to was a snake wrangler holding a bucket and a long hook). The setting felt appropriately post-apocalyptic, but in a way that is sort of wholesome in hindsight.

Tom Hanks and His Dog

The film is a futuristic fable of sorts. Five years after a solar flare effectively toasts civilization as we know it, robotics engineer Finch Weinberg (Hanks) is fighting for survival with his best and only bud, Goodyear, his insanely cute terrier. Grappling internally with his own mortality and his love for his dog, he creates Jeff (Caleb Landry Jones), a humanoid robot with advanced AI, to protect the little mutt.

“The ‘last man on earth’ is a familiar kind of trope,” says Hanks of the film’s setup. “But there’s no magic, no mutants, no aliens, no biker gangs. And it’s not a sequel! But there is a different sense of what loneliness is. When you see that there’s a dog in it, it becomes a completely different kind of movie.”

Most of the film’s stakes hinge on Finch’s desperate affection for Goodyear, and in that aspect, Hanks found the soul of the film.

“It’s a love story between a guy and his dog,” explains the Oscar winning actor. “Dogs teach you what love is and they worship you, and then they die on you. You have to put them down and it’s just the worst day of your life.”

“The dog is the heart of the story,” the director says. “And having the dog in the movie helps because whenever you see a man and a dog, you don’t think science fiction.”

One of the ideas that permeated the on-set conversations was that Finch is a family drama first and a sci-fi movie second. There are genre tropes and influences all throughout the film (the post-apocalypse milieu, the implications of AI, the road movie pacing), but the development of the connections between Finch, Goodyear, and Jeff is what propels the story at all times. “It’s a [different] kind of relationship movie,” Hanks explains. “You didn’t have to project anything onto it other than a simple premise: a guy had a dog, and it’s very dangerous outside, so how do you survive?”

“What we’ve tried to do is keep it real,” says Sapochnik of the creative process. “That’s been the mantra. Instead of it being ‘grounded sci-fi,’ we want it to be a drama that just happens to have a robot in it.”

That robot, played on set by Jones in a suit that would later be replaced by CGI in post-production, adds an intriguing wrinkle to this survival tale. For the hybrid visual effects creation, Sapochnik focused on capturing Jones’s performance as he would any other actor, not worrying too much about how the framing and camerawork would affect the effects work that would be laid over the performance later.

“We wanted to shoot it in a way where you forget that [Jeff] is a robot,” Sapochnik says. “The ideal scenario is that after two minutes, you don’t care that it’s a robot anymore. It’s a character. We’re treating it and shooting it like a drama and then overcoming the [CGI] problems later on.”

For Hanks, the key to the success of Jeff was freeing him from the cliches of robots in film by making him more dynamic and less rigid in his mannerisms and communication. In this way, Jones gets to express himself fully as opposed to playing an AI archetype.

“Jeff ends up being a free spirit as opposed to something predictable,” says Hanks. “Otherwise, it’s a combination of ‘Danger, Will Robinson!’ and ‘I’ll be back.’”

The director adds, “Finch curates the information that he puts in Jeff’s head, and Jeff makes choices, and the choices lead to questions and to him developing a personality. He’s a kid with way too much information. For him, it’s juggling that information and what it means. It’s an accelerated learning curve. He knows all this stuff, but he doesn’t necessarily know what to do with it. That’s his journey.”

From the beginning of their time together, Hanks and Sapochnik worked on fleshing out the finer details of Finch’s life to embed Hanks in the character as much as possible. The star even insists they were having the most intense script meetings he’s ever had on any project.

“There’s so much logic that has to be established about the world and when things happened,” Hanks considers. They would talk about how Finch had stumbled on a room full of ramen noodles prior to the events of the movie, but that he’d also already eaten it all by the time the audience meets him.

When asked if it’s important that the audience picks up on these hidden details, Sapochnik is firm in his position: It doesn’t.

“Whether they do notice or they don’t, the idea is that we’re building characters,” says the director. “I think it’s good when you’re developing characters to have a full sense of who they are. But the audience doesn’t need to understand that to be able to enjoy the movie.”

When you consider that Hanks is virtually the only human being you see in the entire movie, it’s difficult not to draw comparisons to Cast Away, another movie in which Hanks is isolated, in survival mode, having curious conversations with non-human companions. But for Hanks, the films’ similarities are only surface deep.

“Cast Away was by accident,” Hanks says of his character’s predicament in that movie. “He always knew that the rest of the world was going on [without him]. On Cast Away, we riffed on fire, shelter, water, and food. But a requirement for living is also company. I knew all of Wilson’s lines. I don’t know what Goodyear is thinking. There’s a different philosophical bent on trying to discover what’s out there [in Finch] and trying to get back to something that you know is [out there] in Cast Away.”

As for the challenge of carrying a movie mostly by himself, Hanks doesn’t exactly view it that way. “I almost don’t like to use the world ‘challenge,’ because it’s every fucking moment!” Hanks says of the stresses of making a movie. “They’re all minefields. No matter how many movies you make, you’re sowing the seeds for your own destruction every time they clack the slate in front of you. You’re aiming for something that you need to make real in the falsest environment imaginable. You want to warrant the attention that’s placed upon you because you’re the only guy in the movie. But it’s tough because you have to nail the moment, but if you’re caught selling the moment, you’re doomed. It has to be real somehow. But that’s what ends up being the blast of it.”

While Hanks was the star of not just the movie, but of the set visit itself (he graciously spent a good chunk of his lunch break to continue answering questions when he clearly didn’t have to), there were two other, unexpected guests that nearly stole the show.

In the movie, Finch has a robot named Dewey, who he built prior to Jeff as something of a prototype. Just as Jeff is modeled to be humanlike, Dewey is modeled to be doglike, but the difference is that, unlike Jeff, Dewey is a real-life, practical effects creation. In-person, Dewey is jaw-droppingly cool. As the effects team brings him into the room, they explain that he took three months to build from scratch and is composed of over 220 bespoke parts. It’s strange to feel an immediate emotional attachment to a robotic dog, but that’s precisely what the team was going for.

And then, there was Seamus, the terrier who plays Goodyear. He was as friendly and loving as could be, a rescue who went from living in a homeless encampment in LA and getting two surgeries for a piece of plastic lodged in his small intestine, to being adopted by a rescue organization and acting opposite Tom Hanks in a major motion picture. He lifted the spirits of everyone in the room (we had been shielding our faces from dusty gusts all day, so he was literally a sight for sore eyes).

Finch was made prior to the global pandemic, but the world being forever changed by COVID-19 contextualizes the movie in a new way. The filmmakers changed the ending to be less devastating in response to the global pandemic and the pain it’s caused, and perhaps focusing on the warmer aspects of the story, like Goodyear, was the right call. To Sapochnik, Seamus’ adorableness is what gives the movie its power.

“You’ve got these great actors, Tom Hanks and Caleb Landry Jones,” Sapochnik explains, “but whenever Seamus comes onscreen, everyone goes, ‘Aww!’ I never thought a dog could create such a superior reaction, but everyone crowds around on-set. The heart of the movie is the dog.”

Dave Bautista Has Talked to James Gunn About Future DC Movie Plans
Gunther’s Millions: The True Story Behind Netflix’s Rich Dog Docuseries
The Last of Us: What Happens to Bill and Frank In the Game?
SHAZAM! FURY OF THE GODS – Official Trailer 2
Why One of Star Trek: The Next Generation’s Worst Episodes Is Still Worth Watching