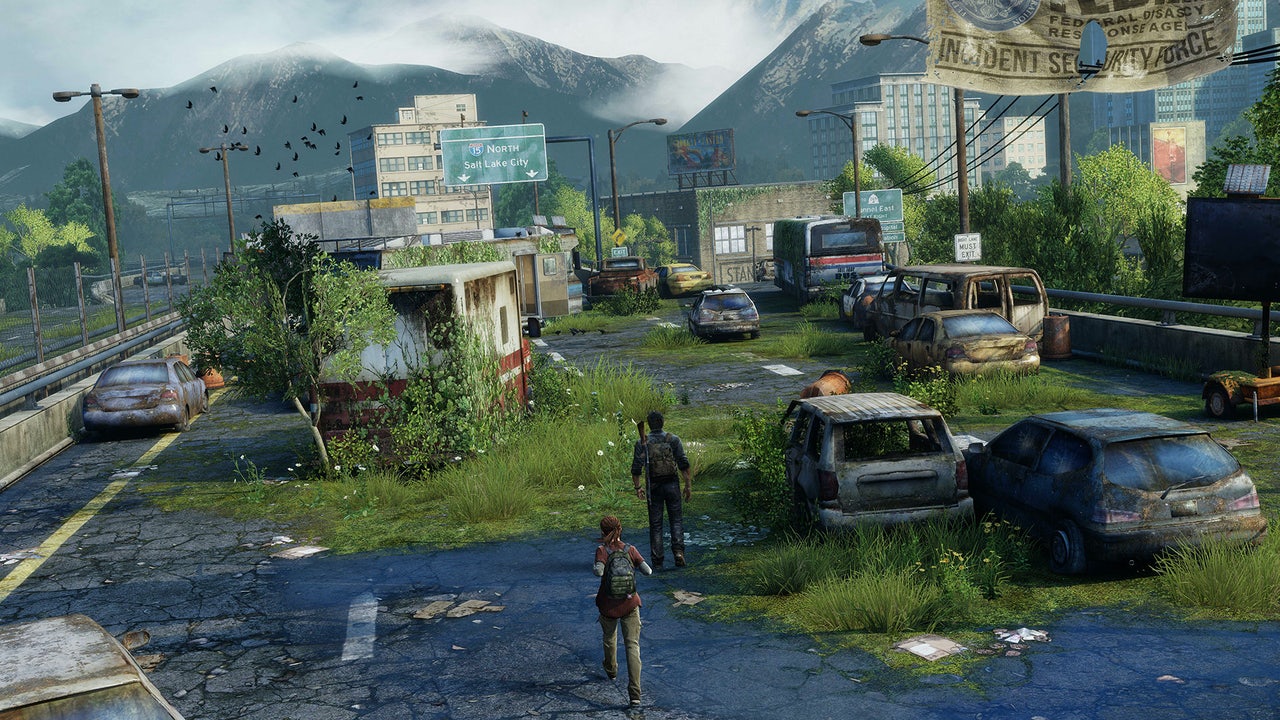 Production on HBO’s The Last of Us adaptation is in full swing in Canada. Already, fans have taken lots of photos from the show’s Edmonton sets, which offered up our first looks at Pedro Pascal as Joel, Bella Ramsey as Ellie, and Anna Torv as Tess. The scenes filmed there included the trio’s escape from the Boston QZ — the first section of the critically-acclaimed 2013 PlayStation game — with sets that showcased the dilapidation left in the wake of the Cordyceps outbreak that ravaged the planet before the start of the story.

Well, now filming has moved to other parts of Alberta, Canada, including the city of Calgary and the smaller mountain town of Canmore, where other locations from the game are being brought to life. As you’d expect, fans have quickly popped up in these locations to snap pictures of the new sets being built there.

As set photos reveal, Calgary is the site of the Boston QZ set — both the interior and exterior of the settlement. This is where Joel, Ellie, and Tess’ stories begin in the game, with the Boston QZ serving as one of the final strongholds for the pre-outbreak American government. Controlled by the Federal Disaster Response Agency (FEDRA), the Boston QZ is by all intents and purposes a walled military dictatorship in the remnants of the city heavily guarded by soldiers.

In order to keep the zone free of infection, citizens of the Boston QZ are prohibited from leaving the settlement, and are even gunned down if found outside the walls. When a terrorist group known as The Fireflies further threatens the stability of the zone, a guerilla war breaks out between the two factions, and Joel, Ellie, and Tess are caught in the middle.

While showrunner Craig Mazin (Chernobyl) has already confirmed that the show will tweak and expand certain storylines as needed for the small screen, set photos do suggest that the events at the Boston QZ will play out similarly to the game. Below, you can see images of the exterior of the settlement as well as some of the city streets.

“Welcome” reads the Boston QZ’s outer wall, but the signs inside the settlement tell a different story. FEDRA warns “Use of Force Authorized” if citizens wander into restricted military zones, something the game’s trio learns firsthand as they make their way past the QZ’s borders. Past set photos have already shown Joel and Tess leading Ellie into the Massachusetts State House, where they’re supposed to meet the Fireflies who hired them to smuggle out the child.

The Boston QZ isn’t the only location we’ll see in the series’ first season, though. The characters will also make their way to Jackson, Wyoming, the settlement run by Joel’s brother, Tommy, who will be played by Gabriel Luna (Agents of SHIELD) on the show. Tommy is a former Firefly member who fought back the FEDRA in the Denver QZ before moving on to Wyoming to find a more peaceful life. We haven’t seen Luna in costume yet, but we know from the games that finding Tommy is one of Joel’s main motivations for continuing his journey westward with Ellie.

Below, the town of Canmore in Alberta is being prepared to be transformed into the Jackson safe zone, which was explored in a bit more detail in The Last of Us Part II.

The transformation hasn’t happened yet, but you can already see the resemblance between downtown Canmore and the Jackson imagined for the games. According to the town’s official website, filming will take place at “800 block of Main Street (Nov. 16 – 19), 800 block of 14 St (Nov. 19), the Miner’s Hall parking lot (Nov. 16), and the Engine Bridge (Nov. 15).”

While HBO’s The Last of Us isn’t due out until sometime in 2022, we’ll keep you updated as we learn more details!

WoW Dragonflight: Every Class Ranked Best to Worst
His Dark Materials Season 3 Episodes 1 & 2 Review
WoW Dragonflight: Best Builds for Every Class and Spec
Strike Is Back For a New BBC Series: Recapping Cormoran and Robin’s Story So Far
The Best Marvel Comics and Collectible Gifts For Holiday Season 2022