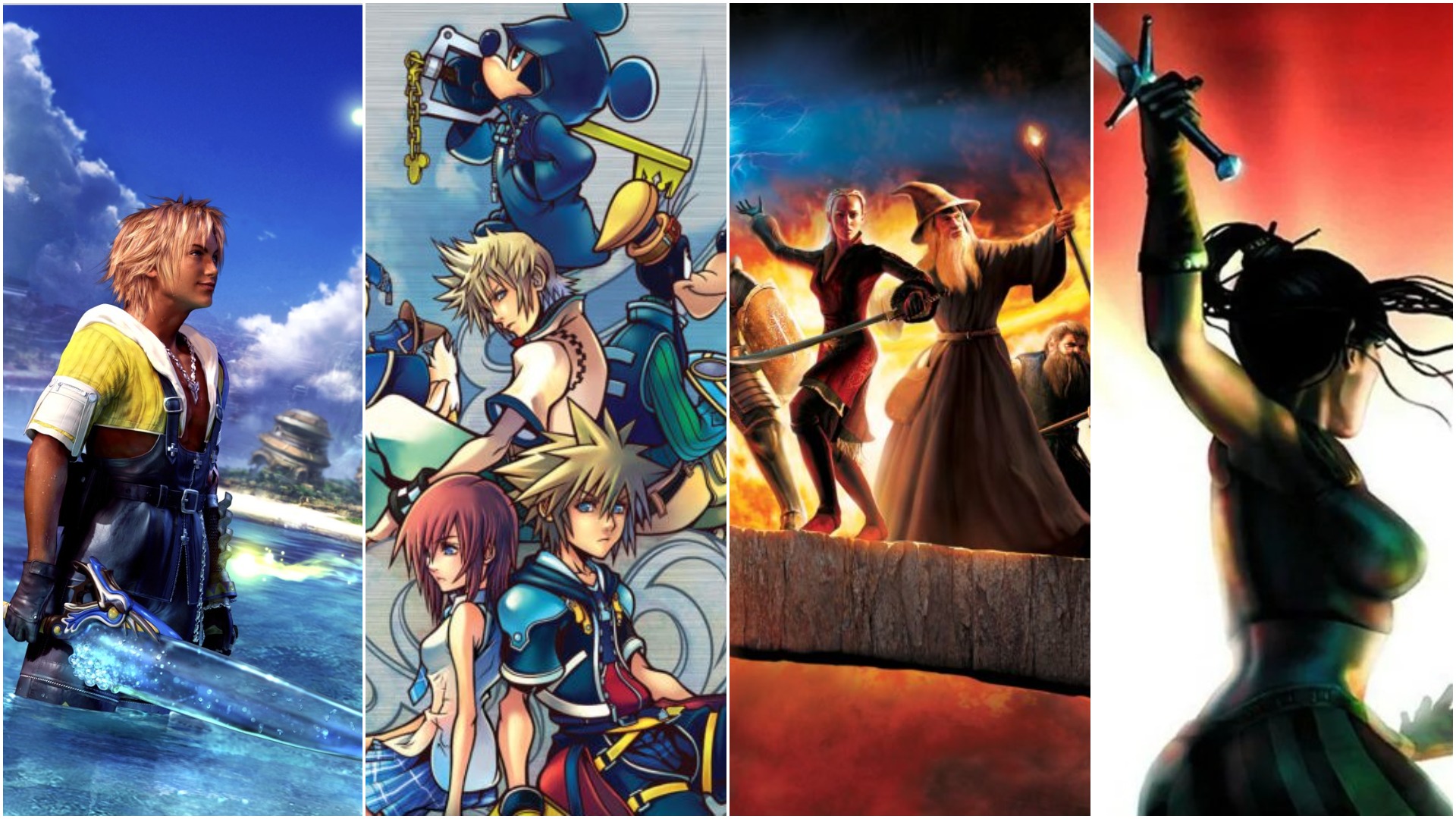 When we talk about the best RPG consoles, we typically focus on the SNES and the PS1 (and with good reason). However, there’s a strong argument to be made that the PS2 not only deserves to be in that conversation but could very well end up taking the crown.

The PS2 represents this incredible moment in the evolution of the genre when we were both benefiting from the ambition of the PS1 generation as well as getting to enjoy the ways that PS2 technology made true 3D gaming so much more viable than it had ever been before. The result was an elite group of developers finally getting the chance to watch their biggest dreams come to life in a way that was simply never possible up until that point.

You know what a couple of the games on this list will be, but a deeper look at the best PS2 RPGs will remind you just how deep this console’s roster of all-time great titles really was.

15. The Lord of the Rings: The Third Age

On the one hand, I do feel kind of bad putting this game on the list above titles that are a little more critically acclaimed, a little more innovative, and, in some cases, perhaps simply better than what was essentially EA’s Lord of the Rings-themed take on Final Fantasy X.

Yet, there is something to be said for the fact that The Third Age gave us a true Lord of the Rings RPG adventure at a time when the films were still the hottest thing in the world. This strange blend of film scene recreations and original storytelling gave fans the chance to dive into Middle-Earth again, and the game holds up remarkably well to this day as one of the best ways to relive your movie memories.

This absolutely bizarre post-apocalyptic RPG sees you play as a high-school student tasked with navigating a demon-filled version of Tokyo in order to battle the forces that control this realm. It’s a bit…weird, to say the least.

While this game’s fundamental weirdness is undeniably part of its charm, the bigger draw here is Nocturne’s weak spot-focused combat system and demon recruitment mechanics. There is so much depth and so much creativity on display in this massive adventure that you can easily forgive its punishing difficulty and occasional unevenness.

I’ve heard some criticize Radiata Stories for taking too long to “click” for them or simply never grabbing them at all. To be honest, I really do get those complaints. This game’s more relaxed style and often slow-moving narrative just aren’t for everyone.

Yet, I will always respect the way this game uses its NPCs. Along with being able to recruit over 176 NPCs who each bring their own stories and abilities to the fold, this game makes a simply admirable effort to ensure that every person in this world feels like they really live in this world. You can’t come close to seeing everything this epic has to offer in one playthrough, but those who love it won’t mind playing it again.

While Tale of Symphonia is often remembered as a GameCube RPG, this brilliant title’s eventual PS2 port means that it absolutely deserves to be in any conversation about this console’s best role-playing experiences.

Tales Of Symphonia’s art style and engaging story help elevate this title over some of its competition, but the real star here has to be this title’s wonderful combat system. Tales of Symphonia’s incredible battles fall somewhere between “strategy game” and “RPG,” but they will almost certainly keep you engaged from beginning to end in a way that few other genre titles can truly rival.

The PS2’s collection of surprisingly excellent ARPGs deserves to be celebrated more than they typically are, but what better way to kick off those overdue festivities than to talk about this incredible X-Men game that set a standard even modern superhero games are still chasing?

This ARPG’s massive roster of playable characters that can be upgraded with gear and XP is certainly its biggest draw, but it’s the way this game captures the feel of assembling the perfect team of characters and then having them do battle against incredible foes that elevates this surprisingly deep experience over lesser imitators we’ve seen over the years.

There are times when it’s hard to believe the Kingdom Hears franchise even exists. This dream project that was somehow also so far beyond our wildest dreams arguably reached its peak with the brilliant Kingdom Hearts 2.

This game’s worlds, bosses, and storyline all rank comfortably among the very best in this series, but it’s really the ways all of those things come together that make this one of the definitive PS2 RPGs as well as one of the most memorable games of this era.

If you had to knock Dragon Quest VIII for anything, it would likely be this sequel’s adherence to the tropes and ideas of its predecessors. This certainly isn’t the era’s most innovative RPG.

Then again, when you’re building upon the franchise that helped establish and define JRPGs, it’s hard to really knock you for sticking with what most certainly works. This is a truly epic and expertly well-crafted JRPG experience that so happens to also be one of the PS2’s best-looking overall games.

The word I most often hear used to describe Xenosaga is “deep.” It’s certainly a better description than the “complicated” tag that this RPG is sometimes assigned, but the truth is that there is no great way to summarize this game in just a word or two.

Xenosaga is a measured examination of the human condition that somehow manages to stretch the most intimate concepts across a galaxy-spanning adventure that feels as grand as any other RPG of this generation. I actually quite like this game’s combat and character systems, but it’s Xenosaga’s intriguing narrative that refuses to leave my mind.

Grandia II is arguably the best RPG ever released for the Dreamcast, so it shouldn’t exactly come as a surprise that the game’s PS2 port manages to secure a pretty lofty position on this particular list as well.

From its real-time battle system with almost RTS-like movement restrictions to its war-torn world populated with memorable characters and plots, Grandia II checks so many of the JRPG’s genre best boxes while offering a personality that is very much its own.

As a Lovecraftian horror RPG set in an alternate timeline version of WW1, Shadow Hearts: Covenant is one of those RPGs that is capable of selling itself by virtue of its core concepts and back of the box description.

Yet, like many of the games we’ll talk about on this list, you really have to experience Shadow Hearts for yourself to truly appreciate its depth.  From the incredible Judgement Ring that dictates most of the combat to the ways the Sanity Meter contributes to this JRPG’s underlying horror elements, Shadow Hearts is a bold swing at some brilliant ideas that more than makes up for its stumbles.

If Dark Cloud 2 was “just” its more traditional RPG elements, I feel comfortable saying that it would likely still find a spot somewhere on this list. It’s hard not to admire this game’s ARPG combat, narrative, and characters for both their unique charms and the way they imagined certain concepts that are far more common today.

However, it’s Dark Cloud 2’s time traveling and world-building systems that really set it apart. Building a better world and being able to look ahead in order to see the benefits of your designs is one of those incredible concepts that would certainly be replicated if it wasn’t so complex.

The Persona series has long garnered nearly universal acclaim for its absolutely bizarre narrative concepts, sense of style, and ability to translate the most wonderfully outlandish concepts into utterly compelling gameplay sequences.

There is a joy to this game that extends to nearly every aspect of its inventive design. Persona 4 reexamines nearly every aspect of the JRPG genre in such a way that both make them feel fresh again while also clearly paying tribute to the spirit that inspired them. It’s a striking testament to this genre’s potential that is also somehow accessible.

I remember that in the weeks and months leading up to Final Fantasy X’s release, there was this growing sense that this was going to be the PS2’s first true system seller as well as a significant new Final Fantasy game that could very well rival Final Fantasy 7 in terms of its impact.

Remarkably, I think Final Fantasy X managed to live up to a great deal of that hype. Final Fantasy X benefits from everything that this franchise accomplished up until this point while expertly solving what many considered to be some of the series’ gameplay shortcomings. In many ways, it remains the Final Fantasy game that is easiest to recommend to those curious to see why this is the one RPG series that has defined so many different generations and so many shifts in the genre.

Earlier in this article, I mentioned that the PS2 featured some incredible ARPGs that don’t always get the love that they deserved. Well, Dark Alliance has to be considered the star of that particular category.

Even if you convinced yourself to look at Dark Alliance as little more than a Diablo knock-off, it would still easily rank high among the best entries in that somewhat dubious subgenre. Yet, someone needs to speak out for the way this game made that formula not only accessible to console players but reimagined it in such a way that makes this one of the most purely entertaining co-op RPG experiences ever committed to any platform.

Final Fantasy XII was released to strong reviews, but it’s always been something of a divisive entry into this famed franchise. Some criticized the ways it significantly altered the Final Fantasy formula (which was only recently reinvented in Final Fantasy X), while others criticized smaller aspects of the game like its music, writing, and characters. To be honest, it feels like that discourse is still there to this day.

As time goes on, though, my respect for Final Fantasy XII has only grown. From its bold Gambit system that feels far more accessible and common now than it did when this game launched to the way it makes its overworld feel far more significant than it does in many other FF games, this game just excels at embodying the spirit of this franchise without ever feeling like its entirely relying on the series’ laurels.