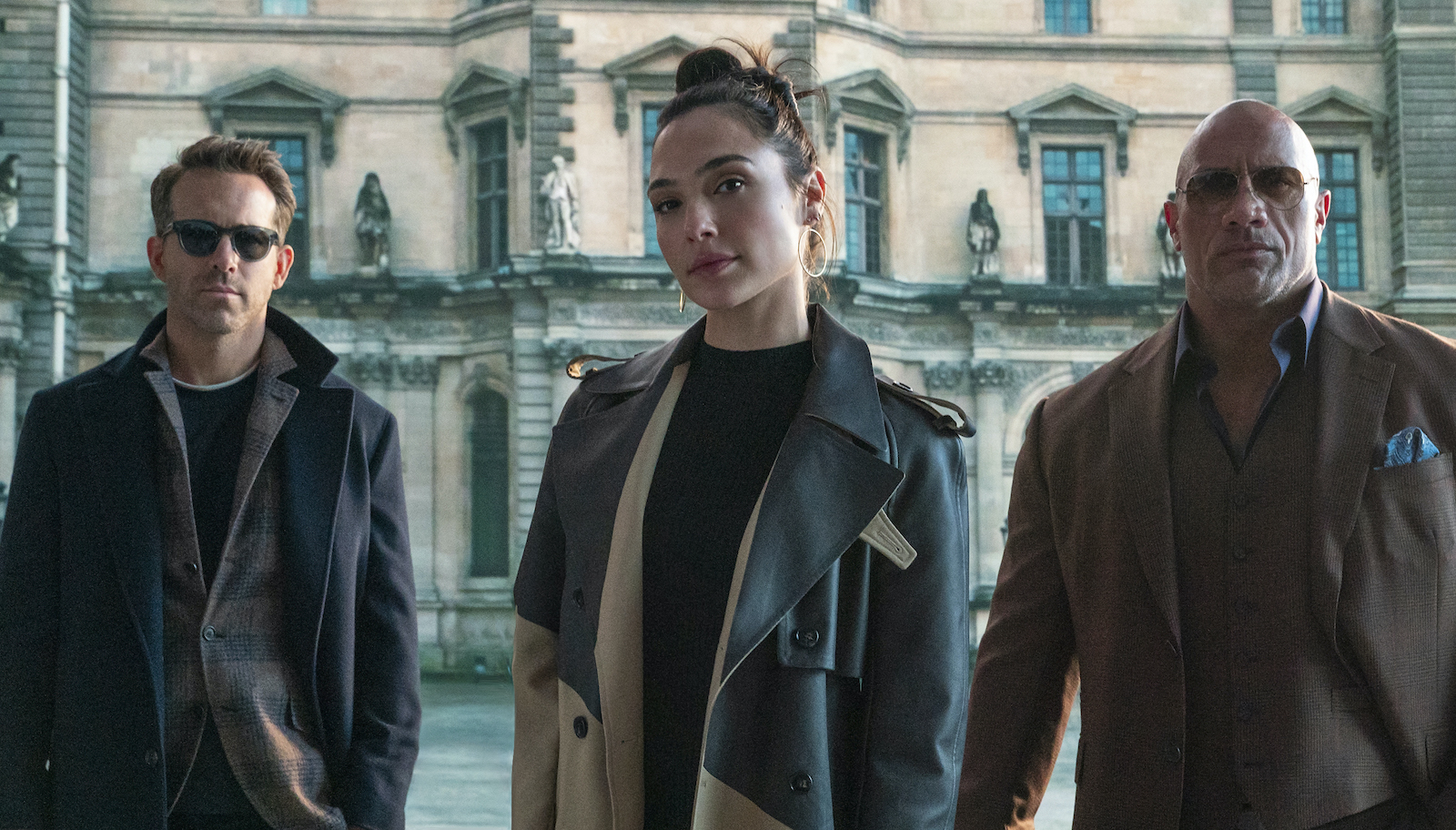 Red Notice will be writer-director Rawson Marshall Thurber’s third action film collaboration with his star of choice, Dwayne Johnson. And although this latest offering follows the familiar heist movie formula, the recognizable narrative patterns in all Thurber/Johnson collaborations are becoming their own trademark. Like Skyscraper (2018) and Central Intelligence (2016) before it, Red Notice is aware of its derivative nature, muting any audience expectations of realistic storylines or deep character development. But the action sequences, comedic moments, and star power, which here includes Gal Gadot and Ryan Reynolds, are undeniably entertaining enough to make up for the formulaic plot by virtue of just being so much damn fun.

Red Notice follows Johnson as FBI profiler John Hartley, who is liaising with Interpol in pursuit of Nolan Booth, the world’s greatest art thief played by Reynolds. In the style of Hobbs & Shaw, the two sworn enemies must reluctantly team up in order to catch an even more notorious cat burglar known as “The Bishop,” played with elegant charm by Gadot. Rounding out the cast are Ritu Arya, an Interpol agent seeking to prevent further thefts, and Chris Diamantopoulos, who plays the murderous, soft spoken Bond-esque villain nicknamed “Sotto Voce.”

The film builds its story around the fictional treasure of Cleopatra’s eggs, a trio of bejeweled orbs supposedly given to Egypt’s last ruler by her Roman lover, Mark Antony. Red Notice, a title which refers to those on Interpol’s most wanted list, begins mid-heist as Booth attempts to acquire one of the eggs, and a voiceover sequence informs viewers that the third egg has been lost to history, which adds an Indiana Jones inspired artifact hunt to the dapper jewel thief storyline.

The fact that none of the lead actors particularly look their part is a fact acknowledged almost immediately in Red Notice, but Hartley dismisses an Interpol agent’s skepticism of his role as a profiler simply by saying, “I get that a lot,” which is a typical tongue-in-cheek response for this film. Similarly, Reynolds’ Booth references narrative elements such as villain entrances, twist endings, and even the third egg MacGuffin with the same casual meta attitude. For instance, at one point he uses Indiana Jones’ exact outfit from Raiders of the Lost Ark.

The key to enjoying Red Notice is not to worry about such things. A car starts up after being in cold storage for 70 years? No problem! Booth flies a helicopter even after realizing all the controls are in Russian? Fine! Suspension of disbelief is par for the course in any Thurber film and almost all movies starring Johnson, and Deadpool fans almost expect Reynolds to break the fourth wall these days. This movie counts on the audience recognizing the narrative form and the actors, including Gadot and her signature Wonder Woman ability to kick serious ass.

But while the audience will leave satisfied with the twists and turns of Red Notice, they will learn almost nothing about its characters. Hartley and Booth bond as they discuss their overbearing fathers and how their childhood trauma informed their career choices, but that’s the only development any character really receives. Even those details seem to be pulled from the psychological consultant’s handbook employed by hundreds of modern action movies. Johnson and Reynolds make a fun pairing, but the odd couple vibe doesn’t measure up to that of others, including the one between Johnson and Kevin Hart in Central Intelligence.

The Bishop is an even more generic femme fatale, despite Gadot’s electric presence onscreen. Without even the cursory family history given to the other leads, the elite thief is forced to follow along behind the men, entrapping them in a continuous game of cat and mouse and occasionally joining them against a common law enforcement enemy. Red Notice tries to explain this away with a big reveal at the end of the film, but it’s too little too late for character development purposes. Again: tons of fun, but not particularly deep.

One thing Red Notice has that Central Intelligence and Skyscraper didn’t, however, is the possibility for a sequel. While Thurber has gone on record that his earlier Johnson vehicles are one-and-done films, the ending of this openly suggests that since the reluctant partnerships in this particular heist worked out so well, there might be opportunities for future collaboration. While the pandemic delayed this 2020 production and limited its theatrical release, its performance on Netflix as the streaming network’s biggest budget production ever will determine its fate and ultimately that of any sequel.

Beyond any behind-the-scenes plans, however, Red Notice stands alone as a fun action adventure film with writing that manages to feel fresh even though it’s as familiar as an old favorite blanket. Its characters may be cookie-cutter, but the charisma of Johnson, Reynolds, and Gadot fairly oozes off the screen, making us check our brains at the door and enjoy the popcorn fun of this action-filled romp.

Red Notice premieres in limited theaters on Nov. 5 and on Netflix Nov. 12.

The Last of Us: Can Ellie Infect Others?
How Did the Cordyceps Infection Start In The Last of Us Games?
Best Nintendo Switch Settings You Should Be Using
Dave Bautista Has Talked to James Gunn About Future DC Movie Plans
HBO’s The Last of Us: The Changes to Bill’s Story and the “Parallel Universe” of TV