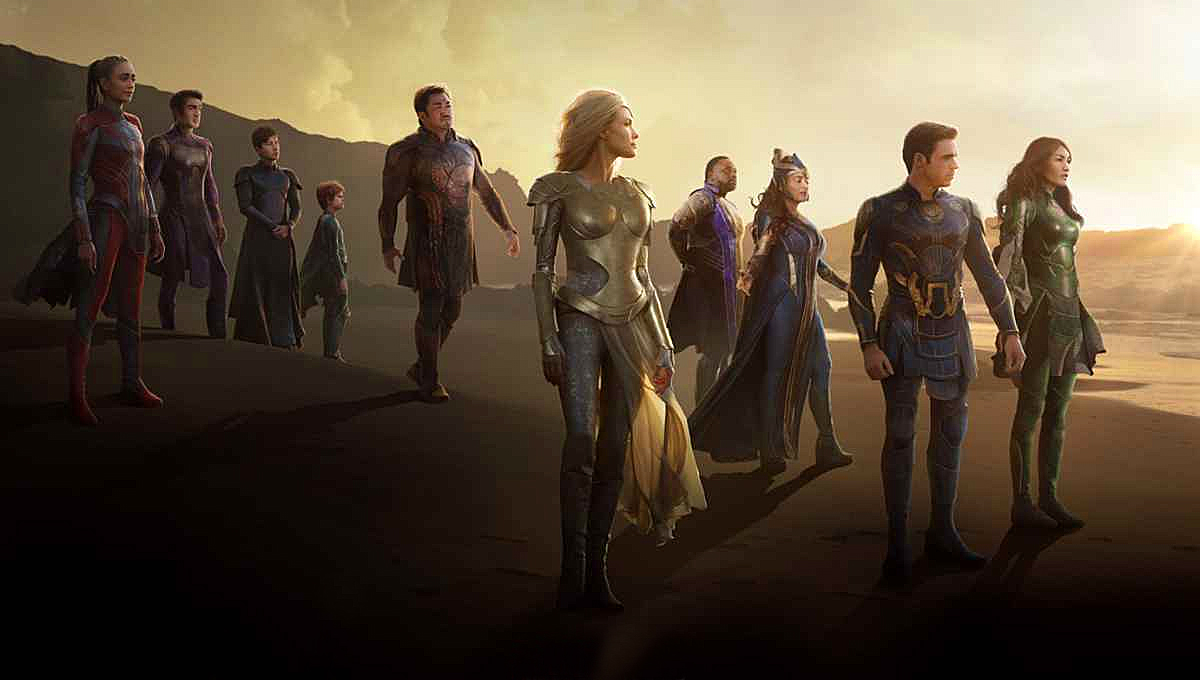 As moviegoers absorb Eternals, a new, conceptually-unique entry in the Marvel Cinematic Universe, sequel speculation has already started. While one might cynically conclude that such a development depends on the obvious aspect of the film’s box office performance, producer Nate Moore—who served on the film alongside company heavies like Louis D’Esposito and studio head honcho Kevin Feige—is implying that the choice ultimately comes down to artistic avenues. However, his answer also notably uses the dreaded s-word: standalone.

Marvel’s Eternals has indeed arrived, and, while reactions are mixed (check out our own review here), the film is being touted for having the temerity to break the Marvel movie mold, along with its diverse, unprecedently-sizable ensemble. However, the colossal cosmic concepts that drove the film’s similarly-titled comic source material—created by Jack Kirby back in 1976—became a blockbuster trial by fire for director Chloé Zhao, who came into the commercial crucible from the independent scene, notably with Nomadland, which recently won big at the Oscars, taking Best Picture and earning Zhao a Best Director win. However, as producer Nate Moore implies to The Toronto Sun, the film’s sequel prospects are not as clear cut as one would think.

“It’s not something that is a must-have,” says Moore with apparent ambivalence about an Eternals sequel. “Obviously, we have ideas of where we could go, but there isn’t a hard and fast rule where we have to have three of these things and this is the first.”

Moore gives a rather wishy-washy answer to a sequel question that, admittedly, can’t be answered in a responsible manner at this premature point in Eternals’ initial release window. However, it’s clear that a media blitz highlighting the film’s grandiose nature was intended to invoke the curiosity of pre-pandemic-minded audiences, seeing as its source material remains a rather deep cut in Marvel’s comic book lore, despite the comic title’s multiple reboots over the past decades, notably a 2021 relaunch that, by no coincidence, aligns with the release of the film. Yet, as with immediate MCU movie predecessors Black Widow and Shang-Chi and the Legend of the Ten Rings, the theatrical release of Eternals occurs against circumstances that unravel a carefully-concocted strategy, leaving a branding that once carried reliable sequel prospects uncharacteristically in flux.

However, while uncertainty currently defines Eternals 2, it’s not attributed to a lack of trying on the part of the current film’s plot. Indeed, following the climactic events (which we will carefully navigate in a SPOILER-FREE manner), the immense ensemble was left notably reduced but more solidified than ever, as emerging leader Sersi (Gemma Chan) and company come to the realization that Earth is worth saving, even against Celestial-level plans. The film also sets its place in the MCU by addressing the continuity difficulties that came with its very premise of powerful immortal cosmic beings living incognito on Earth—namely why they remained passive even during events like Thanos’s genocidal, population-halving Snap of Avengers: Infinity War.

Additionally, the film even continues the sequel-teasing MCU tradition of intriguing, seed-planting mid-credits scenes, hinting the comic-destined fate of Sersi’s mortal love interest, Dane Whitman (Kit Harington), and even introduces a Thanos-connected comic character from Jim Starlin’s Infinity Saga who was notably missing during the MCU movie version. It’s a notion that seemingly weakens any conceit—implied or otherwise—of Eternals being designed specifically as a standalone cinematic offering. Yet, it’s a notion that Moore maintains.

“We felt like there was enough story that it could be a contained universe,” continues Moore on the possibility of Eternals being left as a standalone. “We definitely have ideas of how things can cross over later. But this movie with 10 characters and Dane Whitman and the Celestials and the Deviants, there was enough for us to play with.”

Of course, Eternals arrives as part of the MCU’s multi-medium Phase Four slate, which kicked off in unconventional manner this past January with Disney+ TV series WandaVision; a lineup that had the misfortune of landing in the middle of the pandemic. Thusly, Moore might be hedging Marvel’s bets with his standalone claim. It’s understandable, since the film faces a performance bar that was significantly lowered from the $2.8 billion worldwide apex of 2019’s Avengers: Infinity War, during which any entry earning less than $1 billion worldwide was considered a disappointment. Comparatively, the $427 million recently grossed by Shang-Chi—a tally that would be anemic in normal times—is now considered a game-changing pandemic-era success. Yet, Shang-Chi arrived amidst equally-inauspicious circumstances, but still managed to resonate with audiences in a personal manner. However, the high-concept-driven Eternals is a different animal, and arguably a tougher sell.

Nevertheless, Eternals has already achieved an accolade, with its reported Thursday preview night domestic gross of $9.5 million having surpassed the $8.8 million earned by September’s Shang-Chi, which achieved its success during a more pessimistic, variant-fixated pocket of the pandemic. While that number still places Eternals behind the $13.2 million preview night numbers earned by July’s Black Widow and the $11.6 million of October Sony-Marvel sequel Venom: Let There Be Carnage, it could still be a sign that Eternals is getting off on the right foot in its opening weekend, especially with its international two-day tally boost of $19.8 million. Whether or not the money will ultimately talk loud enough to justify a follow-up remains to be seen.

Eternals is making its cosmic-powered case for a sequel at theaters now.

The Last of Us: Are the Infected Actually Zombies?
Batman: The Doom That Came to Gotham | Trailer | DC
Small Town | Marvel Studios’ WandaVision | Disney+
Dead Space Remake Release Time: When Will the Game be Playable?
FLASH FACTS | Official Trailer