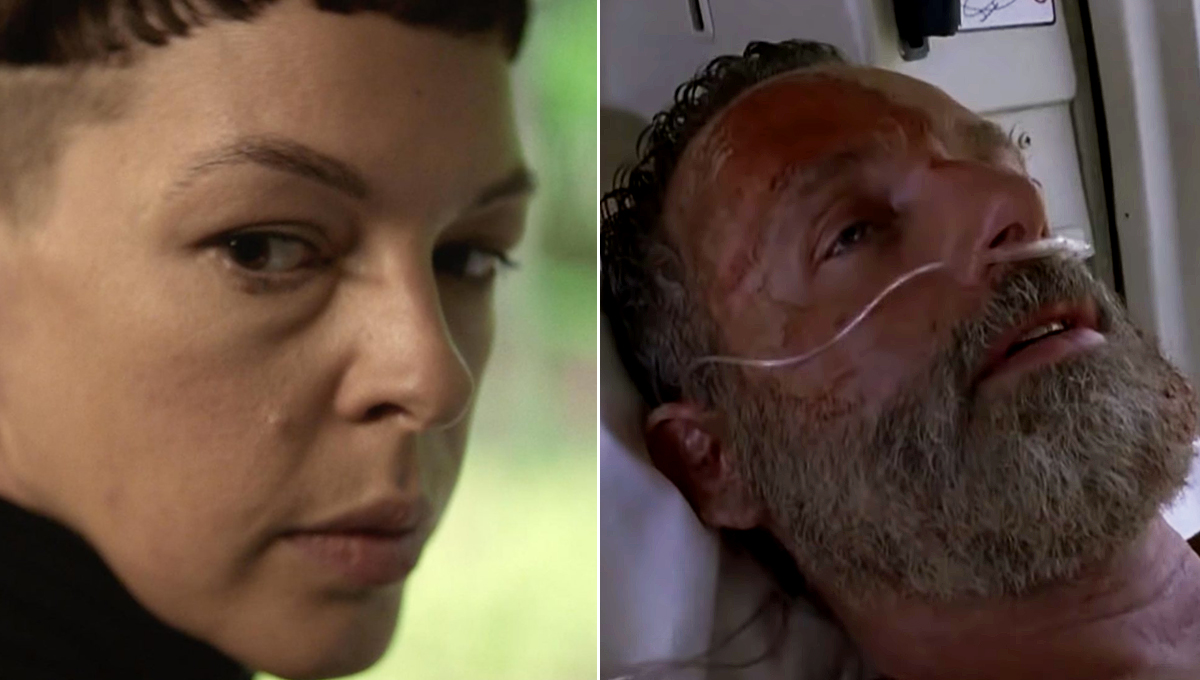 “I gave the CRM something very valuable and I got a new life.”

As massive and fruitful as The Walking Dead franchise has been for AMC over the past eleven years, its imminently-ending mothership series has been without main character Rick Grimes since 2018’s Season 9. While the absence was a result of star Andrew Lincoln’s exit, the grievously-wounded Rick escaped expected martyrdom to be kept afloat, quite literally, via helicopter in a move that set up surprise movie projects. Now, over three years later, spinoff The Walking Dead: World Beyond has the first update on our misplaced protagonist, thanks to the return of a certain former junk-dwelling hipster.

The Walking Dead: World Beyond was always expected to bring an update on Rick, seeing as its plot involves the advanced, continent-spanning post-apocalyptic (multi-series-crossing) organization, the Civic Republic (CR), whose helicopter—identified by a now-familiar symbol of three interlocking rings—flew a dying Rick to proper medical care, thanks to a deal made by the enigmatic Jadis (Pollyanna McIntosh) to join the super-community; a deal that presumably rendered Rick a permanent resident, classified under their still-mysterious taxonomy of a “B,” as opposed to an “A.” While that was six years earlier in the TWD timeline, the return of Jadis—now part of the Civic Republic Military (CRM)—nevertheless provides a potent clue about Rick’s fate as fans still await the long-gestating movie projects.

Jadis’s fateful deliverance of Rick has paid off substantially, as the character’s return on The Walking Dead: World Beyond Season 2, Episode 6, “Who Are You?,” makes abundantly clear. Indeed, her arrival at the CR compound setting reveals that she’s kind of a big deal now. Tellingly, Jadis showed up in a black, long-coat-accompanied CRM uniform that’s almost evocative of her days as leader of eccentric, avant-garde trash-heap-dwelling survivor group the Scavengers, except with a more facist flair, notably complemented by a new high-and-tight bowl cut. Not only is Jadis a fully-fledged member, she’s actually a high-ranking warrant officer sent by headquarters to investigate and root out what she calls “corruption, ineptitude and betrayal.” Yet, the character hasn’t quite let go of her connection to events on the mothership show, seeing as she’s going by Jadis Stokes, using an assumed surname that’s a clear tribute to her time as a resident of the Rick-led Alexandria community—under her presumably-real name, Anne—during which she was romantically involved with Father Gabriel Stokes.

However, a small serving of the juicy details for which all TWD fans have been patiently waiting for three long years would finally arrive during a subtly-adversarial conversation between Jadis and main-cast character Huck (Annet Mahendru), who, as it turns out, actually trained the quickly-rising rubbish raconteur upon her helicopter-rescued initiation into the CRM. Pertinently, Jadis recalls the circumstances that brought her into the CR—which she confirms was six years ago, delivering a definitive timeline declaration for World Beyond. After Huck identifies her as “a rescue,” Jadis recounts, “I was living by my wits in the wilderness. I created a little society quite quickly.” While she mourns her society of Scavengers, she cites the experience of losing them as a valuable lesson about making “the wrong alliances,” alluding to how they were slaughtered by the Saviors during All Out War.

Surprisingly, despite the surname tribute, this line seemingly reveals how six years of apparent CRM indoctrination changed Jadis’s perspective on siding with Alexandria—and Rick—during that bygone conflict. The vague suggestion would serve as a pertinent preamble to The Walking Dead Universe’s first update on the fate of Rick Grimes. “I had an opportunity, and I created a ticket to get into the Civic Republic,” says Jadis. “I gave the CRM something very valuable and I got a new life.” While Rick is not mentioned by name, the story she’s describing clearly aligns with the aforementioned mothership show events, which occurred in The Walking Dead Season 9, Episode 5, “What Comes After.” However, her classification of Rick as “something very valuable” to the CRM is profound, since it qualifies his designation of “B” as being an asset in which the organization is invested, rather than a disposable test subject for their post-mortem experiments, who are likely the “A’s.” Thusly, we can conclude that, six years later, Rick is still safely stowed away by the CRM for some greater purpose.

Interestingly, Jadis’s subsequent lines—focused on her newfound purpose in the CR—seems to carry nuance that could prove pertinent to the Rick angle. While she clearly declares her loyalty, stating, “It’s not just about moving up. I know that the Civic Republic is the last light of the world. My purpose is to create a new era on this planet,” Huck calls out the Kool-Aid-drunk drivel by responding, “The way you keep saying it makes me wonder if you believe it.” While one might chalk that up to the underlying tension between the two—since Huck believes herself to be the subject of Jadis’s investigation—it could also be the case that Jadis’s loud ambition hides a secret agenda, one that could prove potent to the eventual plot of the Rick Grimes movies.

For now, even the most minor detail of said plot remains a mystery, and the movie projects—once eyed in a pre-pandemic world for theatrical releases—are currently resting in pre-production purgatory. Nevertheless, Jadis’s World Beyond arrival will certainly stoke existing speculation. In fact, it arguably bolsters theories about a mentioned but never-seen character on the spinoff named Major General Beale, a shadowy higher-up on the CRM totem pole who even outranks designated big bad Lieutenant Colonel Elizabeth Kublek (Julia Ormond). Kublek’s status as Huck’s tough-love-instilling mother lends an intriguing political layer to Jadis’s investigation, since it’s possibly occurring under Beale’s orders. Yet, with World Beyond imminently ending its limited run, it is believed that Beale’s eventual onscreen arrival will reveal the main villain of the Rick movies. However, some of the more out-there theories even claim that Beale—in a surprise twist—will be revealed as Rick himself, possibly serving the CRM under the influence of brainwashing or memory loss from his injuries!

We’ll just have to keep watching The Walking Dead: World Beyond Sundays on AMC to see if any more morsels manifest about Rick’s fate. The second and final season is already past the halfway point of its 10-episode frame.

Other Space | Comedy Sci-Fi Series | Coming Soon to DUST on TV
Lost Big Bad Beetleborgs Pilot Would Have Ditched The Horrifying Flabber
Actual footage of me on the search to find the Westworld ending we all deserve 🙃 #shorts #dust
Batman: The Doom That Came to Gotham | Trailer | DC
Xbox’s Lack of Exclusives Has Been a Real Problem For the Series X/S Generation