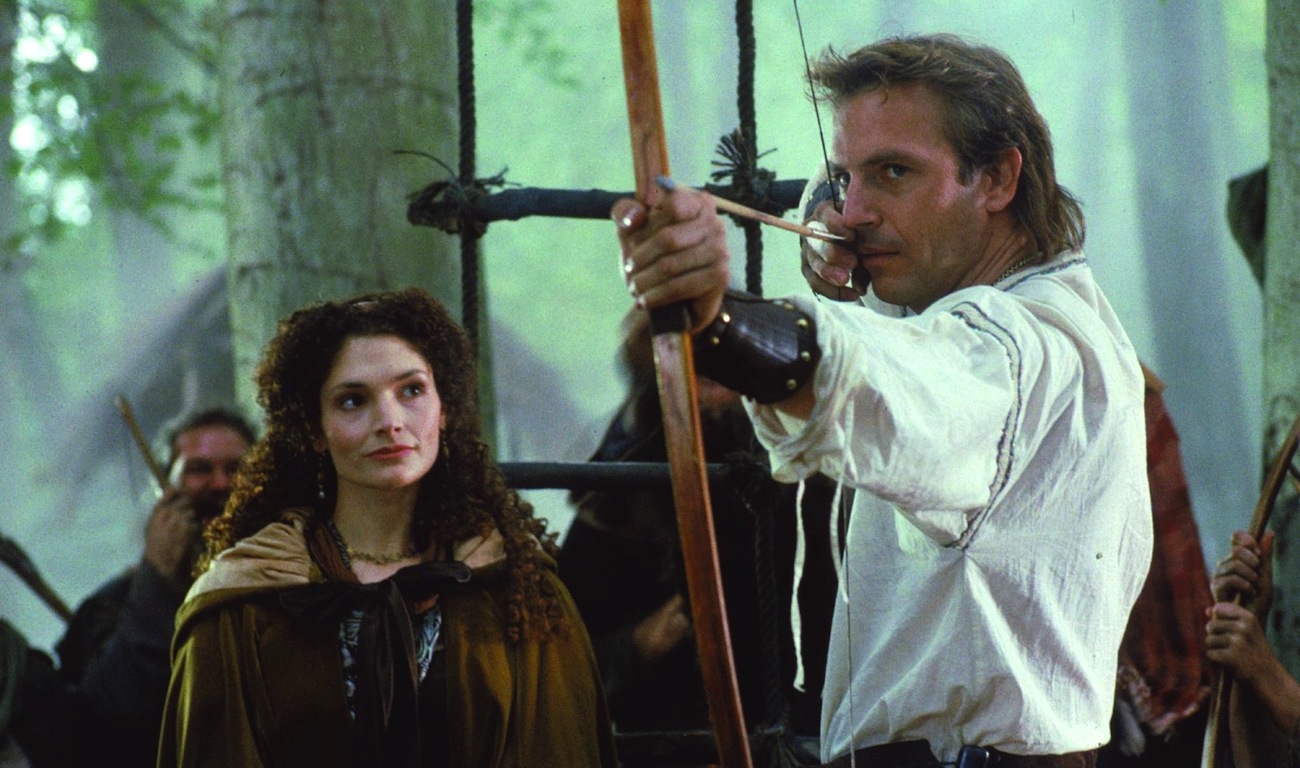 It’s strange to consider 20 years later, but once upon a time studio executives were obsessed with Kevin Costner playing Robin Hood. This is ironic, of course, since Costner’s English “accent” in Robin Hood: Prince of Thieves has become a meme unto itself over the decades. But nevertheless, we are still talking about his adventures in Sherwood Forest—and in what is still the last popular Robin Hood movie to make money and have an impact on pop culture. This might speak then to the logic of film producers circa 1990. And that extends beyond just those at Morgan Creek Entertainment and Warner Bros. Pictures, who greenlit Robin Hood: Prince of Thieves.

Indeed, that film’s director Kevin Reynolds recently confirmed during an interview that one of the reasons he was signed on to the project was in order to lure Costner away from a different Robin Hood movie that the star was then circling over at 20th Century Fox, and which would’ve been directed by no less than Die Hard and Predator’s John McTiernan!

While doing a career deep dive with the podcast Indie Film Hustle, Reynolds got candid about the strange mercurial nature of Hollywood moviemaking, particularly in the rarified air of blockbusters in the late 20th century. Once an indie wunderkind who wowed the likes of Steven Spielberg with his debut film Fandango (1985), Reynolds would become a go-to helmer of major studio tentpoles in the early ‘90s, which often happened to star one of the era’s biggest movie stars: Kevin Costner.

In fact, as Reynolds tells it, it was his personal relationship with Costner—which began in Fandango, Costner’s first starring role—that brought Reynolds to the attention of an unnamed Morgan Creek producer who approached him about helming Prince of Thieves. At the time, Reynolds was dissatisfied with an unnamed studio giving him the runaround on another project’s budget for more than a year. So when asked if Robin Hood would really begin filming in 1990, and getting a confirmation, Reynolds jumped productions in a matter of days. But once on the Warner Bros. Robin Hood movie, he learned the studio was secretly hoping he could poach Costner away from McTiernan’s movie, which had been in development much longer and was named The Adventures of Robin Hood (like the Errol Flynn movie).

“The next day after I got onto [Robin Hood], I got this call from Kevin,” Reynolds recalled, “and he goes, ‘Can I talk to you?’ And I go, ‘Sure.’ So he comes over to my new office and he walks in and he goes, ‘Did you know I was on this other Robin Hood with McTiernan?’ I went, ‘No! Are you serious?’ He goes, ‘Yeah, we were talking about doing this other thing.’ And I said, ‘I had no idea.’ And he was like, ‘No, God, okay.’”

But as Reynolds continued, this was the producers’ plan all along.

Said Reynolds, “Long story short, the producer, who was very wily, realized Costner was doing this, so he asked me to do [his] Robin Hood so Kevin would bail on the other one and come onto [my] Robin Hood. And that’s how it came to be.’”

It’s an interesting confirmation since there have been stories about Costner meeting with Fox, but the public record around McTiernan’s unfulfilled vision of The Adventures of Robin Hood mostly revolves around negotiations with Mel Gibson, who was also a major star on the make at the time after doing the Lethal Weapon and Mad Max movies (plus, almost inexplicably, Hamlet).

While many can smirk now about a Robin of Locksley by way of Southern California, Costner was indisputably the biggest star in the world by the end of the 1980s. After getting his big break in Reynolds’ Fandango, he’d go on to lead Brian De Palma’s biggest success of that decade, The Untouchables (1987), in which he starred opposite Robert De Niro and Sean Connery in the latter’s Oscar winning role. Soon afterward, he also appeared in instant baseball movie classics and Baby Boomer touchstones, Bull Durham (1988) and Field of Dreams (1989). And while even Morgan and Warners would be unaware of this when he was cast as Robin Hood, Costner was about to reach the zenith of his popularity later that year when his directorial debut, Dances with Wolves (1990), would become one of the most successful Westerns of all-time and win Best Picture and Best Director, beating out Martin Scorsese’s Goodfellas.

So landing Costner as the scourge of Sherwood was undeniably a coup, which bore green fruit when Prince of Thieves went on to become the second biggest movie of 1991, only being outgrossed by Terminator 2.

Still, it’s interesting to imagine what Costner might’ve been like in McTiernan’s The Adventures of Robin Hood. McTiernan was himself fresh off a golden moment in those years with Predator, Die Hard, and The Hunt for Red October all coming out back-to-back. And given Fox was developing their film for a longer period of time, the studio’s then-chairman Joe Roth very publicly badmouthed Morgan Creek and its allies in the 1990 press following Prince of Thieves’ signing of Costner.

“[They acted] unjustly, if not immorally,” Roth said at the time about Morgan Creek, according to The Los Angeles Times, as well as TriStar Pictures, which was developing its own Robin Hood movie that never got made. Fox’s then-production chief Roger Birnbaum also told the newspaper, “One of the other companies has announced the signing o a major star and that has given us pause… [but] I still have a magnificent screenplay.” He also said Gibson “looked at our project and liked it very much. But he was concerned about doing two period pieces in a row” after Hamlet.

Of course Fox’s Robin Hood didn’t get made with Costner or Gibson, or even McTiernan. However, the barebones of the treatment did make it to the screen in 1991’s glorified television movie which took the story treatment of what would’ve been McTiernan’s The Adventures of Robin Hood and produced it on a limited budget via Robin Hood, the forgotten version starring Patrick Bergin as Robin and Uma Thurman as Maid Marian.

It is somewhat unfair to judge what might have been McTiernan’s big budget Robin Hood movie based on a mediocre TV production, but honestly even if the same concept was better written and produced, it does feel like an inferior interpretation of the Robin Hood mythos than Prince of Thieves. Fixated on the legal rights of Sir Robert Hode, a young Saxon noble who in the reported early Fox drafts was a bit of a libertine who reluctantly becomes Robin Hood after being driven from his vanities by Norman authorities, the finished TV movie is missing many of the most popular staples associated with Robin Hood, including the Sheriff of Nottingham.

While Prince of Thieves was fairly revisionist in its own right—excising the villainous and historical figure Prince John and introducing a Saracen character with Morgan Freeman’s Azeem—the film took big steps away from the mythology, and more or less canonized the Azeem-like character in all future interpretations. But unlike the failed recent 21st century Robin Hood movies, or what many critics said at the time about Reynolds’ picture, Prince of Thieves still knew how to have swashbuckling fun, including with its supporting cast which was led by a BAFTA-winning performance from Alan Rickman as the greatest Sheriff of Nottingham to eer chew a scene.

Along with other sometimes overlooked attributes, including a rousing score by Michael Kamen which birthed one of the biggest love ballads of the ‘90s, Prince of Thieves has held up as a jolly good time and as a minor ‘90s classic—American accent and all.

Small Town | Marvel Studios’ WandaVision | Disney+
Dead Space Remake: How to Unlock and Survive Impossible Mode
Marvel Studios’ Ant-Man and The Wasp: Quantumania | Experience
The Last of Us: Are the Infected Actually Zombies?
How Did the Cordyceps Infection Start In The Last of Us Games?