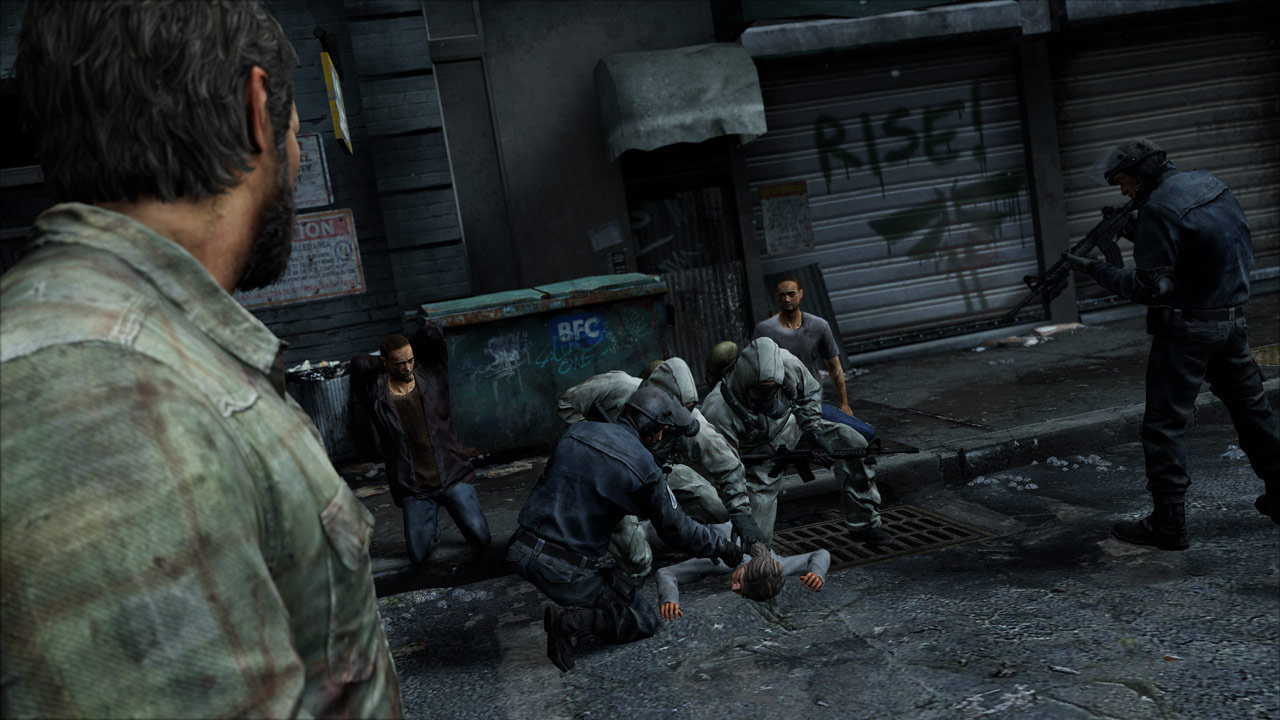 HBO has been busy filming its adaptation of The Last of Us in Canada, building sets for both the Boston QZ and the Jackson settlement around Alberta. We’ve already seen Pedro Pascal, Bella Ramsey, and Anna Torv in costume as Joel, Ellie, and Tess respectively, and it’s likely we’ll see Gabriel Luna as Joel’s brother, Tommy, very soon, as the show prepares to shoot scenes set in Jackson.

But there are also a few things we haven’t seen. While we’ve seen the devastation left in the wake of the Cordyceps outbreak, we haven’t actually seen any infected. How HBO will bring the gruesome Clickers, Shamblers, and Stalkers to life remains to be seen, and it’s the type of spoiler WB will go to great measures to keep under wraps, so don’t get your hopes up.

There are smaller fish that could pop up in the coming weeks, though, namely our first look at the show’s FEDRA soldiers, who are likely to be the antagonists of the early parts of the season. If you recall, the 2013 game opens with Joel and Tess helping a terrorist group known as the Fireflies smuggle Ellie out of the heavily guarded Boston QZ. This is anything but simple, especially once the soldiers of the Federal Disaster Response Agency catch wind of their escape. No one’s allowed out once they’re inside the QZ’s walls, and FEDRA soldiers can use any means necessary to stop citizens from escaping the de facto police state, so the trios mission becomes a race against time to reach the Fireflies before FEDRA can catch up to them.

A new photo (left) provides a tiny tease for the introduction of the FEDRA soldiers on the show. As you can see, the costume designers have faithfully recreated the FEDRA seal down to the smallest details:

That seal can be found all over the streets of the Boston QZ, such as signs warning “Use of Force Authorized” if citizens don’t stay within the settlement’s borders. As one of the last remnants of the shattered US government, the federal agency took over in the early days of the outbreak as the most important line of defense against the infected, moving citizens to large quarantine zones around the country in the process. But years after the initial outbreak, the FEDRA has turned against its citizens.

Expect FEDRA to be a major presence in the first few episodes of the show. One of these episodes just so happens to have been directed by The Last of Us creator Naughty Dog’s Neil Druckmann, who is also writing the series with showrunner Craig Mazin (Chernobyl). Druckmann recently posted a picture confirming that he’d completed work on the show, including the episode he directed himself, which we assume is set in the Boston QZ section of the season since the Jackson set is currently still being built in Canmore, Alberta.

It’ll be very interesting to see how Druckmann’s talent for directing video games translates to live-action. One thing is for sure: no one knows The Last of Us universe like he does.

The Last of Us will premiere on HBO sometime in 2022.

Other Space | Comedy Sci-Fi Series | Coming Soon to DUST on TV
HBO’s The Last of Us: The Changes to Bill’s Story and the “Parallel Universe” of TV
GoldenEye 007: Xbox Game Pass and Switch Online Release Time
Lost Big Bad Beetleborgs Pilot Would Have Ditched The Horrifying Flabber
Teen Wolf’s Tyler Posey and Crystal Reed Break Down The Movie’s Painful Twists