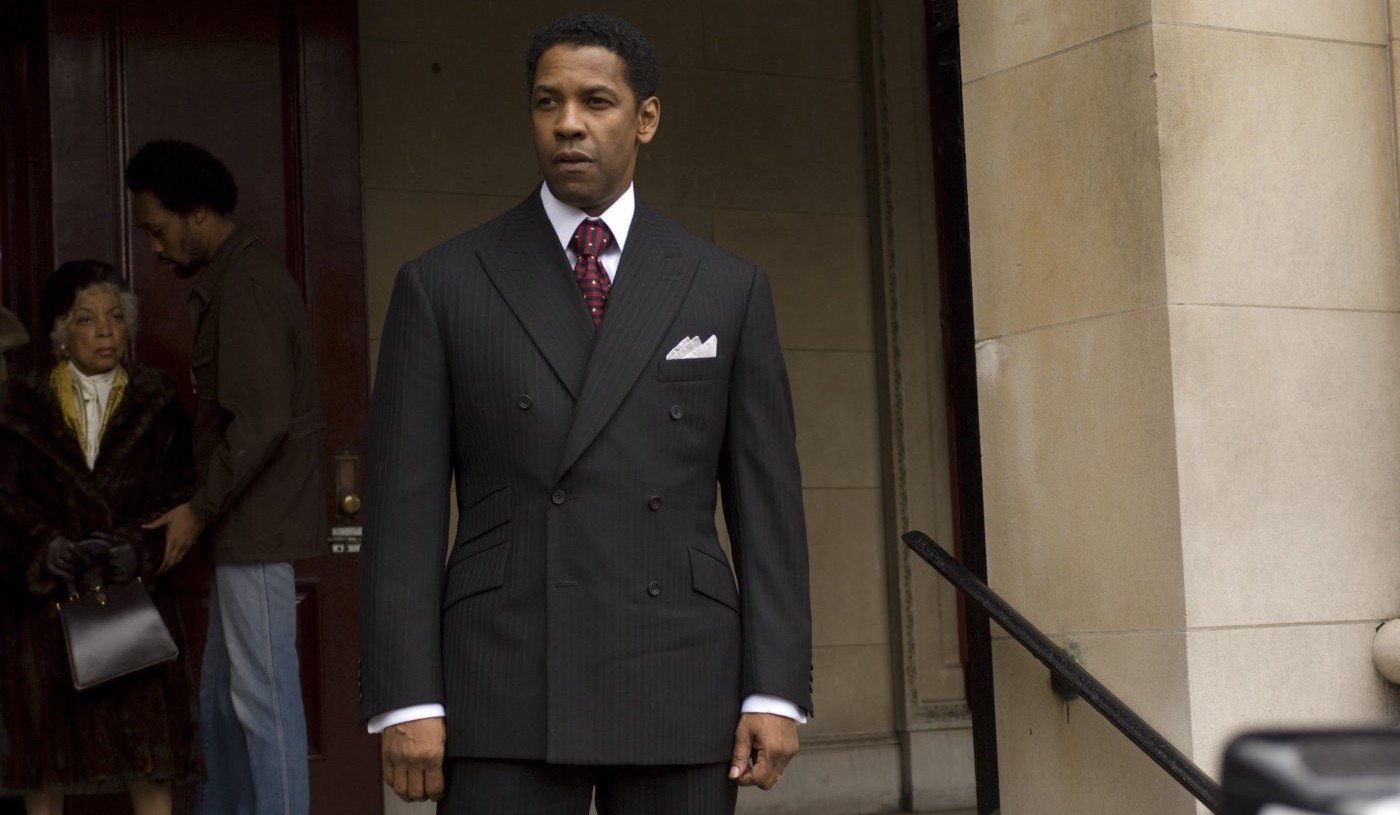 Ridley Scott’s 2007 feature, American Gangster, let Denzel Washington lead a regime change in uptown mob movies. That heralded position had always been held by Bumpy Johnson, who steered the underworld through the real-life Harlem Renaissance, holding his own against the Irish and Jewish mobs, and enjoying a long relationship with New York’s Italian criminal outfit. Partnered with Harlem’s crime queen Stephanie St. Clair and her gang the 40 Thieves, Johnson made his bones in the turf war with Dutch Schultz from the Bronx in the 1920s and ‘30s. Lucky Luciano gave the order to take out Schultz and declare Bumpy a family associate. Bumpy played chess with the head of the Five Families for years in front of the YMCA on 135th Street.

Laurence Fishburne played “Bumpy Rhodes,” based on Bumpy Johnson, in Francis Ford Coppola’s 1984 gangster film, The Cotton Club, and reprised the role as Johnson in the 1997 film Hoodlum. In the Epix television series, Godfather of Harlem, Forest Whitaker is paroled into the part. Clarence Williams III plays Bumpy in American Gangster. The film opens at his funeral and in his shadow. His lessons loom over a successor’s rise.

Frank Lucas was Bumpy’s driver, and right-hand man. In the late-1960s/early-1970s, he wasn’t just above the law, he was the top outlaw if American Gangster is to be believed. He held a higher street rank than any Mafia soldier, capo, or consigliere. In a world of made men, he was “the man,” a true drug lord with the “Blue Magic,” the most potent, least expensive, heroin in the entire city. Lucas tied off the main vein.

“The man I worked for, he had one of the biggest companies in New York City,” Washington’s Lucas says in American Gangster. “He ran it for more than 50 years. Fifteen years, eight months, nine days, I was with him every day. Bumpy was rich, but he wasn’t white man rich, you see he wasn’t wealthy. He didn’t own his own company. He thought he did but he didn’t. He just managed it. White man owned it, so they owned him. Nobody owns me though. Because I own my company. And my company sells a product that’s better than the competition at a price that’s lower than the competition.”

Set during the Vietnam War, American Gangster shows Lucas get his dope from Indochina, making the trip himself to cut out the middleman. If there’s one thing you learn in New York, it’s never pay retail, and the Kuomintang general (Ric Young) is bursting with product eager to move. In what comes to be known as the “Cadaver Connection,” Lucas and a family member, who is serving in the military, arrange to have the drugs sent to America hidden in the caskets of dead soldiers. Frank is an innovative entrepreneur, and this is a very interesting historical fact.

Washington plays Lucas as an untouchable. He earns his street cred by putting a hole in the head of his 20-percent-grubbing competitor, Tango (Idris Elba), in full view of anyone within a two-block radius, and sits back down to lunch. “You are what you are in this world,” he says by way of preamble. “That’s either one of two things. Either you’re somebody, or you’re nobody.” In that one scene, he goes from being Bumpy’s old driver to the new king in town. No one is going to rat him out. He is fully confident of this fact. The hood is behind him.

The film’s anti-villain, Det. Richie Roberts, played by Russell Crowe, gets as much play in the film as the title character, which makes American Gangster a hybrid of the gangster genre with the police procedural. Roberts is also an untouchable, but in the way of films like Serpico and The Untouchables. He is an incorruptible cop, the worst kind. Roberts’ child custody backstory at first appears to be character-building filler but is actually revelatory as a device to compare the fastidious family-first criminal and the rumpled clean cop.

Roberts is villainized by his fellow cops, for the same reason Washington’s Detective Alonzo Harris turns on his partner Jake Hoyt (Ethan Hawke) in 2001’s Training Day: he doesn’t take easy money. Both films blur the distinctions of neighborhood heroes. At that point in his career, the only other time Washington played a villain was in a 1990 Shakespeare in the Park production of Richard III. Lucas is a drug king who sees himself as a businessman, allowing Washington to reconstruct the conventional villain into a sophisticated and low-key ruler. Like he’s taught by Bumpy, a good shepherd rarely has to wave his staff, and a quiet leader barely has to lift a stick.

When the herd is out of control, however, Lucas knows how to clean house. He’s a mob ruler, and there are mob rules for a reason. You don’t shoot cops. It’s bad for business and brings down the heat. Lucas destroys a perfectly good piano door on the skull of a guy who kills a cop. But in the aftermath, he has the quiet reason to give carpet cleaning tips. “Ey, ey, ey, ey, don’t rub on that. You blot that, ya understand? That’s Alpaca. That’s $25,000 Alpaca! You blot that shit! You don’t rub it, put the club soda on there,” Lucas advises in one of the most memorable exchanges in the film. “Simple Simon ass motherfuckers.”

Washington’s Lucas also refitted mob rules of fashion. Traditionally, movie gangsters dress sharp and often loud. The first thing James Cagney’s Tommy Powers does when he makes bank in The Public Enemy (1931) is get a new suit. Humphrey Bogart’s Baby Face Martin in Dead End (1937) brags about his silk shirts. Little Henry Hill comes home in a new gangster suit with the money he makes keeping ice cold in Goodfellas. When Frank’s younger brother Huey struts into a nightclub wearing “a very, very nice suit,” Lucas trashes his threads. “It’s a clown suit,” he says. “That’s a costume with a big sign on it that says ‘Arrest Me.’ You understand? You’re too loud, you’re making too much noise.”

Lucas is one of the most soft-spoken gangsters in film history. This is a trait born of wisdom. “The loudest one in the room is the weakest one in the room,” he explains. His clothes reflect this. Lucas’ ensembles speak class, they don’t scream flash. Sandy brown, single-breasted suits with peak lapels, matching tie and pocket square, and brown leather oxford shoes, he downplays the chic and rarely gets funky. The one time he flexes his fabric, it is at his wife’s insistence: when he wears a $50,000 chinchilla coat with a matching $25,000 hat to the “Fight of the Century,” the 1971 Joe Frazier and Muhammad Ali match. He tosses that coat into the fireplace after the FBI notices the finery.

Also starring Chiwetel Ejiofor, Josh Brolin, Cuba Gooding Jr., John Hawkes, Carla Gugino, Ruby Dee, Armand Assante, and Joe Morton, American Gangster is a solid offering in the mob movie genre. It is set during the heyday of Blaxploitation films but exploits nothing but true crime drama. Director Scott melds the two genres confidently, keeping his focus precise and the story straightforward. The shooting gallery scenes are shot realistically, but not graphically. The women who sprinkle “Blue Magic” into marketable product, do it naked, so they can’t steal any, but not with any hint of the male gaze of nudity. It is business, as usual, which makes it unusual. This is further evidence of how Lucas subverted  mob rules.

The other great thing about this film is its two-hour and 37-minute runtime. Not a frame is wasted, and it gives the story a chance to breathe. The real Frank Lucas was arrested in 1975, convicted and sentenced to 70 years in prison. He only served five years because he became a government informant. Released in 1981, he got caught selling heroin and was sent back to prison in 1984. He was finally let out for good in 1991.

Denzel brings a different man to the street at the end of the film. He’s done. Gangsters aren’t known for long lives. Movies rarely show them stepping down. American Gangster is not as well known as Goodfellas, New Jack City, or The Godfather films, but it is as epic as any of them. It also subtly changes the dynamic, and the only reason Washington’s Frank Lucas isn’t as well known as Sonny Corleone is because he ruled unobtrusively, and went away quietly.