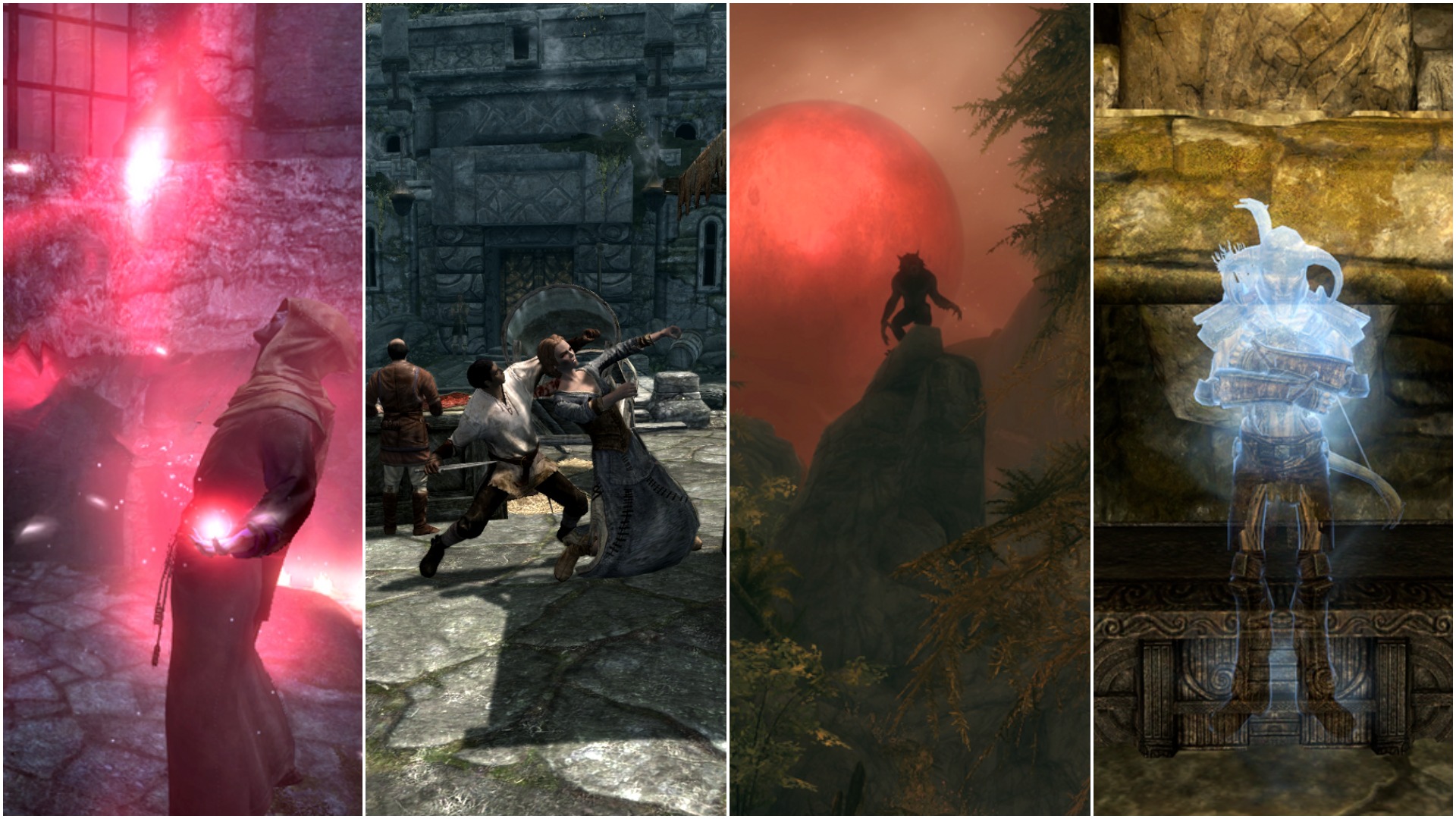 As much as we all like to joke about Skyrim‘s various re-releases, the fact of the matter is that there are only a few video games ever made that could be released that many times and still tempt you to play them again. Well, a big part of the reason why it’s so easy to return to Skyrim time and time again is the game’s quests are so good.

In a previous look at the best quests in Elder Scrolls history, I mentioned that Skyrim‘s quests aren’t quite as good as those in Oblivion. While I stand by that potentially controversial statement, I’ll also say that the sheer number of quests available in Skyrim and the diversity of those quests means that everyone has their favorite quest that they consider to be the absolute best. We could talk about the 50 best quests in Skyrim and maybe not touch upon someone’s favorite.

However, I think that there are a few quests in Skyrim that everyone has to experience regardless of their preferences and playstyle or how many times they’ve played this beloved RPG.

Dinya Balu, a priestess of the Temple of Mara, wants you to spread the grace of the Divine by helping various people across Skryim who are looking for love or are experiencing relationship troubles. Before the journey’s end, you will have even reached into the afterlife to help a romance shattered by war become whole again.

The fact this is one of the rare great Skyrim quests that isn’t dependant on combat makes it notable enough, but it’s the way this quest genuinely tugs at your heartstrings that makes it so memorable. Of course, those who make a…particular set of choices might instead remember this as one of Skyrim‘s darkest hours.

The Dragonborn has been recruited by the Stormcloaks to help take over the city of Whiterun and hopefully turn the tide in their war against the Imperial forces. Will this be the battle that helps end this bitter conflict?

Skyrim‘s civil war storyline struggled to realize its full potential, but the epic battle at the heart of this quest and the way it forever alters the game’s landscape certainly makes the most of what this entire concept could have (and maybe should have) been. I love Skyrim‘s more intimate quests, but the sheer spectacle of this quest is impossible to deny.

A Nord named Christer says that his wife Fjola has been kidnapped by bandits. He begs you to track her down and bring her home. Soon, though, you discover that there is so much more to this request and Fjola and Crister’s relationship than meets the eye.

There are a few Skyrim quests that effectively “swerve” your expectations, but this has to be one of the absolute best in that particular category. Twists aside, it’s the details of this storyline that may leave you struggling with the concepts of “right and wrong” as well as whether or not a happy resolution is even possible.

The Dragonborn has been tasked with recovering the fragments of the legendary Gauldur Amulet. The last known owner of the amulet was killed by his three sons who all wished to possess it. What happened to the amulet after that, though, and is it even possible to put it back together again?

What I love most about this quest is the way that it manages to be both truly epic in scope while largely relying on dungeon dives and similar “classic” role-playing experiences. This quest’s storyline also goes to show just how much thought and effort went into this universe and its mythology.

The occupants of Frostflow Lighthouse have been murdered, and the circumstances of the event suggest that this is so much more than one of the many (often bandit-lead) random acts of violence that plague this land. In fact, a quick trip into the lighthouse itself reveals that there is something truly strange happening here.

Deep below the College of Winterhold rests a gauntlet of unknown origins and purpose. The call of this mysterious item prompts the Dragonborn to find out just what this thing is and what it was designed for. Incredibly, the answers to those questions are even more bizarre than the relic itself.

This is a fantastic example of a kind of “organic” Skyrim quest that you have to find and solve with relatively few obvious hints of what to do next. It’s possible that even veteran players haven’t found this quest yet, but those who know it will likely agree that the payoff is more than worth the effort.

9. The Mind Of Madness

An apparent vagrant named Dervenin worries that his master has gone on “vacation” and may never return. Desperate for a sign of his presence, he asks you to investigate his last known location and find out just where his beloved master is. Do so, and you’ll soon discover that the mysterious master is none other than the trickster prince known as Sheogorath.

Sheogorath quests in Elder Scrolls games are usually a pretty good time, and this is absolutely one of the most purely enjoyable Sheogorath quests in the franchise. It’s basically the Skyrim version of a Psychonauts level, and it will almost certainly make you appreciate just how wild this game really is.

The city of Morthal has been struck by tragedy after a man named Hroggar lost his wife and child in a house fire. Strangely, it seems that Hroggar decided to move in with a new lover pretty much immediately after this tragic incident. The townspeople are suspicious, and they’ve asked you to investigate Hroggar’s possible role in this incident.

Wherever you think this storyline is going next, let me assure you that it is not what you think it is. Laid to Rest is one of the most tragic, surprising, and haunting quests in Elder Scrolls history. Don’t play this one unless you’re emotionally prepared to deal with what you’ll find.

A commoner named Sinding has just brutally murdered a child and seemingly awaits death. Before that happens, though, the murdered child’s father wants to know why Sinding decided to commit this unspeakable crime. The answer to that question begins a truly unexpected adventure.

Without diving too deep into spoilers, I’ll just say that this quest does a fantastic job of exploring the emotional core of one of Skyrim‘s most popular (if sometimes misused) monsters. It leaves you doubting your own instincts and even uses a choice between two incredibly valuable in-game items to make your decisions even more difficult.

The citizens of Dawnstar have all been experiencing similar nightmares that won’t seem to go away. A quick look into this scenario suggests that there is indeed a malevolent force behind these bad dreams which must be stopped. However, it’s simply not clear how you’re expected to do that.

Waking Nightmare isn’t necessarily the most complicated quest, but the quality of the quest’s writing is a testament to the team’s commitment to this somewhat strange idea as well as their ability to add real emotional weight to such an otherworldly concept.

The town of Windhelm has lived in terror of a mysterious serial killer who has haunted their happy home for far too long. Following the discovery of the killer’s latest victim, they beg you to please discover their identity and wake them up from this nightmare scenario.

There is no shortage of “murder mystery” quests in the Elder Scrolls series, so it’s quite telling that Blood on this Ice has to be considered one of the best. The depth of this quest and the many ways it allows you to fail help separate it from other Skyrim quests that may be just a touch too structured.

The Thalmor ambassador has been accused of being involved with the dragon attacks that have rocked Skryim. Unfortunately, his lofty position and fortress-like home make it nearly impossible to get close enough to discover the truth. However, a party at the ambassador’s home may just offer the perfect opportunity to find the information you need.

As I’ve mentioned before elsewhere, this is really one of the best testaments to the idea of “problem-solving through role-playing” that we’ve ever seen in an Elder Scrolls game. While there are other studios that do that concept a bit better than Bethesda, the various ways you can approach this scenario effectively remind us that they are some of the masters of this genre.

3. To Kill an Empire

The Dark Brotherhood has tasked you with killing the Emperor, which quickly proves to be both a blessing and a curse. While the assignment is seen by many as an “honor,” it’s not clear how you’re ever going to pull this off. Fortunately, the opportunity to disguise yourself as one of the Emperor’s chefs soon presents itself and offers a rather unusual way to complete this task.

Skyrim‘s Dark Brotherhood missions generally can’t compete with those in Oblivion, but this is just such a fantastic example of the dark comedy and creative design that often makes the Dark Brotherhood assignments as good as they are. It also has to be said that this features one of the best endings of any Dark Brotherhood quest.

An assassination on the streets of Markarth prompts a man named Eltrys to ask the Dragonborn to investigate the circumstances of the murder as well as how it may be related to a feud between the Forsworn and the Silver-Blood family. Yes, it’s another mission that sees you play as a “private eye,” but it soon becomes clear that you may be a pawn in something so much bigger than a single murder.

I absolutely love the way that this quest unravels a substantial conspiracy as you play it. It’s basically a noir in the style of an Elder Scrolls game, and, if you happen to be a fan of both of those concepts, you’re absolutely going to love how this quest plays out and where it ends up.

1. A Night to Remember

A mysterious stranger challenges you to a drinking contest and then invites you out for a night you’ll never forget. Unfortunately, that turns out to be a lie as you soon wake up in a mysterious location with no memory of what happened the night before and no idea where your drinking buddy is. You soon take it upon yourself to find the stranger and maybe figure out what kind of trouble you both got into.

Yes, this is one of the “sillier” quests on this list, but for me, the best Elder Scrolls quests are the ones that take you to truly unexpected places and let the team really flex their creative muscles. From the premise to the pay-off, this is absolutely one of the best examples of why Skyrim‘s greatest quests remain some of the most beloved experiences in gaming history.

This is quite simply one of the most enjoyable, creative, and appropriately memorable quests in any Elder Scrolls game.