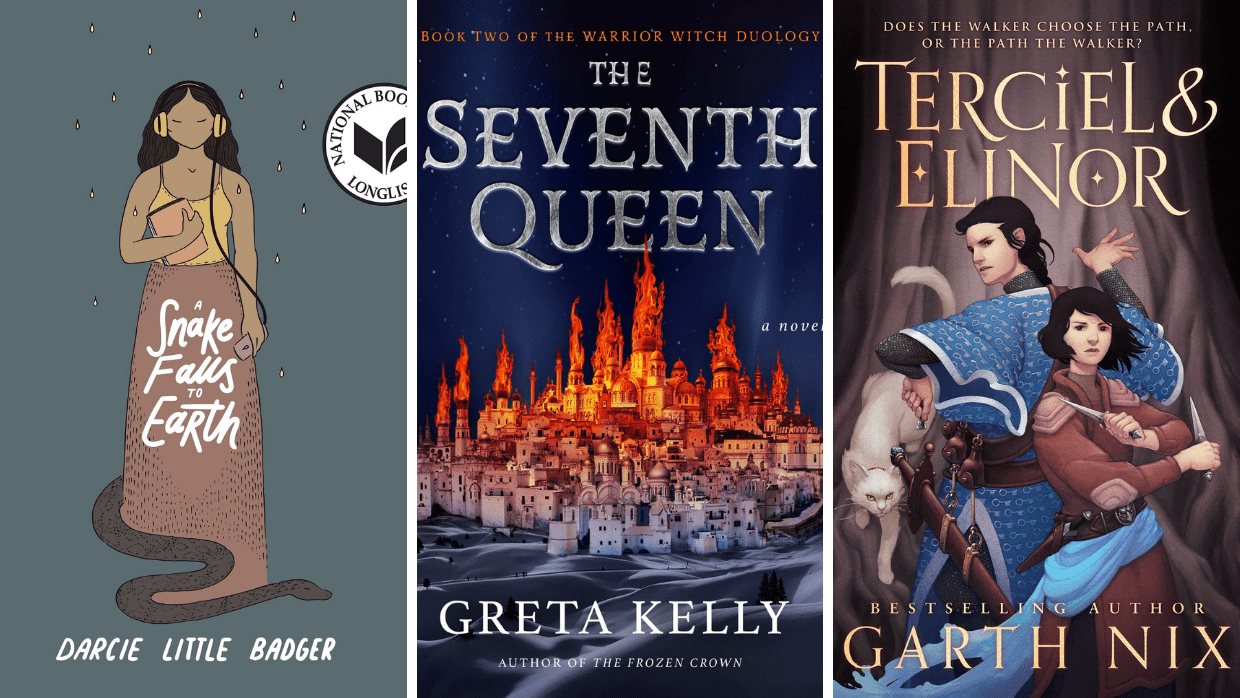 Today’s young adult books bring romance, adventure and social commentary. Take a look at our best bets for what to read this November.

The Seventh Queen by Greta Kelly

Den of Geek says: This buzzy fantasy sequel is popular for a reason. Critics and readers praise the “gripping” story and female characters in the series, which started with The Frozen Crown.

Publisher’s summary: The Empire of Vishir has lost its ruler, and the fight to save Seravesh from the Roven Empire is looking bleak. Moreover, Askia has been captured by power-hungry Emperor Radovan, who plans on making her his wife simply so he can take her magic as his own, killing her in the process. Aware of his ex-wives’ fates, Askia must find a means of avoiding this doom, not only for the sake of Seravesh, but now for Vishir as well. She must put both nations first and remember Ozura’s advice: you must play the game in order to survive. Askia was born a soldier, but now it’s time to become a spy.

But it’s hard to play a game where the only person who knows the rules wants to kill her.

And time is a factor. The jewel Radovan has put around her neck will pull her power from her in thirty days. Worse, Vishir might not even have that long, as the two heirs to the throne are on the verge of civil war. Without any hope for help from the south, without any access to her magic, alone in a hostile land, Askia is no closer to freeing her people than she was when she fled to Vishir. In the clutches of a madman, the only thing she’s close to is death.

Yet she’d trade her life for a chance to save Seravesh. The problem: she may not have that choice.

A Snake Falls to Earth by Darcie Little Badger

Den of Geek says: Darcie Little Badger became one to watch with Elatsoe, whose charming main character and portrayal of Native American life meshed well with fantastical beings and social commentary. While this one is more middle grade than young adult on some official listings, Little Badger’s previous book proved to us her work is magical for all ages.

Publisher’s summary: Nina is a Lipan girl in our world. She’s always felt there was something more out there. She still believes in the old stories.

Oli is a cottonmouth kid, from the land of spirits and monsters. Like all cottonmouths, he’s been cast from home. He’s found a new one on the banks of the bottomless lake.

Nina and Oli have no idea the other exists. But a catastrophic event on Earth, and a strange sickness that befalls Oli’s best friend, will drive their worlds together in ways they haven’t been in centuries.

And there are some who will kill to keep them apart.

A Snake Falls to Earth is a breathtaking work of Indigenous futurism. Darcie Little Badger draws on traditional Lipan Apache storytelling structure to weave another unforgettable tale of monsters, magic, and family. It is not to be missed.

Buy A Snake Falls to Earth by Darcie Little Badger.

Terciel and Elinor by Garth Nix

Den of Geek says: Some Millennial readers like myself grew up with this prolific author, especially his beautiful and uncanny fantasy series The Old Kingdom (starting with Sabriel). This newest installment should work as a stand-alone, as it’s a prequel concerning the main protagonist’s parents.

Publisher’s summery: In the Old Kingdom, a land of ancient and often terrible magics, eighteen year-old orphan Terciel learns the art of necromancy from his great-aunt Tizanael. But not to raise the Dead, rather to lay them to rest. He is the Abhorsen-in-Waiting, and Tizanael is the Abhorsen, the latest in a long line of people whose task it is to make sure the Dead do not return to Life.

Across the Wall in Ancelstierre, a steam-age country where magic usually does not work, nineteen year-old Elinor lives a secluded life. Her only friends an old governess and an even older groom who was once a famous circus performer. Her mother is a tyrant, who is feared by all despite her sickness and impending death . . . but perhaps there is even more to fear from that.

Elinor does not know she is deeply connected to the Old Kingdom, nor that magic can sometimes come across the Wall, until a plot by an ancient enemy of the Abhorsens brings Terciel and Tizanael to Ancelstierre. In a single day of fire and death and loss, Elinor finds herself set on a path which will take her into the Old Kingdom, into Terciel’s life, and will embroil her in the struggle of the Abhorsens against the Dead who will not stay dead.