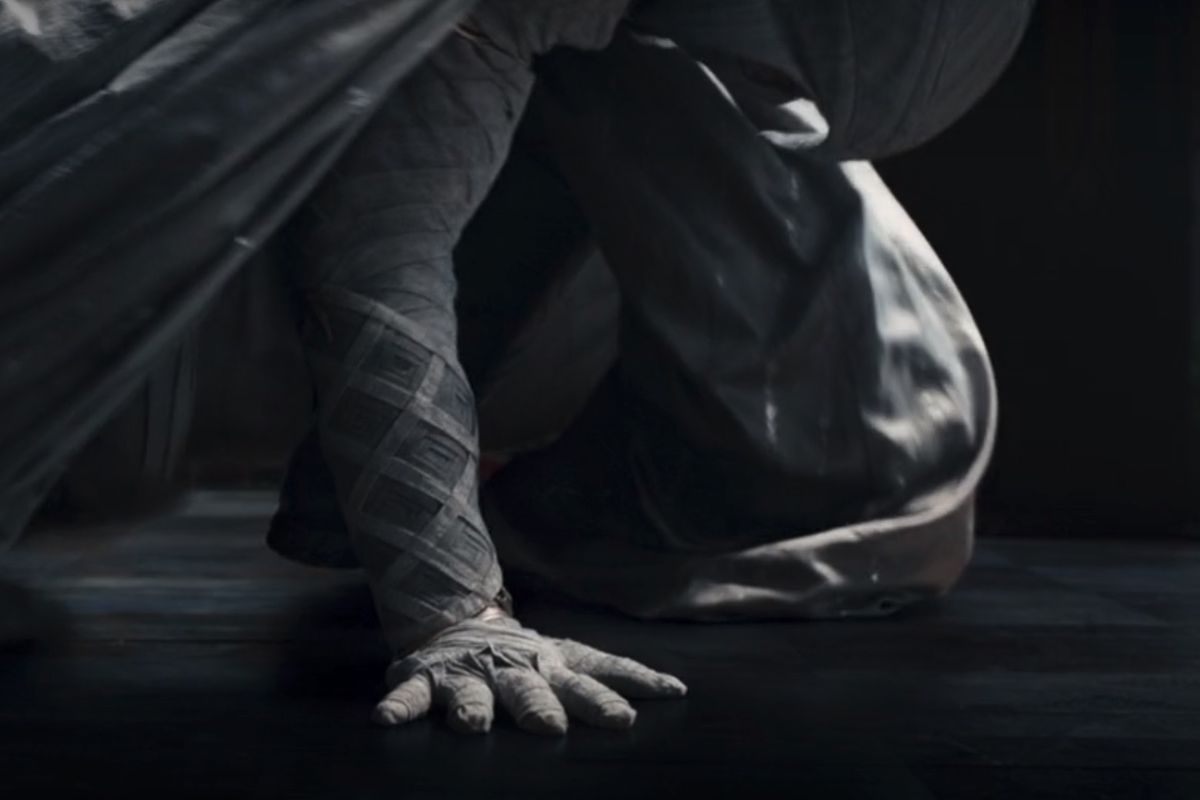 Well, well, well. Disney+ has just delivered a few first looks at some of its upcoming MCU series, including She-Hulk and Ms. Marvel, and the highly anticipated Moon Knight was among them!

The Oscar Isaac-led Marvel project (which we hope will go some way to making up for the actor’s previous Star Wars treatment at the Mouse House) has been cloaked in mystery until now, but the first mini teaser trailer for the show gives us tantalizing glimpses at what we’ve got in store.

The teaser opens with a shot of Isaac’s central character of Marc Spector waking up, and quickly cuts to him tentatively looking around a darkened museum. We see some Egyptian iconography here, which is essential to the character’s background.

In Marvel Comics, Marc was once a mercenary for hire, but was left for dead in the desert in North Sudan near the Egyptian border on a mission that went very badly wrong. Close to expiring, he was revived by the Moon god Khonshu, who appointed him as as his avatar on Earth in exchange for saving his life.

We see Marc’s reflection acting independently; visual representation of his fractured psyche: not only does Marc have the powerful Khonshu now rattling around in his brain, he also suffers from dissociative identity disorder, and is often overtaken (occasionally unwillingly) by his other identities, including the wealthy Steven Grant and cabbie Jake Lockley.

Moon Knight will find Marc and his identities “thrust into a deadly war of the gods against the backdrop of modern and ancient Egypt,” according to Marvel’s official synopsis.

In the trailer, we hear Isaac say “I can’t tell the difference between my waking life and dreams” in a painful British accent, indicating that in the forthcoming series we will be meeting an already-very troubled version of Marc.

After seeking vengeance for the fateful mission that pushed Marc into Khnoshu’s questionable web, the comics version of Marc moved to New York and worked on his crime-fighting Moon Knight persona. His Grant identity acted as the money man, and his cabbie personality Lockley found it easier to hear dodgy dealings at street level. But soon, managing all his different personalities weakened the central one, and Spector has often had to try and find coping mechanisms to deal with the effect that his disorder has on him.

To be clear: none of this background is really confirmed in the teaser, but it’s likely that the show will draw from it pretty liberally. As the antihero Moon Knight, Marc becomes a vigilante who dishes out brutal justice on the streets, which has often (wrongly) got him slapped with a “Marvel’s Batman” label, and that side of the character is on full display in this first footage from the show.

The One You See Coming

The first glimpse of Marc’s costume seems to lean more towards the all-white three-piece suit version of Moon Knight as introduced by Warren Ellis and Declan Shalvey in their 2013-14 run. This “Mister Knight” take on the character was pretty popular with Marvel fans.

A white costume is generally considered a staple of Moon Knight’s aesthetic and attitude towards his murky heroics. By opting for an unmissable look instead of the darker, shadowy costumes adopted by vigilantes like Batman, Moon Knight came to be known as “the one you see coming.”

We notice Marc hiding in the museum and covering his mouth so as not to make a sound. In the background, a dark CGI creature with glowing eyes approaches him as he cowers in fear.

Marc’s fear doesn’t linger for too long after that, as we soon see him punching the crap out of someone in a smashed-up bathroom. If Moon Knight was trying to avoid any Batman comparisons, this is the part where it fails a bit – the extended shot hints at a much darker tone than anything the Marvel Cinematic Universe has attempted to date, and is a little reminiscent of Robert Pattinson’s Dark Knight taking his rage out on some hoods in the first teaser for The Batman last year.

At this point, another actor takes over from Isaac in the trailer. “The voice in your head, it devours you.”

The closed captioning only identifies this voice as “Man”, but come on, we know Ethan Hawke when we hear him, right? The beloved Training Day and Sinister actor is reportedly the big villain of this show, and says he’s based his character on notorious cult leader David Koresh.

It’s unclear who Hawke is playing in that brief voiceover, but rumors have been swirling for a while that it’s none other than Dracula. Or at least, a prominent bloodsucker in this universe!

Marvel is hard at work on the more supernatural corner of the MCU in Phase 4, with a Blade reboot on the way, Kit Harington’s potential Black Knight introduced in Eternals, and Gael García Bernal just seemingly cast as Werewolf By Night for a planned 2022 Halloween special, so although the prospect of Hawke playing a dark supernatural creature is both ludicrous and completely unconfirmed, it would indeed track!

Later in the trailer, we get to see Moon Knight in his more 90s-esque costume, jumping from building to building in a great leap, and eventually rising from the tail end of what looks like a traditional MCU superhero landing elsewhere. Florence Pugh’s Yelena Bolova would be rolling her eyes at this, no doubt.

We’ve touched on Marc Spector’s different comics identities above, but there’s still a lot we don’t know about how they have been adapted for the Moon Knight series.

Khonshu and Spector often have a tumultuous relationship. Sometimes, it’s suggested that Marc is just mentally ill, and that there is no Khonshu. Sometimes, Khonshu is revealed to be an actual presence. And at other times, Khonshu is absolutely real despite Marc’s mental illness.

It appears that this show intends to explore the nature of Marc’s relationship with Khonshu, and perhaps with his other identities, too. Hearing Isaac speak with that baffling British accent may lead you to believe one of Marc’s new identities is a soot-smeared chimney sweep of some kind, but as far as I’m aware, none of Spector’s alternate comics identities are British. Feel free to correct me if I’m wrong! I mean, at one point his other identities were Captain America, Spider-Man and Wolverine! Moon Knight is a wild character! Anything’s possible.

We don’t yet know if we will get to meet the likes of Steven or Jake in the Marvel series, or whether the creators have started from scratch and built other identities for Marc Spector. Whoever else might be helping him on his path to becoming Moon Knight will remain a mystery for now.

James Gunn’s Plan for DC Video Games Sounds Awfully Convoluted
Pizza Tower Is the Best New Wario Land Game We’ll Probably Ever Get
HBO’s The Last of Us: The Changes to Bill’s Story and the “Parallel Universe” of TV
The Last of Us: Are the Infected Actually Zombies?
New Batman and Robin Movie, Green Lantern TV Show, and More Announced for Revamped DCU