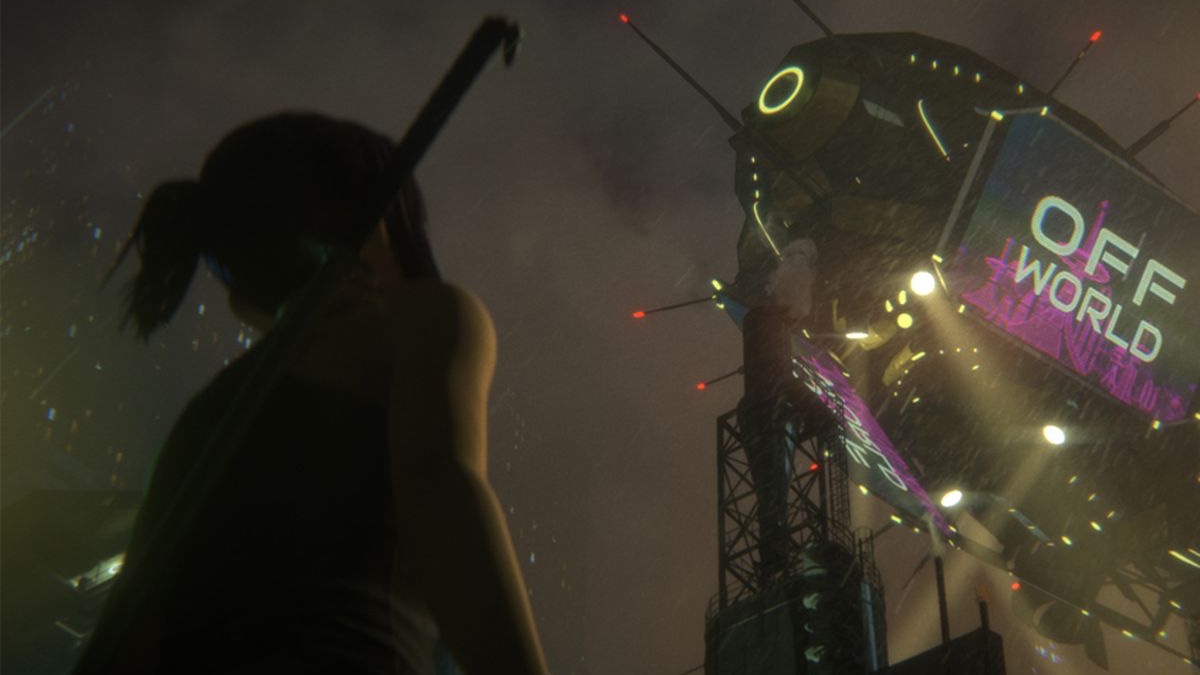 The rainy and foggy world of Blade Runner is about to get a little clearer. With the new anime series Blade Runner: Black Lotus, several pieces of narrative connective tissue link the anachronistic world of “2019” with the future we saw in the film Blade Runner: 2049. While Black Lotus on Adult Swim is very much intent on telling its own story, and focusing on specific Replicants and Blade Runners unique to this series, it’s also doing some impressive heavy lifting in the world-building department.

Here are the various ways that the first two episodes of Black Lotus connect the continuity of 1982’s Blade Runner with 2017’s Blade Runner: 2049.

What Happened After the Black Out?

Aesthetically, Black Lotus walks the line between looking like the classic film and looking a little more like the world Ryan Gosling’s Agent K inhabited in 2049. The mash-up works, mostly, and you certainly get the sense this version of LA is a little more lawless than where we’re at in 2049.

The Origin of Doc Badger

In 2049, Agent K enlisted the help of Doc Badger (Barkhad Abdi), a pawnshop owner who helped K figure out the origin of the tiny wooden horse toy. Doc Badger’s backstory wasn’t that extensive but in Black Lotus, Abdi is back voicing the character for the English dub of the new anime. In Black Lotus, Doc Badger is obviously a bit younger than he was in 2049, but we also learn that his ability to operate freely and obtain anything — even animals — partially exists because a rogue Replicant, Elle, helped him best a crime syndicate. In other words, Black Lotus suggests Doc Badger may have some sympathy for Replicants, which puts a new light on his dealings with K in 2049.

In 2049, we learn that the Tyrell corporation basically went bankrupt, and was absorbed by the Wallace Corporation sometime in the 2020s. The primary dealer of Replicants in 2049 is Niander Wallace, played by Jared Leto. But, in Black Lotus, we meet Niander Wallace as a much younger man. At this point in the Blade Runner timeline, Wallace’s father — Niander Wallace Sr. — is actually running the Wallace Corporation. This means that we possibly might see the moment when Wallace Corp officially takes over Replicant production from Tyrell. In the first two episodes, it’s not made clear. But, the elder Wallace does have ties to Senator Bannister, who, as we learn, was hunting Replicants for sport.

The Replicants Before The Nexus 8

The primary plot of Black Lotus seems specifically focused on an entire era of Replicants who existed in between the events of the original film and 2049. Like many other Replicants, Elle isn’t really aware of her true origins, and the audience actually isn’t sure what kind of Replicant she is. Does this generation have longevity the way Rachael did? Is Elle the forerunner to the Nexus 8 Replicants we see in 2049?

By the time of 2049, some Replicants, like Officer K, have been incorporated into the Blade Runner units to track down other Replicants. In Black Lotus, at the very end of episode two, we seemingly meet one of the Blade Runners from the era of 2032. But is he also a Replicant? Or is he human? The rest of the episodes in Black Lotus may hold the answers to some of these questions. But, because this is still Blade Runner, we should probably expect that some of our questions might be lost forever, like tears in the rain.

SHAZAM! FURY OF THE GODS – Official Trailer 2
Pizza Tower Is the Best New Wario Land Game We’ll Probably Ever Get
Is This Succession Character Harboring a Painful Secret?
Snowpiercer, Infinity Train and Other Erased Streaming Series You Can No Longer Watch
The Sandman | Comic to Screen: Hob Gadling | #Shorts