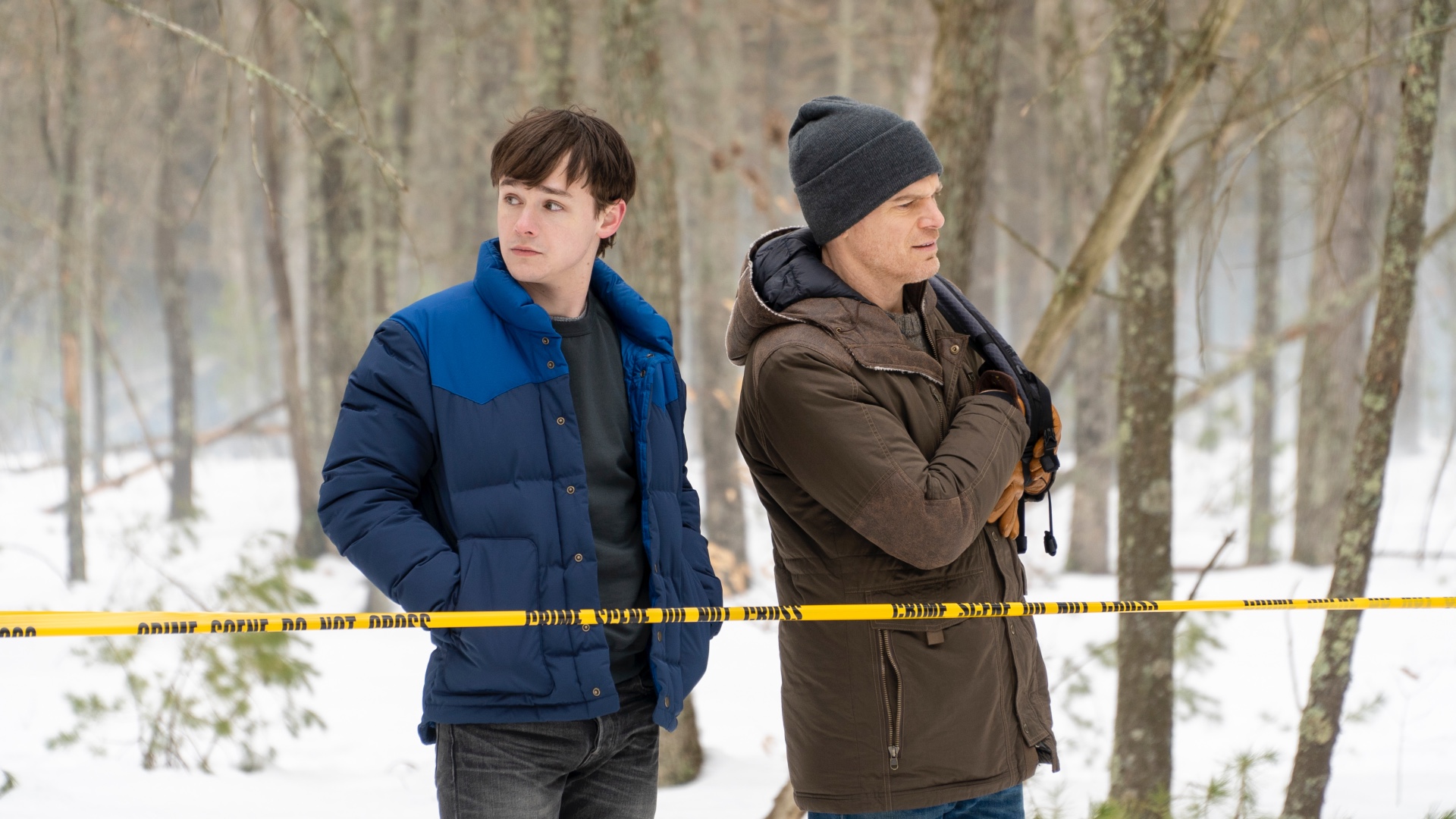 For a guy who’s supposed to be laying low, living under an assumed identity to avoid being recognized, caught, and convicted as a prolific serial killer, Dexter Morgan sure picked a hell of a love interest to get involved with.

If it’s not bad enough that the ever-awkward former blood analyst embedded himself in town so thoroughly that even the natives on the nearby reservation are on a first name basis with “Jim,” Dexter also had to cozy up to a chief of police that has already proven to be far smarter than the inept employees of Miami Metro. Dexter’s closeness to Angela and Iron Lake’s police department may have its benefits — he’s given free rein to clean up after himself following Matt Caldwell’s disappearance and subsequent search party — but it’s risky behavior for a man who should be a little more under the radar.

Joining the local bowling team and rolling a 300 is the opposite of under the radar. That’s how Dexter’s estranged son, Harrison, finds him. After Hannah died of pancreatic cancer and left Harrison to bounce around from foster home to foster home, the former blueberry pancake loving moppet began searching for his missing father. With a trip to Oregon and some internet sleuthing, Harrison tracked Dexter down and now he wants answers. Why did Dexter abandon him? Why did he fake his death? Why did he give up sunny Miami for the wintery Iron Lake?

Credit to Harrison actor Jack Alcott for making these scenes work. While it’s always nice to watch Dexter squirm (which he gets to do plenty of with Iron Lake PD camped in his front yard, looking for the man that he hastily murdered), Alcott avoids going too histrionic with his performance. Harrison is clearly wounded, over-compensating for toughness, and mysterious. Clearly the son is as intelligent as his father, based on the scenes of him easily breaking into a locked cabin and slyly spying on the other teenagers, but there’s no real indication that there’s any darkness brewing inside him. Having Dexter overwhelmed with trying to be a father while attempting to get a read on the son that he doesn’t know is an interesting new dynamic for a show that feels like it’s aching to fall back into old routines.

Old routines like the Matt Caldwell investigation. Just like old times, Dexter can easily throw off the police from the inside, planting Matt’s glove, covering up blood tracks, and leading the police to the wounded deer to make it appear as if Matt killed the buck on reservation territory, then skipped town to avoid the legal trouble. Thankfully, just as it looks like Dexter is going to get away with things in all too convenient of a fashion again, Matt’s father Kurt (Clancy Brown) arrives to keep the search party going. Clancy Brown is an actor that screams Dexter Big Bad, but I have a feeling that he’s just a red herring or a simple thorn in Dexter’s side to distract us from real trouble. Then again, Matt did promise that Kurt would kill Dexter with his final breath.

Meanwhile, the girl that Angela bought a burger at the bar, who said she was attempting to leave Iron Lake, appears to be in imminent danger. She’s locked in what looks to be a hotel room, with someone watching on a video camera. Could she be trapped by billionaire Edward Olsen, who gives off ominous vibes when Angela comes to ask for his help searching for Matt? As of right now, he’s the most obvious suspect.

We also get more evidence that several indigenous women have gone missing in Iron Lake, with Angela’s daughter and a native referencing a girl named Iris. Dexter was never a show that was particularly graceful at slow playing plot developments, but I’m intrigued with how they’re slowly rolling this information out. Clearly, these two threads are connected, but as of right now, it’s unclear how.

While there isn’t a ton of meat on the bone in “Storm of Fuck,” it does have some good stuff happening, between Harrison, the slow build to a larger mystery, and Ghost Deb. While the appearances of Ghost Harry became laughable by the end of Dexter’s original run, with James Remar tediously reiterating exposition, Dexter: New Blood’s new and improved version with Deb is great. Instead of a disapproving, but easy to ignore voice of reason, Deb is a mocking, jarring presence that unsettles Dexter every time she appears. It’s a solid way to utilize Jennifer Carpenter and have her feel like a dynamic element of the story being told. I’m excited to see if the show will continue to give her such memorable appearances like this week with the bullet and the window.

So far, Dexter: New Blood is already far more competent than Dexter’s final seasons from a storytelling perspective, but it still is setting the table. Until we can determine what the show is trying to achieve with this new version of Dexter, it’s hard to gauge whether the revival is successful or even necessary. Still, “Storm of Fuck” feels like its moving in the right direction.