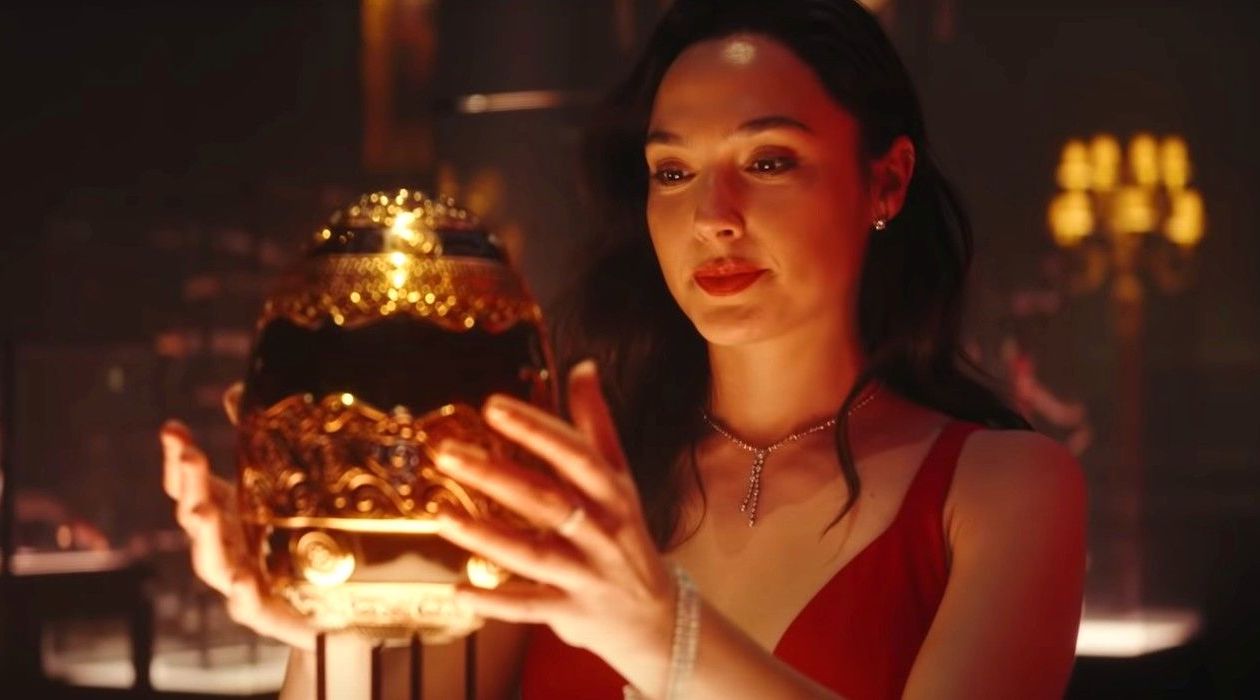 We meet them even before Dwayne Johnson and Ryan Reynolds can exchange their first quip, and well ahead of Gal Gadot’s big entrance: Cleopatra’s eggs, beautiful and bejeweled golden idols that apparently have driven fortune seekers mad for millennia. In Red Notice’s opening prologue, we are informed that these three diamond-encrusted prizes were gifted by Marc Antony to Cleopatra ahead of their wedding at the end of the Ptolemaic Dynasty’s rule over ancient Egypt.

Lost to the sands of time after Cleopatra and Antony’s deaths, and the fall of Egypt to Rome, these eggs were allegedly thought to be myth until the first was discovered in the 20th century… and then the last in the 21st by no less than Deadpool in a safari outfit. It’s an amusing MacGuffin for the film, which has caused many to ask if these lost treasures are real.

The short answer is: no, there is no such thing as Cleopatra’s eggs. However, these Ark of the Covenant-like MacGuffins are not entirely the stuff of some Netflix screenwriter’s fancy. While the story of Antony gifting Cleopatra with eggs is false, the idea of the enchanting great prize which drives movie stars mad is loosely based on a couple of real historical mysteries…

As the last of the Greek-descended Ptolemys to rule Egypt, and the last pharaoh, period, to rule the Upper and Lower kingdoms along the Nile, Cleopatra VII Philopater’s 21-year reign has been the stuff of legend, romance, propaganda, and even pure fantasy. Case in point: Cleopatra’s Eggs in Red Notice.

Cleopatra was the young woman who was able to persuade or seduce—depending on who you ask—Roman consul Julius Caesar to support her claim for the throne over that of her little brother/husband Ptolemy XIII. A brother who, it should be noted, met his death along the waters of the Nile after facing Caesar’s legions. After Caesar’s death, Cleopatra still insisted their son Caesarion was the Roman dictator’s one true born son and (eventually) heir to both Rome and Egypt. And by Horus, even Roman Triumvir and war hero Marc Antony backed that claim, siding with Egypt in a civil war against his rival and Caesar’s nephew, Octavian (future Augustus and first Emperor of Rome).

After Antony’s defeat at the Battle of Actium, Cleopatra and the Roman general’s fates were sealed with both eventually electing to die by their own hands rather than become political prizes to be humiliated and defiled on the streets of Rome.

Upon hearing news of Cleopatra’s death—as she died second, supposedly by taking a poisonous asp to her breast, although many historians speculate this method is apocryphal—Octavian became enraged to have lost his living prize who’d have been paraded in his Triumph back home. However, he did allow that Antony be buried with Cleopatra in her tomb with full rights befitting Egyptian monarchs. With that said, the Greek historian Plutarch asserted Antony was cremated upon a pyre, as was the Roman custom, and that his urn was buried in Cleopatra’s arms. Other accounts suggest that like Cleopatra, Antony was mummified in Cleopatra’s grand tomb.

Either way, the pair’s tomb, which was said to be erected in or near the city of Alexandria, has remained lost for over two thousand years. In the late 2000s, famed Egyptologist Dr. Zahi Hawass began speculating a tomb his team was excavating west of Alexandria was the long lost tomb of Cleopatra. The mummies of Egyptian and Greek nobles from the time of Cleopatra have been found at the site, as have coins depicting both Cleopatra and Antony’s personage. Yet the actual tomb of Egypt’s last Pharaoh remains a prize undiscovered by historians and archeologists.

The actual shape of the MacGuffin in Red Notice—which are depicted to be giant ornate relics of great wealth and power—are not Egyptian in design. Rather they look like Hollywoodized variations on the famous Imperial Eggs, or Fabergé Eggs, produced for the Russian tsars between 1885 and 1916. Also like Cleopatra’s reign, these treasures were borne out of an era now viewed through a tragic lens, as it was the last days of the Russian imperial family.

The eggs, which were designed by the company led by the famed Russian jeweler Peter Carl Fabergé, were ornate Easter eggs built out of precious metals like gold, platinum, or silver, as well as with various types of gemstones. In total 50 eggs were produced inside of 30 years, during the reigns of Alexander III and his son Nicolas II, the last of the tsars and Romanov rulers allowed to live until adulthood by Bolshevik Communist forces.

After the Russian Revolution saw imperial rule collapse across Russia in World War I, Nicolas II was forced to abdicate his throne. Nonetheless, in 1918 the Russian emperor, his wife, sisters, and three young children were escorted into a basement and executed by Bolshevik officers with handguns and bayonets—one of the empress’ sisters was meanwhile buried alive the following day.

During the mayhem of this tumultuous era, eight of the royal family’s prized Fabergé eggs went missing—and seven remain lost to this day. Likely the most famous of these is the Alexander III Commemorative Egg, gifted to Alexander’s son Nicholas II on Easter in 1909. It is the only still missing egg to have been photographed, albeit the black and white does not do justice to what was supposed to be a platinum egg trimmed with gold enamel and clusters of diamonds.

But (very loosely) like the movie, some lost eggs have been recovered. For instance, there is the Third Imperial Egg, which was gifted to Alexander III and his wife, the Tsarina Maria Feodorovna, on Easter in 1887. The bejeweled egg is built upon a stand made of golden lion figurines, and it is covered in sapphires. Once opened, it also reveals a clock. The egg went missing in the 1920s and wasn’t publicly rediscovered until 2013 when a man bought it at a flea market and originally intended to melt it down for its basic gold value until he discovered online it fit the description of one of the missing Fabergé eggs. He wound up selling it for millions. It is now in a private collection.

There are of course other influences on the silly MacGuffin in Red Notice, such as speculation about there being a hidden chamber in the upper regions of the Great Pyramid of Khufu on the plains of Giza. Digital and sonic mapping of the Pyramid might show there is another hidden chamber in the structure, although it currently appears impossible to ascertain for certain without doing damage to one of the oldest manmade structures in the world, and last of the Seven Wonders of the ancient world.

For what it’s worth, it would be highly unlikely Cleopatra—either her tomb or a “missing egg”—would be in such a chamber as is suggested by Red Notice. After all, Cleopatra, Caesar, Antony, and all the rest lived closer to our times and the creation of Netflix than they did to Pharaoh Khufu and the construction of his Great Pyramid!

Hogwarts Legacy Controversy Explained: Why Are People Boycotting the Game?
The Last of Us: How Long Does It Take to Beat the Games?
James Gunn’s Plan for DC Video Games Sounds Awfully Convoluted
FLASH FACTS | Official Trailer
How to Find a PS5 and Xbox Series X In 2023