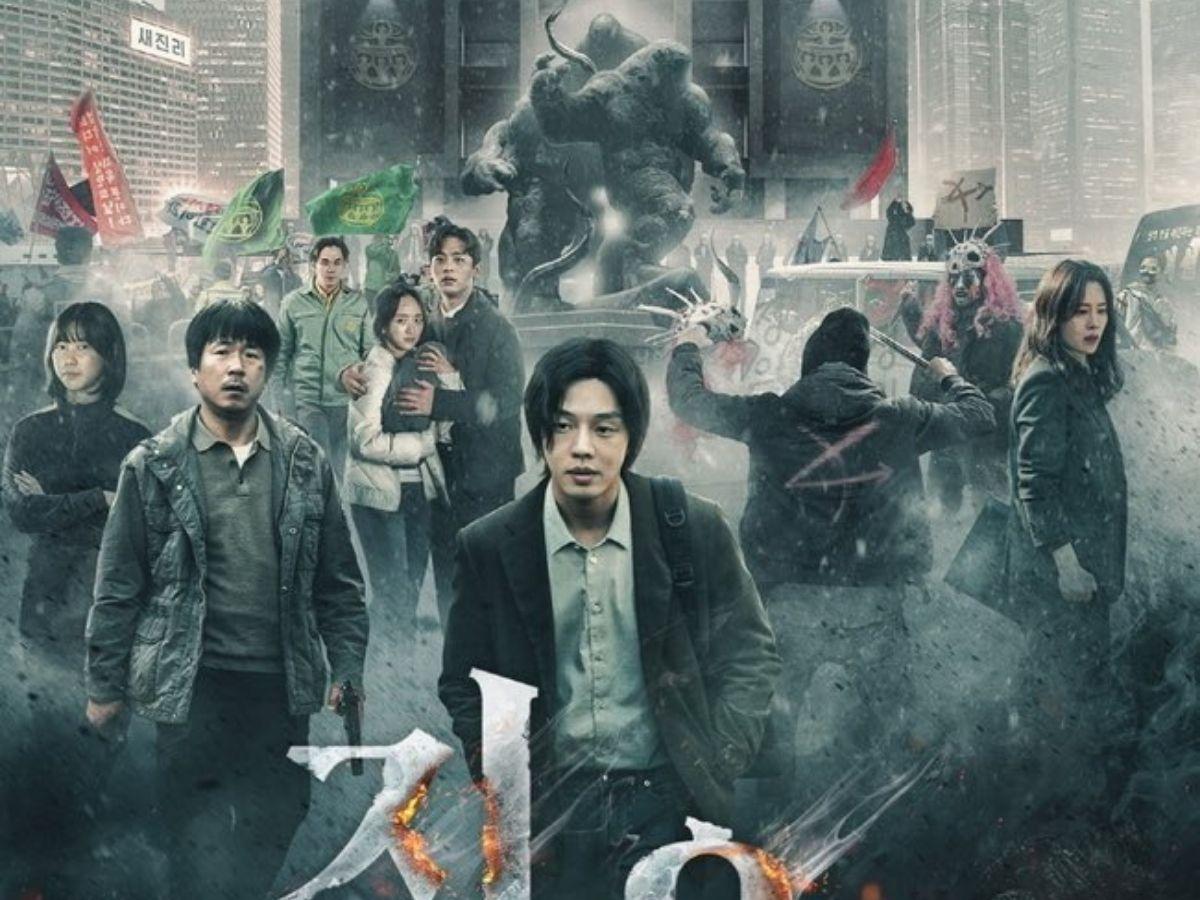 This Hellbound review is based on the first three episodes of the Netflix series. It contains minor spoilers.

We’re all going to die, but most of us don’t know when, how, or what will happen to us (if anything) after the inevitable event. This is a reality we all live with, and that much of modern life under capitalism actively encourages us to ignore. Hellbound, Netflix‘s six-part supernatural horror from Train to Busan director Yeon Sang-ho, asks: what happens when we are forced to face that reality, not only on a personal level but a societal one. It’s a particularly poignant premise in a world that has seen more than five million deaths from COVID in under two years, but it’s an inherently timeless one too, previously explored with similar intensity in standout series The Leftovers. Hellbound, which drops on Friday, does a superb job of exploring the difficult, topical question, often to horrifying results. In a week that will see the release of many much-anticipated shows—from Netflix’s Cowboy Bebop to Amazon Prime’s Wheel of Time—Hellbound is the very best.

How does Hellbound force its characters to face their own mortality en masse? Through something that looks a hell of a lot like divine intervention: In the series’ opening minutes (shown in the first trailer for the series), massive, Hulk-like monsters appear out of nowhere to chase a man through the busy, daylit streets of downtown Seoul. The monsters beat the man to death and then burn him to a crisp with their otherworldly powers. Then, they disappear just as mysteriously as they came, through a portal into what seems like another realm. As you might imagine, there are not only many bystanders to this event, but many of them film the horrific killing, with the footage going viral.

The first three episodes of Hellbound are less concerned with explaining how this supernatural event happened and more interested in depicting how different elements of society will respond. People are understandably terrified, and looking for answers that can fit into their understanding of the world. Traditional institutions—from law enforcement to broadcast media—don’t have them. We see just how in-over-their-heads the Seoul police department is by following world-weary detective Jin Kyeong-hoon (Yang Ik-june). Jin is one of the officers assigned to the Hapjeong Station murder, which is being treated as a “typical” killing rather than one perpetrated by demon-monsters. Jin and company look for an explanation as to how this tragedy happened, but are soon waylaid into dealing with the fear-driven harassment and violence that result from the phenomenon.

Into the space formed by society’s desperation for an explanation steps cult leader Jeong Jin-soo (Yoo Ah-in, in a standout performance). Chairman Jeong, as he’s known to his followers, is the 30-something founder and leader of The New Truth, a religious organization that has been following the monster-killings for more than a decade. Through Jeong, we learn that these killings come with a prophecy. Prior to the murders, the victims will be visited by a “messenger” who tells them of their impending doom. Literally a giant face will appear in the air, telling the victim both when they will die (it could be in five days, it’s could be in five years), and that they are bound from hell. Then, at the prophesied time, that death will come to pass. Jeong proclaims that these occurrences are acts of a god who has grown tired of waiting for humanity’s righteousness. He claims that those who have been chosen for “demonstrations” are sinners, and encourages his followers to uncover the sinful acts that have led to their condemnation.

Raised in a Catholic orphanage after having been abandoned by his mother, Jeong has serious Tom Riddle energy. He revels in his influence, and seems to enjoy manipulating people (especially Detective Jin) in the most brutal of ways, all while maintaining an air of detached, masculine civility that makes it difficult to call him out on his calculated cruelty. But he’s also the only person offering anything like answers, and he has gained devoted followers who worship him like a messiah for his teachings. (A subsect of his followers known as the Arrowhead have taken judgment into their own hands, targeting those they deem worthy of punishment and executing it.) Much of the tension of the first three episodes revolves not around what the mysterious monsters’ motivations are, but what Jeong’s motivations are, and what he is planning to do with his growing influence. The answer, which comes at the halfway mark of the series is both unexpected and recognizable, and spurs the series into its second half with new narrative energy.

Hellbound is often difficult to watch, both for its depiction of violence (multiple people are brutally beaten, sometimes to death) and its realistic portrayal of how masses of people can be spurred to hate, violence, and fanaticism. As with Train to Busan, the scariest parts of Hellbound are not the monsters (though they are very scary), but rather people who choose to turn away from their capacity to empathize and towards their ability to enact violence on one another. Unlike Train to Busan, Hellbound has even more time to tease out the process of how that can happen, which makes it even more terrifying to watch. In Busan, the zombie pandemic overtakes the populace quickly, leaving society very little time to dwell on what they will do next. In Hellbound, the horror comes with the time and space to organize and rationalize, which makes the choices to hate and kill feel more reprehensible and disappointing, even if those actions are driven by the same instinctual fear at play in Busan. In what is perhaps the script’s greatest strength, Hellbound recognizes the valid, real-world reasons for erosion in institutional faith that increasingly seems to shape our modern societies. It builds its depiction of the rise of fanaticism on the failure and inflexibility of the systems we’ve built.

I’m fascinated by auteur-driven projects that have a long, productive development process in the form of previous incarnations of the same story, or a long development period. Fleabag was a one-woman stage show performed by Phoebe Waller-Bridge before it became one of the best TV series of all time. Squid Game creator Hwang Dong-hyuk came up with the idea for the Netflix phenomenon 13 years before he was able to get it made and released. Hellbound is also a series with immense care and intention behind it; even if you don’t know that while watching the supernatural drama, you can feel it in every frame and line of dialogue. This in part surely comes from a probably inadvertent process of workshopping the story and world. Yeon, who got his start in animation before moving into live-action with Train to Busan, first visited this story-world in Jiok/The Hell;, an 11-minute animated short he released back in 2006. In 2019, Yeon returned to the world in the form of a Naver webtoon of the same name, which he co-wrote with Choi KyuSuk. Reading the comic after watching Hellbound is like reading a storyboard of the series, so similar are some of the shots.

So much of what makes it onto our screens is undercooked, and for understandable reasons. There is such a demand for content—especially as streamers like Netflix, Disney, and Apple look to gobble up new markets in their global expansion—that series often don’t have the time or other resources to execute a clear vision, if one even exists in the first place. Hellbound is an ambitious, terrifying show with the kind of specificity of intention that is rare in our saturated media landscape. It asks the kinds of questions few mainstream stories are willing to broach in any meaningful way, and its depictions of social horror will stay with you long after its monsters have faded from memory. That is my prophecy.

Hellbound will be available to watch on Netflix beginning on Friday, November 19th.

The Last of Us: Are the Infected Actually Zombies?
Dead Space Remake: How to Unlock and Survive Impossible Mode
How Did the Cordyceps Infection Start In The Last of Us Games?
Dave Bautista Has Talked to James Gunn About Future DC Movie Plans
Best Nintendo Switch Settings You Should Be Using